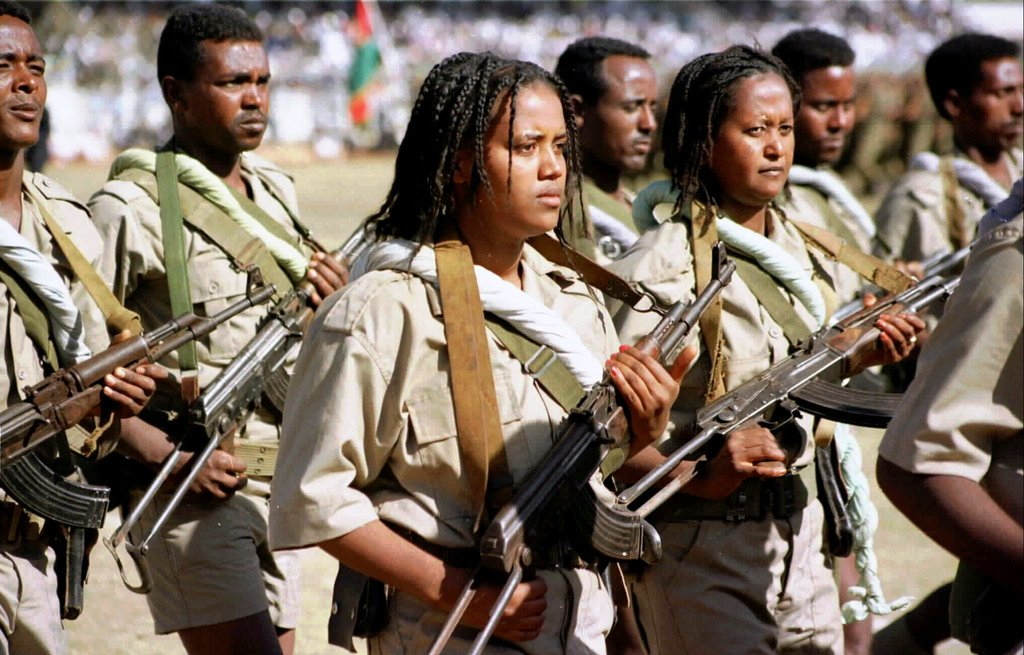 Eritrea’s independence struggle was largely a model of gender equality. But those days are long gone and there is still no sign of progress for women abused by military officers.

After years of international isolation, 2018 was significant for Eritrea, as it struck a peace deal with arch-rival Ethiopia. However, the agreement has disappointed many Eritreans as there has been no domestic progress, including revising an abusive national service program.

Since independence, President Isaias Afwerki and his regime have used tensions with Ethiopia as a pretext to justify universal military conscription beginning during the last year of high school. This prolonged conscription prompted such a flood of Eritreans fleeing military service that the country ranks ninth in the world as a country of origin for refugees, despite having perhaps only just over five million people, according to estimates.

An estimated 12 percent of the population has fled the Red Sea nation. Eritreans come just after Syrians for the number of refugee applicants in Europe and are the second-largest group arriving by boat. The largest factor driving Eritrean youth to flee is considered to be attempts to escape military conscription, which raises questions about conditions.

The rising refugee crisis, tied with the continued militarization of Eritrea, angered the Eritrean diaspora, sparking a social media campaign and opposition movement called ‘Yiakl’ (‘enough’). The campaign’s hashtag, #EndHighSchoolInSawa, is a reference to the Sawa camp where all Eritrean students are sent for a minimum 18-month military training. This compulsory enlistment has been criticized for entailing various human rights abuses, including prevalent sexual violence against female recruits.

In the U.S., women’s status during and after conflict was highlighted by World War II. Then, women stepped out of their expected roles—in particular, they took on traditionally male jobs—but were then usurped by returning men post-conflict. This phenomenon is highlighted in the extreme case of Eritrea. During the 30-year war for independence against Ethiopia (1961-1991), Eritrean women played a vital role in the struggle. They stepped out of traditional gender roles and mobilized for independence, including in combat: women made up over a third of the Eritrean People’s Liberation Front (EPLF).

However, Eritrean women’s role in the military, or Eritrean National Service (ENS), shifted dramatically after independence. Although they still serve, the circumstances are different. In the statehood era, the Eritrean military has become saturated with sexism, gender-based violence, sexual violence, subjugation of women, and abuse of power.

Allegations of sexual violence against women are prevalent in the ENS, as attested to by former fighters who have fled to Europe. These women detailed their experiences and observations in a study by African Studies Review.

EPLF opening its ranks to women was a pivotal moment in the genesis of gender equality in Eritrea, and the participation that followed was unprecedented. Women held positions in village councils and regional offices, and gained rights to vote and stand for office for the first time. But the greatest transformation of gender roles was the inclusion of women in the military.

During the long struggle, Eritrean women served in all capacities—including the frontline—except for the top leadership ranks. They performed in mixed units as guerrilla fighters. Ultimately, as widely acknowledged, emancipation would have been impossible without women fighters. This created a glorified symbolic image of the Eritrean warrior woman; exemplifying the grassroots aspect of the movement, the inclusivity, and determination for independence—“to fight on to the last man and, beyond him, to the last woman,” as Victoria Bernal put it in her 2001 paper, “From Warriors to Wives: Contradictions of Liberation and Development in Eritrea.”

Some women had been interested in liberation at the beginning of the ELF struggle. However, the movement limited their involvement to supporting roles. In 1970, a faction of ELF broke away to form the EPLF. It also began as an male-dominated movement, until three women attempted to join. They were accepted and given military training, which catalyzed the recruitment and incorporation of women into the movement. EPLF’s liberation aim was directly linked to achieving gender equality and female emancipation.

Gender equality was preached by EPLF. Under the slogan “Equality through Equal Participation,” it aimed to deconstruct gender norms in politics and at work. They defied culturally imposed roles by training women to work as carpenters, mechanics, and drivers; meanwhile, men in EPLF then took on traditionally female roles such as preparing food. EPLF’s aims to reform the roles of Eritrean women was done through treating them as equivalent to men, which included erasing femininity for female fighters. The nine tribes of Eritrea

However, the EPLF eventually implemented its own marriage law in 1977. The new marriage culture introduced by EPLF prohibited the rejection and negative stigma on non-virgin brides, defying cultural norms. They established marriage as an institution “the partnership of a man and a woman who are each free individuals exercising choice, a radical departure from the marriage practices of Eritrean communities.” EPLF also discouraged the negative stigma surrounding premarital sex, and went as far as providing contraceptives. The implementation of these new policies and cultures established a new freedom for women in Eritrean society.

Some authors such as Gaim Kibreab contest the notion that sexual violence was not prevalent during the EPLF era. Kibreab stated in a 2017 paper that “the old story that sexual abuse was unheard of in the EPLF is a myth” after interviewing a former EPLF fighter who reported that, “The men who abused us in the mieda [liberation struggle] are now abusing our daughters in the national service. The perpetrators are the same.”

To say that sexual violence was completely absent during EPLF would be a stretch as some former fighters confirm that it was present. However, the fight for gender equality under EPLF was evident; the movement is known for the rights and opportunities it provided Eritrean women for the first time. Moreover, enacting a policy that prohibited sexual relations was a clear attempt to work towards preventing sexual violence.

After the independence struggle, the first proclamation of the ENS was published in 1991. However, the law was not enacted officially until military training commenced in 1994. Article 8 required all Eritrean citizens between the ages of 18 and 40 to participate in compulsory military service. Women were not exempt from this requirement, despite protests from some communities.

Officially, the national service was meant to consist of six months of military training and twelve months of active service and development work. However, since the state’s second war with Ethiopia, from 1998-2000, the eighteen-month term of service has been flexible on the pretext that war could break out at any time.

Women are assigned to a commander who holds sway over them

It is critical to note that due to power dynamics, rape in the context of the ENS does not necessarily involve physical force. Because the perpetrators are generally commanders, they hold power over women who are coerced into sexual relations due to fear of punishment. Any ‘consent’ maintained through intimidation, pressure, or threats is illegitimate.

The majority of former female conscripts reported that sexual violence occurs in both the Sawa military camp and elsewhere in the ENS after the first six months. After that point, women are assigned to a commander who holds sway over them. The officers then make sexual advances on their inferiors. For the women able to say no, inhumane punishments occur.

Survivors of military service say those who refused sexual relations to a military leader endured punishments such as being locked in shipping containers and underground cells, exposure to extremely hot temperatures, beaten, tortured, denied leave, deprived of food, suspension from trees, sent to dangerous locations such as the front line, and other cruel and unusual punishments. This is persecution and European countries such as Norway have guaranteed Eritrean refugees asylum due to these circumstances.

Sexism in the Eritrean military is also seen in the enforcement of domesticity. Women in the ENS are subjected to tasks such as cooking, laundry, and performing secretary duties for military leaders. This, in conjunction with sexual violence, means the situation has been labeled as sexual slavery. Sadly, many women are discouraged from speaking out due to the “shameful” stigma around rape victims in Eritrea. Thus, military leaders are aware that many women will stay silent.

The prevalence of sexual violence in ENS is an example of the forced imposition of domesticity and attempt to revert to traditional patriarchal societal roles in the post-conflict era. During conflict, women are treated equally because help is desperately needed; after it ends, men abuse their power, returning women to domestic roles and reasserting the patriarchal system.

Gaim Kibreab analyzes how feminist theorists argue that women are only used in the military for the duration of the conflict. He refers to how theorist Cynthia Enloe uses the cases of Algeria and Zimbabwe, in which the dynamics between men and women, and emancipation of women’s participation, only occurred due to the urgency of warfare and prominent nationalism. Once over, attempts to subjugate them by putting them back into traditional roles occurred.

However, in a nation where rule of law is absent, the post-conflict environment cannot be the only factor attributed when analyzing sexual violence in the ENS. Eritrea has still failed to implement its 1997 constitution, and its highly authoritarian regime means it’s ranked as the most censored country in the world. In a country without democratic and functional legal institutions, there is no avenue to campaign against the rampant sexual violence by military officers.

To address the abuse of high school students in the military, Eritrea, which has not held elections since independence, must introduce constitutional democratic government, including freedom of expression protections. In a bid to not become dependent, the country has rejected foreign aid in the past, reducing external leverage. UN sanctions were lifted after nine years of diplomatic isolation, the peace agreement with Ethiopia being one of the contributing factors.

Prime Minister Abiy Ahmed’s Nobel Peace Prize has attracted strong criticism from Eritrean activists because the agreement has not brought peace within their country. Tensions with Ethiopia have long been used as a justification for military conscription, yet mandatory enlistment has not ended despite the deal.

Charting a way forward for Eritrea
President Isaias Afewerki's rule, once all but unchallenged, is now questioned from all quarters. Can Eritreans chart a way forward?

Moreover, striking up a relationship with Abiy has allowed Isaias to resurface on the international stage, re-legitimizing him. Many Eritreans are concerned as to how this may affect their asylum applications, or whether it will make them more vulnerable to deportation, something that Abiy himself has allegedly encouraged. A lower court in Israel declared that Eritrean asylum seekers can be deported, and the recent peace deal was cited as one of the reasons to not allow Eritreans to stay.

It is inadequate to discuss a peace agreement with Eritrea without addressing the issue of military conscription. In addition to widespread sexual violence, other abuses are also prevalent in the military. The Global Slavery Index has described it as modern-day slavery when Eritrean youth are forced to work in harsh conditions with little or no pay. The UN has also described the indefinite military service as mass enslavement.

The regime is traumatizing an entire generation. This past year, young Eritrean refugee Osman Ahmed Nur, along with three of his friends, killed themselves in the U.K., partly out of fear of being sent back home as Osman was imprisoned and tortured there as a child. The idea of returning to Eritrea’s abusive conditions is evidently something that continues to haunt those who have escaped.

Aug 19, 2019 Ethiopia and Eritrea’s peace must be rooted in past

Jan 17, 2019 Is Tigray really a drop in the bucket for Abiy’s administration?

Hiba is an Ethiopia Insight editor and a Research Assistant at Georgetown University African Studies Department.