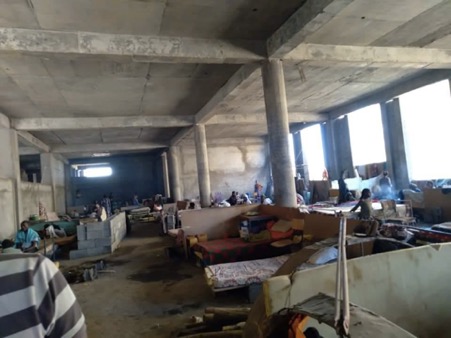 After I left the capital, I witnessed wanton killing, looting, and destruction.

I fled Mekelle just days before the Ethiopian and Eritrean defense forces were to take the capital. Many residents fled the city in fear of fighting and threats of indiscriminate shelling that had occurred as the occupying forces took hold of other cities.

I went west towards Tembien, then to Adet, going from village to village on foot for two months. Initially, the soldiers were primarily on the main roads, so we stayed in the most rural areas, as far away as possible. But soon enough, no village, no matter how remote or difficult to reach would escape the wrath of the occupying forces.

Eritrean and Ethiopian forces engaged in the widespread killing of civilians; they would randomly shot and loot, mainly livestock such as chickens, cows, and animal products such as honey.

After Eritrean and Ethiopian forces controlled a small town, nearby I met one farmer who told me that he was coming back to town after moving his livestock deep in the bushes to save them from being slaughtered by the soldiers. He explained that farmers that didn’t manage to escape the small city and its surroundings when it fell to the Ethiopian and Eritrean forces were doomed to have all their livestock (cows, oxen, goats, sheep, and chickens) slaughtered, emphasizing his good fortune.

It was not just food that they took. They stole the clothes of farmers, their mattresses, and even cooking utensils. I also witnessed Eritrean soldiers taking jerrycans, plastic containers that people use to store water. Perhaps to deprive farmers of accessing water.

The soldiers used big trucks with Eritrea license plates to load looted goods. I saw many empty trucks with ER plates being driven towards central Tigray, and loaded trucks leaving towards Eritrea via the direction of Adwa and Axum.

The fact that many Tigray forces left all the towns and villages made it easy for the Eritrean soldiers to come in and loot.

As far as I witnessed, it seemed like Eritrean soldiers came fully prepared to loot from the offset. The looting was not something of an afterthought on their behalf. Rather, they came equipped with strategies and tools.

They brought car mechanics with them to help them unlock cars, Sino trucks, and dozers. They took away some vehicles and burned others after taking out all the valuable items inside. I saw Eritrean soldiers doing this countless times across central Tigray.

Sadly, Ethiopian soldiers were idly watching the Eritrean soldiers as they did all this. Worse, some were praising them.

Cities in Central Tigray have now become ghost towns as residents run off to villages trying to escape occupying forces. It had been over a month since the end of the surgical ‘law enforcement operation’ to capture currently active leaders of the state as well as their predecessor—but the cities and town of Tigray are still as deserted as ever.

Once the center of trade, exchange and hope they are now the scene of war crimes that can never be fully articulated or persecuted, but live on through the deep scars they have left on the survivors.

I have seen Ethiopian soldiers trying to sell the smartphones they stole from residents of the town to other soldiers. You can easily identify the Eritrean soldiers by their uniforms and their ‘Congo’/ ‘Shida’ shoes.

Destruction of property—as with looting and murder—was widespread.

The soldiers would kill or ruin basic possessions such as animals, food, and other items. In Wukro, for instance, a relative of mine told me that Ethiopian soldiers put Omo detergent inside her food and her stored wheat so that they spoiled. Her case was not an exception. After entering people’s houses, it was typical of the occupying forces to take what they can and ruin the rest.

The relative told me her store was completely looted. Ethiopian soldiers stayed in her house for days, drinking. All her food was spoiled, her belongings taken, and she is currently struggling to survive along with her children. In another village, residents told me that the soldiers would squash chicks under their feet. It was and continues to be a mission of spite and destruction intended to break the people of Tigray physically and spiritually.

In Wukro, around 50 kilometers north of Mekele, the relative told me that six people from one household were killed. They spared one person. In what appears to be an attempt to create terror; sparing one member of the family after killing others so they can tell the harrowing stories of their assault.

The war on Tigray: A multi-pronged assault driven by genocidal undercurrents
By Gebrekirstos Gebremeskel

In the towns of central Tigray, they mostly killed men, going house-to-house. In villages, they would kill both men and women. In one village near Wukro, they tied a grandfather and grandmother together and then killed their grandson right in front of them.

My relative in Wukro told me that they killed 16 people near her house. Furthermore, she shared with me a story of a woman whose husband was murdered and then denied the women the chance to take the body for burial. She stayed with his body for two days, mourning alone, keeping guard of her husband’s corpse.

There were so many incidents where dogs and even hyenas ate the remains of slain people. Some young men in Wukro put the bodies in carts and took them to a nearby church to bury them in open spots. This was a risk to their lives as soldiers didn’t allow proper burial. Four people were killed by either Ethiopian or Eritrean soldiers in Wukro for attempting to bury the bodies.

The Eritrean soldiers said they were ordered to kill any male over the age of 14. According to a soldier, the order they received from their superiors was to kill those who “pee against the wall”—a reference to men.

I learned the above through a dad of my relative’s friend who, along with his daughter, was hiding in a village. His Tigrinya had an Eritrean accent as a result of living in Eritrea, which helped him befriend an Eritrean soldier in the town engaged in looting.

Over tea, the Eritrean soldier said that people in Tigray should be grateful as they were being kind by not killing children. He also said, “we will make you eat each other.”

In Axum, Eritrean soldiers killed people by going house-to-house. A priest at Maryam Tsion Church told my friend when he visited him that they buried 243 people that day alone. The bodies were ordered not to be picked up and, again, people were shot for trying to collect them.

Regardless of political affiliation, almost everyone in Tigray is against these atrocities. The anger and resistance from Tigrayans is not a result of supporting TPLF, nor does it stem from holding some political position. When a group is killing families, raping women, and threatening people’s livelihood, that group is an enemy, and the victims are not left with any other option but to resist. This is what many Tigrayans feel about the Ethiopian and Eritrean forces.

Most atrocities in rural areas, which are probably worse than in the towns, have not been reported yet. Due in part to the media and access blockage, I don’t think humanitarian workers understand the gravity of the situation. I also don’t think anyone except the Tigrayans going through it know enough about what appears to be a genocide in the making.

I was reading a book on the Rwandan experience entitled “Left to Tell: Discovering God Amidst the Rwandan Holocaust” I can’t help but relate it with all that’s currently happening in Tigray. But, as Rwanda rebuilt, so will Tigray.