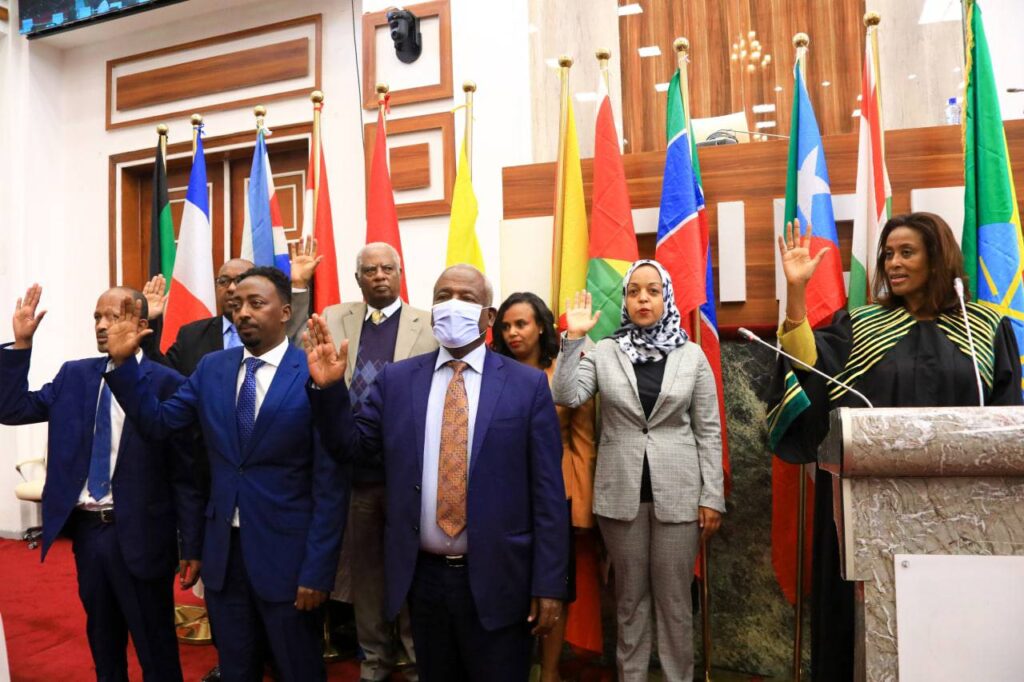 After dragging its feet for over three years in the face of repeated calls by various opposition parties, the Ethiopian government has finally made a crucial move to initiate a National Dialogue. On 29 December, the federal parliament approved a proclamation to establish a commission to oversee the process.

But, vital questions remain: Is the ruling Prosperity Party (PP) genuine about positive change or will it attempt to use the process as a way to consolidate power? Also, why did the government show openness to National Dialogue now?

In his inaugural speech on 2 April 2018, Prime Minister Abiy Ahmed promised the Ethiopian people that he would lead them to democracy. He underscored that there would not be a single gunshot and pledged that Ethiopians would enjoy peace and prosperity.

With his charisma and rhetoric, he won the hearts of millions. Unfortunately, that euphoria was short-lived.

Fair and free elections failed, as Abiy’s government cracked down on the opposition. This caused major political parties in Oromia such as the Oromo Liberation Front (OLF) and Oromo Federalist Congress (OFC) to boycott elections that were eventually held in June 2021.

With the war in Tigray, which led to elections not being held in that region, it was clear that there was no strong opposition that could stand in the way of Abiy’s PP.

Indeed, in what could have been described as a solo-run, PP won more than 90 percent of seats in the federal parliament and regional councils. Far from achieving the long-sought consensus in Ethiopian politics, the election itself became another source of discontent.

Conflicts, displacement, detention, and arbitrary killings became the order of the day in Oromia.

In Tigray, the civil war that erupted in November 2020 brought the country to the gates of hell. In what was unprecedented in modern Ethiopian history, the federal government invited another country’s military—Eritrea—to invade one of its regions. Unspeakable atrocities at the hands of Ethiopian, Eritrean, and Amhara forces were hallmarks of the war.

Associations with countries like Iran and Turkey to acquire drones that have led to the death of hundreds of civilians further damaged the Ethiopian government’s standing with the U.S. and its allies.

The US is pushing for peace in Ethiopia, but it needs to do more
by Mulugeta Gebregziabher

Mounting pressures as the result of the unwinnable war, economic challenges, and diplomatic isolation forced the government to reluctantly accept a National Dialogue that has been called for by opposition parties for some time.

Its success, however, depends on how genuine the government is. If Abiy’s administration is planning on using the National Dialogue as a ‘fig leaf’ and not engage in it in good faith, it is doomed to fail.

With this in mind, it is useful to analyze the National Dialogue process so far using internationally accepted yardsticks.

First and foremost, a successful dialogue requires that the custodian is neutral. It is this body that plays the essential function of deciding on the objectives, participants, agenda, and structure of the process. Accordingly, for the dialogue to be legitimate, the custodian must build trust among participants by being neutral.

A National Dialogue has three phases: preparatory, process, and implementation. Each of these phases reinforces or undermines the other. Experiences of countries such as Poland and Iraq show the significance of forming neutral working groups or committees during the preparatory stage.

A working group is needed to draw a roadmap that may include rules and regulations, institutional arrangements, and objectives of the dialogue. It will consist of members of the opposition, government, civil society, international bodies, and so on. It is a stepping-stone for consensus-building, which guarantees the process’s neutrality, legitimacy, and dependability.

This working group will relinquish its duties when a formal body, such as the National Dialogue Commission, is established.

On the contrary, right from the start, the neutrality of the Ethiopian National Dialogue Commission has been in question. It came into being without consensus-building among political parties and other stakeholders.

The draft proclamation was prepared by the Council of Ministers, a core part of the executive. Later, it was enacted by parliament, a body controlled overwhelmingly by the ruling party. Thus, the commission’s formation was not neutral.

Inclusiveness ensures the legitimacy of a National Dialogue. It provides an opportunity for all stakeholders to own, protect, and promote the ideals and decisions of the process. And that inclusiveness must exist since the beginning—starting from the initial formation of committees.

Ethiopia is chronically divided along ethnic, religious, and political lines, which is why a National Dialogue is essential. There are fundamental differences over its history, national emblems, system of government, and so on.

A meaningful process should ensure the participation of all views. However, opposition parties were not given a chance to draft and sufficiently comment on the draft proclamation.

In a 14 February letter to the government, the Ethiopian Political Parties Joint Council (EPPJC) said their demands for discussion and inclusion of their comments on the draft proclamation were declined.

They wrote that “in a complete disregard of the role of political parties, and the principle of inclusion and participation, which are the cornerstone of successful national dialogue, and without reaching on any form of consensus, the parliament went ahead and approved the proclamation.”

Likewise, the other three major opposition parties with considerable support in Oromia and Somali regions also spoke out. OLF spokesperson Lammi Gammachu said that his party does not know “what the national dialogue is all about” and that they were “not invited.” In fact, many of the leadership of the OLF are still imprisoned, while chairman Daud Ibsa has been under house arrest for around a year.

Ogaden National Liberation Front (ONLF) leader Abdirahman Mahdi’s comment summarizes these problems: “What we see is a one-party affair that is not representative…Thus, the hope of starting a genuine dialogue that could find a viable solution to all injustices and political quagmire in Ethiopia is in jeopardy.”

Such exclusion undermines the process. Major stakeholders have been denied the opportunity to assist in drafting the proclamation and nominating the commissioners. This sidelines the ideals that those who have been excluded—and the public who support them—have embraced for years. This is a damaging repeat of past failures in a country where political exclusion by the incumbent has been a norm.

Inclusion and neutrality alone cannot guarantee a legitimate and successful National Dialogue. The stakeholders and the public at large need transparency. Transparency is paramount at every step of the process. Public outreach programs and consultation must be availed to citizens across the country, while the media should meticulously cover every single step.

The current dialogue process, however, is opaque. The major political leaders have requested for the process to be more transparent, including through a letter to the Prime Minister by OFC. So far, these efforts have been to no avail.

The public does not know how exactly the public supposedly nominated 632 people to the commission nor how 42 were shortlisted before parliament made its selection of the final 11 commissioners.

One of the failures of the transition has been the government’s overbearing management of it. Ethiopia should have conducted a National Dialogue right at the beginning of the transition, as some opposition parties called for. The current situation, and the hurdles to success, are the result of the Abiy administration’s exclusionist approach.

This follows the unconstitutional extension of term limits and reckless decision to conduct the June 2021 elections that exacerbated the tension between the ruling party and the excluded opposition, whether jailed or, in TPLF’s case, at war with the federal government.

To make matters worse, the government also opted to resolve political disagreements in Oromia through military means, just as it did in Tigray.

The National Dialogue process we see now is not genuine. It instead reflects more political manipulation to buy time and silence the external diplomatic pressure before starting another round of war in Tigray and Oromia when the time is ripe.

The battle in Oromia between the Oromo Liberation Army (OLA) and government forces has already reached a point of no return. Consolidation and expansion by OLA has engulfed a huge swath of territories, rallying peoples and communities within its reach. No viable political process, such as dialogue, is imaginable in these areas.

In Tigray, hostilities are not resolved, and there is little chance for the TPLF or other group that could represent Tigray—a region with 38 empty seats in the House of People’s Representatives—to be part of the National Dialogue.

Without the inclusion of these two warring parties, the process is a futile exercise if its aim is to resolve conflict. In fact, if anything, as a result of the war and also the public support the OLA and TPLF enjoy, the whole National Dialogue process arguably should have focused on the issues driving those two conflicts.

At this moment, the only viable option is to implement the international community’s recommendations: cessation of hostilities, ceasefire and peace agreement, humanitarian assistance, the release of political prisoners, and the initiation of a meaningful inclusive process of broader negotiation.

A satisfactory National Dialogue is highly unlikely while war is raging and major opposition leaders are sidelined or in jail. Peace is the essential precondition for a successful National Dialogue.

Buli studied in Norway. He is the director of a research, consultancy, and training institute, and also consults international organizations. He can be reached at buliedjeta@gmail.com