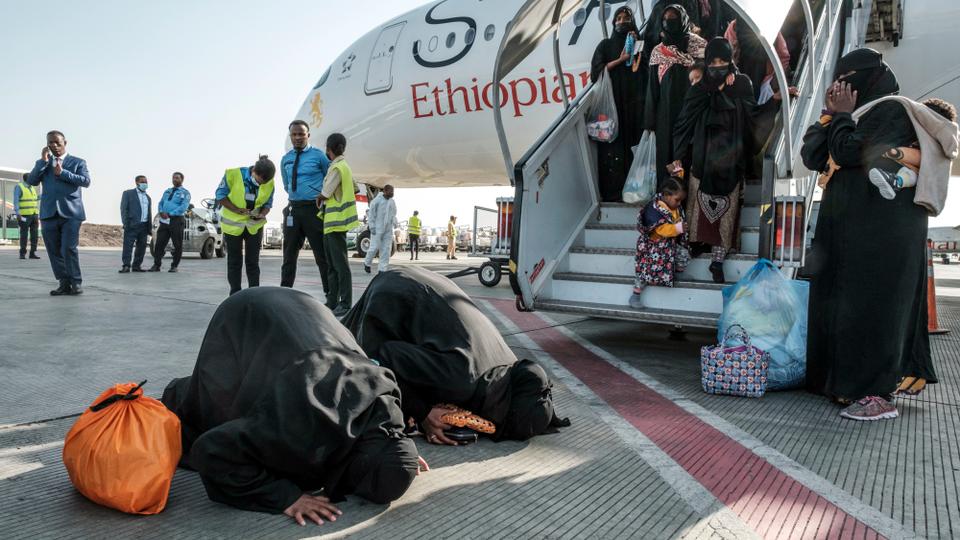 Thousands have returned home, but many are still suffering, and so are their families.

Bethelehem, an Ethiopian migrant who has lived in Saudi Arabia for six years, recalls her experience dealing with the local police by saying, “building any kind of trust with law enforcement is nearly impossible.”

She was part of a group trying to calm a heated argument between two fellow Ethiopian migrants that took place around Abdullah Al Kharji in Riyadh in 2020. The police eventually arrived—but they only managed to escalate the situation.

“They turned their sticks on us, and fiercely attacked us. I had blood coming out of my nose and mouth. We all were arbitrarily arrested. I was terrified. Here, the truth carries less weight and there is a possibility of losing your life because of these attacks,” she said.

Currently, more than 750,000 Ethiopians are estimated to be living in Saudi Arabia. According to the International Organization for Migration (IOM), roughly half a million of them have entered the country illegally. And since they don’t have a residency permit, they are forced to hide from the police.

In recent years, Saudi authorities have intensified their crackdown on these Ethiopian migrants, in part due to the new policy of ‘Saudization’ which is aimed at increasing the number of Saudi nationals in the workforce.

Home raids and arbitrary arrests are becoming more common, and are accompanied by harassment, excessive use of force, and physical violence.

Thousands of African and Yemeni migrants are currently detained. Once arrested, the conditions for the migrants in detention centers are horrific.

Abdulrahman, a detainee who requested we do not use his real name, has been detained at the center for over five months. Apart from lacking a valid visa, Abdulrahman said there is no clear reason for his detention.

He told us that guards in the facility frequently subject detainees to beatings, torture, and other inhumane treatment. “Prison guards beat me and harmed my left hand after they caught me with a phone,” he said.

A recent crackdown by Saudi authorities was reportedly designed to prevent the deplorable conditions of detained Ethiopian migrants from being broadcast to the world during the holy month of Ramadan.

Mass searches of the centers were conducted to confiscate phones and any other recording devices, while police have ordered people set for deportation to sign non-disclosure agreements forbidding them from detailing their experiences to journalists.

Explaining how and why he came to Saudi Arabia, Abdulrahman told us, “I didn’t even have enough money to come to Saudi Arabia. I borrowed money from my uncle to come here. I have two sons at home; I just wanted to make it better for my family. Just after half a year of working in Saudi, I was arrested. What has been happening is the reverse of what I had expected.”

He noted more than 120 people are currently being detained in the room he is in, which is extremely overcrowded, filthy, and disease-ridden.

“Some of us are sick, there is not enough food or water here. It is a very devastating situation, yet the guards keep silent about it. We had a prisoner who passed away in his sleep,” Abdulrahman said.

Making things worse, most family members of the detainees do not know much about the condition of their loved ones. “The sad thing is that [detainees’] family members back home often don’t know whether they are alive or dead. They haven’t been in contact with them. It doesn’t look good at all. You only wish to die rather than be in this condition,” Abdulrahman said.

In Ethiopia, we spoke to a mother, Nezifa Abdulgafar, from Bale Zone in Oromia, whose son migrated to Saudi Arabia and has been missing since May 2020.

She recalls why and how her son, Mohammed Usman, left Ethiopia: “He needed extra money and wanted to move, but I refused and told him to stay here with me … I thought he went to his friend’s house after not seeing him for a week.”

Initially planning to go to Italy via Libya, he dialed her from Sudan asking for money to pay for his journey. After being caught, he changed route and went to Saudi Arabia via Yemen.

“A month later, he arrived in Riyadh, Saudi Arabia. Everything seemed alright until his phone stopped working. It has been two years—I haven’t heard from him since. I don’t even know whether he is alive or dead,” she said.

It is likely that Mohammed, who entered Saudi Arabia illegally around the time of an intensifying crackdown on immigrants, is detained.

We tried to contact his friends seeking more information on his potential whereabouts. Unfortunately, we didn’t get any promising updates.

Fatuma Tolosa, a 17-year-old student from Robe town in Bale, has a similar story.

She told us her entire family depended on the income her older brother earns in Saudi Arabia. Recently, though, he was arrested by the Saudi police and was forced to pay a ransom.

“My brother’s friends dialed me from Saudi Arabia and told me that my brother was arrested … He requested 75,000 birr to pay to guards so they release him. I didn’t hesitate the moment I heard this. I sent the money from what I saved using the money he gave us over the past couple of years,” Fatuma said.

“Time after time, government officials say there are talks between Ethiopia and Saudi Arabia. I think the Ethiopian government and media outlets need to at least pressure a little bit harder for them [Saudi authorities] to respect human rights and bring migrants home,” she added.

The Ethiopian government maintains that it is working closely with the Saudi government, as well as the IOM, to facilitate the return of its citizen from abroad. IOM says that Saudi Arabia has repatriated nearly 352,000 Ethiopians over the past four years.

In late 2021, Dina Mufti, spokesperson of the Ministry of Foreign Affairs, admitted that home raids and arbitrary arrests are happening and pointed out that an agreement between Ethiopia and Saudi Arabia to facilitate a reparation process is underway, which at the time had led to 42,000 Ethiopians returning home.

Ethiopia Insight did not get a response from either the Ministry of Foreign Affairs or the Ethiopian Embassy in Riyadh about the conditions Ethiopian migrants face in Saudi Arabia.

In a more promising development, since March of this year, the first contingents of an expected total of 100,000 Ethiopians have returned home.

Yet, Human Rights Watch reported in January that Ethiopian authorities have “detained, mistreated, and forcibly disappeared thousands of Tigrayans recently deported from Saudi Arabia.” Saudi authorities also continue to target primarily Ethiopians and Yemenis for detention, as more than 15,0000 migrants were detained in a single week in March alone.

Abreham Ketema lives in Addis Abeba and is interested in politics and culture. He has written for Addis Fortune, Awash Post, and others. Reach him at abrehamketemawin7@gmail.com