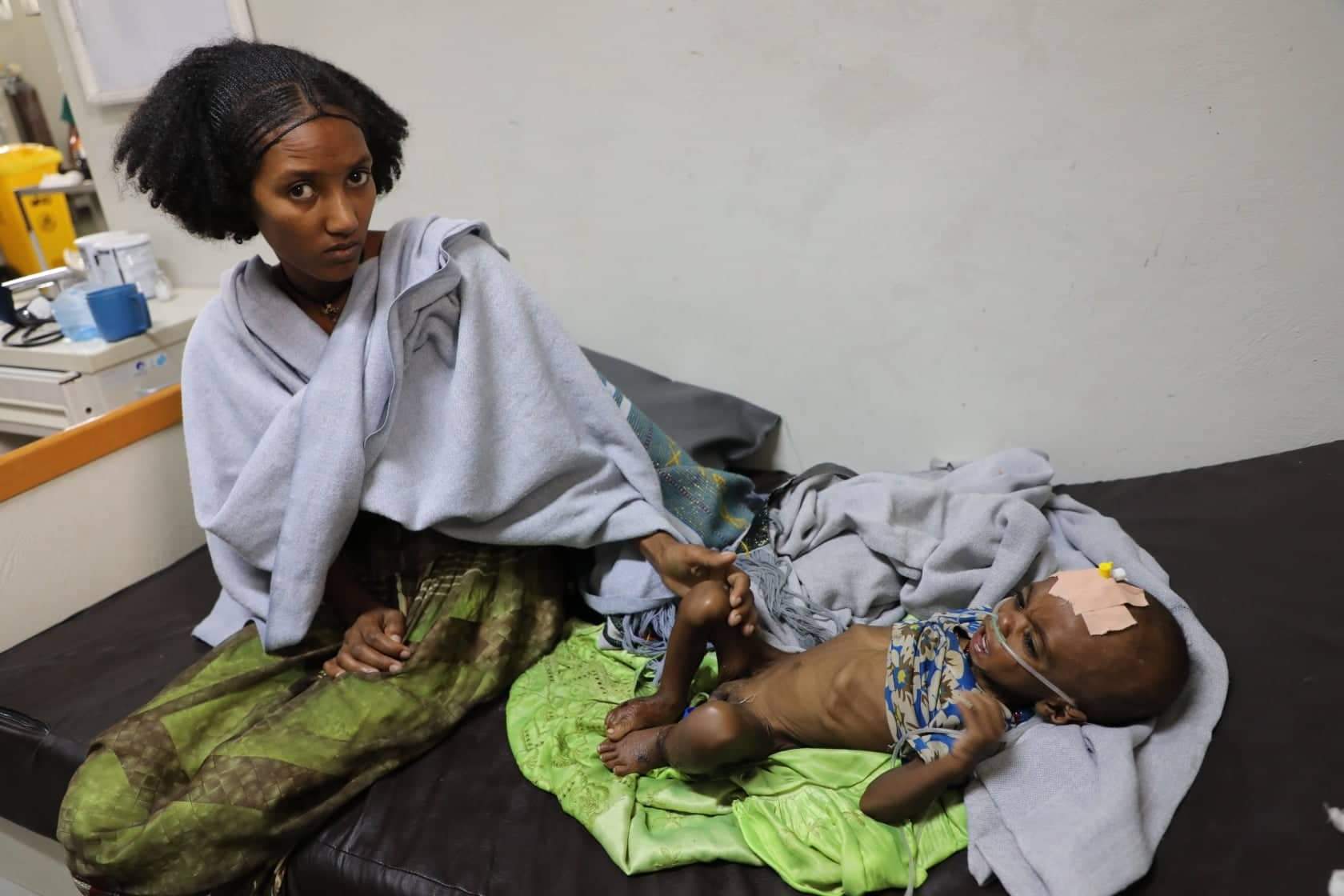 The central government’s use of starvation as a weapon of war is grinding Tigrayans down.

In his book Homo Deus, popular scholar Yuval Noah Harari said that in the 21st Century suicide would be a more common cause of death than conflict, and obesity would be deadlier than famine. But the war in Tigray and the starvation that has already probably killed hundreds of thousands in the region runs contrary to this forecast.

Life in urban areas of Tigray is unbearable. I recently fled from Mekelle to Amhara region in search of a better existence. For some, their fate has been far worse.

Gebre Maryam (not his real name) was a married professional with three children who lived in Mekelle. Before the crisis, the main source of income for his family was his civil servant salary. He fed his family three times a day and his children were attending private school.

Since the onset of the war in November 2020, especially under this horrific siege, he and his wife were unable to provide food for their kids. To fill the gap, he started working as a daily laborer, but it was only occasional employment. His family had no substantial assets to sell.

The limited support from the community and relatives sustained them for a while, but soon there was no food in the house—the children became malnourished.

Amid this crisis, Gebre Maryam saw his wife begging in Mekelle’s streets. When she got home that afternoon, her husband had hanged himself. Gebre Maryam committed suicide because of the soul-destroying misery and ignominy.

Such stories are not uncommon in Tigray these days, as Ethiopia enters yet another cycle of extreme violence.

The published photos of malnourished children are only a fraction of the horrific reality on the ground. Anyone who is closely following the situation in the besieged region understands that a ‘biblical famine’ is likely on its way.

As the siege continues, the severity of malnutrition is increasing and most children are past the critical level.

A UN report in January revealed that among those children surveyed, only 45 percent were reported to have consumed nutritional supplements in the 30 days before data collection from September to November.

The Tigray government’s health office released a study corroborating the UN report. It showed that from July to October, deaths from infectious diseases, non-communicable diseases, and malnutrition had increased markedly. In four months, 1,479 people died because of malnutrition, which was the leading cause of mortality in children under-five. The battle of Adwa that safeguarded the country’s independence was fought on Tigray’s soil and had a devastating, long-lasting effect on the Tigrayan population there.

Over the last 50 years, Tigray has been the epicenter of three major wars: the TPLF’s 17-year armed struggle against the Derg, the 1998-2000 Ethio-Eritrea conflict, and the current civil war.

These conflicts have at times been accompanied by famine.

Claire Bertschinger worked as a nurse for the International Committee of the Red Cross in a town near Mekelle during the 1984-85 famine. She documented her horror and guilt as she was forced to choose which babies to save from the lines of starving people.

“I felt like a Nazi condemning innocent people to the death camps. I have lived with that ever since,” she wrote.

Reap what you sow

Ethiopian agriculture in general, and particularly in Tigray, is characterized by erratic rains, low soil fertility, insufficient inputs, and lack of basic tools. Even in a good year, when rains are on time, evenly distributed, and sufficient, yields remain low and are not enough to sustain all households throughout the year.

According to Ethiopia’s Central Statistical Agency, crop production in Tigray was over 19 million quintals in the 2019 cropping season, but that was still insufficient.

Imagine the dire situation for residents without a normal harvest or aid.

For the 2020 season, Tigray’s Agriculture and Rural Development Office planned to harvest more than 25 million quintals. Unlike 1984-85, nature was on Tigray’s side, except for the locust infestation in some districts.

However, the other factors that endangered the lives of Tigrayans back in the 1980s returned: conflict and a central government using starvation as a weapon of war, which also occurred under the Derg.

The documentary titled “Unknown Famine” by Jonathan Dimbleby helped in bringing about the revolution that toppled Haile Selassie in 1974 and brought about the Derg.

The film’s depiction of the Wollo famine of 1973 caused outrage when juxtaposed by members of the Marxist student movement with scenes of the emperor’s opulent 80th birthday party.

Ten years later, however, in September 1984, the Derg devoted much of its energies to planning the tenth anniversary of the revolution while tens of thousands of people in Tigray were dying of hunger.

As Gebru Tareke said in his book The Ethiopian Revolution: War in the Horn of Africa, “Tigray had not seen famine on such scale and with devastation in five generations.” Of its three million people, 360, 000 died of starvation and 890,000 were resettled in southwestern Ethiopia.

Tigray’s response then was emphatic. Tigrayans mobilized tens of thousands of peasants to construct an alternative road to Gedarif in Sudan using little more than axes, hoes, and their bare hands. Within a week, trucks were bringing in tons of food to starving Tigrayans, winning thousands of hearts and minds.

Amid the ongoing war since November 2020, farmers in Tigray have in many ways been prevented from cultivating. Millions were displaced from their homes, while crops were looted and burned. Farmers in most parts of Tigray lost much of their livestock due to slaughtering, pillaging, and looting by Eritrean, Ethiopian, and Amhara forces.

The main cropping season had already begun when the Tigray army regained Mekelle in June 2021. However, even in liberated areas, many farmers were operating without sufficient fertilizer, seed, and oxen. As a result, yields were possibly the lowest in two decades.

According to a Tigray government food security and agriculture sector report in January, only 55 percent of the total land area intended to be planted for the year 2021 had been seeded.

The total crop production from the liberated part of the region is estimated to be nine million quintals—only a third of the plan.

This minimal harvest was achieved with the help of limited agricultural inputs. The upcoming 2022 cropping season will be even worse. Vital inputs—seeds, fertilizer, and livestock—have not yet reached Tigray. Fertilizer is particularly needed before the main rainy season; otherwise, production will be deficient again and the famine will persist.

People in rural areas have survived by relying on different strategies like selling livestock, eating wild fruits whose consumption is normally frowned upon, migrating to towns, and begging. Yet these coping mechanisms are insufficient given the depth of the crisis and huge numbers of people in dire need.

Currently, it is hard to find work in Tigray’s urban areas. The World Food Programme (WFP) found in January that more urban households were severely food insecure compared with their rural counterparts, and thus people were highly reliant on community support.

WFP said that 83 percent of Tigray’s population—amounting to about 4.6 million people—are food insecure, of which 37 percent are severely food insecure.

In Mekelle, everyone is vulnerable and affected by the siege regardless of socioeconomic status.

There is no telecom service in the city, and rarely is there water and electricity. Banks are largely closed, making it difficult to access funds, and sending money at this time usually requires a 50 percent transport fee. All of the city’s residents go everywhere on foot as there is no fuel for public transport. Occasionally, we would see military patrols on the road.

Food is scarce in the city. The new normal is having a meal once a day or, on some days, not eating at all. Vegetables like onions, cabbage, and lettuce are among the few things that can usually be found in the market, as they come from large farms in southern Tigray. Using basic commodities like edible oil is now unthinkable.

Many shops and pharmacies are closed, as are hotels, bars, and restaurants. It is common to see “for rent” signs everywhere.

To put it bluntly, Mekelle looks like a ghost city. Given that it is the region’s capital and is generally one of its most bustling cities, this may well be true of all urban areas in Tigray.

Discontent is also growing in the region.

I left Mekelle recently via Alamata to Kobo in Amhara, mainly due to the many hardships but also to avoid the fighting. Every week, up to 100 men, women, and youth are doing the same. Most of my relatives remain, although my sister fled to Amhara before me due to privation.

A big concern of the people is lack of resources and maladministration, with many not happy with the way Tigray’s government handled the merchants and other wealthy individuals amid the federal government’s inhumane disconnection of the region’s banking system.

Residents want Tigray authorities to force the rich who withdrew their cash and stored it in their homes to re-deposit it into the local banking system for the people to access. A proclamation was released in March to this effect, but it has not been enforced.

To achieve sustainable peace in Ethiopia, ethnic federalism must be replaced
by Kassahun Melesse

Many residents also remain disappointed at the Tigray Defence Forces’ (TDF) dramatic December withdrawal from positions close to Addis Abeba. There is hesitation about contributing more of their children to the TDF—no matter how just they perceive the cause to be.

They want peace rather than war, of course, but are not willing to submit to federal diktat, let alone hand Western Tigray to Amhara irredentists. Instead of the current dismal, grinding status quo, they want the conflict to be over with quickly.

In truth, unless the world finally acts to prevent mass starvation under this brutal siege, then it is only a matter of time before Tigray’s army does—and Tigrayans try by themselves to launch another emergency operation to save millions of lives, as they did the last time ‘their’ government tried to starve them into submission.

Editor’s note: On May 24, we have deleted a phrase, under the sub head “History repeats,” that claimed Emperor Haile Selassie’s birthday costed $35 million. Although a source was provided, the number appeared highly exaggerated.

Markos, a pseudonym, is a researcher with an interest in human rights, history, and public administration. The author requested anonymity due to fear of retribution. You can contact them at marksis2013@gmail.com