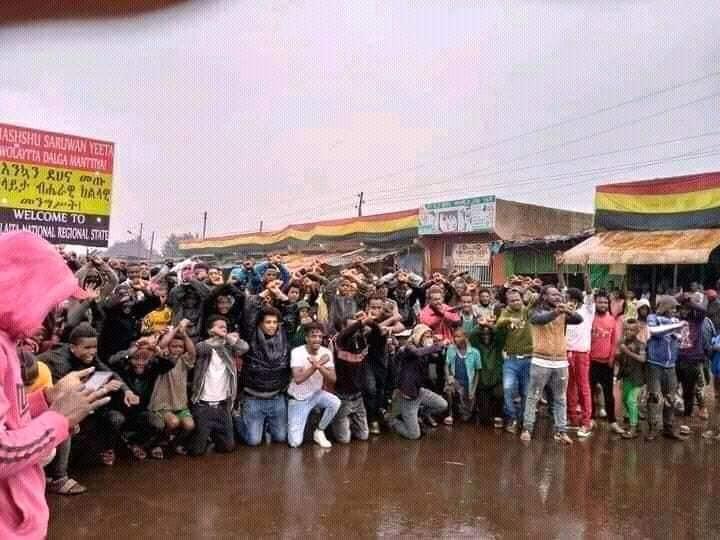 On 10 August, after a standoff between Wolayta Zone council members and the Southern Nations administration, tensions escalated when federal and regional security forces arrested zonal leaders, including Dagato Kumbe, the chief administrator.

At the core of the dispute is a belief from Wolayta politicians and activists that the regional administration has lost its legal authority due to Sidama Zone splitting from the south and becoming  the tenth member of the federation. Their view is that the legally recognized regional council contained Sidama Zone but now that the administrative area of the largest community has seceded, it does not have constitutional legitimacy.

The secession of Sidama Zone, coupled with the resignation of the Wolayta Zone council members from Southern Nations Nationalities and Peoples’ Regional State Council, effectively means the dissolution of the region, Wolayta activists claim. Therefore, the administrative structure with constitutional authority after the federal government is Wolayta Zone and the other remaining zones in SNNP.

And, like the Sidama, the Wolayta, the second-most populous southern group, are pushing for their own region, as are 11 other ethnic-based zones.

The impasse has occurred because of the Southern Nations government’s unwillingness to hold a referendum prior to 17 December 2019, a year after Wolayta Zone council requested on 17 December 2018, in line with constitutional procedures, a vote on whether to form Wolayta Regional State. Article 47 of the federal constitution says regional governments have one year to comply with such requests.

On 22 June, SNNP State Council members from Wolayta announced after an emergency meeting at Sodo, the zonal capital, that they are resigning from the regional council and declaring the establishment of Wolayta Regional State. They said constitution-drafting for the under-formation region would begin and demanded Southern Nations security forces to leave Wolayta the same day.

This was the political background to the arrests that triggered public protests that led to the death of civilians at the hands of security forces.

At the 9 August meeting where the detentions occurred, the agenda was to discuss the progress of preparatory work for the new region and the constitution drafted by lawyers. The participants were zonal administrators and council members, opposition party officials, community elders, chamber of commerce representatives, right activists, and scholars.

The Wolayta masses hit the streets the same day as the arrests, demanding the release of the administrators and others. The government responded with excessive force. The death toll was reported to be at least 10 on the first day of the unrest.

The age-old background to this new bloodshed is that Ethiopia’s nations and nationalities have long been deprived of their democratic rights and autonomy. National political changes in 2018 opened a new chapter for them to challenge an unfair status quo and secure equitable socio-economic treatment and, as they see it, a fair share of political power.

In the diverse Southern Nations region that largely has meant demands to be recognized as regional states—including by Wolayta Zone, whose population comprises more than 95 percent Wolayta people, who may number around six million in total.

The demands presented a major challenge for Prime Minister Abiy Ahmed’s government. So far, it has fallen well short.

Because the regional council failed to proceed with the referendum within a year, the Wolayta people, spearheaded by opposition political parties, YELAGA, community elders, and women association known as “AYDAAMIYAA staged a large demonstration on 17 December 2019.

YELAGA (meaning, peaceful youth movement for justice and equality in the Wolayta language) were organized and given legal status from Wolayta Zone administration to peacefully advance the formation of Wolayta Regional State. However, security forces broke up the demonstration and arrested the leaders of the rally.

On 17 May 2019, according to the Wolayta National Movement, which organized the rally, an estimated one million Wolyata, the second largest ethnic group in Southern Nations, peacefully demonstrated to be allowed to exercise their constitutional rights. Many of these people believe that their own regional state would allow them to genuinely enjoy their economic and political rights. The Wolayta have long been economically deprived and oppressed, marring the public in deep socio-economic and political crisis.

The underlying problem is the last 27 years Wolayta Zone has not enjoyed equitable development and fair participation in national politics. The policies and programs developed by SNNP governments have not been compatible with the zone’s situation. As zonal structures are primarily implementers of regional government policy, they are not entitled to develop own targeted policies and development programs. Consequently, Wolayta Zone has been implementing agricultural, industrial, and social policies that failed to change lives.

Structurally-induced deprivation and outward migration have thus remained to be the predominant fate of the people. By establishing its regional state, the Wolayta people can deepen the autonomy of policy making, and increase the power to bargain with the federal government for budgetary and other national resources that the Wolayta people generate.

Abiy has chaired multiple rounds of discussions over the past two years with opposition political party leaders, community elders, influential people, rights activists, and regular people. The Wolayta Zone Prosperity Party (PP) leader at the end of one of the meetings reported on Twitter that discussions were fruitful.

However, the continued reluctance to move on the referendum, coupled with Abiy’s dismissive rhetoric, fueled public anger towards the premier, especially his suggestion that the autonomy demand stemmed only from power-hungry politicians.

In actuality, the Wolayta quest for regional statehood is a deep-rooted in the minds and hearts of many Wolayta—as shown by the huge displays of public support. This popular passion was again shown by the sacrifices made during the demonstrations that broke out earlier this month.

The arrest of zonal leaders led YELAGA to call for peaceful demonstration which the federal and regional security responded to with live fire, even though protesters were unarmed and could easily have been dispersed by tear gas. This act of state terror resulted in the death of 34 civilians: 8 from Sodo, 13 from Boditi, seven from Duguna Fango, two from Bedessa and two from Hotola Dimtu weredas.

Many angry Wolayta took this as an attack on their sovereignty.

YELAGA had been praised by Ethiopians for complying with the core values of their peaceful struggle as they protected the lives and properties of other ethnic groups living in the zone. YELAGA is still asking the government to facilitate the referendum.

During Ethiopia’s last transition, Wolayta had its own region, but it was marged into SNNP when the federation was constituted in 1995. Since, there has been public discontent and opposition members requesting autonomy were beaten, tortured, and a significant number of youths exiled.

The recent state aggression may be partly due to the regional security force’s seeking revenge for the resignation of all the Wolayta representatives from the regional council and partly due to the rift between the members and old guards of the dissolved ruling party, the Southern Ethiopia Democratic Movement (SEPDM) from Wolayta, who are vying to reassert their hegemony by installing their favored officials.

As context to the recent violence, Andualem Tadesse, the public relations head of Wolayta National Movement (WNM), a legally registered political party, was stabbed on 12 January 2020, while members of WNM and Wolayta People Democratic Front were arbitrarily arrested on 19 December 2019.

That type of repression has a precedence.

Back in 1997, SEPDM tried to create “WOGA GODA”, merging the neighboring ethnicities with Wolayta, which ultimately would have diluted the century-old culture and emblem of the Wolayta people. That attempt saw a fierce struggle from the people and the government’s homogenizing move was finally abandoned.

However, thousands were detained and hundreds were killed, and hundreds of thousands of ethnic Wolayta were forcefully displaced from Arba Minch, the then capital of North Omo Zone, which dissolved after Wolaita, Gamo Goffa split and formed their own zonal administration between 1998 and 2000.

In 1998-2000, security forces killed at least five when the Wolayta successfully campaigned for their own zone and rejected the attempted imposition of the new composite language and identity.

The way out of this worrying situation is answering the constitutional demand of the Wolayta by organizing a referendum. To that end, the Wolayta have been waiting for the House of Federation (HoF) to proceed and for the National Electoral Board of Ethiopia to set the date for the plebiscite.

Delaying this any more could trigger another round of unrest, further tarnishing the reputation of Abiy and his government.

Minyahil is a public health researcher and a founding member of the Wolayta National Movement. He can be reached at minyahil.t@gmail.com