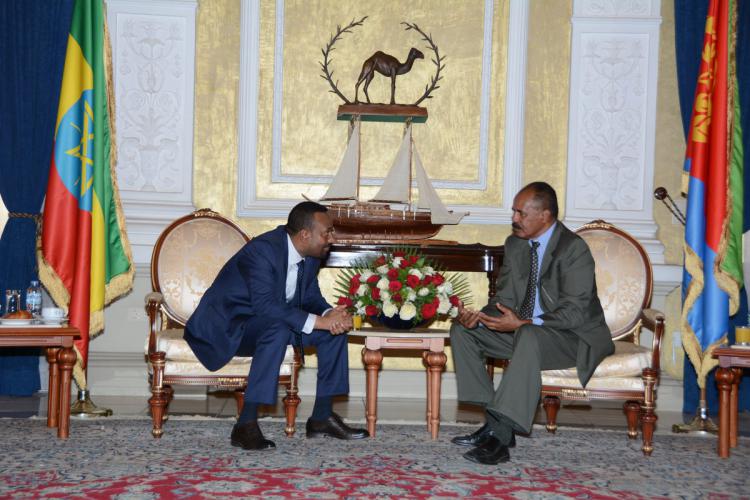 I prefaced my previous piece with quotations from Hegel, Nietzsche, and Dewey with an eye on the need to build a freer society as the guiding principle of one’s democratic aspirations, as the means and end.  I pray they have fallen on the right ears. In this piece, it seems to me appropriate to open my rejoinder with yet another quotation, this time from a letter Marx wrote to Engels in 1857:

“It’s possible that I shall make an ass of myself. But in that case one can always get out of it with a little dialectic. I have, of course, so worded my proposition as to be right either way.”

My article was received warmly by relatively detached observers of Ethiopian politics. But it provoked vehement responses by more partisan readers, those who seem somewhat carried away by the news coming out of Addis Ababa, or by the trolls who work for hostile parties with vested interests in the changes that are taking place.

But in this piece, I have decided to single out a curious reader I found in the name of Koki Abesolome, whose identity I have found it difficult to verify. She is curious because she does not appear to always try and maintain principled or reasoned positions. And worse, her positions have at times been inconsistent and contradictory, which are mortal intellectual sins.

For example, while the war between Ethiopia and Eritrea was raging, she called on Ethiopians to side with Eritrea and fight against Ethiopia. How one fights against their government in an international war is mind-boggling. She does not care to hide her affection for the EPLF. In one of her posts, she wrote that had it not been for the support of the EPLF, EPRDF would not have taken Addis Ababa—as if the support was not mutual.

Now, Koki’s love for the new prime minister seems to match her previous passion for the EPLF, and her ongoing commitment to American conservatism. In a lengthy Facebook post Koki went as far as proposing herself to help set up a public relations team for Abiy.

She accuses me of writing the piece rather craftily. Of course, so much craftiness and craftsmanship had gone into the composition in the interests of balance and objectivity. Now what’s the problem with that? She thinks that gives my piece the appearance of balance while it remains in substance biased. I do not agree. I gave her Ceasar, “the seventh king of Ethiopia,” his due. I didn’t stoop low enough to mention his showy behavior as displayed by the comically scripted interview, personally driving the UAE crown prince around Addis, the training he gave Addis’ artists, the lesson on “military doctrine” he gave to his commanding officers, which showed he had nothing doctrinal to offer, the emptiness of his romantic rhetoric of unity, etc. I wanted to tell my story with a judicious tone that allows us to appreciate the delicate balance of the political scorecard of the first 100 days of Abiy’s premiership.

She thinks I deployed scare tactics by mentioning a Rwanda-like genocide and Soviet-style disintegration. However, the allusion was made with a more limited scope and purpose than she insinuates. I didn’t use the Rwanda analogy to instill fear in the people of Tigray and get them to rally around the TPLF, as she claims.

The problem is that, here as elsewhere, she engages in pseudo-psychology in an attempt to unmask my motives, rather than refute my arguments or falsify my facts. Rwanda was mentioned only in reference to the probable result had the grenade attack tragically taken the life of the prime minister. The immediate, triggering cause of the Rwanda genocide was the assassination of Rwandan President Juvénal Habyarimana. The situations were similar and I consider it necessary to sound the alarm. The message is loud and clear: keep the man alive. There’s nothing in this that should be alarming to Koki’s sensibilities.

Following the incident, malicious denunciation of and sporadic violence against ordinary Tigrayans spread in parts of the country as well as on social media. This took the form of rumors portraying Tigrayans as TPLF spies and covert terrorist operatives. This was not helped by the PM’s call on the people to be vigilant about strangers in their neighborhoods—language familiar not only to the EPRDF, but also reminiscent of the Derg era. Unsurprisingly, vigilante justice is replacing law enforcement in parts of the country.

The allusion to the disintegration of the Soviet Union was made in reference to another analyst’s fear that the changes might pave the way for the rise of a Putin-like dictator that I found far from the more proximate danger of disintegration. So it was not my purpose to make a fully-fledged comparative study of USSR and FDRE. I understand any unfavorable reference of Gorbachev causes so much anger among conservatives. Rarely Gorbachev is mentioned in relation to his success in reforming domestic politics, for his success belongs to a different realm, that of international politics. He is credited for single-handedly ending the Cold War, ushering in a new wave of democratization in Eastern Europe, at the cost of Soviet Union. He is not the hero at home that he is abroad.

In making these allusions and emphasizing the looming dangers, I didn’t claim to have made a definitive statement. I rather said I chose to err on the side of caution. I knew full well that no argument, but only history, can refute me on this. I enlisted the dialectic to get me out of it.

Koki makes unsubstantiated claims like “Demeke and his party knew that the only chance for a national movement towards democracy at this juncture was with OPDO at the helm. They also knew that with Abiy in the driver’s seat the reform will be in good hands.”  She is right about the collusion between ANDM and OPDO to outmaneuver TPLF in the party elections. But, as it transpired, this came only after Demeke withdrew when he was told he was not assured of keeping his deputy PM position.

SEPDM’s position is not clear yet, apart from proposing Shiferaw Shigute for the premiership. Her claim that “Since then, SEPDM’s concern about OPDM has dissipated, allowing it to embrace PM Abiy’s leadership with euphoric enthusiasm” remains unsubstantiated. I find it hard to imagine the “euphoric enthusiasm” of a party that lost to its rival. The change in the leadership of SEPDM came only after the Sidama-Wolayita conflicts and we have not seen anything to warrant any judgement about how enthusiastic the new leadership is.

Abiy has quickly established himself as a political superstar. He has ended the Cold War of the Horn of Africa. But it takes time to see at whose expense our version of the Cold War has come to an end or whether it will last. With his diplomatic trips to Djibouti, Asmara, and Mogadishu, he seems to have reset the regional order. The jury is still out on whether Abiy has taken the swords-into-plowshares scheme seriously. We need to see fundamental changes in Ethiopian-Eritrea relations, Ethiopia’s role in the so-called war on terror in Somalia, and other related issues raised by the Horn’s regional security complex.

Both fans and foes of Meles Zenawi, whose ranks rival each other in fervor, have long agreed on one thing: he excelled at analyzing the domestic and international political economy, the national interest, and foreign policy priorities. Unlike Meles, Abiy’s emphasis on moral sentiments rather than national interests fails to offer a compass or define a framework for dealing with neighboring countries. Of course, while emphasizing the need to include the Tigray Regional State government or TPLF in dialogue with Eritrea in my piece, I have stopped short of accusing Abiy of colluding with Isaias Afewerki, under the guise of a peace deal, to wage his war against TPLF; a matter that received treatment in a Foreign Policy piece by Bronwyn Bruton of the Atlantic Council. Dialogue was at the centerpiece of Meles Zenawi’s five-points peace proposal.

The question now is: Did I leave Koki with a dialectic that will get her out of this?

Published under a Creative Commons Attribution-NonCommercial 4.0 International licence. Cite Ethiopia Insight and link clearly to this article if you republish.

Alemayehu has taught constitutional law and political theory at U.S. and Ethiopian universities. He served as a National Peace Advisor to the Ministry of Federal Affairs from 2010-11 and currently holds a lectureship at Mekele University School of Law.