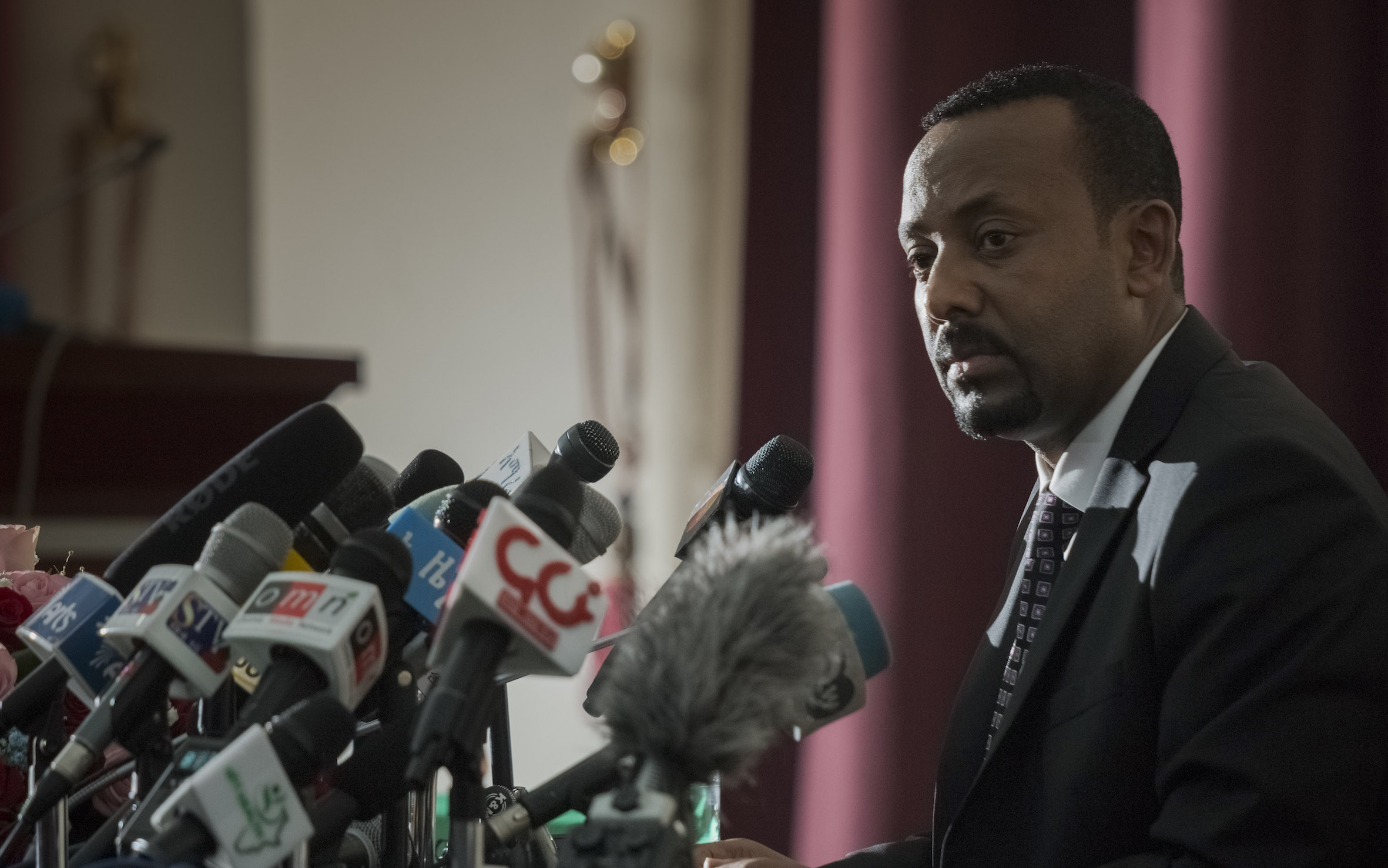 Partisans will consider Prime Minister Abiy Ahmed’s first conference as either a glass half full or half empty. Others will be simply underwhelmed by his performance.

Given the potential importance of the event, the media coverage was scanty, as if the press did not have much to get their teeth into during the two and a half hour session.

Many of them headlined the $1 billion that will apparently be provided by the World Bank in direct budget support. But this cannot be considered as major news given the incredible political, security, and economic challenges Ethiopia is facing. Others led on his pledge that the 2020 elections will be held to schedule and competitive, or that reforms will continue “at any cost”. But both announcements are mundane from a leader who claims his raison d’être is democratization.

Regarding the vital issue of the bulging ethnic unrest, Abiy first simply repeated his previous statements: “There are organized groups who are conflict entrepreneurs…these forces incite conflict everywhere by triggering people’s emotion”. But, in his opinion, “there is big improvement” in this regard. He also condemned once more the “economic sabotage” that is allegedly occurring.

Briefly, he addressed a wide range of other issues, from privatization to the black market, from the situation in Jijiga to the defects of the Renaissance dam, to an education roadmap. He clarified “exaggerations”, or “wrong perceptions”, and dealt at length with erroneous “attitudes” very common among Ethiopians, which “will take a long time to change”.

But the press conference did not reach the heights needed to address the vital issues Ethiopia is facing.

For the short-term, Abiy still has not presented concrete measures to urgently and energetically tackle the instability. And all the while the public worries about a flare-up that could lead to deadly danger.

Over the mid-term, it is now clear that he has a course and a timetable: free and fair elections in 2020. But he has not been explicit about the political procedures that will put in place the new mechanisms to guarantee this.

On the economic front, we still don’t know how Abiy aims to rapidly respond— for example, through an emergency plan focused on a few practical measures—to the craving for jobs from the youth. Their demonstrations significantly aided his rise to power, but they will become more and more angry without fulfillment of their basic aspirations.

Abiy’s long-term vision remains a mystery. Regarding the federal question, he stated that “the power of the federal government is to protect federal institutions found in every regional state, it is to maintain the safety of his people”. But how does he envisage reconciling the centralist ‘Ethiopianism’ he seems to cherish with the deep aspiration for truly decentralized self-government, which was one of the strongest requests of the protesters?

And what kind of economic liberalization does he have in mind? What should be the role of the state? For example, is Ethiopia now on the path to a social-market model, as in Germany or in the Nordic countries, or the full-fledged liberalism of the U.K. or the U.S.? Will there be privatization of land, or not?

Of course, the honeymoon had to end sooner or later. This was inevitable given the unrealistic expectations that regime change aroused among the population. But it appears that Abiy is not making any meaningful headway during recent weeks. His momentum wanes. More importantly, it seems he is condemned to lose the mastery of time and agenda, one of his trump cards. One-man rule, with a vacuum between Abiy and his popular base, has its limits.

Given the dramatic divisions within the coalition, can the EPRDF rise from the ashes?

It is now clear that Abiy has decided—or had no choice—to rely on a renovated EPRDF to assert his position, to reestablish a network of mid-ranking administrators able to impose law and order, and to build a democratic political system and liberal economic structure. Thus, assuming he has a clear agenda in mind, he will be obliged to at least adjust it to the point the Front could approve it. In addition, he will be dependent on the EPRDF’s schedule.

This raises essential questions. Given the dramatic divisions within the coalition, stemming from power struggles and, above all, on opposing views on the way forward, can the EPRDF rise from the ashes? This would mean reviving as an organization united around a solid reformist program and a broadly backed leadership. If so, can this rehabilitation reverse EPRDF’s sinking reputation and make it attractive enough to become the major player in the upcoming election?

Last, but not least, how long would this renewal take? At best, it could take shape during the preparation of the next EPRDF Congress and then be endorsed by members. The Congress was scheduled for the end of September, but that seems unrealistic.

All the while, the above-mentioned power vacuum will continue, and the centrifugal forces strengthen. Abiy’s initial momentum will dwindle, while the eagerness to see tangible dividends from the regime change will intensify.

The opinions expressed are the author’s, although Ethiopia Insight is responsible for factual errors.