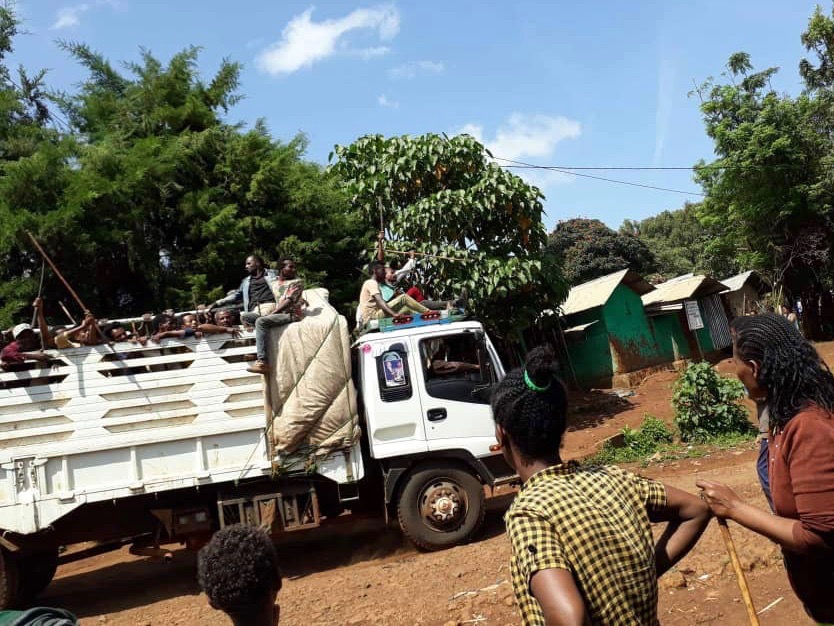 Tens of thousands of people have fled Kamashi Zone in Benishangul-Gumuz state after deadly instability following the killing of four zonal officials in Oromia last week. The unrest is another example of renewed instability around disputed inter-regional border areas that has plagued Ethiopia this year.

Mainly Oromo and Amhara people sought refuge after retaliatory attacks by members of the Gumuz community, according to Matiyos Geleti, a Kamashi resident. “A few emotional Gumuz youths began to attack residents in Kamashi as a revenge for the killing of the officials,” he said.

Many people were notified that their close relatives were killed

Oromia officials have said as many as 75,000 people are displaced, while Benishangul-Gumuz spokesman Zelalem Jaleta told Ethiopia Insight on Oct. 2 the figure was 20,000. The situation follows deaths and riots in state capital Asosa and elsewhere in the relatively underdeveloped northwestern region in June and September.

Serious violence in Ethiopia this year, primarily near the Oromia-Somali border, and between the Guji Oromo and Gedeo communities, has led to more than one million internally displaced people, according to the United Nations. The Kamashi Zone Administrator and three zonal police officers died, while two others escaped, according to residents. The officials were returning from a meeting in Bambasi town in Benishangul to discuss the relocation of 13,000 people displaced by earlier violence.

Baca Ayele, a Biilaa resident, said on Oct. 2 that since the attack people have been killed and displaced, with perhaps 2,000 sheltering at Biilaa high school. “Even today one police officer was shot around the border on Oromia’s side. Many people were notified that their close relatives were killed.”

The territory that is now part of Kamashi Zone was part of Wellega province before Ethiopia was reorganized in 1991, according to a research paper, and is home to Gumuz who used to live in the Didessa area of Oromia.

Benishangul’s border with Oromia and Amhara is ill-defined and has been “fraught with friction and tension” since the creation of the region, according to Asnake Kefale’s Federalism and Ethnic Conflict in Ethiopia. Since 2007, there has been sporadic conflict between Oromo and Gumuz in the border area of Kamashi Zone and Oromia, which is partly over the right to extract sand, Asnake wrote in the 2013 study.

Abdi Wakwoya, a driver for an NGO working on establishing the border, said the violence may be related to that process. “Two weeks ago there were rumors that Gumuz people will attack people if this boundary is demarcated,” he said. His organization is working on the border in Sasiga Woreda in East Wellega Zone.

On Sep. 29, Gumuz crossed into Oromia and killed three Oromo, dumping one body in a river, Abdi said. They raided properties in six kebeles and burned at least 20 houses. “Youths who went to Sasiga from Nekemte to defend those around the border are not allowed and are being threatened by military,” he said.  Omer Ahmed, who lives in Assosa, said many Gumuz had been killed in border areas, especially in West Wollega, since 2014.

Yesterday police clashed in Biilaa with local youths who wanted to go towards the border, according to an official, who requested anonymity. “Many people were killed, many are missing, properties damaged,” he said about the situation in Kamashi. A Gumuz police officer was beaten to death on Oct. 2 in Najo town in Oromia, said Khalid Nasser, an Australia-based activist, who said Gumuz had primarily been victims of Oromo aggression.

Tafarii Dhidhita is one of those sheltering at Biilaa school. He says Oromo were forced to flee after attacks by Gumuz youth in Mirmita Kebele, Kamashi Woreda, Kamashi Zone.  “I have witnessed eight people killed starting from Sep. 24 up to the day I left on the 26th. They were burning every Oromo house they came across.” Local administrators refused to act when Gumuz started gathering and chanting that Oromo must go home, he said. (Read full testimony below)

On Sep. 19, Gumuz in Kamashi reacted to the announcement about the teaching of Afaan Oromo in the region and disrupted the market, said Miratu Olana, another displaced person in Biilaa. Ten days later, the killing and raiding started, said the resident of Daguba Kebele in Kamashi Woreda, who had lived there for 26 years.

The Sep. 26 ambush is being pinned on the Oromo Liberation Front (OLF) by locals who are demanding justice and for the federal government to restore order, according to Matiyos. Negeri said an armed group acting in the name of OLF was responsible, which is what the federal Attorney General’s Office alleges about a grenade attack at a June 23 rally in Addis Ababa attended by Prime Minister Abiy Ahmed.

The OLF was banned as a terrorist organization until June but has now returned to Ethiopia to participate in democratic politics. It was part of allied rebels that overthrew the Derg military regime, but left the Transitional Government formed in 1991 after relations with the TPLF soured. The OLF is now seen to be in competition in Oromia with the ruling Oromo Democratic Party, which is led by the Prime Minister.

OLF is not involved in the conflict and believes it is caused by mercenaries hired by a group trying to weaken the government, according to an Oct. 2 BBC interview with spokesman Tolera Adeba. Tolera was unavailable to speak to Ethiopia Insight as he was traveling.

The Benishangul People’s Liberation Movement alleges that the OLF committed multiple attacks in recent months and says indigenous people in the region are oppressed by Amhara, Oromo and Tigrayans. The Gumuz historically faced oppression and subjugation in Wellega by Oromo and by Amharic-speakers from the east, according to Asnake.

Benishangul-Gumuz is the administrative homeland primarily of the Berta and Gumuz people. In a 2007 census in Kamashi Zone, out of a population of 101,000, Gumuz comprised 61,000, Oromo 25,000 and Amhara 11,000. Amhara were displaced from Kamashi Zone in May, according to the Association for Human Rights in Ethiopia..

Tafarii Dhidhita, his father, his wife, and his four children, were among those who arrived in Biilaa on Sep. 28 from their home in Mirmita Kebele, Kamash Woreda, Kamashi Zone, Benishangul-Gumuz. This is his account provided to Ethiopia Insight:

“Around six months ago, Gumuz people said Oromo people wrote a (derogatory) word ‘Shanqila’ in school. On that day a woman called Nuritu Etana, gender officer, said all Oromo have to leave as soon as possible.

After that one Gumuz man said “to whom are you adding us? Is it Europe or America?” After that Gumuz people started saying “we don’t need this ‘medemer, take it away from us. The one who invented this ‘medemer’ is Abiy Ahmed, who is Oromo. Do you want to make us Oromo’s slave?” and chased him away.

The Kebele Administrator said, “they are right; you can go starting from now. And also tell those who have question like yours to leave and get back to your country.” The police asked what our complaint is about and he said get away from here before your blood is shed in my hands.

After that they started burning houses, killing, slaughtering people, robbing properties. I have witnessed eight people killed starting from Sep. 24 up to the day I left on the 26th. They were burning every Oromo house they came across.

At some places they locked people inside their houses. We talked on the phone to one family who were locked inside their house, but now their phone is not available. We got to the camp on 28th. We are not getting support from the government, but the community is doing its best in supporting us.

Solomon is a freelance journalist and Ethiopia Insight reporter. He used to work for Addis Fortune newspaper.