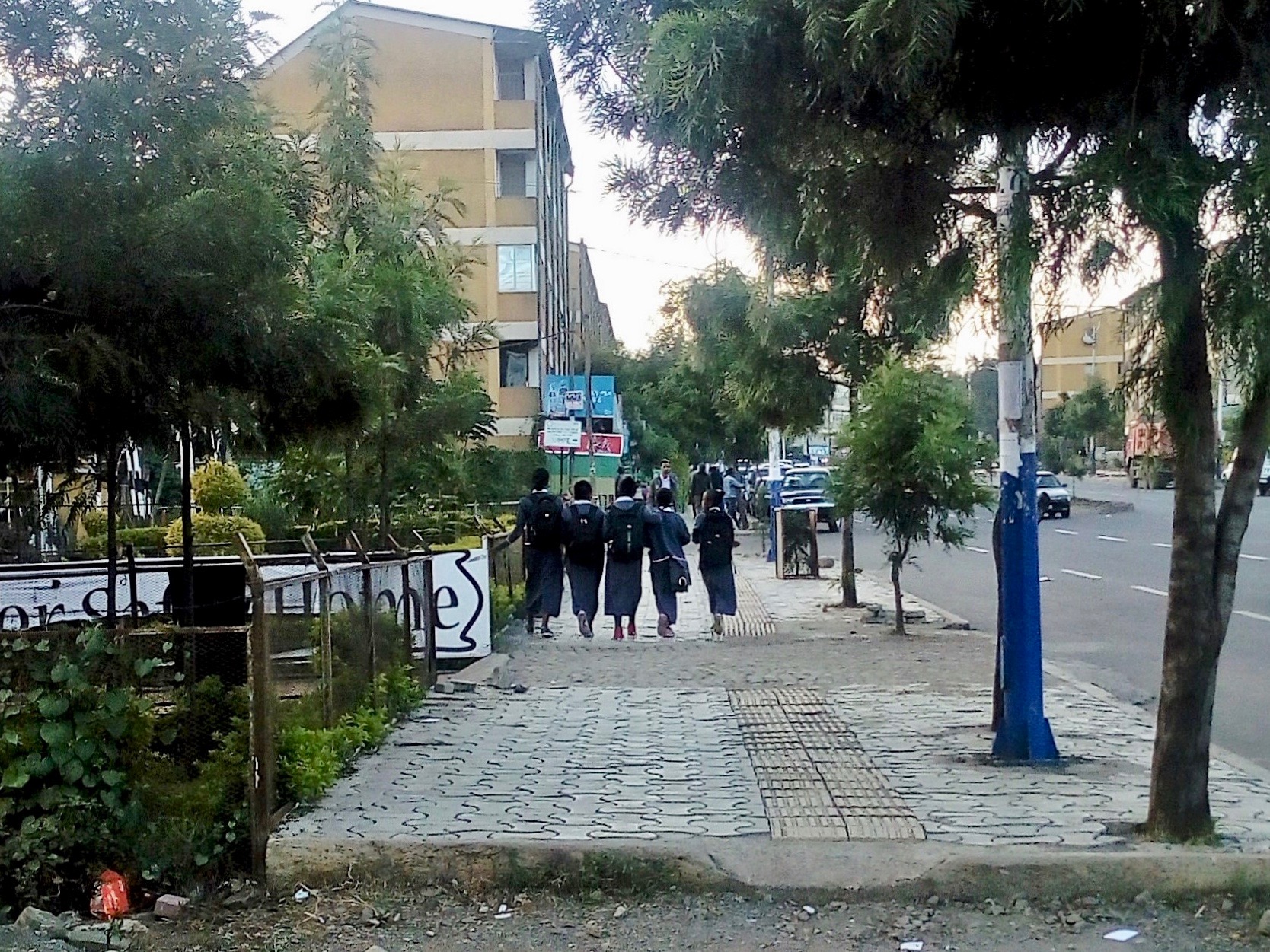 Even with the dedicated support of a youth charity, Hana and Samrawit were unable to find a place in a public school in Addis Ababa. But that all changed when a ferenji got involved.

Dressed in colorful uniforms, each Addis Ababa morning children gather in front of crooked metal fences, where the smallest sit on the pavement to play, waiting for the moment to dash in. Others, looking equally resplendent, stand near shiny gates, which shield well-maintained buildings. Kids are playing in front of them too.

Both government and private schools are spread around the city, each one hosting high numbers of boys and girls. Data shows that during the last ten years, Ethiopia has made progress in improving literacy rate (from 39 percent in 2007 to 49 percent in 2015), increasing the proportion of children attending school, and enhancing the quality of the teaching.

However, the weaknesses of the system are still glaring when you focus on individual experiences—even of those living in the capital city, where education is relatively better provided for.

We have heard a lot about the rule of law from Ethiopia’s new political leaders recently, but this does not seem to have permeated yet to Addis Ababa’s education system.

The privileges extended to me as a foreigner demonstrate that this is not really an education system at all. At least not one that even pretends to treat all of its users equally.

On a fringe of Addis Ababa, two girls grew up in familiar difficult conditions. They were born in single-parent families where their mothers could hardly supply their needs.

Until last year, they attended a private school thanks to a charitable project caring for disadvantaged children. It provided an informal kindergarten and then those who passed an exam could attend the local private school with all fees paid.

Through this system, Hana and Samrawit (not their real names) entered the private school when they were six, but in the following years their education experience has not been so great.

They failed grade nine, so they had to repeat it. Since the new year’s fees for their private school had increased—to meet the new teacher salaries introduced by the government—the charity asked the students to instead register with a cheaper public school.

The girls therefore started to look for a new school to enrol at. They visited their neighbourhood institution, located in one of the 12 woredas of Nifas Silk Lafto Sub-City, but the secretary told them they could not enrol because of the previous failed year.

However, the project sponsoring them decided to check for spaces in other schools in the area, contacting the kebele’s education officer. But when reached by phone, the civil servant declared it was impossible to interfere in specific cases, so he sent the question up to one of Addis Ababa’s 12 kifle ketamas.

The project, continuing to back Hana and Samrawit, then asked me to go with them to the government offices to provide support, as they lacked confidence in their quest. I had no formal authority in the case, but was chosen because I worked for the project in the past, and me and the girls knew each other well.

They seemed happy because they expected more doors to open for a ferenji (literally, ‘foreigner’), as they immediately informed me. And it was immediately obvious their expectations were reasonable.

As we arrived in the corridor of the relevant office, the queue scattered and let us enter the waiting room, where the secretary invited us to have a seat and called a man who could speak English to talk with me.

He introduced himself without mentioning his role and I gave him the charity’s letter regarding the situation. He sympathetically answered that many high schools are refusing requests, so he knew our problem to be quite common. Quite common, but apparently also special enough to allow us to talk directly to him.

Within a few minutes we were in a new office where the manager of the sub-city school sector greeted me and the girls with a large smile, and ushered them into armchairs. The girls’ body language revealed their apprehension and embarrassment at this special treatment.

The education head read the letter and informed us that the situation was so ‘unusual’ that it should be solved personally by him. He promised to call the director of the neighbourhood school to ask her to register the girls.

I was surprised as I couldn’t work out why he was so committed to the problem, nor how he could solve it so easily. I requested a document signed by him which declared their right to be registered, but he said we wouldn’t face any more obstacles after his call. In Amharic, he told the girls to attend in two days’ time where the director would welcome them. We thanked him and left.

As soon as we got in the street, the tension evaporated, and the girls started to laugh and to share how the people have been so kind with them, how easy it was to meet the boss, how fast he found a solution. They again explained they wouldn’t have succeeded without me; not because of what I said or did, but because of what I looked like.

They were surprised at the kindness they had just been treated with. In their opinion, the people we met were far more important than the ones they had spoken with at the high school. And thanks to my presence, everyone in the office smiled, addressing them clearly and kindly. They begged for me, a ferenji, to accompany them to the registration.

That day in front of the school there was a big crowd asking about the possibility of registering. We remained outside the gate with others. Hana commented that we would have already got in if we knew anybody working there.

At some point a man announced that the registration had been postponed to the following day. While the crowd was complaining, Samrawit tried to sneak past. She was stopped by a guard, but as the woman saw I was with her, she allowed us to get inside, without seeking further information.

We talked directly with a manager, who said she hadn’t received any call from the headquarters, but, again, our case was so special that she could write the names of the girls in the list of students who could register the next day.

Outside the school, we met a woman from the neighbourhood who congratulated the girls for having found a way to speak with a decision-maker. She seemed sincerely happy, she clapped her hand on their shoulders, sighing how lucky they were to have a ferenji with them.

I asked the girls if they thought it was right that we were succeeding just because of my skin color, and thus my presumed status. They told me it was not fair, they felt bad for the crowd who couldn’t reach the offices, but in Ethiopia everything works outside the rules, they said—it all depends on personal relations.

The final affirmation of their beliefs arrived the day after, when one of the two girls was not called in the list of students to be enrolled. While I was looking for clarifications about Samrawit’s absence, someone called us from the building, shouting at the guards to let us in.

In his office, the man, also a manager, explained that since he had seen us the day before, he understood how ‘unusual’ our case was, and so he would solve it immediately, as he in fact did. After a long time filling and ferrying forms, we exited the school. Hana and Samrawit were now officially students.

Setting apart the positive outcome of our bureaucratic adventure, the chain of events shines a light on the inequities of the education system.

The first fact to be noticed is the fragmentation of our experience through different times and spaces. Initially, no single institution presented itself as the right place for solving the problem: neither the high school, nor the kebele, nor the kifle ketama. Every institution tries to pass responsibility for making a decision to someone else, creating a sort of maze in which it is necessary to collect clues to try and unlock the puzzle.

Instead of being regulated by a rulebook entrusting specific rights and duties to particular entities and officers, the system seems to be guided by the personal will of people occupying positions, and the power of any given role depends on who is performing it.

The arbitrariness of the application of basic rules was shown by the fact we could enter some places—the education administrator’s office, the high school, the school manager’s offices—even though others could not.

Furthermore, the recurrent reference to our case as ‘unusual’, never explained in any context, seems to give our interlocutors the authorization to behave according to a set of unspoken and unwritten guidelines.

The feedback from Hana and Samrawit, and the comment of the woman outside the school, indicate a widespread awareness of the arbitrariness guiding the decisions, accepted more with resignation than complaint.

Inside this informal system, people have learnt how to improve their chances of success. On a number of occasions, Hana and Samrawit refer to the colour of my skin as a factor influencing positively the interlocutors who solved our problem. The girls realized the injustice for others, but, understandably, they utilised their own asset (me) and reached their goal.

As stated by the government, one of the five priorities of its educational system is to “provide equal opportunities and participation for all, with special attention to disadvantaged groups”.

Instead, our case highlights discretionary decision-making as well as a lack of transparency in administrative offices and schools. Citizens seem to be used to seeking personal connections to gain advantages rather than relying on the rules and their rights.

From their own narrow stand point, for the individuals involved, behaving in this manner is a rational way to achieve their goals. But the long-term downsides of such a non-systemic system are frequently not taken into account.

After all, it is a critical problem if Ethiopian citizens are routinely not treated equally before the law.

Alice is studying for an MA in anthropological and ethnological sciences at the University of Milano-Bicocca. In Addis Ababa she's researching the perception of disability and its impact on parenting in the context of marginality.