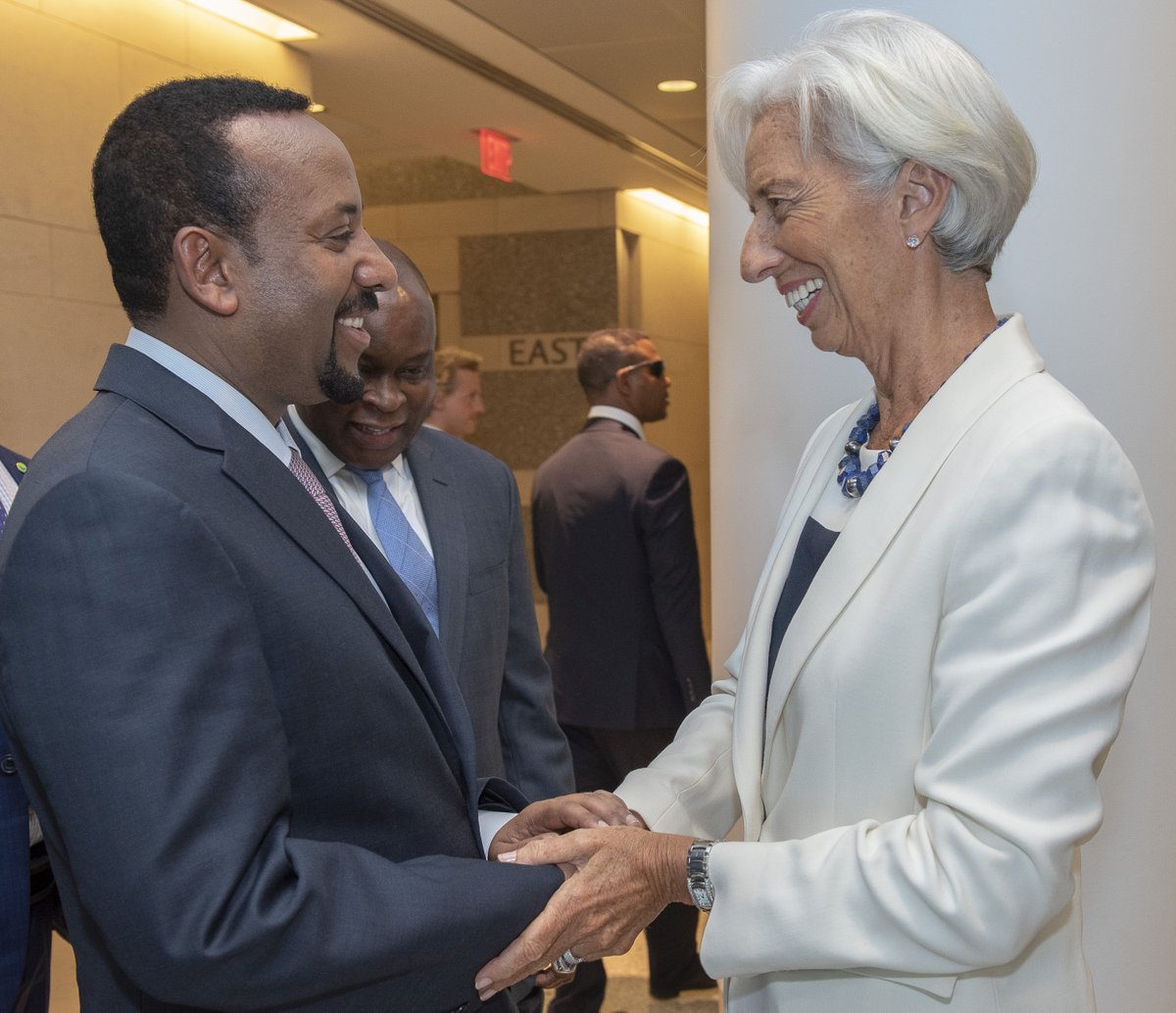 We could all see that the ‘Meles model’ was running out of steam, but the treatment must be strategic, and above all it must be homegrown. Instead, the IMF seems to be exporting a failed prescription from the 1980s.

After a 16-day stint in Ethiopia, meaning fine dining with the political elite and hobnobbing with our executive class, the International Monetary Fund delivered its annual report on the economy.

The document, known in IMFese as the Article IV Consultation Staff Report, flags risks and sets out recommendations. In what seemed to be a sign of support to Prime Minister Abiy Ahmed and his gender-balanced cabinet, the Report was supplemented with a special feature on the role of women in the economy.

The jargon-heavy 83-page report found that the economy grew at 7.7 percent last year, which it attributed to factors including a favorable harvest and expanding air ticket sales and manufacturing output. On the downside, it says growth was constrained by political uncertainty, foreign exchange shortages, and adverse terms-of-trade.

On the fiscal front, the Fund cheers the fact that the government controlled expenditure. Its reasoning is that this will address the problem of insufficient tax and non-tax revenue. The Fund is also happy that the National Bank of Ethiopia reduced the rate of growth of the amount of cash circulating in the economy. The reason for that cheer is that this could help contain inflation, which was over 10 percent.

But the height of happiness comes when it deals with the privatization and liberalization agenda: reforming state-owned enterprises (SOEs), opening up more areas of the economy for private investment, and developing a securities market. The joy was shared by the World Bank’s Ethiopia team in its latest briefing to journalists. Indeed, it was blunt enough to state that “what is coming is not just privatization, but an economy-wide reform”.

But in economic development, it is not just the reform that matters; it is who dictates the terms. In the 1980s and early 1990s, the two Bretton Woods institutions infamously pushed many poorer countries to prioritize fiscal conservatism, privatize, and open-up. We should therefore be suspicious of the role these institutions and their Western backers have in Ethiopia’s economic reform.

The double standard is clear

The signs are not good. The IMF’s Executive Directors baldly stated that “the public sector led development strategy is reaching its limit, exacerbating external imbalances and raising public debt vulnerabilities”. This from an institution that pushed Western governments to bail out failed banks after the global financial crisis. The double standard is clear: when it comes to developing countries, it commonly advises governments to offload state assets, but when it comes to developed nations, it is all about strategic government intervention. The common theme is the protection and promotion of corporate interests.

It looks like the Bretton Woods institutions still proudly carry their disgraced ideological baggage when dealing with developing countries like Ethiopia, although their Structural Adjustment Programs (SAP) proved to be a complete failure. Airbrushing history, the IMF report says: “implementation of structural reform is critical to promote competitive markets and improving the investment climate to catalyze private investment.” This sounds like to get to the future, Ethiopia is heading back to the 1980s. “Gradual opening of the financial sector to foreign investors could improve services and transfer technology and know-how,” the Fund says, offering a fig leaf for the promotion of private interests.

Many Western institutions, including influential media outlets, have criticized Ethiopia’s decision to keep much of banking and transport and all of telecoms and energy under state command. An interventionist approach was often presented pejoratively as the inevitable handmaiden of authoritarian rule. The IMF and World Bank have been the main cheerleaders, attracting plenty of attention, provided that they sell their narrative with “evidence”.

Until now, Ethiopia gave a deaf ear to these voices and grew the economy through public investment in economic and social infrastructure. This has resulted in not only GDP expansion, but improvements in access to education, primary health care, improved sanitation and an enhanced social safety net. But the program had shortcomings in terms of job creation, revenue generation, export growth, the balance of payments, fair distribution of resources, and effective public service delivery.

That long-held resistance to policy dictation by the West seems to have changed under the new administration. Now, economic strategy is facing West. China’s reaction will be therefore interesting to observe, and consequential for Ethiopians, as much-needed roads, dams, railways, factories and electricity and telecoms networks have been built with tens of billions of its loans over the last decade.

To understand what some of those consequences might be, we have to understand where this shift is coming from. One possible scenario is that the government is genuinely convinced that the change of approach is necessary to correct the defects. Another possibility is that it is forced to accept such a shift as it inherited an economy struggling with structural and transitory challenges. A combination of the two could of course also be possible.

History is full of evidence that the IMF and World Bank got it wrong when it came to advising poorer countries to open up. This largely appears to be because they overlook domestic factors and focus instead on the interests of foreign investors. Countries from Argentina to Ghana, from Thailand to South Africa, have suffered under such misguided guidance. Argentina is still paying the cost of the SAP pushed on it by the Bretton Woods pair.

Hence, it would be wrong for Ethiopian policymakers to swallow whole their blueprint. Instead policy must be based on the real needs of the economy, finding lasting solutions to them, and prioritizing the most urgent problems. In other words, if we have to privatize, we have to privatize on our terms and to our timeline. The diktats of the international financial institutions that come tied to technical assistance and loans should be resisted.

The key is creating a critical mass of local investors

It is true that the heavy public sector focus has crowded out private investment, dis-incentivized innovation, distorted the market, and created an inefficient allocation of resources. Changing this will be important if we are to sustain the growth we have enjoyed for the past decade. But the key is creating a critical mass of local investors. No parachute capital, in the form of FDI, will change this in the long-term. After all, international capital flows in the direction of high rates of return. When the return declines, it leaves. But local investments stay around and reinvest, hence providing a further stimulus.

Our country has invested heavily in trying to create capable local investors, but success has been limited because of policy deficiencies. For instance, millions of small and medium enterprises (SMEs) have been created, but there is no clear road map to help them move up the enterprise ladder, let alone linking them with global value chains. Similarly, efforts have been made reorient local investment from services to industry, and particularly manufacturing, but the investment incentive scheme has not been aligned with risks. From land lease laws to duty-free schemes, financial regulations and customs arrangements, the system did not account for the risks that a manufacturing investor faces. This discourages investors, and funnels them towards the service sector.

But this does not mean that nothing has been done. Although not a huge number, there are SMEs that have managed to grow large and traders who invested in the manufacturing sector. We have even witnessed farmer unions moving into flour, plastic, packaging and other processing tasks. The key question now is why did we fail to help more SMEs grow big and have more service sector players invest in manufacturing. It is a pity that we appear to be trying to find the answer to this in FDI.

This is a not a wholesale denunciation of FDI, which plays a role in increasing growth and reducing poverty. But it is not a lasting solution. And if the issue is partly about allowing the people of a country to own their destiny, as I believe is the case with us, FDI goes against this objective. It limits local capital formation, rewards established capital, and constrains labour’s bargaining power. Essentially, it rewards foreigners at the expense of locals.

Another puzzle in our economy is its markets. They are fragmented, traditional, cash-based, and involve multiple players. Hence, transaction costs remains high. A simple analysis of the difference between farm gate and retail prices shows that there is a considerable inefficiency cost imposed by the archaic nature of our markets.

As a result, oligopolies are prevalent. Trade, wholesale, and retail markets are dominated by a few traders with considerable price-fixing capabilities, and inclinations. Often, market chains are defined by kinship. Such arrangements are exclusionary and raise the cost of entry to unaffordable levels. As they operate in a semi-informal way, they also reduce the tax take.

Market reform is therefore much needed. But the treatment should be directed at the pain. The solution to the economic imbalances and market distortions is not opening up for foreign investors, the IMF’s tried and failed remedy. Our rebalancing and reforming must prioritize Ethiopian businesses. The privatization of SoEs and implementation of public-private partnerships ought to maximize local participation.

Market reform is therefore much needed

We desperately need to build a local entrepreneurial base, but not in a protective environment. Rather, competition ought to be the name of the game, after the government improves the operating environment for all players. And that also means the red carpet rolled out for heavily incentivized foreign investors must be rolled back.

When FDI is attracted, it should facilitate industrial linkage and enhance the productivity, management capability and technological knowhow of local partners. Joint ventures ought to be incentivized and a clear policy on technology transfer introduced.

When reading the IMF’s reheated neoliberal prescriptions, it’s important to look beyond the obvious. We could all see that the ‘Meles model’ was running out of steam and into problems, but the medicine must be strategic, and above all it must be homegrown. There is a pressing need when assessing the IMF’s role to question the intent, check historical trends, and scrutinize recommendations based on the reality on the ground. Right now, the suggested path appears to risk severe markets shocks, widening inequality, and a reduced prospect of vital structural transformation.

As Ethiopia transitions from a China-dependent authoritarian system to a Western-looking talk-nice one, practicing market fundamentalism won’t solve our problems.

Sug. 25, Ethiopia’s privatization bonanza. Why selling the crown jewels is (mostly) smart, and how to do it

Getachew's a public policy consultant with over 14 years' experience. Educated in development, macroeconomics and business, he's an analyst with a critical mindset learned from his uncle. Email him at getupfront@gmail.com