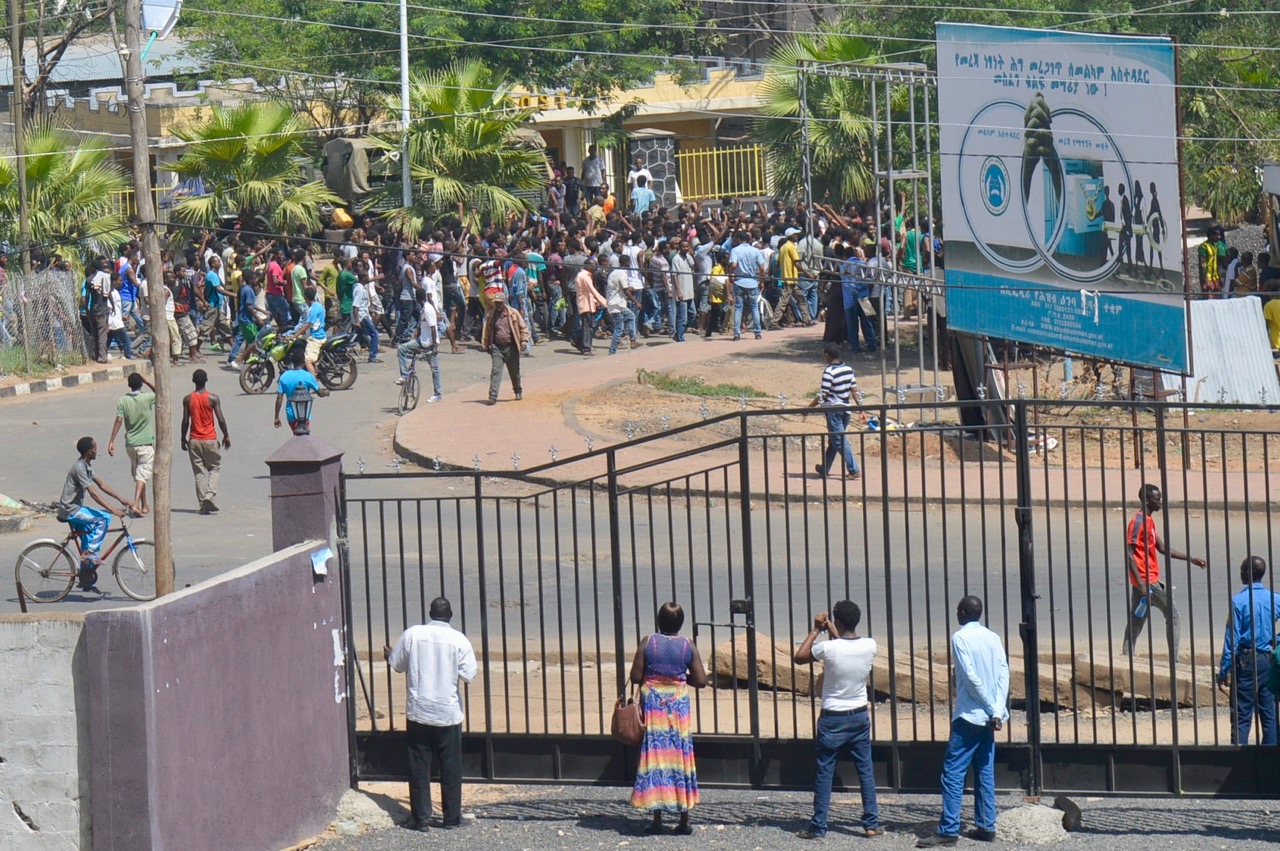 Amid Ethiopia’s new political dispensation, today is the first time that the Anuak people in Gambella will be able to openly commemorate the anniversary of a shocking massacre.

Civil servants, traders, and daily laborers, alongside uniformed soldiers, marched on the streets of Gambella chanting slogans such as “today is the day of killing Anuak” and indiscriminately murdered men and children, raped women and burned homes to the ground.

The assailants targeted their colleagues and neighbors on Saturday, Dec. 13, 2003. Their targets were the Anuak people who are indigenous to Gambella. In just three days they killed at least 400 people and displaced 70,000 more.

The Anuak Nilotic society, whose homelands stretches across South Sudan-Akobo, Pochala, and Nassir, along the Sobat basin, have for decades been victims of widespread state-sponsored abuses since the Gambella enclave became part of the modern Ethiopian nation-state in 1898.

The Anuak agony begun in 1974 when the military junta with its socialist ideology declared state ownership of land, which destroyed their traditional political system, cultural values and norms, and economic self-reliance. In 1980s, the junta settled large numbers of Tigray, Amhara, Kambata, and Hadiya among the Anuak and cleared vast tracts of fertile land they used for hunting, fishing, grazing and growing crops. They also constructed a dam on the Alwero River, a lifeline for large Anuak population of Abobo district, and settled more than half a million refugees among them, intensifying a cycle of violent conflicts.

The Anuak’s sad story of oppression is part of a culture of impunity that the Ethiopian state has subjected its citizens to. Now there is a new political dispensation that offers the opportunity for the Anuak to properly commemorate victims of atrocities for the first time, making today important in many ways. Firstly, it shames the perpetrators of heinous crimes.

The culture of impunity must end

Secondly, the 15th anniversary not only reminds the Anuak community about the failure of state responsibilities to protect citizens and the absence of rule of law, but it also sends a strong message to the authorities to outlaw a culture of impunity and discrimination based on ethnicity, religion and political affiliation. It also sets an example to other Ethiopians who have suffered similar atrocities and also grieved in silence, and opens the possibility of negotiating a National Memorial Day.

Sadly, the Anuak’s largely untold story is still fresh a decade and a half later. The state has neither apprehended suspects for atrocities nor served apologies or compensated victims’ families and survivors for heinous state-sponsored crimes. Instead, it continues to live in denial. Unidentified gunmen ambushed a vehicle belonging to the Administration for Refugees and Returnees Affairs, which was used as a pretext for unleashing terror. The anniversary today could, perhaps, signal not just the end of impunity but also the culture of hatred planted by a state system that discriminates against indigenous communities, despite claims to protect them.

December 13, however, has long been on the agenda of Anuak in exile. Every year since 2004, the Anuak in refugee camps in Kenya, South Sudan and Uganda, as well as Anuak in South Sudan, Europe, Australia and North America; Canada and the USA, commemorate this day with praises, hymns and cultural dances.

Now that the day is commemorated in Ethiopia, it will become an important annual event, signifying Anuak mass displacement and attempts to exterminate them. The fear of imprisonment and arbitrary killings is set to disappear.The veil of fear has now been lifted, thanks to Prime Minister Abiy Ahmed’s reform. The spirit is there in Gambella to face this ugly day with hope. In other words, the Anuak community that had no fundamental liberty to mourn and remember with dignity, is able to openly express its feelings. Today therefore marks a new era for a small community that had a history of marginalization and injustice.

Of course, the troubled border region of Gambella has a long record of violence. Indeed, insecurity and poverty are its historical landmarks. In the past few decades, however, this has increased, with conflicts between the two major ethnic groups, the large South Sudanese refugee population, and other Ethiopians.

Frequent violence has a far-reaching impact on livelihoods and community relationships. The power dynamics in the region, with authorities in Addis Ababa dominating, fuel an already tense situation. Despite this government’s devolution of power, Gambella has been ruled from Addis Ababa, with advisors assigned from the center; symbolic and pseudo elections; regional governors imposed; and the army and parastatal institutions often intervening in local affairs. In practical terms, the system is a facade of democratization and decentralization in a nation state burdened by traditional beliefs, values, and norms.

The 15th anniversary takes place in a new local political dispensation also. A change of leadership in Gambella has just completed its second month. The credit goes to Dhaldim, a pressure group that took to Gambella’s streets to bring about political change and help remove Gatluak Tut and his administration. The group’s morale was boosted by the return of the Gambella Regional Movement from exile in September after the government amnesty and “medemer” policy. The Dhaldim group’s leader, Obang Oguta and two senior advisors, Dr Many Nyang and Kwaro Okwom Ojwato, were imprisoned, but have been released on bail.

It is this fluid political transition, led by Omot Ojulu Obup, former judge and anti-corruption agency head, that makes this year’s anniversary special, despite being commemorated in a tense environment. The transition is punctuated by hiccups here and there. For example, university students protested in Gambella Agricultural University, there are complaints of unemployment, and need for peace-making and reconciliation between different communities. Even in the state capital, tension often flares up between Anuak and Nuer; and recently included alleged poisoning of Anuak.

Youths protested for the first time

Anarchy best described the grim reality in Gambella town for the following two months. The Anuak and Nuer relationship became toxic and polarized along ethnic lines in support or against the incompetent and corrupt Gatluak Tut and Senay Akwor leadership. Gambella town divided; streets were deserted and undeclared stay-home protest tactics enforced. This paid off: it paralyzed the local economy and forced Gatluak Tut and his Deputy Senay to unexpectedly resign at a political evaluation that took place in Addis Ababa. Possibly federal officials put them under considerable pressure to do so.

The 15th anniversary is remembered for the hundreds of victims slain by bullets, slaughtered by knives and machetes, and burned alive just for being Anuak. It symbolizes solidarity after subjugation. Since the Gambella frontier was incorporated into modern Ethiopian nation state, the Anuak have seen their numbers dwindle, land and properties confiscated, political autonomy and cultural values eroded, people displaced and young men conscripted to the army to fight civil wars in the north.

Now this marginalized community is able to commemorate state-sponsored atrocities. This indicates how much the once powerful TPLF leadership has lost control and is now forced to listen to the grim testimonies of survivors and victims’ families.

The December 13 anniversary is everything for the Anuak.  For many, it is a symbol of physical loss, destruction of properties, tough life in refugee camps, and torture in custody. It is also marked to remember the Anuak lost in and around Abol-Openo, Abol-Gilo (Aguwor), Pinykew, Okuna, Pochala-Olura, Perbongo, and Obela, during the 17-year military junta.

For the first time today, victims’ families will be permitted to sit together to openly acknowledge deep sorrow and be joined by the wider society to mourn as a community, visit graves, and remember those buried en masse in unknown locations.

Let us hope this unique event will herald a brighter future for the long-suffering Anuak people.

Nyikaw is an indigenous people’s rights activist, political analyst, and the founder and director of Anywaa Survival Organisation (ASO)