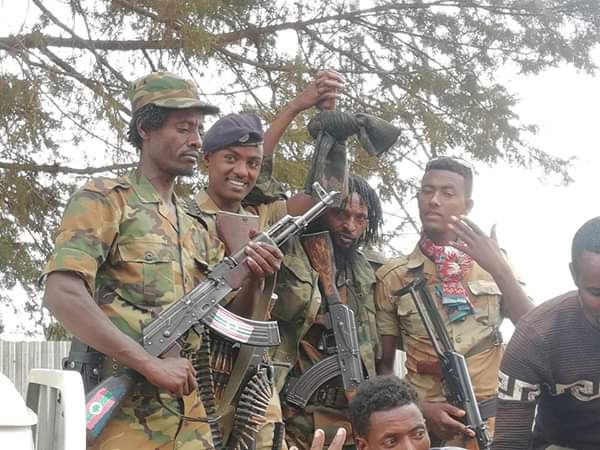 Several hundred Oromo Liberation Front fighters have come out of the bush to begin integration into the regional security forces in line with a January peace pact, although there are still reports of political disagreement and insecurity.

The former rebels went to temporary camps and most will be transported to Tollay, a military base. The encampment process scheduled for February 19 to 21 was extended to February 26. The western and southern Oromo Liberation Army (OLA) commanders, two key figures, said they distrusted mediators and so have not participated so far.

The western OLA leader, Kumsa Dirriba, known as Jaal Marroo, told BBC Afaan Oromo that the committee was unwilling to speak with him and that it was surrounded by soldiers on February 20. He blamed mediators for dividing his forces and said they remained under pursuit by the military. Committee secretary Jawar Mohammed said at the time that the team led by Abbaa Gadaa Beyene Sanbato and opposition politician Bekele Gerba was trying to meet Kumsa and had a military escort for protection.

Goollicha Dheengee, southern OLA commander, informed the BBC that he was not able to meet the committee because of the soldiers’ presence. Goollicha said they stipulated 11 preconditions to the committee. A source confirmed they included demands to an end to military attacks, the release of captured OLF members and supporters, and the registration of OLF as a political party.

Commanders received a letter nominally from the OLF leader Dawud Ibsa ordering them to cooperate with the committee, but Goollicha wasn’t sure Dawud authored it. Dawud was contacted but said he was unable to comment on the integration process over the phone. There are hopes the southern commander will meet mediators soon.

An OLF political officer, Lammi Begna, said Abbaa Gadaas and the committee did not contact some top OLA leaders, who objected to the short period given to encamp. “They felt mistreated for not being consulted as per the preconditions forwarded by the southern military commander,” he said in an interview. Instead, the technical committee approached lower-level OLA, which “triggered further mistrust” among the commanders, he said.

Hundee Dheeressaa, who claims to be a deputy of Kumsa, said on February 25 that fighters under his command from Gimbi to eastern Wollega were taken to Sankalle, Ambo police training center, and then to Tollay. That account was doubted via the OLF-affiliated Oromia News Network by Magarsa Lami, an OLA commander in East Guji Zone.

In Wollega, it is thought that OLA leaders like Kumsa exploited the relative weakness of the government last year following more than three years of civil unrest, and that disgruntled former protesters also joined the popular but disorganized OLF.

After a growing struggle between Oromia’s government and the front since the middle of last year, the Abbaa Gadaas and the female Haadha Siiqqee council said on January 13 that disputes between Oromo political parties had to stop. Initially, the ruling Oromo Democratic Party (ODP) did not agree with the suggested involvement of a third party in negotiations with OLF, but they accepted the elders’ offer on January 16.

Before agreeing to the request, the government announced that the OLA led by Elias Gambela from Guji has surrendered. Dawud claimed Elias had been ejected from the OLF for disciplinary reasons, showing the confusion caused by fragmentation of the front.

On January 22, Abbaa Gadaas and Haadha Siiqqees, based on the traditional way of reconciliation in Gadaa System, begged the parties to make peace. Dawud, representing OLF and Alemu Sime, the head of the ODP secretariat, representing Oromia, agreed. The technical committee was then formed of 71 people: 54 elders, 11 intellectuals and three from each party, before OLF gave responsibility for integrating OLA to Abbaa Gadaas.

The third peace deal between OLF and the government was finalized on January 24 in Ambo and a ceasefire started that day. The event was hosted by the technical committee in collaboration with Ambo University and Justice for All, a local NGO, and an ox was slaughtered according to Gadaa custom. The committee decided that OLA should be camped close to where they are within 10 days after an initial 10 days of preparation.

The backdrop to the Abbaa Gadaa mediation has been continued insecurity. Despite the agreement, there have been more killings and arrests targeting youths, traders, and teachers.

For example, on February 10, two teenage brothers were killed by Oromia police in their house next to their parents in East Wollega Zone’s Ebantu Woreda. On the same day, Daadhii Galaan, a writer and singer known for resistance songs, died from a gunshot on stage at an inauguration of a hotel in Liban Woreda of East Shoa Zone.

Two days later, five people including the bride and groom were killed by soldiers at their wedding ceremony in Hiddi Lola town of Miyo Woreda, Borena Zone. As OLA was supposed to be integrating, soldiers killed seven and injured six in Guji, including a pregnant woman, on February 21.

Many have been arrested

Four members of the technical committee were kidnapped by an unknown group in Anfillo Woreda of Kellem Wollega on February 21 and released two days later. The same occurred with the Dembi Dollo University president and bank managers in western Oromia. Two soldiers who raped a woman in front of her husband on January 25 in East Wollega Zone Sasigga Woreda were sentenced to 14 years’ imprisonment by Sasigga Woreda Court on February 16.

Since February 10, a teacher in Aira town, two people in Lataa Sibuu Woreda, another teacher in Mendi town in West Wollega Zone, two individuals in East Shoa Zone, and five in Borena Zone were killed by soldiers. And many have been arrested across Oromia, according to SBO, an OLF-affiliated media.

After peace efforts in November, there was hope an August agreement between OLF and the government would be implemented. But the military announced a new operation in December and deployed soldiers to where OLA was thought to be active. The Command Post formed to secure the Benishangul-Gumuz and Oromia border zone stretched throughout western Oromia and reportedly pursued OLA and OLF members and sympathizers.

In total, more than 1,000 people have been arrested for OLF links. The situation worsened on January 12 and 13 with airstrikes in Kellem Wollega, which the government denied, and bank robberies in Kellem and West Wollega zones. Internet has been blocked in swathes of western Oromia since mid-January.

OLF is still not registered

If integration is successful, then the focus should move to peaceful politics. OLF could potentially challenge ODP in elections next year, if it is able to exploit the current opening to become an organized electoral force. However, former OLF leaders like Leenco Lata and Kemal Gelchu have allied with the ruling party, and OLF is still not registered with the National Electoral Board of Ethiopia (NEBE).

Dawud told Ethiopia Insight in January that OLF was asked by NEBE to submit a document signed by founders. This is impossible as OLF was established in 1973 and the founders have left or are dead, Dawud said. He added that the recently approved Administrative Boundaries and Identity Issues and Reconciliation and Peace commissions excluded OLF, while its ideological opponents are present, as is Leenco.

OLF has agreed with the Oromo Federalist Congress, an opposition party led by Merera Gudina, that they will not field candidates against each other. Merera said in an interview  last month that splitting the vote would disadvantage both parties.

Jan. 19, The OLF is dead, but its Oromo struggle lives

Oct. 30, Rallies held in Oromia over threat to disarm OLF