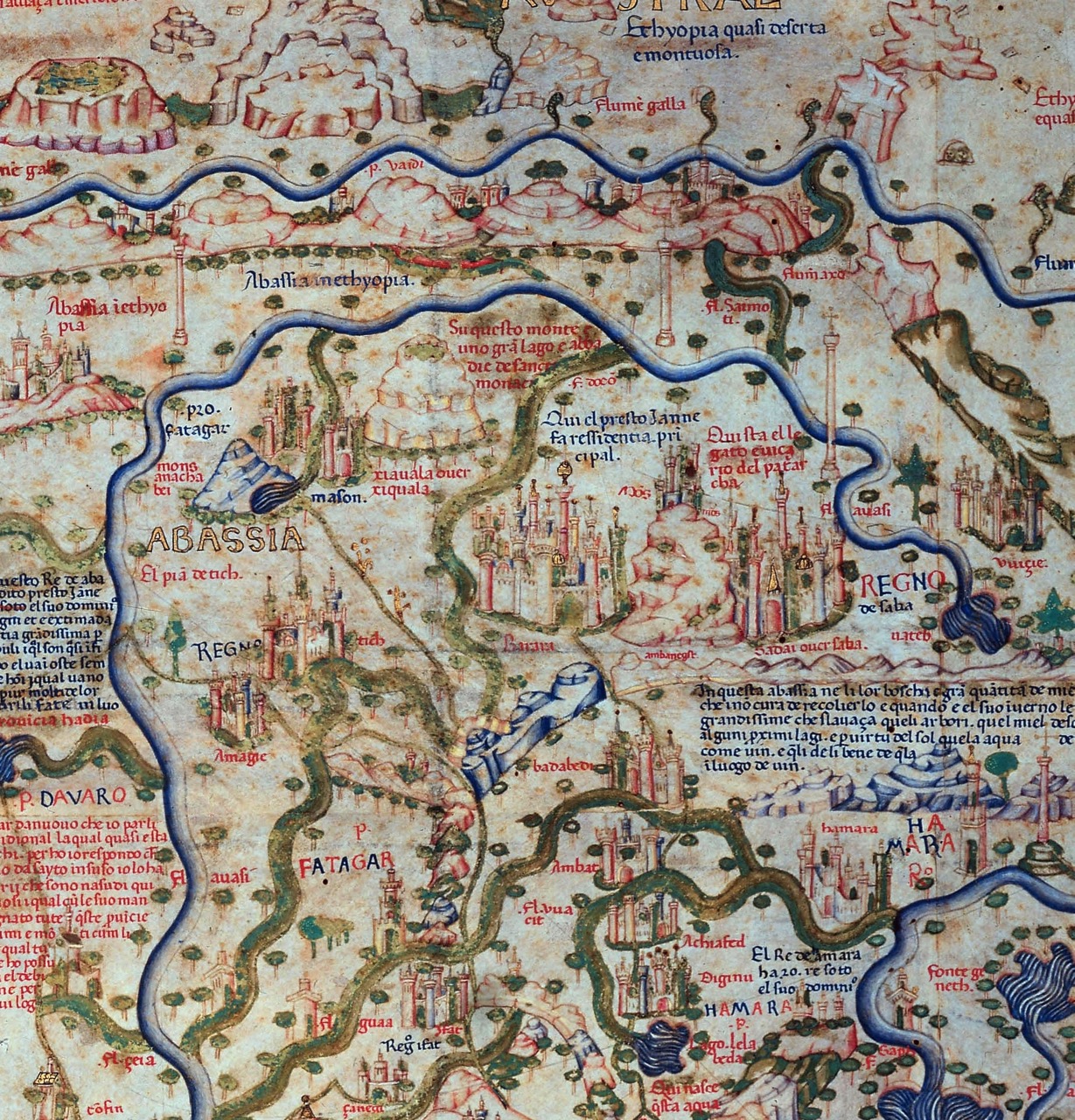 Based on a new reading of an old map, our fieldwork has unearthed what appears to be the remains of a once glorious city

In the mid-1400s, a scholar-monk name Fra Mauro, was commissioned to create a new world map based upon the most recent research and travel accounts from explorers across the world.

Through compiling notes, collecting maps, and interviewing travelers, ambassadors, and seafarers, empty spaces on his map blossomed into mysterious African cities or mountains tied to legends, and even the source of the Blue Nile. The resulting circular map, nearly two meters across, looks to be designed specifically as a laying out the foundations for a new world order. By drafting geographical features, regional and city names, navigable trade routes, across his mappa mundi, Fra Mauro identifies possible alliances alongside real and potential threats. Anything Christian, even the thinnest web of connectivity, is emphasized.

As to Abassia Ethyopia, Fra Mauro states in inscription number *98, “Because to some it will appear as a novelty that I should speak of these southern parts, which were almost unknown to the Ancients, I will reply that this entire drawing, from Sayto (Assiut, Egypt) upwards, I have had from those who were born there. These people were clerics who, with their own hands, drew for me these provinces and cites and rivers and mountains with their names; all these things I have not been able to put in due order for lack of space” (Falchetta, pps. 210-203).

Nearly six centuries on, having survived multiple European wars, these medieval icons of mountains and rivers, along with descriptions of rulers and names of now long-lost cities, made their way to us, as a digital copy. Our investigations in the field confirm the uncanny accuracy and completeness of Fra Mauro’s informants. It also indicates a far more complex and rich societal narrative of Ethiopia than is commonly portrayed.

Throughout Ethiopia, our recently identified sites, with divergent cultural material, beautifully illustrate this continuity of settlements from prehistory, to an unknown pre-Christian civilization contemporary with the Aksumite Empire, through to the pre-medieval and medieval periods, all the way into the conflicts of the last two centuries. Those sites include what our initial investigations strongly suggest is Barara, Ethiopia’s lost medieval city.

By the end of the 17th century, as with many regions across Africa, the ruinous religious wars of 1528-1543 caused migration, followed by the influx of shifting cultures and languages across Ethiopia. Such fluctuations displaced previously associated oral traditions and much place-memory.

Place names, however, recorded on old maps and in various chronicles and hagiographies, as well as Crawford’s Ethiopian Itineraries (1958), amply illustrate that prior to these religious wars, populations from a variety of cultures lived in mixed, settled communities throughout Ethiopia, much as they do today. Fra Mauro’s map states that certain regions, mountains, even cities, had variant names depending upon the people-groups living near by. Ceramics found at the site; S.W

As a result of these migrations, new settlement patterns and agricultural practices shifted the way land was utilized. What previously had constituted defensibility also shifted. The political landscapes and settlement densities moved to higher ground. Small land holdings replaced large urban centers. Across Ethiopia’s landscapes, centuries of agro-pastoralism have literally plowed the ruins of once-thriving metropolises into the ground.

Accounts of the destruction of Barara and other cities and churches, accurately depict that demolition was total. Our search to identify lost cities was exacerbated by a paucity of scholarship related to these eras. Additionally, the perception, given Addis Ababa’s modern status, seems to have tacitly colored the idea that it must have had medieval importance as well; a perception buttressed by various medieval sites on its fringes. But that does not mean it is hiding Barara, and it is hard to hide cultural materials, such as ceramics, stone tools, occupational soils, etc.

As we embarked on desk-based analysis of maps and written records, the two lost cities of Tegulet (1315)?, the first Restored Solomonic capital, and Barara (1385?), the Holy Grail of lost medieval African cities, asserted their presence. All place-memory of these medieval capitals had vanished. Local chronicles mentioned the importance and general region of Tegulet, but without specifics. Barara, though mentioned throughout Europe’s medieval period as the capital of Abyssinia, remained a mystery. Strikingly, local chronicles never mention that name. It is possible this is another example of cities retaining different names based upon populations.

Barara on the horizon

We decided first to investigate the southern ridges along the Germama and Kessem river drainage basins, and areas south of Sendafa, along the still visible ancient trade routes to regions north. Even today, this highland ridge route serves as a gateway from the plains and valleys in the south and east into the highlands of Gojam, Shewa, Gondor, and Wollo.

Here, I wish to recognize the late Richard Pankhurst and Hartwig Breternitz. Their excellent work sets the standard for proper, scholarly investigation of this, and other important sites. It is hoped our forthcoming published scientific research will emulate the valiant effort of these two gentlemen-scholars.

On our first excursions, we surveyed areas south of the Germama and Kessem rivers. What we discovered were substantial, previously unknown sites belonging to entirely unknown civilizations, contemporary with the end of the Aksumite empire (6th-7th Cent. CE) and into the early medieval periods. Prehistoric, pre-Christian and Islamic settlements dotted the landscape, and funerary markers, and even full cemeteries were recorded. The brilliant complexity disclosed in this newly revealed archaeological record illustrates the shifts and tides of peoples across these landscapes over millennia. But the common story they tell is of the continuity of the broader Ethiopian identity irrespective of modern, artificial standards based upon economics, national-tribal affinity, or religio-political terms.

Prior to the Religious Wars, Christian and Islamic kingdoms mutually relied upon trade. Skirmishes and conflict were not uncommon, but annihilation of one side or the other was never the goal. The dual outside influences of the Ottoman Empire and the expanding ambitions of Portugal, shifted Ethiopia’s local narrative in radically, irreversible ways.

In essence, the centuries-old tidal indigenous shifts and currents in hegemony and control of trade, took on global proportions, with a Jihadist mentality on one side, a Crusader fervency on the other. The resulting devastation brought about by this Mediterranean proxy war, has yet to be fully studied or appreciated in the region’s historicity.

As I returned to the maps, I discovered previous searchers consistently had compounded a singular error. The blue, three-peaked mountain of the Fra Mauro map north of Barara is not Entoto. Tucked away in the series of valleys north of the Germama river, at the confluence of the Filambo river, lies a region, aptly named, Sost Amba, “Three Peaks”. This three-peaked mountain range starts at Mt. Bereh, just northwest of Sendafa and continues up slope to the middle peak at the 2800 at the Fiche Genet pass to Debra Berhan. Profoundly, previous searches had taken everyone 20-30 kilometers too far west. One of hundreds of tombs across 5 cemeteries; S.W.

Our initial assessment indicates the Barara site covers more than two square kilometers, with large quantities of period-specific cultural material along with wheel-made and imported pottery sherds throughout. True occupational soils, over a meter thick, large architectural features including foundations for towers, five cemeteries, identified thus far, from different periods and cultures, one containing hundreds of tombs, prove this is a substantial site fitting all the criteria for a city the size and importance of Barara. The traditional saying from the elders is that this was a city that, “If you leave your home, you have difficulty returning.” The idea being the complexity and vastness made it a labyrinth.

Oral traditions and place names also fit exactly what we have sought. Bar, meaning gate, and, as Mt. Yerer is locally called, Arra, would indicate this is the gate to the region of ‘Arra, or Bar-‘Arra. The local name of the site, translated “The Assembly of Multitudes”, retains the importance this region held in earlier time. Other interpretations of the meaning for Barara refer to “light” or “redemption.” Future research may tie the traditional Ethiopic name to the site we now identified with Barara.

The scattered sites of Entoto or the setting of Addis Ababa are often claimed to be synonymous with Barara. From a professional, archaeological standpoint, the site we have identified as the probable location of Barara, is exactly what we would expect for a city with pre-medieval, medieval, and post-medieval occupational contexts. Still today, the villages atop the knoll and settlements south contain mixed, Christian and Islamic communities.

Additionally, it is exactly where Fra Mauro’s informants claimed it to be. The consistent misreading of a map, notwithstanding, Barara is clearly indicated as directly south of Sost Amba, east of the bend in the Akaki river, northwest of the confluence of the Dukem and Mojo rivers, and west of the fertile Tich plain. The newly identified sites of Sadai, Tegulet, or Barara, therefore, contain fantastic archaeological value and potential.

Fully aware of the sensitivities related to this entire discourse, we have diligently worked directly with the Ministry and Bureau heads for Culture and Tourism for well over two years. We are in the process of accurately and professionally compiling and presenting our forthcoming publications and research for the identification of Barara. This is scholarly research, and as such, requires we continue to work with local, state, and federal partners to ensure this information is utilized for the benefit of all Ethiopians.

Going forward, the discussion should be about how we tie the broader, full archaeological record to the facts on the ground. This discovery is not about Entoto, or Addis Ababa, or Finfinnee, or Barara, or Tegulet. This is a story of the continuity of the weaving of an intricate and vibrant tapestry of Ethiopianness from the prehistory, through to today

All our discoveries thus far provide a promising beginning. Using our research template, we continue seeking and identifying lost cities and ruins strewn across Ethiopia’s magnificent and varied landscapes. Regarding our regions in Africa then, it appears the Fra Mauro map has proven itself far more than the fanciful rendering of a medieval mind. It is indeed a prescient icon of a Mappa Mundi that launched thousands of ships.

Questions inevitably remain pertaining to the poorly understood, yet complex subjects around ancient and medieval studies within Ethiopia and the broader regional contexts. Ethiopia must be reminded of the larger, deeper significance of its own history and heritage and take its rightful place in the histories of civilizations.

Main photo: The section of the Fra Mauro map showing Barara. Note: Top to bottom is south to north.

Samuel, an archaeologist raised in East Africa, seeks to create an Afrocentric historical narrative. His 27 years of research in the Middle East, Western Pacific and Ethiopia inform his worldview.