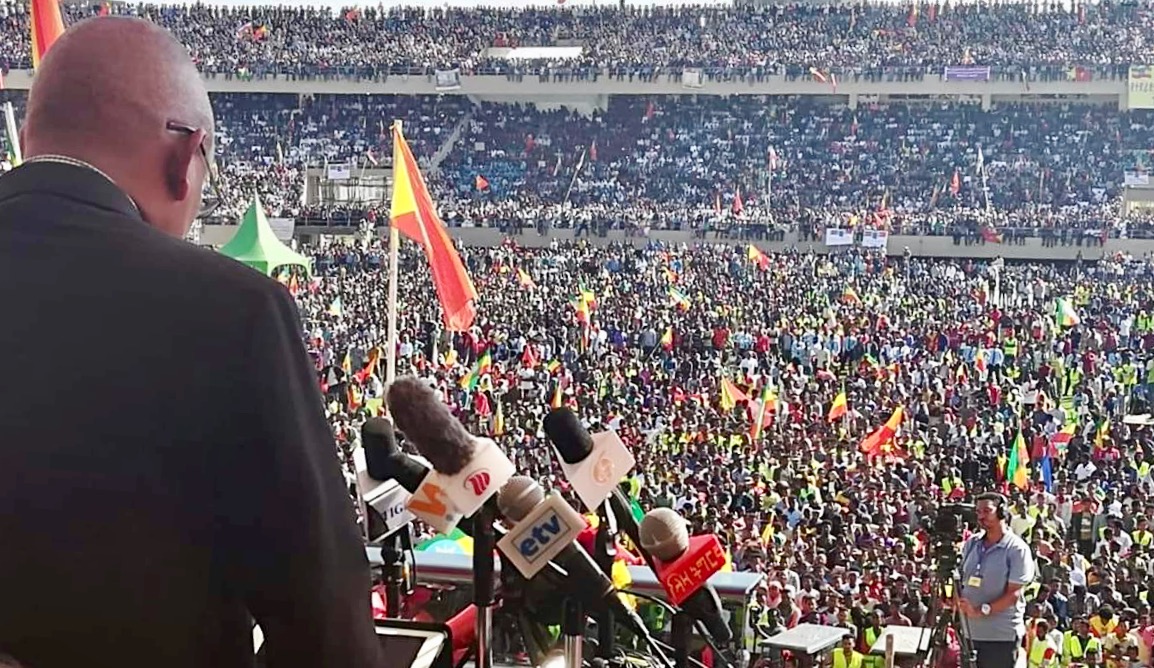 With Abiy Ahmed as Prime Minister and the end of Tigray People’s Liberation Front’s hegemony, Ethiopia’s political climate has become saturated with anti-Tigrayan sentiment that has contributed to the isolation of the former northern powerhouse.

As a result, the region’s acting president and TPLF chairman, Debretsion Gebremichael, has received unprecedented support and praise, looked up to almost as the region’s savior. Despite the scars of economic deprivation his party imprinted on the region over the past two decades, the events of this past year led to public acceptance of him, giving the leader the benefit of the doubt in several regards.

These events have also increased the complexity within Tigrayan internal politics that poses new concerns for the region’s leadership, as different interest groups assert themselves in the political sphere.

Tigray’s politics are shrouded in the ambiguous predicament of its ruling party, TPLF. This is now embodied primarily through Debretsion, who secured his leadership position in the party after heavyweights were sidelined at a meeting in November 2017. While this meeting represented the deepest tehadso (renewal) since 2001, Debretsion has maintained the party’s politics of ambivalence and, from the outside, it remains difficult to comprehend its strategy.

One question is which actors have risen to prominence within the past year that could sway the party’s pendulum? It is critical to identify who gained influence, as this helps define Debretsion’s challenges. Currently in Tigray, the embattled region’s leader is spread thin between three categories: the power hungry, the affluent elite, and the old guards of Tigrayan politics and TPLF.

These three broad groups have all established media and social media platforms to try to mobilize people behind their interests, and have all gained significant support bases in Tigray. The categories are not mutually exclusive, as their interests overlap at times. However, as they try and exert significant pressure on Debretsion, it has pulled him in different directions, impaired his judgement, and led to inconsistent decision-making. The leader has been forced to try to accommodate the ascendant interests and movements in order to reassert and maintain his power.

The power-hungry category primarily comprises Mekele University academics and ethno-nationalists whose interests are for Debretsion to maintain hostile relations with the central government as well as with his constituents, leaving his leadership economically and politically hollow, and creating an opportunity to eventually usurp power. Those that fall into this category have strategically gained the support of the masses in Tigray by sensationalizing issues and spreading nationalism.

This group is critical of TPLF and its administration of Tigray in the past 28 years, pointing to widespread nepotism and cronyism, and the abandonment of the Tigrayan masses. They use fear tactics by centering discourse on the violent events of the past few years, despite discontent and unrest occurring nationwide.

This politically ambitious group also criticize the absence of nationalist leadership, implicating that TPLF’s role in this regard is insufficient. In relations with the rest of the federation, they bargain via threats of secession (although this is seen as highly unlikely by some commentators) and threats that Ethiopia is destined to collapse without Tigray.

However, it is important to note that the claims made by this group are hypocritical; since power is the ultimate goal, this rhetoric is used in order to resonate with the people. Once they have successfully gained their objectives, Tigray will likely be back to square one. All relevant discourse and rhetoric focused on Tigray’s isolation, secession, and Tigray-Eritrea relations will probably cease once political power has been achieved. Most newly emerged parties such as Baytona and Salsay Woyane fall into this category, as well as local civic organizations such as SebHidri and pro-secession groups.

The Tigrayan elite class and the influence of their wealth also form a distinct group whose interests Debretsion must acknowledge but not succumb to. These economic class vessels of the region, who mostly still live in Addis Ababa, have been pushing for Debretsion to remain defensive and continue to challenge the central government, until the pushing out of investors and elites comes to a halt. This group has been labeled the “developmental investors” (ልምዓታዊ ባዓል ሃፍቲ) by Debretsion’s regime. It includes large-scale general contractors and multimillionaire investors.

Individuals in this group depend on their wealth—whether it be in Addis Ababa or Mekele or kept abroad—in order to influence the political dynamics. They have historically been extremely privileged with a strong sense of entitlement, believing that they are the sole saviors of the region and the key to Tigray’s economic prosperity. They participate in peace processes led by Abiy or in fundraising (i.e. Tigray Development Association), while displaying solidarity with Tigray through investments. Although this is directed towards their own personal gain and benefit, as is the case with much charity, it is delivered under a veil of patriotism. They feel as though TPLF owes them for their contributions, despite the wealth they accrued while the masses in Tigray were suffering.

As aforementioned, the prominence of this group and their influence stems from their prosperity. As long as their investment opportunities are constrained under Abiy Ahmed’s government, they will continue to manipulate and sway Debretsion, playing the ethnic card to threaten calling it a day with Ethiopia.

However, compared to other influential political groups in Tigray, the affluent elite have endorsed the recent change under the premise that damage could have been significantly worse. Their concerns swing on how the turmoil has the potential to impact their businesses, not the survival of TPLF.

In general, this group has not sustained close relations with Debretsion, but have kept him at arm’s length, while ensuring to stay up to date on the politics of Ethiopia and Eritrea. They are opportunists, ensuring that they are at least defended and praised by Debretsion. In comparison to the politically power hungry, this group craves economic power.

The third distinct group with influence that acting president Debretsion must deal with are those who have been involved in regional politics for years, primarily emanating from within TPLF. The group is commonly referred to as the “old guards.” They continue to stand firm in their belief that they are the most knowledgeable regarding Ethiopia and its politics. They act as prophets yet make political miscalculations by relying on bogus news and social or electronic media tabloids like and Wurayna and Aiga Forum.

With the people despairing at the central government’s failure to bring stability, they believe a restoration of the status quo ante would bring an end to the problems. Compared to the politically and economically power hungry, the old guards pose a larger danger as they pursue both political and economic power.

Debretsion and his administration’s attempts to appease each of these groups has been done at the expense of the rest of Tigray’s population. Torn between accommodating the interests of these influential actors, the leader has failed to fulfil the basic needs of the people in regards to fair wealth distribution, freedom of speech, and demands for local administrators to be drawn from the community, to name a few.

In addition to positively influencing the regional government’s ability to serve its people, they also have not applied pressure on TPLF for internal reform. For example, while the federal government released tens of thousands of prisoners as part of a political amnesty, Tigray region did not. In general, the three groups ignore political prisoners languishing in Tigrayan prisons. Some of them have, however, campaigned for the release of federal “political prisoners” such as Biniam Tewolde, Abiy’s former INSA colleague, using a social movement called Global Movement for the Liberation of Tigrayan Political Prisoners (“ወፍሪ ሓርነት”)”.

The campaign is ironic given that the first two groups were responsible for persuading TPLF to go on the post-2010 arrest spree that was corrected last year with the amnesty, and the third group of the old guards were the ones that directed the arrests.

Debretsion has kept his region peaceful until now. But, there are urgent multifaceted challenges regionally and nationally that need to be addressed. It is time for the region to move beyond its authoritarian past and build a democracy that matches the aspirations of its people and supports its development. Rather than try and become a coercive leader, Debretsion should work out the disposition of the power players and devise an appropriate strategy so TPLF can avoid becoming dominated by one or another faction.

If he cannot properly lead his party and pass key decisions, it indicates that no party will be able to cut a deal on matters of national interest without having the full support and approval of these three groups. This predicament will have the far-reaching consequence of impairing the bargaining power of Tigray in its dealings with other regions and the federal government.

In the interim, there appears to be strong support for Debretsion that may boost his confidence, but, if key political reforms are not introduced, the current system will not produce a stable political order in Tigray. Political and governance improvement have been long delayed. There is a pressing need for a new covenant involving all elite groups representing the dominant narratives of statehood in Tigray to formulate a new way of handling differences peacefully.

Tigray has presented itself as unified during the transition when in actuality the political scene in the region is complex and fragmented. Each of the three main groups are confident in their ability to secure the power they are pursuing, continuously attempting to influence Debretsion. The acting president is now faced with the challenge of standing his ground, addressing the interests of the influential groups, and serving as the leader for all the people of Tigray.

Main photo: Debretsion making a speech appealing to the federal government for constitutional adherence at a December 8 rally in Mekele, the capital of Tigray.

Aug. 7, 2019 Ethiopia and Eritrea’s peace must be rooted in past

Jan. 17, 2019 Is Tigray really a drop in the bucket for Abiy’s administration?

Ermias is an Ethiopian-American architect who lives in New York City. He can reached at e.amare@gmail.com or followed on Twitter @ErmyH_NYC