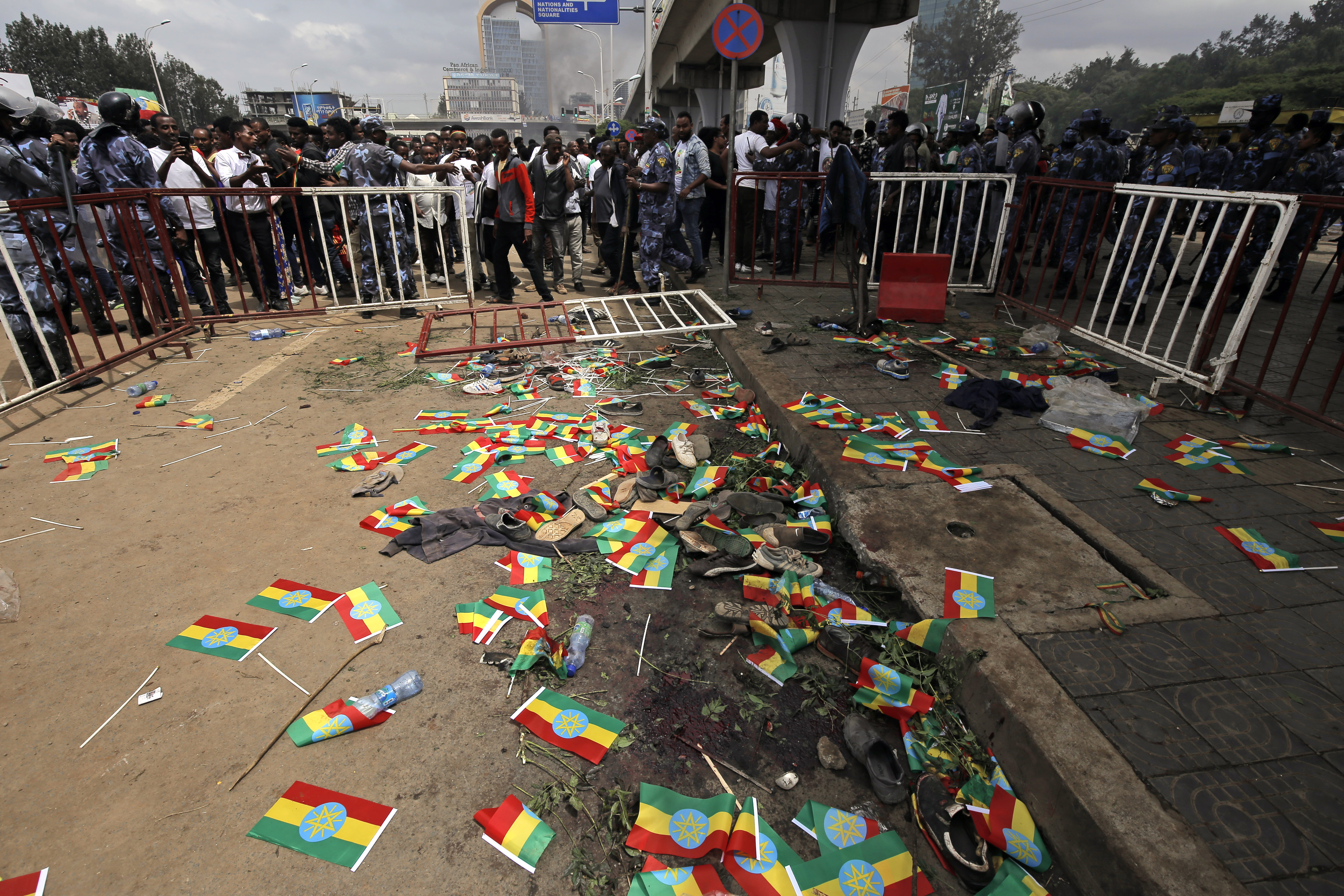 The rise in violent ethnic conflict in Ethiopia in recent years can largely be linked to the sharp increase in militant ethnic nationalism against a backdrop of state and party fragility.

Decades of exclusivist political arrangements have contributed to a steady rise in ethnic consciousness, with the state and ruling party becoming increasingly incoherent. This has increased ethnic disagreement.

High-level negotiations aided by nationwide and inclusive dialogue could help stabilise the country, writes Semir Yusuf, senior researcher on the Horn of Africa in the Institute for Security Studies’ Addis Ababa office.

Over the past two years, Ethiopia has experienced both rapid political liberalisation and a surge in violent conflicts. The surge in violence is largely due to a rise in militant, competing ethnic nationalisms in the context of perceived fragility of state and party institutions. The two forces have been closely and cyclically influencing each other for decades.

Exclusivist and authoritarian political institutions since the imperial (1930–1974) and military (1974–1991) eras have played a role in the emergence and ripening of contending nationalisms in the country. Centralised but federated political institutions during the Ethiopian People’s Revolutionary Democratic Front (EPRDF) era have further complicated the nationalist scene by creating multiple lines of ethno-nationalist struggles in Ethiopia.

From mid-2010 onwards, rising competing ethno-nationalisms led to the relative weakening of party and state structures, resulting in the intensification of ethnic mobilisations. The outcome was deadly. At a micro level, security challenges and a concern for group worth have fuelled violence.

With the perceived fragility of the state and ruling party, elites have further exacerbated the conflicts for opportunistic reasons. The economic downturn has played a role both as a source of grievance – facilitating ethnic mobilisation – and also as a factor that makes it easier for some to engage in violence, since they feel they have little to lose.

To sustainably tackle the problem of violence in Ethiopia, the institutional and ideological context of the country must urgently be changed. The ruling party, the main actor in charge of the country’s political processes, needs transformation both within its constituent parties and the coalition as a whole. The constituent parties need to prioritise unity, with a clear negotiated vision and party discipline.

Then they need to strike a balance between their particular interests regarding their constituencies, and responsibility of the coalition as a whole. This is needed to maintain stability and ensure the country’s smooth transition. Reprioritising interests is of critical importance. Candid inter-party discussions with a genuine attempt to incorporate the reasonable fears and demands of all parties into the transition process are vital. The EPRDF leadership should prioritise such negotiated deals over rushed party merger.

Moreover, inclusive political dialogue among other political actors is necessary to help detoxify the political environment and pave the way for effective state reconstruction. These forces must focus their efforts on concrete constitutional design options or public policy alternatives that could incorporate the reasonable interests and tackle the fears of all political groups. Contentious issues and agendas over borders, territorial disputes, minority rights and autonomy demands should be part of the wider exercise to restructure the state in an inclusive manner.

Finally, the state should reclaim its autonomy from mob influences; renegotiate and clarify the new intergovernmental power relations; and step up its ability to contain and prevent violent conflicts in a professional and human rights-sensitive manner.

Since April 2018, Ethiopia has seen a political liberalisation acclaimed worldwide for its pace and breadth. In its first year of office, the new government unblocked hundreds of jammed news sites, expanding media freedom; released thousands of political prisoners; welcomed banned political groups to operate freely in the country; appointed non-party figures to positions of influence; and revoked repressive laws once used to target political opponents. These moves lifted the hopes and morale of many Ethiopians who would remember the recent past unfavourably.

At the same time, however, Ethiopia has witnessed a surge in violent conflicts for much of the past two years. Despite an impressive record in the arena of political opening spearheaded by the new government, the country has experienced large-scale displacements, killings and destruction of property.

The incidents are not confined to a specific region, but are spread almost all over the country. In most cases, they have ethnic overtones or involve ethnic groups. Although Ethiopia is not new to ethnic-based conflicts, their scale and intensity in the short time since Prime Minister Abiy Ahmed Ali’s rise to power has been alarming.

The question then is, why has ethnic-based violence spiralled especially since 2018, in part coinciding with the onset of political liberalisation? What major underlying factors contribute to the fueling of conflicts and are common to most cases of conflict?2 This monograph tackles this question. It addresses it based on extensive insights gathered from the existing relevant literature on conflicts and field work in different parts of the country.

The fresh and dynamic framework of analysis employed in this monograph emphasises two factors – state and party institutions and nationalist mobilisations, and their interactions. It is argued that political institutions shape contentious nationalisms that in turn weaken those institutions, leading to further nationalist competition resulting in violence. Translated into the Ethiopian case, the monograph contends that:

Economic downturn further complicated the already tense situation. The outcome was a worrisome proliferation of violent ethnic-based conflicts throughout the country. In the analysis, elite interests and calculations are factored in especially in the process of mobilisation, but their roles are amplified in the context of institutional dynamics. These dynamics shape their attitudes and interests, and facilitate nationalist propagation. This doesn’t deprive them of agency but contextualises that agency and gives it certain predictability.

The research also zooms in on the nationalist dynamics at a micro level. How exactly do nationalist mobilisations end up being bloody? Two concepts are emphasised: the invidious comparison of Donald Horowitz and the security dilemma of the Realist school of thought in international relations.

According to Horowitz, the bond that ties the individual’s worth to the group’s, and the drive to gauge the group’s worth in contrast to another’s, gives nationalism a strong appeal to the nationalist, making even killing or dying for the cause acceptable. Furthermore, once imbibed, as Realism affirms, nationalist competitions are informed by the self-reinforcing logic of power building to preserve one’s security (and self-worth).

This spurs a spate of power build-up and counter-power build-up between groups, leading to a generally hostile and insecure environment for each, and perhaps to violent conflicts as well. This doesn’t however mean that all violent conflicts in Ethiopia happen for nationalist reasons. Hence the research adds another layer to the analysis by bringing in elites that promote their own material agendas to the extent that institutional conditions allow.

The goal of the monograph is not to map conflicts or produce a database of them. It rather aims to provide a theoretically informed and empirically grounded analysis of the causes of the conflicts. It also provides some recommendations that could contribute towards transformation. The significance of the monograph lies not necessarily in providing detailed information on particular cases of conflict, but in offering a framework to understand factors giving rise to their eruption and intensification. It also helps in searching for holistic and effective ways to resolve the conflicts.

Despite widespread violence, Ethiopia hasn’t descended into utter chaos as a country. Many people still lead ordinary lives, not necessarily directly affected by the recent round of conflicts, although with security concerns of differing levels of gravity. Hence the conflict-centred analysis offered here should not imply that the country is heading towards an apocalypse. Its goal is just to address the root causes of actual and potential conflicts in the country, without assuming that the trend will necessarily continue unabated or that it will engulf the entire country.

Moreover, it is recommended that more research be done especially from the side of peacemaking, investigating the diverse forces that have curbed further bloodshed in Ethiopia. Such works could complement the findings of the current study that focused on what actually happened, rather than what could have happened, and how that worst-case scenario was averted.

Field work was a major part of the research process. Perspectives and information on relevant issues were gathered from various sources. Trips were made to some hotspot areas of the country, and 60 people of diverse ethnic and professional backgrounds were interviewed. However due to the country’s security situation, not all sites of violence could be covered in the field work. So instead of travelling to all those regions, people from or affiliated to those areas were interviewed. It is hoped that these interviews provide a perspective as close to the ground as possible.

The monograph begins with a short summary of the conflict scene in Ethiopia today. It then discusses the institutional context and development of ethno-nationalism. Next it delves into the proliferation of conflicts within the ambit of contending nationalisms. Then it returns to institutional dynamics to show the fragility of party and state, and how that also contributed to the prevalence of ethnic-based violence. The monograph ends a conclusion and recommendations.

Violent conflicts have sporadically ravaged several localities in many regions in Ethiopia since early 2018, although many are apparently now subsiding. This has led to a massive displacement of people. In 2018 Ethiopia ‘had the highest number of new internal displacements associated with conflict worldwide.’ Inter-ethnic violence that year caused ‘almost 2.9 million new displacements, four times the figure for 2017.

Although the government disputes this figure, sources agree on the rise in displacements over recent years. The major hotspot regions in the country for the past year and a half include the north-eastern, north-western and western Amhara Region; several weredas in the Benishangul-Gumuz Region; western, southern and central Oromia; bordering areas between Oromia and Somali Region; and eastern and north-eastern parts of the Southern Nations, Nationalities, and Peoples’ Region.

Most of these have been marked as areas that have witnessed high-intensity conflicts in recent times by conflict mapping conducted by the United Nations Development Programme this year. Several other locations have also witnessed low- and medium-scale violence, at times perceived as high by locals comparing them with incidents of violence there in recent memory.

Semir is a senior researcher on the Horn of Africa in the Institute for Security Studies’ Addis Ababa office. He obtained his PhD from the University of Toronto in comparative politics and development studies.