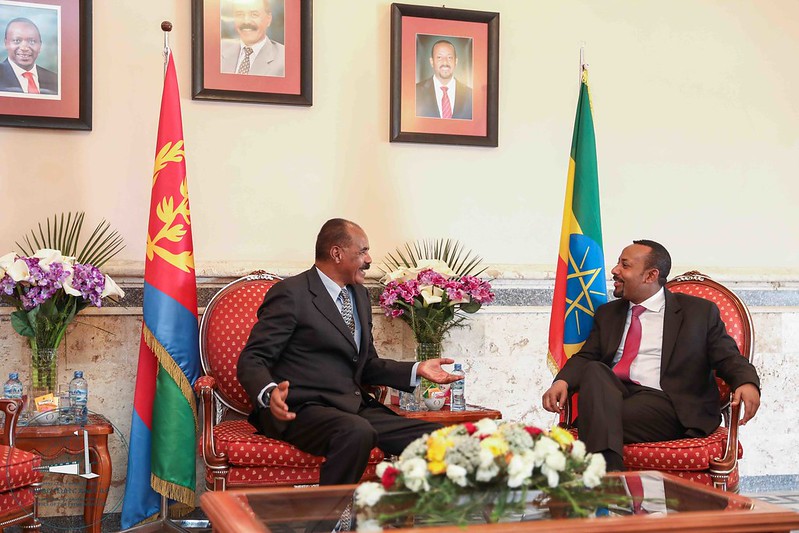 On February 7, Eritrean state television broadcast a Tigrinya interview of more than two hours with Eritrean President Isaias Afewerki where he criticized at length Ethiopia’s multinational constitutional order and the “narrow clique” that promoted it. Below are translated excerpts.

The reason why this area is immersed in unceasing conflict is because of the direct interference of external forces. The enduring bloodshed in parts of the Horn of Africa is the upshot of substantial impact of these hostile powers.

After the completion of the Cold War, we had not carefully understood the dramatic repercussions of the war. The dangerous after-effects of the war have caused internal threats in Ethiopia. The present-day ethnic federalism was not single-handedly promoted by the narrow clique. External powers have played their fair share in establishing such a system for their benefit when Ethiopia became free from the military regime in 1991.

Ethnic-centered administration has severely damaged Ethiopia. The system has empowered deliberate ethnic schisms among the peoples of Ethiopia. It is impossible to have an appropriate process of nation-building once you have institutionalized ethnic schism on the authority of pretentious federalism. Taking everything into account, the system of ethnic federalism applied in Ethiopia for the past 20 years and more by the narrow clique is bankrupted now. In our language it is called ‘game over’. And Ethiopians have said ‘enough’.

Badme and its surroundings are still occupied by Ethiopia

Following the uncompromising opposition, Abiy has taken an outstanding and brave decision of embracing a new multi-faceted political reform in Ethiopia. He managed to reform the previous state of play which Ethiopia had faced for years.

The politics, approach, and objectives of this narrow clique are disastrous.

And now, disgracefully, this narrow clique is saying that if Abiy’s rapprochement between Eritrea and Ethiopia is rewarding, where is the peace on the ground?

Even though we have made a rapprochement, Badme and its surroundings are still occupied by Ethiopia. This is happening because the narrow clique, which administers the region, is impeding execution of the decision of the border commission as a tactic for its survival.

The situation in Badme is becoming worse and worse ever more. Do you understand why we choose to be tolerant? It is because the narrow clique is exploiting the enduring political unrest in the country. Who is assigning land in Badme presently? Why are many houses erecting in Badme? What are the valid laws to distribute the land in Badme, while they are calling for reconciliation with Eritrea?

All in all, the narrow clique is applying full force to invalidate the endeavors of the rapprochement and it has intended essentially to overturn the overall achievements of the ongoing reform in Ethiopia.

With regards to Eritrea, the narrow clique is ploughing a siege mentality in the people, saying you have been encircled in all corners.

As it is remembered, they devised the policy of immigration to weaken Eritrea. There are different sorts of challenges in Ethiopia. For that reason, this narrow clique is carrying out all sorts of tussles with the purpose of hampering healthy relationship between both nations.

That is not scary though. What matters most is the internal conditions of Ethiopia.

Abiy has taken the courageous decision of introducing reform. But, what is he going to do in the end? Once Abiy has achieved his initial objective, we don’t believe everything is solved until we see the last results. We are not saying this because we are extremely genius or anything else. However, our historic experience tells us so.

When you say, ‘I am federalist’, what is federalism?

How are we going to achieve lasting results? How are we going to bring sustainable peace and cooperation? Peace comes through real work. Peace prevails through genuine solidarity. This is not the issue of border conflict. That is not our challenge. There are other external powers who are jointly working with the narrow clique of Ethiopia to hurt Eritrea. If we fail to frame a strong foundation for the enduring reform in Ethiopia, we can be victims of political turmoil stemming from Ethiopia. We don’t want to fully interfere in deciphering the poisons of ethnic federalism. That is their internal issue. However, we won’t be silent until it victimizes Eritrea and that is why we are working together with Abiy Ahmed.

We need not say everything is going to be solved in view of the present reform as we would be politically naïve and gullible. We know that apart from the conflict-ridden interest of the internal narrow cliques, external forces are working hard to disrupt the situation. We will seriously scrutinize their engagements. All these forces are partaking in the internal affairs of Ethiopia. Nonetheless, the most dangerous political threat is the precarious internal unsteadiness of Ethiopia. It is easy to spread hatred. But it is difficult to bring peace by neutralizing hatred.

Ethnic polarization has reached in its peak. It won’t be easily cured by means of a single remedy. We need not to discern it as an ordinary conflict. New scenarios are emerging every time. These ultimatums are altering their characteristics constantly.

Yet, our cooperation and solidarity won’t be troubled, rather it is increasingly hardening. We may encounter some daunting actions; yet we won’t change our relationship with Ethiopia.

One of the contested matters in Ethiopia presently is the issue of election. This is according to the traditional culture of politics. This is not a worthy issue by itself. It will hinder the attention of the government on the other important issues of the country, if the disagreement on matters of election becomes more to the fore. There are many actors in this election. If we need genuine political transformation, we should consider the issues properly. There are experienced international institutions knowledgeable in research. These institutions are analyzing the situation poorly, exploiting the situation.

We can defend ourselves for any potential conflict coming out from Ethiopia. However, Ethiopia is a big nation. It has its own significant role in our region.

All internal political powers are propagating very shallow judgements.  When you say, ‘I am federalist’, what is federalism? When you say ‘I am unionist’, what is unionist? I am highlighting the difficulties of the situation. We can alleviate the bad consequences of ethnic federalism if we study the problem properly.

Dear President, after the new leadership came to power in Ethiopia, it appears the former political structure is fundamentally reforming. Taking into consideration all these emerging scenarios, along with the signed rapprochement, what are their influence on Eritrea and our region according to your perspective?

In our history, the nation causing the main threat for Eritrea is Ethiopia. We have direct interests Ethiopia. We are not saying we will interfere in the internal affairs of Ethiopia. That is not the point. However, the condition of Ethiopia is directly of concern to us. We forecasted the existing scenario of Ethiopia.

I was invited to participate in the conference of 1992 where the current system of ethnic federalism was considered to be implemented.  The present-day enduring strife among tribes of Ethiopia was imbedded back in that time. It has institutionally evolved for almost 30 years.

We have advised the narrow cliques, forecasting this sort of ethnic polarization. I have had the chance to look at the system of ethnic federalism before anyone was allowed to study it. I have read it twice and I was asked to give my recommendations. For the sake of secession, you should not make the society into an ethnically polarized community. I warned them not to implement such a system.

We haven’t any border problem. We don’t demarcate the borders. We have already inherited the demarcated borders. There were external forces who have encouraged the narrow clique to divide and rule Ethiopia through ethnic federalism. The people of Ethiopia were not part of the war against us. It was the interest of the narrow clique. This narrow ethnic polarization has only one way in the end. That end is devastation.

There are many elites who define this scenario, saying it is the rights of nations, nationalities and peoples. And then these elites deceive the people for their political benefit. As I have said in 1994, how are you going to accommodate the challenges of the current ethnic federalism? It is not possible to continue while you are creating a rift in communities. You cannot even walk through all these narrow positions.

We can look at situations of Iraq, Somalia, Sudan, and others. These nations are living through ethnic polarization. Where are they right now? All are engulfed in civil war. Ethiopia is not different from any nation of the world. That excuse of ‘we are the country of nation nationalities and peoples’ won’t work at all.

We are advising Ethiopians to follow the best path for nation building. This is not because we fear any force coming out from Ethiopia. We can defend ourselves efficiently. I don’t want to suggest this way or that way. The people should select the right way. The people are the last victims. The key problematic force inside Ethiopia presently is the clique of ethnic politics.

Dear President, how do you analyze the role of the people in protecting Eritrea within these three generations and what will be its impacts in the future?

Pertaining to struggle of people of Eritrea, I am always amazed by the firm doggedness of the people although I am part of the struggle for decades. I sometime even ask myself will other people be able to carry such a burden and ultimately triumph.

The forte of our people is to triumph due to its unrelenting struggle. After the Second World War, Eritrea was considered as a main target. To control Eritrea, the powers devised to divide and rule the people of Eritrea. The people have crossed that precarious time and then the civil war, the challenge, has helped our people to figure out the political dynamics. We have learned a lot of experience from our previous challenges.

If we compare with our surroundings, we are all equal people.  But, we should ask why all these burdens and challenges against the people of Eritrea. However, the people have defeated all its challenges. This culture of gallantry should be preserved. This is the grace of our nation.

If you have suggestions to improve the translation, please contact us.