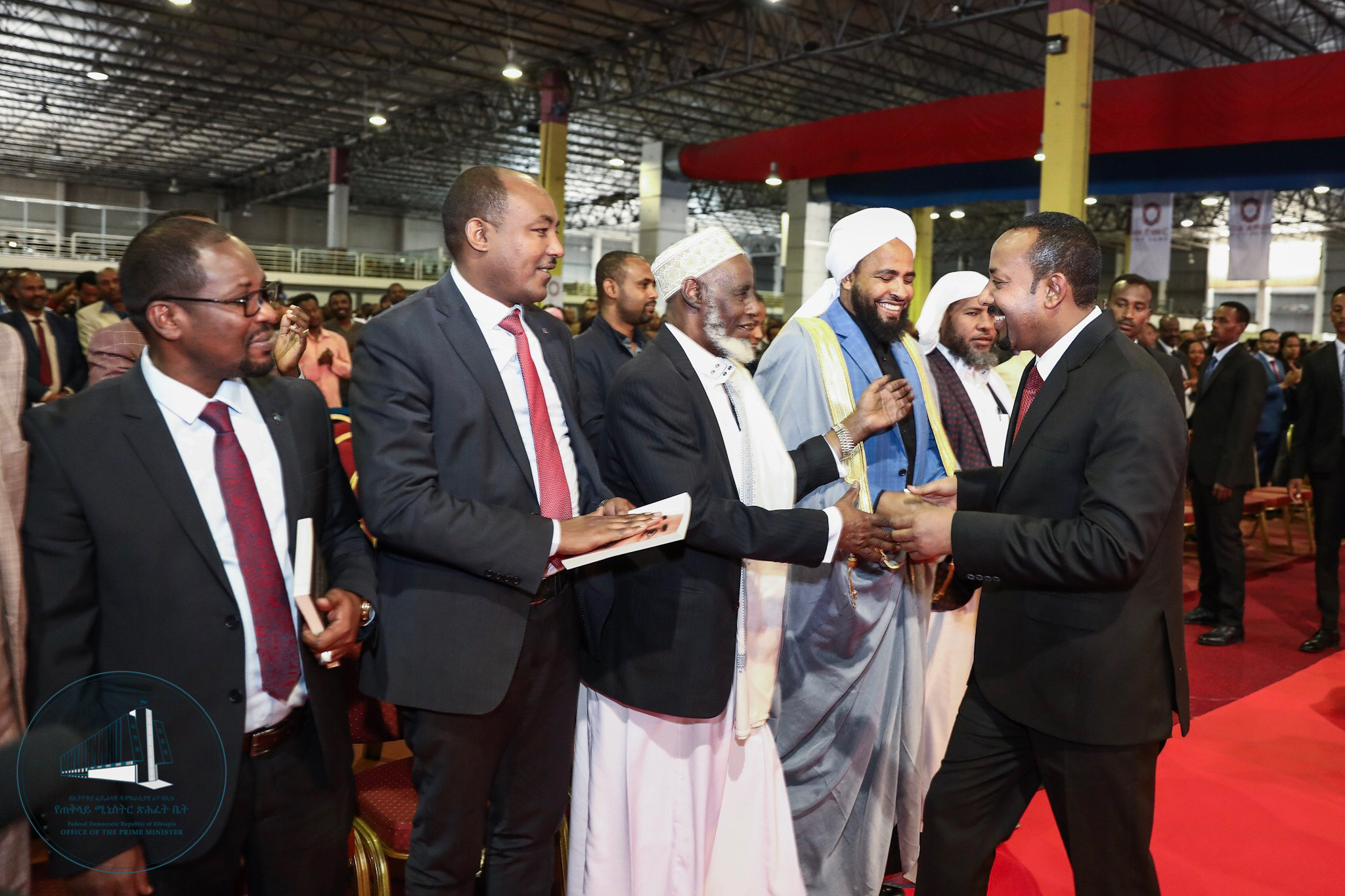 As advised by the Prime Minister, Ethiopians must forge a consensus and forgive the past, and build rather than burn bridges between each other.

Ethiopia’s political climate is volatile. The country is paying a huge price for being a mismanaged multilingual and multicultural nation. Diverse political opinions ranging from extreme nationalism to deep ethnocentrism has led to chaos and the threat of civil war. Ethiopian elites are divided along ethnic lines, religious orientations, and perceptions of history, group identity and political ideology. Tolerance and inclusive politics are not among their virtues.

The current political leaders, however, are trying to mend the broken politics.

Prime Minister of Ethiopia Abiy Ahmed coined the Amharic catchword medemer which means synergy, or to be included, or to be together. He discusses the philosophy in his newly published book, Medemer, which covers a wide range of topics, including Ethiopian politics, economics and our societal fabric. Abiy proposes the philosophy of medemer as a guide to developing a shared understanding on a wide-array of issues such as history, culture, and a way of building a new political dispensation.

The notion is highly relevant at this juncture of Ethiopia’s political development. The concept of medemer has attracted attention in Ethiopia and other African nations. It claims to provide salvation from deepening ethnolinguistic divides and ensuing turbulence. The problem of ‘othering’ has taken on a new dimension from its constitutional base, costing lives and property of citizens. Of course, ‘othering’ is not new phenomenon in Ethiopia; be it in the form of exploitation or suppressing culture and languages. However, currently, ethnic-based eviction is routine and Ethiopia has recently had one of the highest numbers in the world of people internally displaced by conflict. The Medemer approach proposes an end to extremism and hate politics via forging political consensus and reconciliation.

One of the root causes of division in Ethiopia is differing perceptions of history. Our past is full of controversies that have been exacerbated by the advent of socialism in Ethiopia. The struggle against class-based exploitation and questions of national or ethnic liberation came to the fore during the student movement of the 1960s. Since then, and even before, militant groups have been waging a civil war to bring about the equal treatment of different communities in Ethiopia.  After the fall of the military government in 1991, it was claimed that the equality of nationalities was established. In reality, however, that led only to a new phase of reverse discrimination and marginalization against those perceived to have dominated in the past.

Nonetheless, Abiy writes that medemer’s purpose is neither to agonize over the past nor to glorify it. Abiy proposes that Ethiopians should not get stuck in the past, but rather learn from it in order to create a better future. As it is now, political agitators over interpret our real historical injustices and imbalances.

Medemer in the middle

Medemer does not subscribe to any specific ideology, be it socialism, liberalism or social democracy. Yet, it tilts toward the middle ground of social democracy—the liberating dynamism of a market economy balanced by a redistributive and regulatory state—harmonized with indigenous knowledge of Ethiopians and their heritage. Medemer as a political ideology is a politics of compromises. It is about avoiding conservatism, ethnocentrism, and doctrinal rigidity. Medemer abhors conflicts rooted in differences of ideology and wants to shy away from them. Rather, medemer is a political philosophy that cherishes unity with all our differences, as it is rooted in self-understanding and nature.

The philosophy proclaims that everything makes sense when seen in its holistic nature. It contends that a united pluralistic society is a natural force and sustainable. As the saying goes, “united we stand and divided we fall.” Medemer is a concept of unity for diversity. However, to be united does not mean to be one; it is about bringing together our collective forces for collective security, prosperity, cherishing diversity and power. Being greater than the sum of our parts.

Medemer is partly about moral culpability; being responsible and accountable to one’s profession, family, society and country. It abhors hedonism and advocates being considerate, and giving rather than taking. Medemer is about going beyond narrow self-interest and being considerate of collective interests. It pays attention to individual rights without undermining collective rights. It seeks to strike a balance between individual and group rights.

Although, Medemer does not subscribe to any ideology, it does not exclude learning from others’ experiences. It is rooted in homegrown potential, so it pays homage to homegrown social capital such as edir (resource-pooling for funerals), ekub (a community-based saving scheme), inter-religion tolerance, and intercultural tolerance, and tries to build on it rather than belittling anything ‘ours’. It tries to make sense of history and identity, encourages neutrality in foreign relations, and focuses on cooperation instead of confrontation.

The Rule of Law

Medemer purports to work for the rule of law. It means being amenable to the rules and regulations of the country and working for change through peaceful and constructive ways. It preaches the need for the establishment of strong institutions, but also recognizes that institutions alone cannot produce solutions for all social ills. Peace is seen as a societal dividend which results from law and order. Law and order need to be respected by all, especially by those who can ignore it with impunity. In other words, medemer is beyond power and is a question of morality.

Medemer is siding with justice, and working to bring to justice those who damage the societal fabric. Accordingly, justice involves trust, and trust is a main pillar of the state and society. In the absence of trust; no government or society can function effectively. Justice is the blood of society, by which everyone becomes alive and lets the state and its machinery live. Medemer does not believe in exclusion and suppression, rather it is for inclusion and justice.

Medemer is being tolerant of differing voices and views, whether ethnic, religious, political or cultural. Societal strength comes not from being the same but from being different and yet able to forge consensus on basic and important matters of common concern. However, tolerance cannot be stretched to the point that it threatens societal unity and the common identity. Justice is at the core of medemer, and the rule of law is its embodiment.

Medemer acknowledges that there is a huge difference between patriotism and ethnic nationalism. It concedes that Ethiopian nationalism is an unfinished project, yet believes it could be reconciled with patriotism. Medemer aspires to forge alliance between these two concepts via forgiveness and consensus. Medemer must avoid detachment and allow active participation in national affairs. Trouble comes when society is unconcerned and detached from political life. Citizens need to be active, informed, and engaged.

Medemer is a blend of being an Ethiopian nationalist without undermining group identities. It is about loving one’s country and respecting the historical achievements of national heroes and heroines. Paying homage to our past and learning from it is essential in order to take a positive step towards the future. Love for one’s country is essential to a strong and prosperous nation. Nevertheless, historical imbalances and misdeeds need to be acknowledged because our past is neither all rosy nor all bad. The future is envisioned by harmonizing the past and the present for the future.

Medemer takes a strong position on corruption and wants to mobilize public opinion against it; as Ethiopian political culture is dominated by exploitation, domination and marginalization. Hate and marginalization have in the past been features of politics in Ethiopia. On the other hand, medemer is being compassionate, loving and responsible and shying away from anything that is destructive, including corrupting one’s soul and body. It is a life to be lived by the scripture It has its root in nature and spirituality. It is about giving rather than taking; it is about love instead of hatred; it is about sharing and living a life of bounty by sharing; and it is magnanimity that abhors hedonism.

One critical factor on which Prime Minister Abiy Ahmed’s book fails to form a clear stance is the land question, which is not only divisive factor, but also a source of large-scale conflict. The issue of land access needs to be seen in light of the provisions of the constitution. Article 40 (3) of the constitution contains the crux of Ethiopia’s land policy. It reads:

The right to ownership of rural and urban land, as well as of all-natural resources, is exclusively vested in the State and in the peoples of Ethiopia. Land is a common property of the Nations, Nationalities and Peoples of Ethiopia and shall not be subject to sale or to other means of exchange.

The core principle is that access to land is to be decided by ‘Nations, Nationalities and Peoples’ (different categories of identity-based groups) via the land administration power conferred onto them under article 52 of the constitution. Hence, it is no wonder that regional administrators often either deny outsiders access to land or evict those who do not belong to their group as defined under Article 39 of the constitution. Therefore, the core issue with regard to eviction and ethnic division has to do with federalism and the way it is implemented via land access and ownership. The matter has been exacerbated by land administration policy and the importance attached to territory by culture.

Does anyone have land use rights wherever in Ethiopia by virtue of being a citizen alone? Medemer suggests the answer is yes, but in actual practice this may not be the case. In order to make a real difference, medemer doctrine must clearly spell out its stance on land matters.  Thus, Medemer should promote a variety of land tenure systems, including private ownership where it makes economic sense, and in places where the informal land market has become a norm transcending legal prohibitions.

Prime Minister Abiy came to power on the back of a political chaos. His philosophy of medemer is aimed at ending this chaos and forging a national consensus. The question is, will we allow and help him to do so? Will we Ethiopians help ourselves in order for Abiy and his administration to help us? In order for Abiy to help resolve our nation’s problems via the philosophy of medemer, our elites must stop being divisive. Ethiopians must forge a consensus and forgive the past, and build rather than burn bridges between each other.  Building peace and forging national consensus ought to be the guiding principle. Finger pointing at history, politicians, or a political party will not solve the national problem.