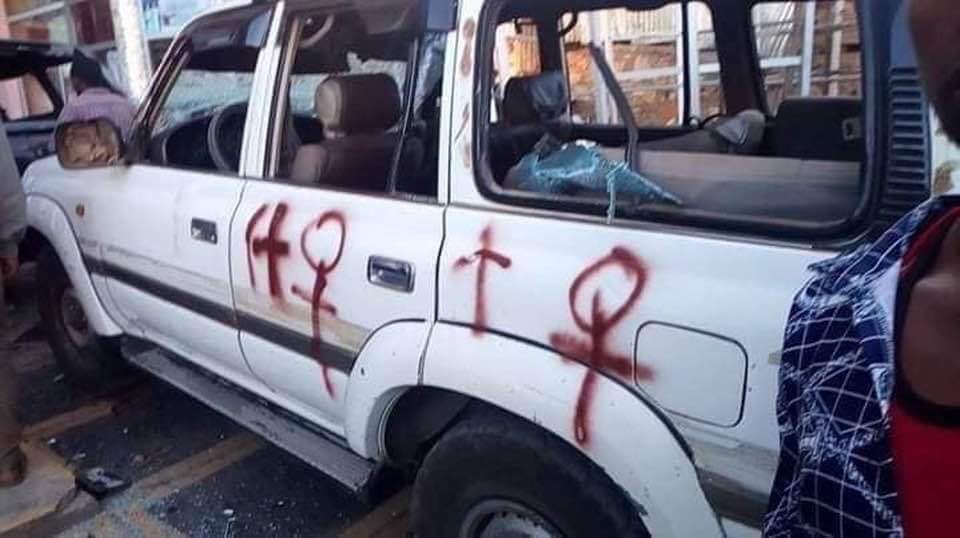 What began in the middle of 2018 as nightly chants of “ciao, ciao Adare” (‘goodbye Harari’), pack your bags, and “kinyyaa” (‘this is ours’) culminated with the Harari National League (HNL) surrendering half of the administration of Harar to the Oromo Democratic Party (ODP). Unchecked, this will end in the complete removal of Hararis from Harar—politically and physically.

Hararis are a unique ethnic minority group in Ethiopia, who have now also become a minority in their indigenous home, the ancient city of Harar. While Hararis used to inhabit a much larger area in the past, they have been relegated to behind the walls of Harar (Jugol) and its environs since after the Jugol was erected in the mid 1500s.

For centuries, Harar was an important city in Ethiopia: Richard Burton called it “the Timbuktu of the East”; UNESCO references it as one of Islam’s holiest cities. During the Italio-Ethiopian war in 1935-36, The New York Times, The Times of India, The Globe, and others wrote much about Harar, some describing it as Ethiopia’s second-largest city.

Today, virtual silence. While there is no war, a serious crisis is taking place. Ethiopia recently gained the unfortunate distinction of having the largest number of people internally displaced by conflict, almost 2.9 million in 2018, surpassing war-torn countries like Syria. As Ethiopia grapples with the challenges of political change and reform, Harar faces its own challenges.

In 2018-19, Harar experienced a litany of abuses: Municipal services such as water and garbage removal were disrupted and cut off for weeks and their return was extorted for great sums of money; ethnically motivated mobs marched the streets of Harar chanting racist and incendiary slogans; historical mosques have been occupied and their religious leaders chased out; several Harari properties and lands have been illegally looted and stolen. And, when the government does respond, they do so at the speed of molasses.

One notable illegal seizure of property and land is that of the Aw Abdal Institute, a school with historical significance to Hararis. Its compound and surrounding area is occupied; the surrounding trees have been illegally uprooted and around 50 houses and shops are in the process of being built unlawfully. Finally fed up, the Aw Abdal board members and the community at large decided to have a meeting at the Amir Abdullahi Conference Centre in September of 2019. Moments before the meeting, local police arrived and forcibly cancelled it without any explanation. To this day, there has been no resolution on the issue.

While Hararis wait for the government of Ethiopia to address their grievances, those borne out of inter-ethnic strife, a new crisis befell Harar in January 2020, one that is religious in nature. It has now been widely reported that, amid the Orthodox Christian Celebration of Timket in Harar, Amhara celebrants and Oromo residents fought over the draping of the former Ethiopian imperial flag—a controversial symbol amongst Ethiopians.

Amhara and Oromo have had numerous clashes over this same flag. This time, however, some used this incident as a rallying cry, claiming Christianity was under attack. Thereafter, a faction of Ethiopian Christians attacked mosques, Muslims, and Muslim properties in the city of Harar and Dire Dawa.

In Harar, local authorities reported, two buildings were set ablaze while another 11 had their windows smashed, two cars were set on fire, and several properties were damaged; several of the properties and buildings belonged to Hararis. The loss of two lives was also reported. One of the lives lost, of the two, was a Harari man, Riad Hassan. After having lunch with his parents, for the last time, Hassan left taking his usual path, unaware of any conflict. Caught up in the confusion, Hassan was shot by police and died three days later.

Last year, to a backdrop of ethnic and communal violence and civil unrest, the ODP forced HNL into an agreement. It was formalized in a swearing-in ceremony in October 2019. In fact, before the agreement was made public, there were several leaks of it on YouTube, some indicating ODP originally sought complete control over Harar, with the supposed caveat that it was only for alternating election cycles. The idea was, Oromos would have 100 percent control over governance, including the president, and in the next election they would cede total control to Hararis until the next election. The lexicon used to describe this new agreement was “fifty, fifty”—meaning “we” (Oromos) get half and “you” (Hararis) get half, suggesting equality.

As detailed in Ethiopia Insight, political power is shared between ODP and HNL in the Harari Regional State, both having won 18 seats each in the last election. The Harari National Regional State Council is a 36-member council composed of two bodies: the Harari National Assembly, a 14-member body reserved  for Hararis; and the Harari People’s Representatives, a 22-member body open to all in the Harari Region. The Assembly nominates the regional president who in turn appoints the cabinet with the approval of the Council.

Both ODP and HNL merged with other ruling parties to form the Prosperity Party in December 2019. The consequences of the merger are yet to be seen in Harar; and since the merger occurred after the ODP/HNL “fifty, fifty” agreement, it has no bearings on that deal. It will be the status quo until the upcoming election. Due to concerns over the peculiar alternating governing idea, ODP, sticking to their messaging of “fifty, fifty”, instead sought 50 percent of the ministerial positions in Harar—for now. In the end, Hararis capitulated to give ODP half of the Harar administration, under the pretence of fairness to Oromo people.

But what about fairness to Somalis in the region, or Gurage, or Afar or any other group? This new arrangement creates more problems than it solves. Since Harar today is quite multi-ethnic —with sizable populations of Amhara, Gurage, Oromo, and Somali—eroding Harari governance over Harar will result in others competing for their share. Damage incurred in Harar during violence in January 2020.

As with nearby Dire Dawa, three large populations of Ethiopia covet Harar: the Oromo, Amhara, and Somali. Historically, each of these groups has gone to war over Harar and in recent times expressed claim over the city. If power shifts to any of these groups, you run the risk of destabilizing the region by the other two groups competing for their share.

Harari people, however, have a unique and legitimate claim. Hararis have actually been exclusively ruling Harar for almost a millennium, minted their own currency, boast dynastic rule of 212 years long, and even once ruled over the kingdom of Adal with its capital in Harar. But the Harari population has faced continuous pressure. It had been further decimated after Menelik II conquered Harar in 1887, annexing it into Ethiopia proper and especially under Tafari Makonnen’s reign.

During the Kulub movement, when Hararis organised peacefully for justice, Makonnen’s deputy governor of Hararge, Blata Ayele Gebre, clamped down on the Hararis most viciously. It was so bad, Tim Carmichael writes, “One local Oromo proverb refers to the event as: “On that day [Hareris] were eliminated from earth.””

The reason Hararis have a quasi-state today is in recognition of Harari culture, language, history, and, perhaps most importantly, to redress the injustices perpetrated against them. Preserving Harari governance will prevent a tyranny of the majority, protect indigenous and minority rights, and, quite simply, is just fair.

To further put things into perspective, the Harari Region is 333.94 km2 while the Oromo region is 284,537.84 km2—over 800 times larger than Harari. Jawar Mohammed, an influential Oromo activist turned politician, aptly said, “Oromos have nothing to lose from Hararis having their own Regional State.”

The Afar have Afar, Amhara have the Amhara Region; the Oromo Oromia, the Somali have Somali Region. What is the alternative for Harari people? Should they merely cease to exist and become fables like their bygone progenitor, the Harla?

The issue of who gets to govern over Harar might be philosophical arguments about true democracy and equitability for some communities. For Hararis, it is an existential matter. The mere continued existence of Harari people and their ability to maintain their identity was described as an interesting phenomenon back in 1975 by anthropologist Sidney R. Waldron. Ethnologue, a global authority on languages, had classified the Harari language as endangered, when Ethnologue used to have that classification.

While the notion of people is difficult to define, Hararis as a people is a foregone conclusion. Sarah Vaughan goes further by saying Hararis qualify as a nation rather than just a people. “Members and outsiders agree that Hararis share distinctive and defined language, culture, territory, history, and economic life: if any group in Ethiopia was to qualify as a ‘nation’, rather than just a ‘nationality’ or ‘people’, it was surely the minuscule population of Harar”, Vaughan writes in Ethnicity and Power in Ethiopia.

As such, in spite of their small population, Hararis have a regional state, albeit a qualified one. Examples of other peoples’ lack of self-determination or a regional state, however, is not reason to deprive Hararis of theirs. Self-determination and cultural rights are human rights. For Hararis, both are under threat as Hararis are being pushed out of Harar politically and physically. As this is occurring, the Ethiopian government appears to have turned its back on Harar, most media outlets do not report on Harar, and non-governmental organizations such as Human Rights Watch, Amnesty International or Survival International are nowhere to be found.

In 2020, Hararis are under serious threat. The question is, who will speak out?

Abdullah is a contributor to Endangered Language Alliance Toronto (ELAT) focusing on the Harari language. He holds a B.A. in Environmental Studies from York University.