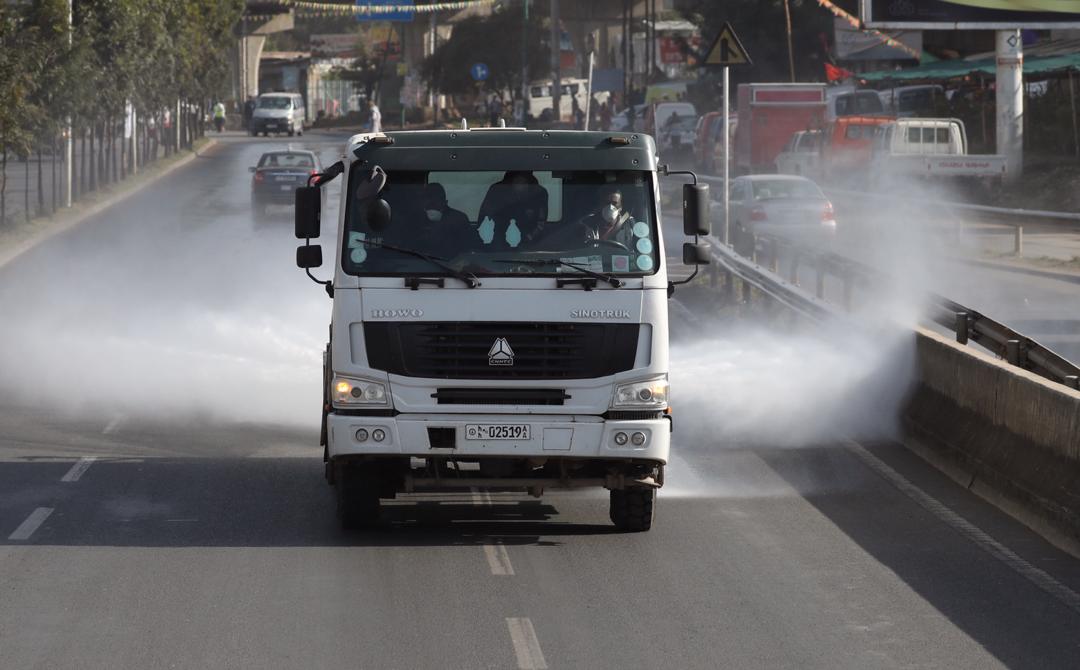 Arguing that developing countries cannot sustain lockdowns to contain infection is a case for more action, not less

As even very limited testing has started detecting the COVID-19 infection spreading domestically in Ethiopia, and recently beyond the boundaries of Addis Ababa, it is vital that Ethiopia learns from other countries’ failures and successes.

Most governments either acted early with aggressive screening, testing, tracing and isolation measures—such as South Korea closing every public building a diagnosed person had been in for two weeks—or found later that they needed to impose economically debilitating lockdowns.

So far, with its minimal measures and testing, Ethiopia is following the latter trajectory towards drastic, months-long lockdowns. Yet that is not a viable option for the majority of the population. Ethiopia has less data, a more limited set of options, and a more acute set of risks, so every plausible approach must be examined and tailored to reduce the severity and scope of lockdowns.

Political factors have been as important as scientific knowledge in tackling the virus. The contagion has outpaced the development of medicines that may alleviate or prevent it. Medical manufacturers were left standing, and health systems incapacitated, as cases grew exponentially. Even strong governments with established health systems, like the U.K., U.S. and China, realized the danger too late.

China muzzled doctors attempting to raise the alarm, smothered Taiwan’s early warning of its unexplained pneumonia cases to the World Health Organization (WHO), and continues to hide statistics and hamper scientific investigation. The U.K. thought normal interaction would build herd immunity for months after the virus had arrived, only changing course after deaths were climbing exponentially.

The U.S. initially downplayed the issue, belatedly realized travel restrictions were necessary, and now has around 13 times as many cases per capita as China has acknowledged. President Trump only realized the scale of the issue when hospitals in his neighbourhood resorted to freezer trucks to carry away corpses, and now considers 100-200,000 deaths a good outcome. Political indulgence during that month or more that it takes for the disease to go from infection to fatality allows the virus to establish infection-generating hotspots throughout a country.

Where governments and economies are weaker, these issues are compounded. The case of Iran demonstrates these dangers.

While similarly religious governments in the Middle East quickly closed external and internal borders and pilgrimage sites, keeping infection rates low, Iran, despite being the first country in the region to record a case of COVID-19, hesitated. It started by covering up, then downplaying, then blaming the virus on U.S. biological warfare, and finally suggested prayer was effective.

When disinformation was no longer tenable, President Hassan Rouhani took the politically easy measures—closing non-essential businesses, schools and universities, and ineffectually trying to ban travel. But despite Qom being the clear epi-center of Iran’s epidemic, with infection rates rocketing, the government backed down when clerics refused to close the city’s pilgrimage sites. Within days the virus had spread to the entire country. The belated closure of the city and its sites was rendered ineffective.

President Rouhani blamed the weak economy and sanctions, which are indeed part of the problem. But he also shoulders the blame, as he politicized the crisis and refused donations on nationalist principle. As politicians were hit with criticism—Iran has a relatively free press, if not opposition—the armed forces capitalized on the government’s weakness, and the Supreme Leader granted them permission to take charge, which led to them arguing for stronger restrictions.

Rouhani, unwilling to look weak, refuses. The WHO estimates that Iran’s infection rate is around five times the 53,000 reported. Officially, 3,300 have died so far, but video and satellite imagery of queues of body bags and mass graves in Qom suggest a cover-up. The government has little credibility, and Iranians continue to defy the limited restrictions.

Ethiopia’s COVID-19 quandary
Uncertainty shrouds the actual spread of the virus so far and the most appropriate method of tackling it in the Ethiopian context.

Iran has a far stronger health system than Ethiopia, but shows the dangers of politicians prioritizing placation over infection control. A precarious leader—whether due to competing factions,  economic stagnation or tenuous popularity—has an incentive to hide the scale of the issue. A smaller case number also makes a threadbare public health system less incriminating. It condones inaction, which reduces the immediate impact on livelihoods and the economy.

Citizens tend to ignore the danger until too late anyway, but especially if fed untrustworthy information that serves a political agenda. Their government then risks humiliation if its desensitised citizens do not follow its demands. Competing centres of power gain leverage to impose their agenda. When the fatalities start climbing weeks later, leaders are reluctant to reverse course for fear of showing weakness. A rational, evidenced response to the crisis becomes impossible.

In Ethiopia, doctors and nurses tackle the virus with only one inadequate and disposable mask. They are therefore afraid of symptomatic patients, and are also an infection risk themselves. Meanwhile, the city throws antiseptic into the gutters and encourages the masses onto the streets for an ill-timed litter pick.

No country can afford such misguided efforts, least of all one with a frail health system, a threadbare social safety net, large numbers with pre-existing conditions (an important predictor of mortality), very few who can work from home or afford to eat without work, and many living in crowded, intergenerational homes, often with no running water. Ethiopia’s only line of defense is halting the spread of the virus by keeping people from physically passing it to each other and between locations.

The argument that poor countries cannot afford the economic consequences of lockdown is an important one. It unfortunately rests on incalculable assumptions that may determine the fate of millions of Ethiopians that have an elevated risk of mortality. It actually argues for the urgent adoption of all infection-containing measures that might minimize or mitigate the nutritional impact on the vulnerable. It illustrates that every single action or inaction comes with a price measured in loved ones’ lives. It is a brutal and final argument against inaction or politicking.

There are a number of measures that Ethiopia can take to help contain the virus. A number of laudable policies are already in place, such as travel restrictions; closing bars, clubs, schools and universities; depopulating prisons; and quarantining international arrivals. But these face little opposition and are akin to President Rouhani’s minimal response as he let infection explode in Qom. As country after country has learned the hard way, a limited response ends with catastrophe. The economic frailty of many in Ethiopia, and the trade-offs that imposes, mean stricter measures are even more urgent.

There are currently only seven confirmed cases of infection outside Addis Ababa. The virus is almost certainly spreading across the country undetected—only some of the people with symptoms are tested, and infected people can remain asymptomatic (yet contagious) for 14 days, and even then appear to have just a mild cold. But, regardless, it is plausible that parts of rural Ethiopia remain virus-free for now. The further from urban areas, the weaker the health system, and the more vulnerable people are to malnutrition. A complete travel ban, except for essential purposes such as transport of goods and aid, should slow the spread while minimizing the economic pain. Some regional states are restricting public transport, but a leaky patchwork that excludes air and private transport lets the virus spread. A total freeze now may prevent the virus reaching whole areas. If the virus is geographically contained, only these locations would need to be locked down later, reducing economic distress and protecting some of the most vulnerable. If we wait until symptoms or fatalities are recorded, the virus will have taken hold everywhere.

Social interaction in infected areas must stop—it is costing lives. In just two weeks, the U.K. went from hoping inaction would work, to arresting a 13-year-old child for breaking lock down. Even visiting family is not permitted. Because we know that imposing more dramatic restrictions later will cause deaths in itself, this is much more urgent in Ethiopia. All inessential trips outside the home should cease immediately, so that the vulnerable can work and feed themselves later. Religious services are no exception. While the Ethiopian Islamic Affairs Supreme Council closed mosques, Orthodox churches continue to hold large congregations that spill onto the streets.

Information campaigns must be rapidly rolled out, and existing sanitation programmes scaled up. These should cover practical topics, such as use of separate plates, how to safely handle injera when the infection may be present, protecting the elderly and vulnerable in infected intergenerational households, nutrition during fasting, and how to safely exercise. Broader awareness also needs improving, such as why going out carefully still risks lives, ways of paying respect without physically attending funerals, and how religious life can continue under lockdown. Scare-mongering doesn’t work if going to church is people’s last resort. Instead, Ethiopians’ sense of responsibility towards their communities and their resilience must be tapped.

Ethiopia needs a State of Emergency to combat COVID-19
A declaration would allow the federal government to quickly mobilize its full power and expedite response efforts.

EthioTelecom must urgently operationalise the recent directive permitting non-financial firms to offer mobile money services. This would reduce infection via bank notes and payment queues and help economic activity continue under restrictions. It would also facilitate the distribution of financial assistance during lockdowns without risking people’s health.

Extensive, repeated testing and thorough contact tracing is too costly for developing countries until affordable tests are mass-produced—but there are cheap technological approaches. The open source TraceTogether app, implemented by Singapore’s government, ensures its tracking data is inaccessible unless someone you have spent over 30 minutes near, or anyone they’ve spent 30 minutes near, and so on, tests positive for the virus. When that happens the data is unlocked and all contacts, including strangers, can be traced and contacted. South Korea is tracking all residents, and sending messages if someone infected enters your town or vicinity. Smartphone ownership is concentrated in the urban areas most vulnerable to contagion and proximity between strangers, and the TraceTogether app is effective and available now, for free.

El Salvador has stopped electricity, water, rent, mortgage, loan, phone and internet bill payments for three months. This may not be affordable here, but smaller similar steps would provide relief and reduce the risk of infection in crowded bank queues. All school textbooks should be made available online. EthioTelecom could make their download free. Paper textbooks must urgently be distributed for those students who cannot access them.

The danger that poor countries with weak polities, fragile economies, and shaky public health systems face, is unknown—no two countries’ experiences are alike, and the important factors are yet to be ascertained. But rich countries, with their rigid lockdowns, strong polities, and comprehensively funded public health systems, are experiencing appalling catastrophes. Developing countries’ additional political and informational, as well as practical, difficulties, suggest they will respond worse and suffer more. The life-and-death economic vulnerability of so many of their population means they are teetering on a knife edge. They cannot afford a misstep.

Chris has degrees in computer science and international development, and works applying technology to development issues. He has lived in Addis Ababa since 2012. Follow him on Twitter @technicaltitch