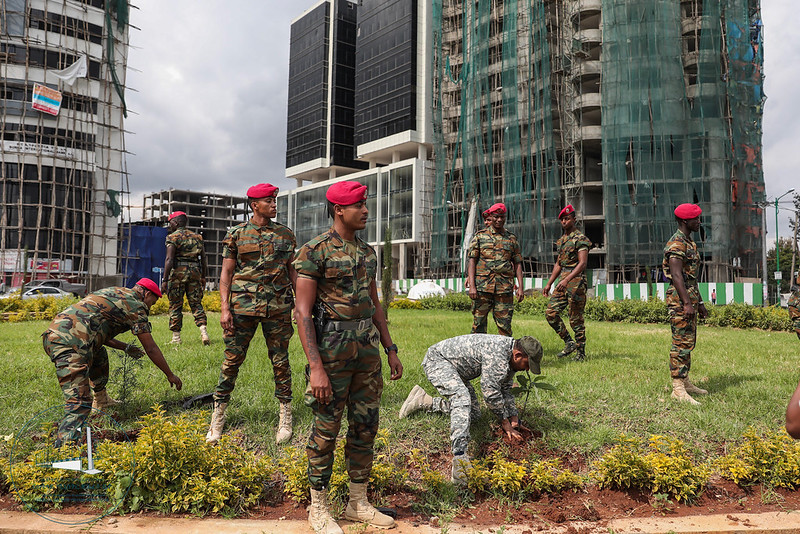 It is the people’s belief in the state’s moral worthiness, not the military might of the regime imposing the royal lie, that sustains loyalty to the country

In the last year or so, declarations of political love for Ethiopia and militaristic assurances of Ethiopia’s everlasting survival have been hitting the country’s air waves.

The politics of love and loyalty is being painted over the politics of ethnic stratification.  Although the declarations and assurances appear superficially innocuous to the naive and unifying for the true believer, they are obnoxious to the informed and disenfranchising for communities.

Declarations of love and loyalty to the state have become the dividing line in Ethiopian politics. Punishment and rewards are meted out depending on which side individuals and/or groups put themselves in or are ascribed to. During the COVID-19 pandemic, the role and impact of the ‘royal lie’ on the attitudes and practices of politicians and institutions and on the fate of the unfortunate cannot be overestimated.

Socrates postulated the necessity of a royal lie—analogizing a country to a biological mother—in state formation and maintenance. Since then, words like Motherland or Fatherland have been used to refer to countries. There seems to be no generally accepted reason why a country is designated as a mother and not a father, or vice versa; cultural and/or political history of the country seem to influence the choice though. Politicians know that a country is not a mother or a father. They know it is a lie. They say it is a noble lie, a lie, nonetheless.

In the past, the royal lie was supposed to be a harmless way to engender the loyalty of people to the state/regime by uniting them under a recounted mythology. It served that purpose well in the 18th and 19th centuries. Today, however, the personification of a country is considered as a fetter on equality, freedom, and democracy. Because knowledge and information are no longer the monopoly of a few, many have begun challenging the myths and dogmas of state formation, as well as the legitimacy of the Leviathan.

Ethiopia is designated as a mother. A portion of the populace, particularly urbanites, unquestionably accept the personification. To love and be loyal to Ethiopia, they have to imagine it as something tangible—their mother. They perceive themselves as children of Ethiopia.

Adherents to Ethiopian matriarchy seem to engage in some creative and deliberate selection and interpretation of views on the origins, history, and fate of the country. They accept the legend of the Queen of Sheba as Ethiopia’s foundational myth. Initially, the Battle of Adwa, recently, the Grand Ethiopian Renaissance Dam, and, lately, the victory at Karamara are also being propagated as the historical facts of Ethiopian nationhood.

Such identification with Ethiopia can be seen both as natural and attractive as well as artificial and sinister. Identification with Ethiopia may be seen as a celebration of belonging to a larger community and a commitment to the welfare of something bigger than oneself. It may also be seen as an irrational attachment to an invented, morally complicated state that is established on, not for, subject people. These are the contested perspectives in Ethiopian politics.

Ethiopia as a country can only continue so long as the peoples in it recognize and identify with it. Obviously, its foundational myths are contested, and the legitimacy of its rulers challenged. With the change of leadership in early 2018, it was hoped that democratic elections would afford a new source of legitimacy. But, the return of the royal lie and the agitation of the common passions that narrow the political space seem to stand in the way

There are at least two major explanations for political leaders’ continued subscription to the personification of Ethiopia as a mother. First, the leaders are manipulated by sycophantic advisors and operatives into accepting the royal lie as true. But naivety and ignorance in politics generally leads to the perilous perception of equating the fate of the leader with that of the country. Second, leaders themselves deliberately employ the royal lie to manipulate national passion to further their self-interest. Their love and commitment to Ethiopia arises not from the country itself, but rather from the benefits they obtain from it: fame, security, and wealth.

Be that as it may, successive regimes failed to instil compassion in the Ethiopia peoples with deleterious results. They rather resorted to palace intrigues, home invasions, street assassinations, village conflicts, and regional wars to remain in power as well as to extract loyalty. Inventions of historical and sociological justifications for the royal lie sowed mistrust among the people, and politicians have been reaping the benefits from the meanness and indifference that ensued. As a result, Ethiopians do not behave as children of the same mother, brothers, and sisters. Ethiopia remains a country—not a mother.

Ethiopia Insight — Oromo nationalism in the era of Prosperity Party
Nagessa Dube: If Oromo nationalists can put aside old fears, they can lead the country from the centre

The will to recognize the aspirations, assuage the pains, and promote the interests of one group by another is still missing. Ethnic passions are wrongly deemed morally inferior. The recognition of the rights of one group is perceived as the loss and disgrace of another. The dispossession and humiliation of one is the pride and achievement of another. Conflict and repression in one region are perceived as the peace and security of another. The instinct to profit from another’s loss and helplessness is tacitly advocated and materially rewarded.

Love, in the political sense, refers to the attitude of care to the health of the country and compassion to the welfare and security of all of its peoples. It could also mean an attitude of appreciation for the food, people, history, dress, music, diversity, weather, and livelihoods. The fountain for political love is neither moral superiority nor ethno-cultural identification. Although temporal and spatial proximity play a role the development of love, a person who has no cultural ties with any of the groups in Ethiopia (for instance, a German) can love Ethiopia, at times even more than an individual who was born in Addis Ababa.

Loyalty to a country, on the other hand, refers to that instrumental commitment to associate and identify with its achievements or aspirations. As such, it can be derived from ancient mythology, its long existence, and material achievements. Or, it can be subscribed to on the basis of a country’s moral order. Where a country’s past is shameful or contested, articulating a new moral height is the way forward.

On a practical level, loyalty involves the recognition of the value of all the people and viewing their freedom as the destiny of a country. It is supporting democratization in the face of dictatorship. It is committing to peace in times of agitation. It is generating hope in times of uncertainty. It is submitting to the will and wishes of the constituents through free and fair election or referendum. It is respecting the people’s sovereignty.

Loyalty to Ethiopia does not necessarily mean identification with the history of the state or strategy of the government. It does also not mean instinctively accepting the homogenization of thought and culture. Advocating for multinational federalism and self-determination are absolutely expressions of loyalty as mechanisms of furthering peoples’ stake in the political arrangement. In addition, loyalty to Ethiopia does not involve seeing the country as the best and all other countries as inferior. For example, the recent xenophobic harassment of expatriates in Ethiopia is a national sin, not an expression of loyalty.

Passion is a fact of political life. Politics without passion is a fiction. Passion infuses structure to political reasoning. It plays an important role in mobilizing the public towards democratic designs. On the other hand, passions can also be manipulated to narrow the space for democratic contestation. When passions become non-negotiable moral positions, they become sources of perennial conflict, as well as create conducive conditions for dictatorship. Today, there are ominous signs of both in Ethiopia.

The most potent danger to the country springs not from passions competing in the political arena, but rather from the attempt to eviscerate certain passions that do not fall in line with the royal lie. For example, the Oromo quest for freedom and democracy has deliberately been misconstrued as a challenge to the state itself. As a result, the government has continued persecuting Oromo nationals—intimidation, threats, imprisonment, torture, kidnapping, disappearance, and death have continued to be common features of Oromo life in Ethiopia. This does not bode well for Ethiopia. If and when the Oromo perceive that the atrocities committed against them are too outrageous to be forgivable, they may lose hope that the state is redeemable. It is the people’s belief in the moral worthiness of the state, not the military might of the regime imposing the royal lie, that generates and sustains love and loyalty to the country.

The COVID-19 epidemic could not have come at a worse time for Ethiopia. Poverty, traditional attitudes to disease and medicine, dismal institutional and logistical preparations, misinformation of doomsday prophets, prisons filled with thousands of Oromo and other political detainees, as well as armed conflicts in parts of Oromia, make the situation ominous. Freeing all political prisoners, including Abdi Regasa of the Oromo Liberation Front, and the journalist Yayesew Shimelis, should be part of the fight against the pandemic.

Ethiopia cannot afford to travel along the same old uncertain path. Ethnic and national identities and the associated passions must be recognized and accorded institutional protection as necessary conditions for a well-functioning multinational democratic society. Commitment to genuine democracy and freedom is a better alternative to express love and engender loyalty to the country than insistence on the timeless royal lie.

Yared is a self-employed Oromo national with degrees in political science, finance, and law. He lives in North America and closely follows events in Oromia and Ethiopia.