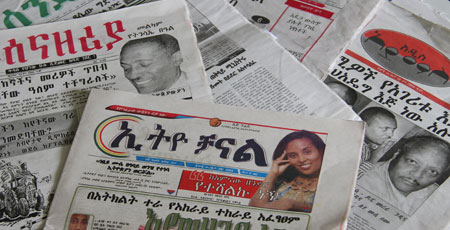 Governments around the world are currently grappling with the economic downturn induced by COVID-19, some quickly rolling out stimulus packages in an effort to cushion the blow to their formal and informal business sectors.

Ethiopia, on its part, has also implemented mitigating measures. Supplementary to its 386.9 billion birr ($13.5 billion) annual budget, on two separate occasions the government approved a total of another 76 billion birr ($2.3 billion) to meet unforeseen public expenditure and compensate for a decline in revenue as a result of COVID-19. Yet, no specific mention was made of bailout provisions for media organizations, many of which are struggling to pay their staff or have shut down altogether since the onslaught of the pandemic.

Since the start of lockdown measures, The Reporter newspaper claims to have lost half of its advertising income; Nahoo TV similarly reported a loss of 80 percent, according to Sirara magazine. JTV Ethiopia, a private television channel operating since 2016, closed in May of this year citing low advertising revenue and inability to pay salaries. Addis Fortune reported that even ETV, the state broadcaster, faced a precarious financial situation and made a plea for government support, indicating many others must also be struggling.

The growing crisis has forced some newspaper outlets—Addis Admass, The Reporter and Fitih among others—to adjust by reducing their printing volumes and circulation numbers, while others—such as Ghion Journal, Sheger Times and Berera—have had to temporarily close.

The issue of sustaining news outlets is not new in the age of ‘digital disruption’, which marks a shift in how news is produced, distributed and consumed since the rise of social media platforms adversely impacted the traditional business models of print media in particular. Unlike distribution systems elsewhere that function on newspaper subscriptions and postal delivery, the newspaper business in Ethiopia still largely relies on a physical handover between seller and reader. Add to this the fact that Ethiopia’s media outlets already took a hit from previous repressive environment and the recent government ban on alcohol advertising, its largest source of income.

In the past, Ethiopian print media have tried integrating digital strategies with mixed results. Though some managed to successfully establish their online presence, many have failed to generate a level of engagement needed to be profitable. This can be partly attributed to the country’s internet penetration rate of less than 20 percent.  So, the media was already struggling to adapt before the pandemic.

Access to reliable, timely information is all the more critical now given that mainstream media have been the main points of reference for Ethiopians on the nature of the virus and what measures limit transmission. As such, ensuring the viability of newspapers, radio and television channels should be prioritized by the government.

The scale of closures and retrenchment that news outlets are currently experiencing highlights the urgent need for context-specific interventions to adapt with the times and build resilience to existential threats, of which COVID-19 is the latest.

To this end, Mulatu Alemayehu, co-founder of a CSO, the Ethiopian National Media Support (ENMS), urged the government to revive its media outlets with the financial life support necessary to continue informing the public on how to fight the spread of COVID-19. He also noted that privately owned outlets should diversify their revenue sources beyond commercial advertising.

In South Africa, for example, the Media Development and Diversity Agency (MDDA) launched an Emergency Relief Fund with the goal of  alleviating some of the COVID-19 related hardships faced by the media sector. To date, it has disbursed R10 million (US$586,194) to over 300 broadcasters and publications across the country.

In view of the economic challenges outlined above, four models of media relief funding should be considered in Ethiopia.

First, the government could finance a media relief fund through the Ethiopian Broadcasting Authority, similar to South Africa’s MDDA and the Zimbabwe Mass Media Trust (ZMMT). Such an initiative would need to operate independently once rolled out, so as not to compromise on editorial freedom and journalistic impartiality. More importantly, a system of checks and balances needs to be in place to make sure media organizations receive financial bailouts on merit.

To make this assessment, the government should create an Independent National Media Relief Fund in the mould of the Media Development and Diversity Agency in South Africa and the Zimbabwe Mass Media Trust. The fund should use a number of variables to assess whether to support the media, including audience, financial situation, and staff numbers.

Second, a donor-coordinated media relief fund could be set up whereby financial assistance frm the likes of the Open Society Foundation is channeled through independent and transparent civil society organizations. Transparency and financial reports would be necessary prerequisites for all grant applications and disbursement mechanisms.

Third, a media resilience fund could be established on the basis of an agreement between digital platforms and local media organizations. Ethiopian media organizations could in turn apply for assistance to this dedicated fund. In Australia, the Competition and Consumer Commission is developing a mandatory code between its media companies and platforms such as Facebook, Google and Twitter which would ensure that advertising revenue generated by those giants is shared more equitably. Separately, Facebook recently announced $390,000 in media grants open to African news organizations and journalists working on informing the public despite the economic impact of COVID-19.

Fourth, an international programme for media support could be underwritten and coordinated by the United Nations Educational, Scientific and Cultural Organization (UNESCO). Through its national office here in Addis Ababa, UNESCO would receive applications for media assistance and have them considered by an expert committee, including representatives from Ethiopia’s media houses and the Ethiopian Broadcast Authority.

Beyond these options, the government should prohibit advertisements in publicly funded media outlets, in keeping with others such as the BBC, to free up a larger share of advertising revenue for private media. The current situation means publicly owned stations such as ETV air commercials while private broadcasters, who are playing a critical role in the country’s democratic transition,  are struggling to stay afloat.

It should be noted that there are shortcomings in the above proposals for reviving Ethiopia’s media sector. For instance, the adoption of a media relief fund administered through Ethiopian Broadcast Authority may be resisted by news organizations for fear of media capture, editorial interference and structural censorship of media content. Reliance on donor funding has also been criticized for creating dependency. The benefit of an advertising code with digital platforms is significantly limited by the generally poor online presence and content production of Ethiopian media. It is also likely that the government will be reluctant to promulgate legislation that bans advertising on its own media houses.

To underscore, there are no one-size-fit-all solutions for the current challenges facing Ethiopia’s media during this unprecedented crisis and beyond. The precarious state of media organizations needs to be urgently addressed, however, before it is too late.