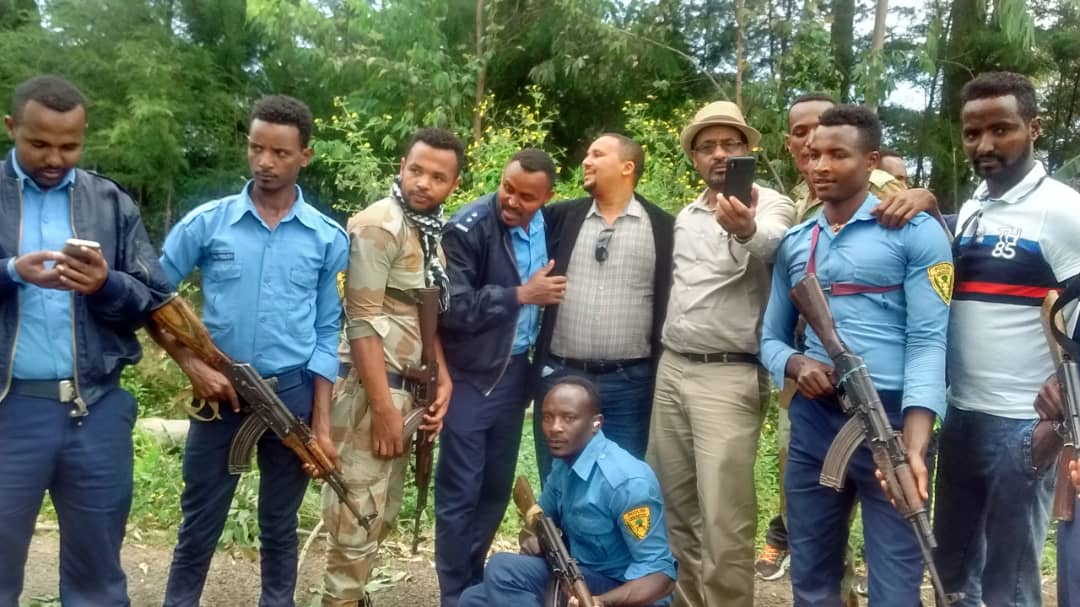 On 16 July, two leading figures from the opposition Oromo Federalist Congress, Jawar Mohammed and Bekele Gerba, stood before the Federal First Instance Court, Arada Branch. For Jawar, the influential activist and founder of Oromia Media Network, it was the second court appearance, and for Bekele, previously jailed under the former ruling coalition, it was the third since they were arrested on 30 June along with 33 others. So far, only four state-owned or party-affiliated media outlets have been allowed in the court room.

According to defence lawyers, the 35 are suspected of four crimes: initiating ethnic conflict; killing and wounding members of Oromia Special Forces; forcefully taking and mishandling the body of Hachalu Hundessa; and attempting to assassinate officials from Oromia. As of 16 July, there were 10 case files for all 35 suspects. So far, there have only been hearings for four case files for 16 suspects. The police have asked for another 14 days to conduct further investigations and apprehend other suspects. The court granted police 12 more days for Jawar’s case and 10 for Bekele’s. Accordingly, the cases were adjourned to 29 and 27 July, respectively.

During the 16 July session, prosecutors from the Federal Office of the Attorney General presented the overall direction of the investigation, according to reports. Prosecutors stated they have formed 14 teams to investigate property damage, injuries and fatalities that took place during the unrest that followed the 29 June assassination of Oromo singer Hachalu on the outskirts of Addis Ababa.

Although the prosecution didn’t present evidence that the investigation has uncovered so far, they elaborated on the nature of it, and submitted a written statement. Prosecutors stated that Jawar instigated clashes and conflicts based on ethnic and religion differences via social and broadcast media, and said they have witness testimony from 34 individuals about his conduct.

Media reports other testimonies will show Jawar and his close followers had forcefully taken Hachalu’s body at Burayu check point, opening fire on security forces that were present. After taking the body, Jawar’s group brought it back to Addis Ababa to the headquarters of Oromia branch of Prosperity Party, demanding that Menelik II statue near Piazza should be taken down and Hachalu be buried there instead.

The Federal Police Deputy Commissioner Zelalem Mengiste told pro-government Fana Broadcasting Corporation (FBC) on 1 July that there were plans being coordinated through the media to dismantle Menelik II statue in Addis Ababa and bury Hachalu there. He said the use of media for this purpose was being investigated by the Ethiopian Broadcasting Authority.

Federal Police Commissioner Endeshaw Tassew told FBC and Ethiopian News Agency on the evening of 30 June that a confrontation at Oromo Cultural Center near Meskel Square happened between government security forces and a group led by Jawar over the burial, leading to the killing of a member of Oromia Special Force. He accused Jawar’s security detail of the killing.

While Jawar and the individuals arrested alongside him attempted to enter the headquarter of the party, one Oromia Regional Police Special Force was allegedly shot and killed, while three others were wounded by Jawar’s armed group. The prosecution stated it has gathered 10 witness testimonies and forensic test results which show the group was responsible.

In addition, 10 Kalashnikovs, one semi-automatic rifle, 10 handguns and nine communication radios were found in the hands of Jawar’s group. The appropriate authority has proven that these firearms and radios were illegally possessed, said the prosecution.

In defense of Jawar, a brilliant and dedicated agent of change
By Ezekiel Gebissa

Regarding the campaign of violence through social and regular media Jawar is suspected of, the prosecution has acquired the contents of Oromia Media Network’s (OMN) output from the Broadcasting Authority. Following OMN transmissions, 14 people were killed in Addis Ababa while 167 more deaths occurred in Oromia. The extent of property damage in Oromia is still being calculated, however 200 million birr worth of damage took place in Addis Ababa, according to prosecutors.

The team is yet to conduct further investigation of a satellite receiver and other electronic items found in Jawar’s house, find out the relationship the suspect had with OMN and other groups creating disturbance, or make further arrests of other suspects. It’s also waiting on evidence from 14 investigative teams. Thus, the Federal Police requested another 14 days, although the court granted only 12.

Defense lawyer Tokuma Tefa also made arguments and complaints during the hearing. He said while Jawar and Bekele’s were being reviewed under separate case files, they are suspected of committing more or less the same crimes, and so should be prosecuted together. Both deny committing any crime. The defense stated that the police doesn’t have enough evidence to arrest them at this point and their clients should therefore be released from custody.

Tokuma also refuted prosecution statements, saying that their clients did not cause a police officer to be killed, or preach and incite violence through social media and television, nor did they give any order to that effect. Rather, a police officer was fatally shot after they had left the premise of Oromo Prosperity Party’s headquarter, and they had nothing to do with this. Tokuma argued that the police have not sufficiently demonstrated that Jawar and Bekele campaigned for violence or explained exactly how they did so.

Regarding the alleged possession of illegal firearms, another defense lawyer, Kedir Bullo, told Ethiopia Insight in a phone interview that the firearms that were found in the hands of Jawar’s personal security details were registered.

In addition to the arguments presented by the defense, Jawar spoke to the court, according to Ethiopian state-owned radio. He stated that no police officer or individual was shot during the time he was present and that Hachalu’s body was brought from Burayu to Addis Ababa because the road to Ambo was blocked. He added that the issue is political and should be solved through dialogue.

On 16 July, the defense team also spoke about the custody conditions of their clients. Kedir stated that they are being held underground in a building owned by the Federal Police located around Mexico Square. There are issues with accessing food brought by visitors and the visiting rights of family members and lawyers is not being respected. According to the media, the prosecution replied that visiting rights were limited as per the state of emergency declared to control the spread of COVID-19, and also that the suspects aren’t being held for their political role; rather the police have a reason to believe that they committed crimes. After hearing both sides, the court ordered the police to improve the custody conditions of the suspects and that the state of emergency is applied in a reasonable manner.

Furthermore, the defense team also stated that their clients are being defamed by state media, whose reports have spread the assumption of their guilt among the public. Lawyers asked the court to order this to cease. The court rejected the request, stating that the complaint isn’t clear and convincing. Kedir told Ethiopia Insight that the pre-trial reports undermine the presumption of innocence. Kedir believes part of the reason the pro-government media is doing this is to undermine the public support their clients have.

Bekele appeared in court on 16 July after his hearing on 13 July was adjourned without the court giving ruling on the police request for an additional 14 days’ investigation time. The court granted another 10 days. According to state media, Bekele was arrested the day after Hachalu’s death along with his two sons and other suspects. Kedir said Bekele’s sons are suspected of committing many of the same crimes as their father.

At the 13 July hearing, the prosecution said Bekele incited violence by calling upon youth groups to escalate the damage and chaos when he was about to be taken into police custody. According to an Ethiopian News Agency 14 July report, this resulted in the death of hundreds of individuals and the destruction of property worth millions of birr. In addition, two pistols were found inside the suspect’s residence, which were sent to a forensic team for analysis.

From his pulpit, amid a crisis, Abiy regally dismisses all opponents
By Rene Lefort

Tokuma told Ethiopia Insight that the Federal Police Deputy Commissioner Zelalem Mengiste told the media that Jawar’s security detail attempted to enter Oromo Cultural Center – which is adjacent to the Prosperity Party office – while armed when high officials were holding a meeting in the compound. He accused Jawar and Bekele of attempting to repeat the 22 June 2019 multiple assassinations in Bahir Dar and Addis Ababa. According to Tokuma, there is no basis for this, and Bekele would not have brought his sons and daughter if he was planning an armed insurrection. Also, he wouldn’t have left his pistol at home.

A Federal Supreme Court official told Ethiopia Insight that the four media had been selected in advance by the authorities and that there was no facility for other outlets to apply for permission to report. No formal explanation was given by the official as to why private media were not allowed access. Ethiopia Insight spoke to Tesfaye Neway, the Vice President of Federal First Instance Court, who said that the coronavirus is the main reason for the restricted access. Because of the interest in these cases, many journalists want to attend but the courts cannot accommodate a large number and ensure social distancing. Tesfaye said the court didn’t select the four media on the basis of who owns them and that additional outlets may get access.

Currently, the government thinks that the newfound freedom of the press has been exploited by some to promote ethnic conflict. On 12 July, Fekadu Betsega, the Director of the Border Crossing and Organized Crime Prosecution Team, told FBC that the night Hachalu was murdered, OMN was already inciting ethnic conflict.