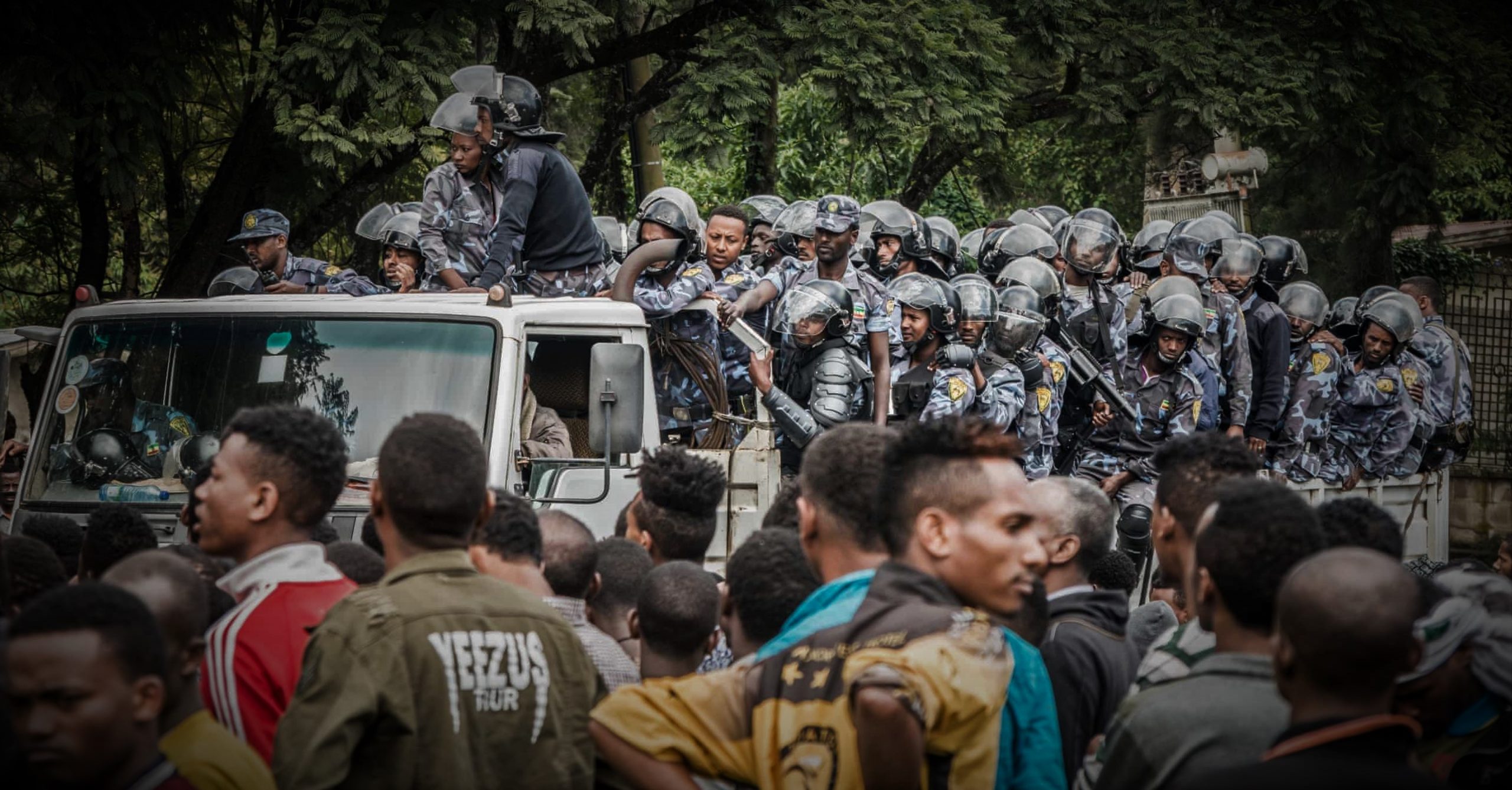 To change the policing culture in Ethiopia, the focus needs to be on systemic failings, not just individual accountability

It was only a year ago that a video showing two police officers assaulting a handcuffed man and an elderly woman was widely shared among the public. For most of us that saw the altercation, the police’s brazen and disproportionate use of force was not only a wrong that needed to be investigated—it was also yet another example of the type of police brutality we see on an almost daily basis.

Whether it is intimidation, harassment or physical abuse of ordinary members of the public, we have seen such acts being routinely used by both the Addis Ababa and Federal Police forces. In this context, the speed and intensity in which this video was shared and discussed among the public garnered the attention of the Addis Ababa Police Commission, which vowed to not only investigate the incident but to also make the findings of such an investigation public.

However, this denunciation also came with a caveat that attempted to explain away the incident as the misguided actions of newly recruited police officers. It is this contrast between understanding police brutality as either an individual’s fault or a systemic issue that this article wishes to explore. A year after this incident and with no public investigations in sight, this article seeks to provide an assessment of how Ethiopia’s legal system conceptualizes and penalizes the type of police brutality we see on a daily basis.

As one of the most powerful civil institutions in the country, the Federal Police Commission plays an important role in protecting the rights of civilians and maintaining their peaceful way of life. Whether it is through its investigative, disciplinary, or other enforcement powers, the police are not only the most visible extension of the state but also have a unique set of responsibilities that directly affects each citizen and their quality of life. However, in exercising these important functions, the police are obligated to not only enforce the laws of the country but to also adhere to them. Whether one looks at the Federal Police Commission Proclamations of 2000, 2003 or 2011, an officer’s duty to serve and protect has always been explicitly and intrinsically linked with their obligation to respect the country’s constitution, Criminal Code, and other relevant laws.

This dual obligation to respect and enforce the law is further reinforced by the Federal Police Officers Administration Regulation of 2012, which not only requires police officers to respect international human rights instruments but also assigns personal liability to each officer that violates this legal obligation. Furthermore, by placing strict restrictions on an officer’s use of force as well as classifying any acts of intimidation, human rights violations or sexual harassment as grave disciplinary offences that warrant dismissal, this regulation goes a long way in safeguarding the public from police misconduct and brutality.

Similarly, the Ethiopian Criminal Code does not shy away from labelling police misconduct as severe breaches of public trust that warrant criminal liability. In fact, given the sentences put in place for the crimes of abusing one’s power, the dereliction of duty or the use of improper methods, it is safe to say that the Criminal Code unequivocally punishes those police officers who disregard legal safeguards in order to threaten, intimidate, or brutalize their fellow citizens.

Regrettably, these legal safeguards have achieved very little in tackling the culture of police misconduct and brutality in both the Federal and the Addis Ababa police. Whether it is the excessive reliance on corporal punishment, the misuse and mishandling of government-issued weapons, the verbal harassment of civilians, or the physical intimidation of members of the public, the frequency in which we are witnesses to these illegal acts speaks to an entrenched culture of impunity that, for the most part, has been overlooked. As such, it is important to assess the efficacy of those oversight mechanisms that seek to investigate and penalize the type of police brutality we see on a daily basis.

By transitioning from a single institution with a largely broad mandate to multiple disciplinary committees that exclusively investigate a particular type of police misconduct, this evolution of the police’s oversight mechanism is indicative of one thing. Namely, that the government is very much aware of the frequency with which serious police misconduct occurs and has subsequently tried to reform their institutions in order to address this issue. Given the availability of these disciplinary committees in every sector of the police force, their exclusive focus on serious police misconduct as well as their ability to dismiss an officer irrespective of any outstanding court proceedings, it is safe to say that the Federal Police Officers Disciplinary Committees aspire to provide some redress to victims of police intimidation, harassment, and abuse of power.

Unfortunately, despite such reforms, these discipline committees have done very little to hamper the type of police misconduct we routinely see. Whether one looks at the excessive use of force by police officers, their verbal and physical harassment of civilians, or the public’s unawareness of this oversight body, it is quite clear that these disciplinary committees have failed to change the culture of impunity in both the Federal and Addis Ababa police.

In fact, if one were to look at Article 52 of the Federal Police Officers Administration Regulation, it quickly becomes apparent that these committees are only mandated to investigate individual instances of police misconduct in order to either rehabilitate or dismiss those officers that are abusing their authority.

It is the opinion of this author that such a myopic and individualistic understanding of police accountability has directly contributed to the failure of these oversight mechanisms in providing the public what it so desperately needs. That is, an impartial institution that not only compensates victims of police brutality but one that also proposes policies and guidelines that can reduce the likelihood of similar violations occurring in the future. Given that these principles of restitution, compensation, and guarantees of non-repetition are essential for providing an effective remedy to victims of police brutality, the limited and punitive mandate of the Federal Police Officers Disciplinary Committees falls short of the government’s national and international obligations.

Whether one looks at the African Union’s Luanda and Robben Island Guidelines or the United Nations’ Declaration on Justice for Victims of Abuse of Power and their Basic Principles on the Use of Force & Firearms, each of these instruments obligate the Ethiopian government to establish a disciplinary committee that can investigate and tackle police misconduct at both the individual and systemic level. Instead, by purporting to only hold rogue police officers accountable, we have been left with an oversight mechanism that, at least on paper, prioritizes individual accountability over systemic reform.

In conclusion, given the robust legal safeguards that seek to protect the public from police misconduct and brutality, it is safe to say that the prevalence of these illegal acts is largely attributable to ineffectual oversight mechanisms that, for the last 20 years, have turned a blind eye to the root causes of what we see on a daily basis.  Whether it is the excessive reliance on corporal punishments, the misuse and mishandling of government issued weapons, the verbal harassment of civilians or the physical intimidation of members of the public, the inability to eradicate this culture of abuse has resulted in these illegal acts being synonymous with our police forces.

As such, even if the current oversight mechanism has other structural issues that need to be re-evaluated—the composition of the committees, the lack of procedural transparency or its non-existent public engagement strategy—the success of any effort to reform these issues would be severely curtailed if we were to overlook this institution’s narrow mandate.

As evidenced by last year’s infamous video, aspiring to only hold individual officers accountable does little to change the culture of policing in Ethiopia.

Ayele is a graduate of Stockholm University and Oxford Brookes University's School of Law. With a background in political science and law, his experience and belief in evidence-based interventions fuels his interest in Ethiopian policy issues.