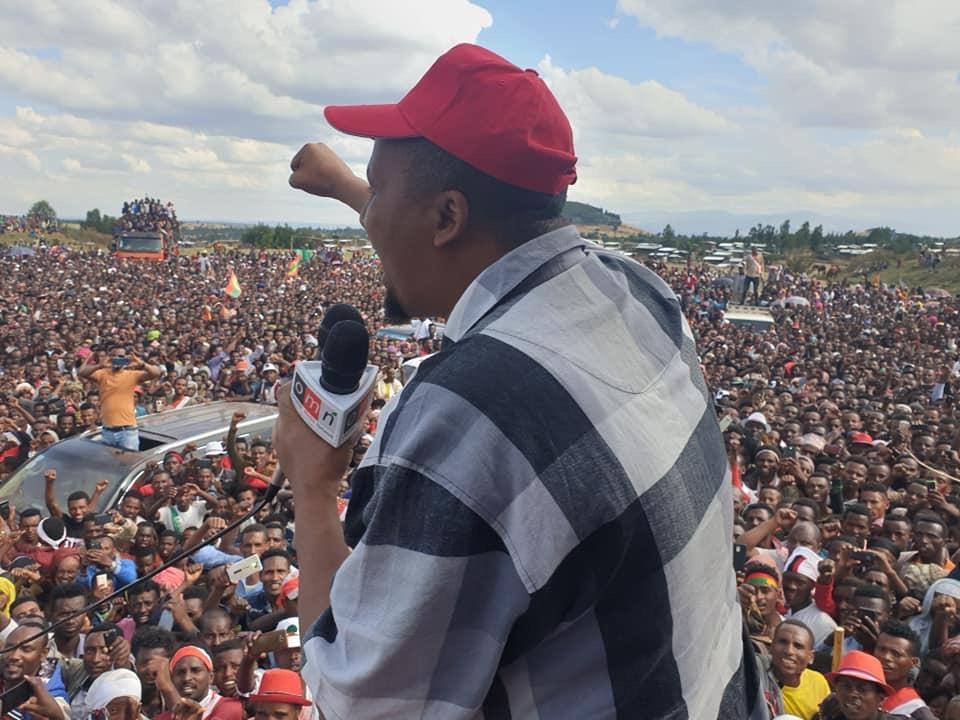 After a defense claim that a judge was biased was rejected by judicial authorities, the court granted prosecutors a preliminary inquiry

Oromo Federalist Congress leaders, Bekele Gerba and Jawar Mohammed, and 12 other suspects asked the First Instance Court on 10 August for replacement of a judge, but the request was denied. Following the ruling, a preliminary inquiry was set to begin on 13 August. It did not go ahead as five of the suspects were absent due to medical problems. The court adjourned until 17 August.

The suspects submitted a 7-page document explaining the request to replace the judge. According to defense attorney Tuli Bayessa, they doubt the judge’s impartiality. The judicial registration office rejected the request, saying there was insufficient evidence. Part of the defense case was that at one point the judge denied Bekele the chance to speak, claiming that it was against protocol and he had ample opportunity to speak through his attorneys. Also, overall, the defense team felt the judges were rejecting all of their challenges.

The prosecution team includes Fekadu Betsega, Director of Border Crossing Crimes Prosecution, and special prosecutor Ephrem Hailu. At the 4 August hearing for Bekele, the prosecutors told the court that they had opened a preliminary inquiry file to verify and register witness testimonies. He asked the court to close the pre-trial hearing files and proceed with the inquiry. The defense objected but the court accepted the request.

A preliminary inquiry is a hearing before trial that is standard procedure if the crime is homicide in the first degree or aggravated robbery. However, the High Court can dispense with a preliminary inquiry if it is satisfied with the arguments by the public prosecutor that the trial can be held immediately.

The other case where it is held is if a prosecutor after receiving the police investigation decides a preliminary inquiry is necessary. In the inquiry, only witnesses of the prosecution are heard, although the court can call witnesses other that those presented by the prosecution if it deems it necessary to clarify the accusation. The testimonies are recorded and presented at the subsequent trial. A preliminary inquiry doesn’t constitute a trial and nothing will be decided.

Transition on trial
By Lule Estifanos

“The police had more than enough time and that the investigation did not present any satisfactory evidence, and the prosecution only requested a preliminary inquiry to buy time.” Defense lawyer Kedir Bullo told Ethiopia Insight. “The investigation should have brought their request earlier, and their client is being incarcerated without judicial judgment.”

As the police have concluded their investigation, the defense asked the court to release their client on bail but that was rejected. The prosecutors stated that the court was correct not to allow bail since the crimes that the suspect will be charged with are punishable with 15 years and above imprisonment.

On 6 August, prosecution asked the court that five of its 15 witnesses be allowed to conceal their identities. Tuli said “the court should have heard the defense’s argument but instead allowed it at the same session without investigation.” Despite all 15 witnesses attending, the 10 August hearing did not happen following the request for a replacement judge. Prosecutors in Eskinder Nega’s case also asked for the identity of seven witnesses to be concealed and it was accepted by the court.

Democracy in action amid authoritarian reaction
By Yared Tsegaye

Tuli said that “the defense asked for the names of the witnesses and which crimes the testimonies will be about” but the prosecution said that there is no legal obligation to provide the information. “Any accused person has the right to be informed of charges against them. However, the judge stated they have no right under the law to demand the information at this stage of the pre-trial,” Tuli said.

The defense also argued that, as per the criminal procedure code, the Arada First Instance Court has no jurisdiction to reside over the preliminary inquiry as that is not where the crime was committed. The prosecution’s case states the crime occurred from St. Paul’s Hospital to Burayu and then back to around Stadium – not in Arada Sub-City.

The defense attorney said they raised the issue of media access and were surprised at being told by the judge that is not part of their remit and that they were not sure if other outlets had been rejected. Additionally, even if the outlets covering the case are state-owned, their coverage would be impartial, the judge opined.

In a statement today, Human Right Watch criticized the government’s handling of some of the suspects arrested after political violence last month. “The authorities should only bring charges for recognizable crimes and where there is sufficient evidence to proceed to trial. Those detained should be informed of the specific grounds for their arrest, be able to fairly contest their detention before an independent and impartial judge, be permitted access to a lawyer and family members, and have their case periodically reviewed,” it said.

Before the 10 August session, Bekele had two pre-trial hearings. On 4 August, the Federal Police investigation team listed additional evidence it had gathered in the previous eight days. According to The Reporter, prosecutors stated to the court that the accused will be charged for instigating ethnic war and other crimes. Investigators stated that they had received a 45-page document from the Ministry of Transport which shows 7.4 million birr worth of government property and 28 million birr worth of private property were destroyed.

It also collected a document which shows the serial numbers of two handguns belonging to the suspect and seven handguns belonging to his followers replaced with serial numbers which weren’t provided by the manufacturer. The investigation said it has documentary evidence which shows Bekele instigated ethnic and religious-based violence stating: “The fight (struggle) will continue till the government in power falls” in a phone call made to someone in Shashemene on 30 June.

In the violence that resulted from the phone call, 32 people were killed, while 110 hotels, 239 private and government houses, 393 private residences, 56 shops, 14 factories, 80 private and 2 government-owned vehicles, 63 private institutions, 1 religion institutions and 26 other privately owned buildings were destroyed. Additionally, 4 government and private banks and 148 business institutions were robbed. A total of 1,128 households were displaced.

The investigation said it has gathered testimony of 27 witnesses which shows the suspects were planning to hold the artist’s body for 10 days without burial. They asserted that there was a plan to organize youth groups to dismantle the statute of Emperor Menelik II in Piazza in order to hold a burial at the location, and that they planned to conduct a coup at Arat Kilo.