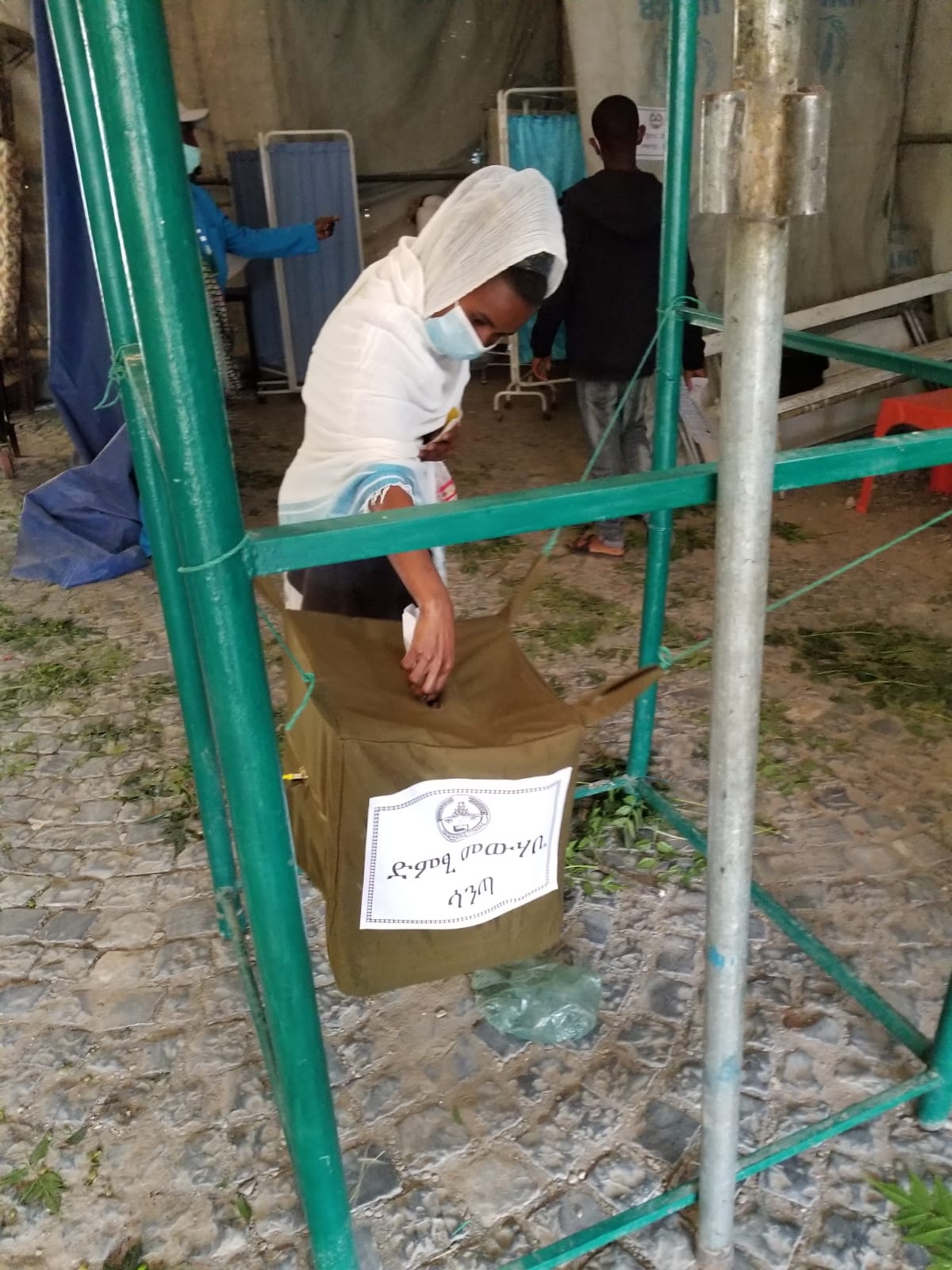 Tigray’s election shows not just the possibility of holding polls during the pandemic, but also the possible emergence of political pluralism.

Tigrayans are voting today in a historic first autonomous regional election. The poll will offer voters the choice of five alternatives to represent them at the State Council.

The federal government had no constitutional basis to extend the general election nor has the power to prevent regional governments from conducting their own elections.

In rejecting this decision, Tigray regional state and its ruling party, the Tigray People’s Liberation Front, decided to proceed with regional elections on schedule, despite warnings from Addis Ababa.

Several fundamental issues led to the current confrontation: lack of trust in the new leadership, Abiy’s leadership, lack of clear transitional framework, ideological disputes, and the unifying of the ruling coalition into a single party. However, alienation from political power, exclusion of the TPLF from major decisions and the issue of postponing the national elections exacerbated the confrontation between Prosperity Party and TPLF.

In Tigray, this discontent, confrontation, exclusion and sabotage were a signal for many Tigrayans to look inwards and focus on Tigray’s own national interests. The local election is seen by some as more than choosing parties to form a government. Rather, it is tied with the sacrifices paid for the principle of self-determination in the 17 years armed struggle against the Derg regime.

The TPLF is also showing some modest commitment to transform the political landscape in Tigray, while opposition parties are playing complementary roles. This has been manifested in mutual consensus, in which any attempt to sabotage or undermine the election and acts threatening Tigray are agreed to be unconstitutional and unjustifiable. The election is a first for Tigray in terms of substance and process. As a process, the willingness of the Tigray government to negotiate with opposition parties on issues such as ratifying new electoral systems or procedures and a new code of ethics are very promising. Equally, the outcomes of this bargaining process have been encouraging. Sources have described  the way the election commission is chosen, the introduction of a mixed electoral system, and the fair division of financial and media resources among parties are groundbreaking.

In the upcoming election, opposition parties are expected to secure maybe a tenth of the 152 seats in the regional council, so the election has the potential to lead to a competitive multiparty system in the next election.

This progress in democratization in Tigray is remarkable considering the region’s poor democratic record, including deeply flawed elections, and single-party politics. In addition to expanding political space, there are also commendable efforts towards building democratic institutions.

Four opposition parties and the ruling TPLF are registered to participate. All parties have been campaigning, and are trying to reach voters through radio, television, social media, and print advertisements—a commendable effort considering most of parties were only recently organized.

Voters have several policy options to choose from, ranging from the TPLF’s long-established model of economic development, to National Congress of Great Tigray, or Baytona’s modified developmental model to Salsay Weyane’s and Adepa’s social democracy.

Baytona wants to implement the TPLF’s developmental state imbued with Baytoawi community-based, grass-roots democracy. Baytona Party leaders do not fundamentally differ from TPLF’s economic policy, but rather on its implementation. They vehemently criticize the implementation of the current development model in Tigray, including a top-down approach and democratic centralism, which they claim provides no room for autonomous decisions by lower administrators, nor public participation in policy formation. Tigrayan voters head to the polls on 9 September; submitted

Salsay Weyane says Tigray’s lag in development and abject poverty can be attributed not only to TPLF’s poor leadership and bad governance, but to a lack of sound, contextually sensitive policies and strategies as well. They contend TPLF’s universalist ideological orientation lacks policies specifically designed to transform Tigray. Efforts to eradicate poverty, ensure fair distribution of resources, and achieve social justice are therefore still inadequate and far below popular expectations.

Salsay Weyane and the respective opposition parties agree  that Tigray is rich in potential, and boasts tourist sites, abundant natural resources, arable land, mineral deposits, and a strong labor force. All that remains is a formalization of policies that will better utilize these means of production and uplift Tigray through social democracy.

Asimba Democratic Party, or Adepa, also argues suffering in Tigray is due to lack of contextually sensitive policies and strategies, as well as a lack of good governance. It further contends TPLF-linked enterprises such as EFFORT’s stifle private sector development and plans to privatize its companies and state-owned enterprises.

Tigray Independence Party, or NATSNET, contends Ethiopia’s long-established historical cleavages and contradictions are irreconcilable. For them, Ethiopia is an empire-state created through the conquest and subjugation of distinct Ethiopian communities and assimilationist policies, and that Ethiopia itself is the main barrier to the realization of the Tigray cause. They argue Tigray can no longer achieve its developmental endeavors within Ethiopia and refute the long-held TPLF view that it can.

Unlike TPLF, Salsay Weyane and Baytona see the problems as deep-rooted structural ones that are not easily solved.TPLF believes Ethiopia is walking away from rapid economic development, becoming a hegemonic regional power, and allowing greater regional autonomy, and heading deeper into a political crisis that threatens state collapse. However, they reduce this crisis to leadership and governance problems, and as a condition that can be reversed in favor of Ethiopian nations, nationalities and peoples through ensuring unity in diversity.

However, the ability to renegotiate the constitution remains open. Salsay Weyane seeks a new contract on constitution and the federal structure. This would grant regional states more powers through devolution and grant minorities a veto power guaranteeing safety from majoritarian tyranny in the federal houses in what they call “New Deal, New Chapter”. Alternatively, Baytona wants a confederal arrangement, far beyond a loose federation.

Unlike TPLF, Salsay Weyane, Baytona, and Adepa, TIP all explain Ethiopia’s problem as long-established and that the historical cleavages and contradictions are irreconcilable. While TIP wants secession, TPLF, Salsay Weyane, and Baytona claim Tigray does not fulfil the structural preconditions that are essential for statehood.

Regarding TPLF, their prognosis of leadership and governance problems  runs up against their nearly 30-years of leadership at the federal level. How and why has Tigray suffered from such hunger and poverty despite being rich in natural resources such as precious metals and minerals? Why is Tigray threatened from the center after decades of fighting for survival and self-determination?

Can Tigray’s election serve as a beacon of Ethiopian democracy?
By Abel Tesfaye

For Baytona and Salsay Weyane, the question is that by becoming a nationalist and regionalist party and continuing as a member of the Ethiopian federation, how can the dream of a more prosperous and greater Tigray be realized without holding power at the federal level?

For Baytona, how feasible is the idea of forming a confederation, given the centralist tendencies of the federal government?

Regarding TIP, do studies demonstrate that Tigray fulfils the requirements for statehood? Would an independent Tigray be able to sufficiently feed millions of Tigrayans? Are calls for mobilization and secession motivated by existential threat, or nationalist emotion?

These questions demonstrate the depth of Ethiopia’s political problems. Existing tensions and confrontations between and within regional governments are reflections of structural contradictions embedded in the imperial expansion, failed state formation, and failed nation-building processes that Ethiopia has experienced.

A successful election in Tigray will demonstrate the possibility of conducting a general election in Ethiopia, despite the pandemic. Given the widespread protests and growing unrest in various parts of the country, Tigray could be seen as a beacon of autonomy for other regions, and could cause others to consider conducting their own self-facilitated elections. This could also create pressure on the federal government to re-think negotiations and ultimately ease the tense political situation in the country.

Main photo: A Tigrayan voter in Mekele on 9 September; submitted.

Abreha is a senior lecturer at Mekelle University with an MA in Peace and Conflict Studies and BA in Civics and Ethics. His recent research topics includes migration, command posts, and conflict resolution, especially in Gambella.