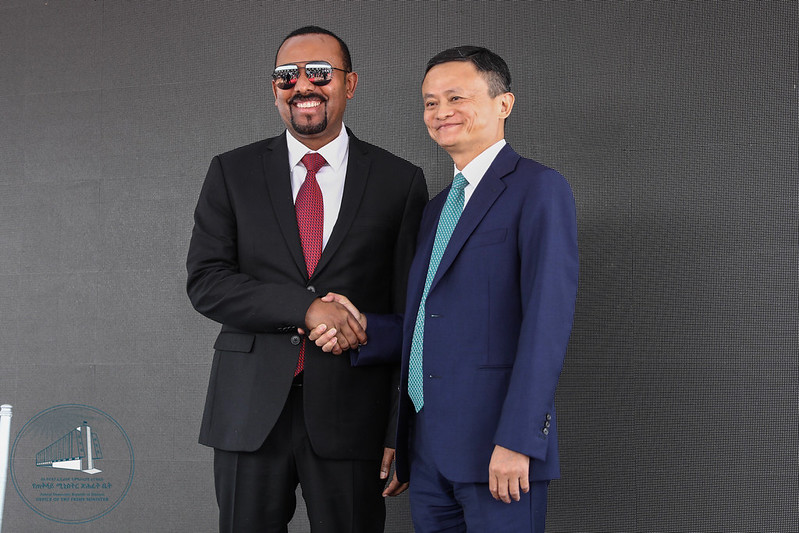 If reforms are to succeed, Ethiopian society should focus on building autonomous institutions, rather than expect political elites to stop grappling for control of them.

For the past two years, our country has been embroiled in conflicts that have claimed the lives of thousands and displaced many more.

Key institutions such as parliament and the judiciary, which were designed to check the excesses of state power, are as weak as they have ever been. Instead of building understanding and consensus, our political conversations have also become more and more corrosive.

We need to recognize that our problems are complicated and that they require cool-headed assessment, not social media shouting matches. In that spirit, we should draw lessons from the historical experiences of other countries when it comes to the daunting process of building inclusive institutions.

History books are littered with examples of leaders coming to power in the name of radical change and eventually reproducing the same extractive institutions that they sought to reform.

In fact, these cases are so abundant that the sociologist Robert Michels calls this empirical regularity the Iron Law of Oligarchy. Michels argues that the internal logic of any oligarchic structure, as a matter of fact any hierarchical organization, is such that it tends to be reproduced even when a different group of elites are in charge.

Thanks to recent advances in the political economy of development, especially due to the pioneering contributions of MIT economist Daron Acemoglu and University of Chicago political scientist James Robinson, we now know a great deal about why political and economic institutions matter, why they tend to persist, and how they change. In their magnum opus, Why Nations Fail, these scholars outline three important reasons why extractive institutions, like those in Ethiopia,  tend to persist.

In the Ethiopian context, this synergistic relationship was particularly evident in the March election fundraiser that was organized by Ethiopia’s ruling political party. While the Prosperity Party was able to raise 1.5 billion birr from business elites—the most ever by an Ethiopian political party—what was more remarkable was the fact that the businesspeople in attendance were very familiar faces. They were people who made their fortune under the previous regime and were its outspoken supporters. Most of them gained their wealth not because of their entrepreneurial prowess, but thanks to the symbiotic relationship that they had with the government.

It is the kind of relationship in which the business elite gives the ruling elite the financial resources that it then uses to sustain its clientelist and patronage relationships. On the other hand, the government gives these businesspeople all kinds of lucrative government contracts, de facto monopoly rights over some business sectors, and protects them against lawsuits for unlawful business practices.

The way Ethiopian Peoples’ Revolutionary Democratic Front’s (EPRDF) went about privatizing state-owned enterprises played a huge role in tilting the economic playing field and concentrating wealth. The biggest beneficiary of this privatization process was MIDROC, a company owned by the Saudi-Ethiopian business mogul Sheikh Al-Amoudi, which acquired about 60 percent of the privatized enterprises.

The case for partial privatization of Ethio telecom
By Fentaw Abitew

MIDROC had very close ties with the previous ruling party and Al-Amoudi openly backed EPRDF during the 2005 general election. Unsurprisingly, MIDROC also showed its support for Prosperity Party by giving 100 million birr during the election fundraiser.

The symbiotic relationship between business and political elites was succinctly articulated in the Prime Minister’s speech that night, where he reassured attendees that the “party will be working diligently to make sure that those who gave money in this election can afford to give five times more in the next election.”

It was a clear indication that the new regime is not about to disrupt the kind of symbiotic relationship highlighted above.

The second reason for the persistence of extractive institutions is that extractive political institutions, by definition, have weak safeguards against the arbitrary exercise of power.

Therefore, whenever a regime with an extractive political institution is replaced, the new regime also faces very little constraints acting against the misuse of state powers. In essence, power unchecked is power abused. It is no mystery that under EPRDF rule, Ethiopia’s critical institutions, including the media, judiciary, and legislature, were deliberately weakened to the point where they were enabling, not constraining, the power of the executive.

It is in this institutional backdrop that the current ‘reformist’ group came to power.

Everywhere you look in the country, it is evident that these institutions are still very weak, and have been unable to serve as a check on the excesses of power.

This is particularly evident in the justice system. For the country to come to terms with its history of gross humans’ rights violations and corruption, what is needed is meaningful accountability, justice, and reconciliation.

Instead of a fair trial and due process, what the victims got was a political circus that involved a series of documentaries and politically motivated prosecutions that target those who are considered to be threats. In the meantime, in the name of reconciliation and forgiveness, some key actors from the previous regime, whose hands are by no means clean of all past wrongdoings, are being appointed to high government positions.

Another recent example of selective justice came shortly after the tragic killing of musician Hachalu Hundessa, where the jailing of key political figures—including those who have absolutely no history of violent resistance, such as Lidetu Ayalew and Yilkal Getnet—seems to be more about frustrating government opposition than delivering justice.

This undermines public confidence in the courts at a time when we need them the most.

A further example of weak institutions is the state-owned and party-affiliated media which, instead of giving coverage to the most important issues facing the country and exposing the misuse of state power, focuses more on prime ministerial photo-ops.

It was quite disheartening, for example, to see state media giving more coverage to office renovation projects than the plight of the victims of ensuing civil violence. These media outlets have repeatedly refrained from conducting the type of investigative journalism that would uncover whether the recent violence had an ethnic and religious dimension and what its root causes were.

The third and final reason for the persistence of extractive institutions pertains to the fact that they raise the stakes of the political game by concentrating unconstrained power and economic resources in a narrow group of ruling elites. This means that whoever controls the state apparatus gains a lot from excessive political power and the wealth that it generates.

Therefore, various groups of people would do anything to seize political power and enrich themselves at the expense of others. As witnessed throughout history, this results in the type of infighting and civil war that not only brings an immeasurable amount of human suffering, but also reverses any gains made towards the political centralization needed to run a cohesive federal state, which is itself a crucial prerequisite for any kind of transition towards inclusive institutions.

This particular channel through which extractive institutions persist should be apparent to anyone who is a keen observer of contemporary Ethiopian politics. Stoking anger, fear, and division seems to be the surest guide to building a political career in the country.

At the time of writing, there are parts of the country where the government has failed to uphold its basic responsibility of maintaining law and order. There is a region in the country which has completely refused to take any directives from the federal government and held its own regional election without the will and supervision of the National Electoral Board.

Furthermore, we are increasingly witnessing the type of unrest and communal violence that has internally displaced 1.6 million Ethiopians. And in a manner very unusual in Ethiopian politics, we are also seeing the assassination of high-profile government officials and celebrities.

By now, anybody who is reading this understands that the forces that perpetuate oppressive institutions are formidable and that changing these institutions is no easy feat.

However, that is not to say that it is impossible, as some societies have managed to successfully transform their highly oppressive and extractive institutions into pluralistic and inclusive ones. From the Glorious Revolution in 17th century England, the French Revolution in 18th century, to Brazil’s transformation in the late 20th century, broad-based opposition movements have been fundamental in catalyzing such institutional transformations.

On the other hand, the track record of changes that were spearheaded by a narrow elite or a specific narrow interest is that of an unfailing reproduction of the same extractive institutions. The identity of the actors which are doing the extracting might change, the extraction might take a different form, but the institutions remain as extractive and oppressive as ever.

A good argument can be made that the struggle that brought the current regime to power consisted of a diverse and broad coalition of actors who understood that their economic and social ills were deeply intertwined with the country’s extractive political institutions.

In the years and months leading to the change, Ethiopians of different ethnic groups and walks of life showed an unusual solidarity and an impressive resolve in opposing EPRDF’s rule. I was particularly impressed to see the solidarity displayed by young people from Oromia and Amhara, whose activism and protests called for a fundamental shift in how political power was organized; not for minor policy fixes here and there.

However, if the opposition that brought the new regime to power was truly a broad-based coalition, then why are our political and economic institutions still extractive?

When the group led by Abiy Ahmed came to power, a significant number of Ethiopians started to think that the job was done. The prevailing narrative being that change came because a handful of highly courageous politicians staged a successful resistance against EPRDF’s rule from within. And that they, so the story went, were therefore capable of single-handedly leading the transition towards prosperity and inclusive institutions.

This, I believe, is the type of historical revisionism that is not only utterly wrong, but also very dangerous.

Of course, that is not to say that there has not been any government opposition in the country in the past two years. However, given that such an opposition has been ethnically polarized and splintered, and in light of the fact that some within such opposition movements are only seeking to be in charge of the state machinery in order to exploit its extractive institutions to their advantage, the type of government opposition we see today is nowhere close to generating the broad-based coalition that is required to build pluralistic institutions.

As such, it is important for the Ethiopian people to realize that the job of reforming the country is not done—in fact, it has only just begun.

The stakes are too great, and the implications are too profound, for us to put our faith in a narrow group of people, let alone an individual, to carry out the formidable task of building pluralistic inclusive institutions.

Historically speaking, it has never worked that way and, for obvious reasons, it never will.

Fikremariam received a BA Economics degree from the University of Toronto, and he is currently a pre-doctoral Research Fellow at the same institution.