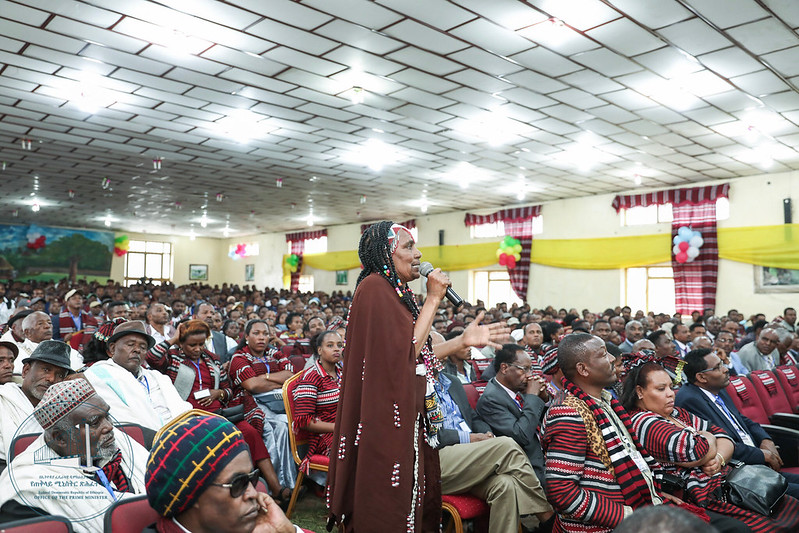 The prevailing federal view is that many more regional states in southern Ethiopia will stretch public resources, but it will also move government closer to the people.

In a historic 23 November 2019 referendum, the Sidama nation overwhelmingly voted to declare its autonomy from Southern Nations Nationalities and Peoples’ Regional State (SNNPRS), and so set it on the path to become the tenth regional state of the federation.

The Southern Nations government finally transferred power to the newly formed Sidama National Regional State (SNRS) on 18 June—bringing the fate of the remainder of the region back into focus.

In a response to these constitutional statehood demands, Prime Minister Abiy Ahmed has, on different occasions, said the NNPs will be better off—economically, culturally and politically—if they stand together as one rather than fragment; or, at least, if they are technocratically split into an optimal arrangement.

But, is he right?

Pro-government elites and politicians affirm Abiy’s position that a single administrative structure may afford stronger collective bargaining and mobilize more development resources. These arguments, however, often fail to acknowledge and address the root causes behind the requests: the lack of equitable investment in basic infrastructure and maladministration by both federal and regional governments.

Analysis of the economic, cultural and political aspects vis-à-vis the exercise of the constitutional right to statehood can shed some light on whether Abiy’s position is right.

The economic argument of the premier is that the establishment of multiple regions according to local wishes would increase administrative costs, including on salaries, which otherwise could be invested in basic infrastructure like road, health centers, education institutions, water, and electricity.

This may be a concern in theory, but it is not practically true in light of the factors that gave rise to the statehood demands.

In the south, there is a lack of investment in infrastructure, and existing infrastructure is concentrated primarily in Hawassa (capital of SNNPRS and now also Sidama Regional State’s capital), and to some extent other bigger cities, like Sodo and Arba Minch, while other areas like South Omo, Keffa and Tepi lack infrastructure.

The question, then, is not the quantity and quality of economic resource available but who benefits from them—the question of equity.

Mere mobilization of resources does not necessarily guarantee economic efficiency nor equitable use. A counter-argument is that the nearer the administrative center is, the less it costs to access it.

The Keffa people, for example, waste days and money to reach Hawassa via Jimma-Addis Ababa-Hawassa. The same is true for South Omo people like the Nyangatom living along the Ethiopia-Kenya Border.

Administrative costs, in fact, may divert economic resources at the formative stage of a new state in the short-term, but in the long-term address question of equitability, reduce the costs of accessing administrative centers, and assist accountable resource use.

The closer government is to people, the easier it is to question the administrators about how resources are being used. Peoples know what resource they have and whether they are deployed in the public interest. People know who is in charge of what and who is responsible for it.

Whether SNNPRS’s division into multiple ethnic-based regions erodes the socio-cultural cohesion of the diverse southern peoples is debatable.  One line of argument is that it may mean increasing elite-led ‘ethnic-nationalism’ and resultant ‘ethnic-antagonism’. But, hitherto existing arrangements gave rise to complaints of marginalization and evidence of antagonism anyway.

The relatively autonomous NNPs of the south had peacefully coexisted until they were cramped into SNNPRS. In this regard, Beza Dessalegn and Niguse Afesah argue that the merger of 56 ethnic groups under a single regional state caused aggressive competition among them for political power, triggering the autonomy demands. The increasing antagonism is, therefore, arguably, the result of competing interests under the current administrative arrangement.

Reorganizing SNNPRS into multiple regional states would remove the flashpoint of competition and resultant heightened ethnic antagonism. This, in turn, could foster enhanced mutual coexistence and economic cooperation among NNPs. Furthermore, it is not recognition of exercise of rights that leads to conflict—it is the refusal to grant those rights that fuels violence.

One of the common argument proponents of maintaining the status quo raise is that the division of SNNPRS into many more regions could cause fragmentation, which in turn could compromise collective bargaining power at federal level.

This line of argument may seem plausible for infant federal systems like ours where majority affiliation is important. It must be noted, however, that being the majority or minority is not the only determinant factor.

To the contrary, consent-based formation of more regions could remove the current antagonism borne out of power-and-resource-based conflict of interests. This, in turn, promote mutual respect and cooperation among NNPs for their common good and strengthen their collective bargaining power for that common interest.

Above all, it is illogical to talk about weakening collective bargaining given the ongoing antagonism and fragmentation that gave rise to the statehood demands.

Decades-old demands for statehood were revitalized by Abiy’s arrival in April 2018.

The three issues repeatedly raised by the representatives were autonomy requests; demands for better and more roads, health centers, educational institutions, and electricity and telecommunication services; and complaints about lack of good governance.  The complaints could be seen to underscore the need for more autonomy, if that would help improve governance.

Abiy downplayed statehood as a continuation of nearly three decades of ruling coalition’s rhetoric of “forging unity in diversity” which ultimately failed to deter Sidama’s quest for statehood that had been in place since the formation of SNNPRS.

Similarly resilient demands particularly by Wolayta, Gurage and Keffa, despite a violent crackdown on the former by government security forces, indicate the unsustainability of attempting to maintain the status quo.  Abiy conceded that there is a need for widespread deliberation by referencing the relative lack of discussion during the formation of the region in the mid-1990s. He reasoned, “it is foolish to maintain 56 NNP as single state nor appropriate and feasible to grant each NNP (56) a separate state.”

However, while the premier is on solid footing with that statement, a firm middle ground has not yet been discovered.

Last year, a Southern Ethiopian People’s Democratic Movement (SEPDM)-commissioned a “scientific study” which recommended either maintaining the south as single region; splitting it into two or more regions; or delaying statehood requests. The premier, however, established another 80-member committee with the mission to “consult people” and report their findings for further discussion.

It seems that Abiy’s understanding is in line with second recommendation of the “scientific study”: to divide the south into several regions.

According to the prime minister, the committees will discuss with all special weredas and zones regarding the desirable number of regions and their composition. The factors he suggested are popular consent, cultural interactions, geographical proximity, and economic impact.

The Ethiopian constitution articulates the right to self-determination of NNPs as an unconditional one that includes secession from the federation. But, according to the premier, the recommendation of the committee tasked to determine whether to reorganize SNNPRS is conditional on government implementation capability, suggesting that restructuring is based on administrative efficiency.

This removes statehood requests from being a constitutionally guaranteed unconditional right and makes them subject to federal whim.

The prime minister equates a multiplicity of new administrative structures with additional administrative expenditures that divert resources from infrastructure and other economic development. This argument hinges on the availability of resources, the ability to mobilize revenue such as taxes, and how they are administered.

While addressing parliamentary questions, the prime minister said his administration “will not waste additional time in dealing with the statehood demands nor give ultimate decision over it but will refer it to House of Federation (HoF) which has jurisdiction to decide.” In a meeting held in the capital the premier warned high ranking administrators from the zones and special weredas of the region not to fuel the statehood requests. He instructed them to convince their respective constituencies and agree among themselves on the basis of popular consent, cultural interactions, geographical proximity, and economic impact.

The cumulative reading of the federal constitution provisions 39(5) and 47(2) guarantees the unconditional right of every NNPs to establish their own states without pre-condition. By referring the matter to the HoF, the premier may seek to base extra-legal conditions on firm legal ground through constitutional interpretation.

Reorganizing SNNPRS should be voluntary after consultation with the people concerned.

Mere delegate and elite-level consultation is insufficient as grassroots discussion is necessary to secure informed consent. The issue to resolve now is how to restructure the region in a democratic manner so it is administratively efficient, economically viable, and politically sound—and so it maintains the status quo of cultural interaction among the people.

This approach would help ensure equitable infrastructure investment, accessibility of offices, and above all can be a long-sighted solution for future division of assets in case new regions emerge. The current discussions over ownership and asset division of Hawassa can serve as a lesson.

There should also be a clear law for ensuring the representation and participation of each NNP in the new administration. There should not be a monopoly of one group over regional affairs as that leads to antagonistic competition. Good governance should also be a guiding principle for all newly formed regions as one of the basic drivers of the statehood requests is maladministration and inequitable resource distribution.

The right of southern NNPs to establish their own regional states in pursuit of their constitutional rights to self-determination must be respected. If last month’s incident in Wolayta is any indication, obstruction of these rights and undue delay is causing further deterioration of peace and security, often resulting in the unnecessary loss of innocent lives.

Failure to resolve the statehood demands in SNNPRS before the upcoming national election would likely only exacerbate the situation.