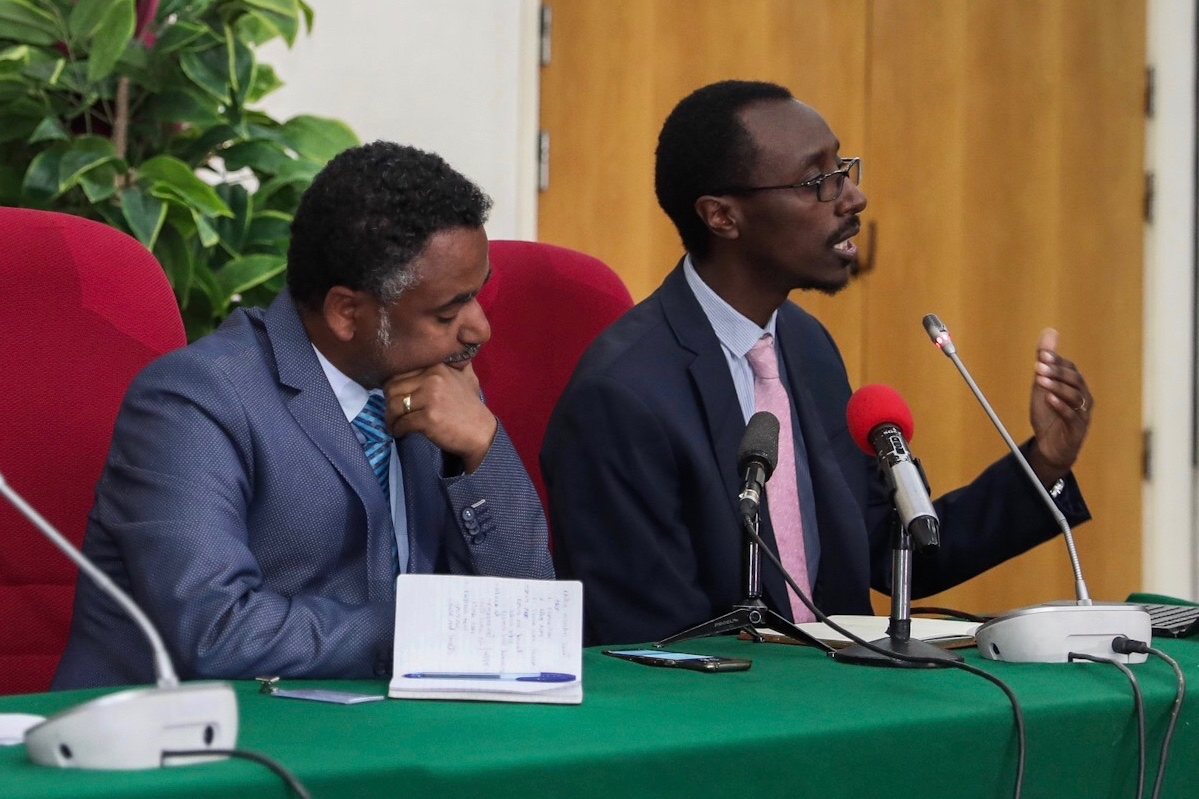 Politicians and their lawyers complain that the government’s top legal officer undermined their right to a fair trial.

Judges on 1 October urged the Federal Attorney General to provide a written statement to the High Court explaining a recent comment to the media, after Jawar Mohammed and Bekele Gerba, two on trial opposition politicians, said his intervention assumed their guilt.

At a 24 September press conference, Gedion Timothewos Hessebon had said: “There were hundreds of people who have been directly affected by the violence these individuals have instigated and incited. We have to distinguish between peaceful lawful political mobilization and the kind of rhetoric, the kind of ultranationalist militant violent political activism that results in death and injury of citizens.”

On 21 September, federal prosecutors charged Oromo Federalist Congress leaders Jawar, Bekele, and 22 0thers with crimes including training a terrorist group in Egypt with the intention of toppling the government by force and attacking Amhara people and Orthodox Christian Church officials, as well as killing a police officer in the aftermath of the 29 June killing of singer Hachalu Hundessa.

Both Jawar and Bekele condemned Gedion’s comments, while their attorneys submitted a written complaint saying he violated fair trials rights under Article 14(1) of the International Covenant on Civil and Political Rights, which Ethiopia has ratified, as well as Article 20 of the Ethiopian Constitution regarding the right to be presumed innocent. “The statement endangers the defendants’ presumption of innocence and hinders the fairness and neutrality of decisions this court will render,” they wrote.

Jawar said: “The statement of the Attorney General is one that discards our presumption of innocence. Politician and high government officials, especially the Attorney General, are making it seem like our guilt is already decided. He called us ‘ultra-nationalist and militant’. This doesn’t only interfere with the trial, it’s also threatening for my life. I ask the court to summon the Attorney General and hold him responsible for his action.”

Bekele called for Gedion’s resignation: “The Attorney General gave a defamatory statement to foreign media in a situation we cannot defend ourselves. This leads us to question his neutrality. He has committed a crime against the justice system. He has to resign and the court should hold him responsible.”

Gedion did not answer when Ethiopia Insight tried to contact him on his mobile phone today.

Bekele also requested a clarification regarding the charges that were read at the hearing, but the court said that should be included in the written response. Defense lawyer Kedir Bullo told Ethiopia Insight “The whole point of reading the charges in the court room is to make sure defendants sufficiently understood what they are being charged for.”

Despite the defence not making a request, the court stated that bail cannot be granted because the charges include causing fatalities and could lead to prison sentences of 15 years or more. Kedir said the move breached procedure: “We planned to make the request after going through evidences brought against each defendant and the submission of written arguments. Since there is no point in arguing the decision right away, we will submit a written complaint to the court explaining our position.”

The defendants complained about detention conditions at Kilinto prison, where they have been since 25 September. Another OFC leader, Dejene Tafa, said he is concerned for his safety, as individuals in plain clothes watch him at night. “This government tried to assassinate me three times” he said, referring to not just his experience at Kilinto, but his exposure to COVID-19 after being arrested, and a previous incident. The court ordered for the defendants’ rights to be respected and for the prison administration to submit a written explanation at the next hearing regarding Dejene’s issue.

The defense was asked to submit their written response to the charges by 2 November, and the judges adjourned the trial until 27 November when the prosecution will respond to the defense’s arguments.