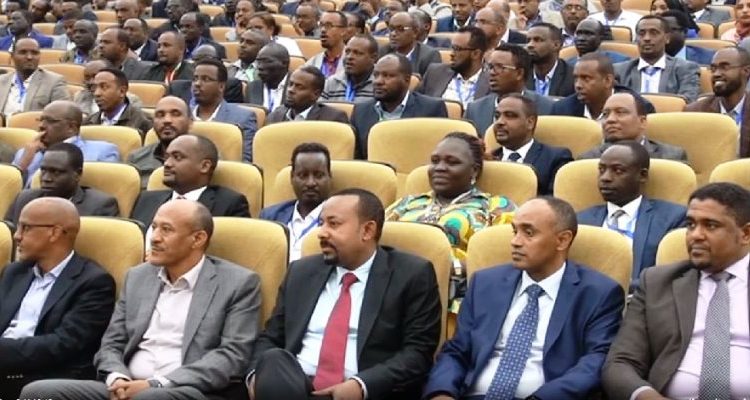 Contrary to the claims of ethno-nationalist activists, Prosperity Party and the TPLF are aligned on multinational federalism.

Since Tigrayan forces took over the federal military in the region on November 4 in partnership with conspiring officers, the resulting conflict in northern Ethiopia has caught the international community’s attention.

While the immediate cause is clear – an official of the regional ruling party, the Tigray People’s Liberation Front (TPLF) admitted the “pre-emptive strike” on the army – observers disagree on the underlying motives.

Some analysts have focused on the TPLF’s supposed commitment to the “multinational” or ethnic-federalism ideology – apparently threatened by Ethiopia’s allegedly unitary-minded government – but that is the weakest argument.

With TPLF factions likely to wage a protracted guerrilla war, it is now vital to differentiate between fact and fiction regarding their agenda.

As the TPLF leadership accumulated significant wealth (including a powerful conglomerate) since it took over Ethiopia in 1991, retaining that economic power was the driving force behind the TPLF’s resistance to changes to Ethiopia’s political-economy since 2018.

It took many years of sacrifice by nonviolent Ethiopian protesters, initiated by the pro-democracy movement during the 2005 election, before the TPLF was ultimately sidelined by reformers inside the government led by Abiy. However, since Abiy came to power in 2018, his administration was unable to do much about TPLF’s regional control after the party refocused its power there.

Human Rights Watch (HRW) was among those who criticized Abiy for inadequately pursuing transitional justice and accountability for past crimes. The premier appeared to some to be too soft and forgiving. Abiy’s new government also was slow to reform the military, where ethnic Tigrayans who dominated more than half of the mid-to-high level positions, despite making up only 6 percent of the country’s population.

This Tigrayan dominance in the Ethiopian military establishment was so deep that, after the TPLF coordinated with Tigrayan generals to cripple the Northern Command, Abiy’s administration was scrambling, as late as 5 November, just to replace the defecting officials, by recalling retired generals for help.

There is therefore a case to be made that Abiy was engaged in appeasement when it came to TPLF’s military and political power since he became Prime Minister. In contrast, the one sector of TPLF dominance that Abiy’s government did touch was their economic power. As early as November 2018, some Tigrayan military officers profiting from multi-billion dollar ventures were charged with corruption.

Unfortunately, this complex reality of a multidimensional rationale behind TPLF’s gamble has been misrepresented by some. Disregarding the economic power variable and the intricate web of TPLF’s motives complementing each other, some analysts have been erroneously fixated on one part: its ideological interests. One of these interests is said to be TPLF’s commitment to multinational or ethnic federalism as opposed to Prime Minister Abiy’s alleged infatuation with a unitary system.

Beyond ethnic federalism
By Olivia Woldemikael

But this is another myth designed to weaken the post-2018 reform.

One of the major misconceptions about Abiy’s ruling party is it opposes federalism. In reality, his Prosperity Party (PP) remains the vanguard of the multi-national (ethnic-federal) structure established largely by TPLF. Not only is this federal framework still intact today, Abiy’s administration in fact granted statehood for a new autonomous region of the ethnic Sidama in 2019, albeit after some prevarication. In contrast, Sidama nationalists were denied autonomy by the TPLF-dominated EPRDF for almost 20 years prior.

The most militarily active insurgency in Ethiopia since the 1990s was the Ogaden National Liberation Front (ONLF), whose objectives are autonomy and self-determination up to secession for Somali-Ethiopians. After Abiy took over in 2018, for the first time in decades, the ONLF decided to abandon armed struggle and to peacefully oppose his government.

And this is in part due to Abiy’s Prosperity Party officials who defend ethnic federalism on the ground. One of these leaders is President Mustafa Omer of the Somali state, who publicly denounces the TPLF as an anti-democratic and anti-federalism force in Ethiopia. Somali nationalists are not alone, since some Afar leaders and other ethno-nationalists have also put their trust on Abiy.

The Oromo acting mayor of Addis Ababa Adanech Abebe even declared fluency in two languages as a prerequisite for prospective employees of the federal government: a policy that gives preferential treatment for Shoan Oromos due to their numbers and proximity being the multilingual majority living in the Addis Ababa metropolitan area.

While Abiy’s support for multinational federalism is clear, those who claim dangers of a unitary Ethiopian state – defining it as dominance of Orthodox Christianity and Amharic language – are enough to drive the conflict in Tigray are disingenuous. In reality, Tigray is the state where Amharic is already the second-most widely spoken language. Under TPLF’s own rule since the 1990s, Amharic has been maintained inside Tigray towns, a move that helped increase the number of Tigrayans in the federal bureaucracy, in which Amharic is the main language.

Also, historically, Amharic and Tigrigna have a common lineage back to Ge’ez and share the same script; while Orthodox Christianity is actually more widely practiced in Tigray than in Amhara.

One of the reasons why Somalis and other ethno-nationalists support Abiy is because TPLF placed ethnic federalism on paper, but never in practice. It also was self-dealing during the 1990s, what I call the “scramble for Ethiopia.”

What is the point in Amhara nationalism?
Teshome M. Borago

During the formation of the new administrative borders, TPLF rewarded itself Welkait and Raya; while rewarding Oromo nationalists most of the former Shewa province to weaken Amhara. In essence, Amhara was never involved in the original decision-making process, when TPLF and its junior Oromo partners carved up Ethiopia. Even after the new lines were drawn, Tigrayan officials were the de facto rulers inside other states, like Somali.

In Oromia, critics allege the TPLF leadership used it as a wedge to divide Amhara against Oromos for decades. Meanwhile, up north under TPLF rule, territories that would otherwise could have been under Amhara and Oromo jurisdiction became part of Tigray due to the preponderance of Tigrinya speakers. Therefore, Tigray essentially became a unitary state since 1991, imposing the Tigrigna language on Amhara, Oromo, Kunama and other communities.

If there is an ideological basis to the conflict in Tigray, it is not TPLF’s commitment to ethnic federalism, but rather TPLF’s opposition to a new multiparty and pluralist Ethiopia where its political power monopoly (thus its leadership’s economic interests) will be threatened.

In fact, according to AFP’s latest report, the TPLF started digging trenches in anticipation for war seven months ago. That was around the time its leadership in Mekelle decided to defy federal rulings and organize its own tightly controlled election that ultimately helped itself ‘win’ almost all the votes in Tigray while its established opponents boycotted the poll.

Therefore, It is not Abiy’s alleged centralization scheme, but rather, it is the promise of a bright democratic future which is the only possible explanation of why two very contradicting opposition groups – the most ethno-nationalist party (ONLF) and the most Ethiopian nationalist party (Ezema) – have both put their trust in Abiy to transition them to a new Ethiopia.

While Abiy’s government received support from all ethnic regional states, some political analysts with their own agenda focused only on the temporary support he enjoyed from Amhara nationalists and Ethiopian nationalists.

Amhara nationalists and Ethiopian nationalists were the two most disenfranchised blocs under EPRDF rule for decades. These two blocs know that Abiy’s government wants to keep the ethnic federalism status quo which they oppose. But they still support Abiy’s administration based on hope.

In fact, Ethiopian nationalists – often urban or mostly mixed Ethiopians who descend from two or more ethnic ancestry – are not even counted on the official census. EPRDF made it illegal to recognize millions of mixed Ethiopians who identify as ethnic Ethiopians because it wanted to justify a new constitution in 1995 that depicted Ethiopia as a country made up of discrete “nations, nationalities and peoples”.

Yet Ethiopian nationalists support Abiy over TPLF because of his promise of a future democratic election, where their voices will be heard and where their constituencies will finally enjoy representative democracy. If anything, Abiy’s ruling party is ideologically closer to TPLF on paper than to Ethiopian nationalists. But TPLF did not want to share power with any entity, and assumed it could regain power militarily.

In addition to bringing TPLF culprits to justice, the conflict in Tigray is about equality for all, pluralism and to have every region playing by the same rules. It is a battle to grant all Ethiopians the freedom to choose our destiny.

Main photo: Prosperity Party leaders at a training in Adama on 25 January 2020.

Teshome is an accountant and political analyst. He previously worked for the the Coalition for Unity and Democracy and was co-founder of the defunct Yeroo, a pioneering Qubee Oromo media