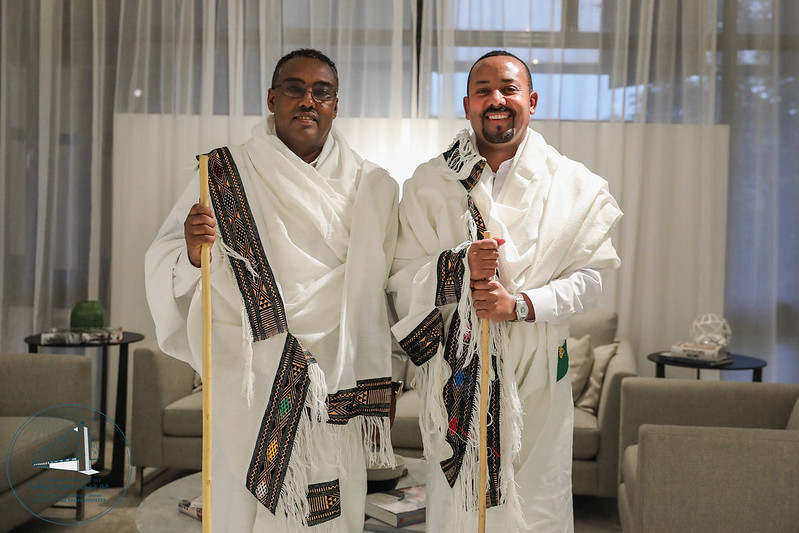 Abiy and his Amhara supporters are in the ascendancy—but Ethiopia’s future is by no means assured.

Nominally in an effort to restore law and order, the federal government led by Ethiopia’s peace prize-winning premier is engaged in a brutal conflict with the defiant erstwhile leaders of Tigray region.

Tens of thousands of refugees have fled, militias have hacked civilians to death, and an unknown number of lives have been lost.

Despite Abiy Ahmed’s quick-win claims, he has plunged the country into what is likely to be a prolonged civil war that may exacerbate others and even tear the country apart.

Late on 3 November, with the world glued to the U.S.’s electoral theatrics, Abiy said Tigray’s forces attacked the military, and he adapted the Powell Doctrine for limited war. He informed Ethiopians that he sent federal forces in with clear, limited, and achievable objectives to restore the rule of law and constitutional order.

While sudden, the outbreak of full-blown conflict did not surprise observers of Ethiopian politics.

The long-simmering tensions between the premier and the Tigray People’s Liberation Front (TPLF) were there for all to see. The parties had openly prepared their forces for armed confrontation.

The question is, why has Ethiopia returned to war to settle political disagreements?

Two years ago, a popular uprising, mainly in Oromia and Amhara regions, brought the country to the brink of collapse. To avoid the Ethiopian state’s disintegration, the reform architects agreed for the transition-to-democracy to be led by the ruling party itself, with new faces taking the helm.

Hence, from the outset, it was apparent that the change would be nothing but ‘old wine in a new bottle’.

“Reform from within” was preferred to “revolution” to avoid a state collapse since TPLF controlled the national intelligence, military, and various state apparatus. Hence, if “revolution” was chosen, the architects, such as Jawar Mohammed, believed, it would have proved to be bloody, tearing apart Ethiopia.

The 2018 (s)election of Abiy as coalition leader and prime minister initially engendered hope. Impressive steps were taken to open the political space, suggesting the country was finally on the road to democracy.

However, the premier failed to reconcile and reintegrate the Tigrayan political, security, and economic elites into the ruling structure, and thus they felt disenfranchised and targeted.

Hence, the trust deficit between the federal government and Tigrayan elites complicated the fragile relationship, embroiling the country in armed conflict.

Is that all? No. Reasons abound.

The trust deficit between the federal government and TPLF boils down to two crucial factors: power and ideology.

Both Abiy and TPLF want to shape Ethiopia’s future but they have clashing visions—hence, the power struggle.

Although the ruling Ethiopian Peoples’ Revolutionary Democratic Front (EPRDF) was a coalition of four parties, the TPLF, representing under 10 percent of the Ethiopian population, had been in the driving seat since 1991. Unwilling to accept its new junior status in Ethiopian politics, the party embarked on an attempt to discredit Abiy.

According to the government, TPLF undermined Abiy’s rule, incited conflict and peddled hatred, conducted regional elections (for right or wrong), and, more importantly, showed interest in reclaiming the power they lost in the name of championing a federalism they had trampled upon.

Abiy, perhaps convinced by his mother’s prophesy, was also in pursuit of power at all costs.

“No possibility, under the same roof,

Unless one defeated and a subject he becomes.”

The second contradiction stems from the type of government system. Again, there exist two irreconcilable camps.

The right-wing group, primarily drawn from the Amhara and urban elites, wants to bring back a centralist system. They consider the current system as the mother of all political problems and the cause of its instability. Abiy, especially after losing his Oromo nationalist credentials, subscribes to this camp, and both are associated with the “Make Ethiopia Great Again” “የኢትዮጵያ ከፍታ” slogan.

MEGA is for Abiy a means to an end: his self-aggrandizement. For other elites, MEGA is a return to yester-year, to Ethiopia’s cultural and political monopolization by Amhara. Ethiopia`s continuity, unity, and stability depend on cleansing it from TPLF and its political legacies, meaning the ethno-federal system.

Members of this camp trace Ethiopia’s political quagmire to its imperial roots and see the constitution and federal system as right for establishing Ethiopia as a democratic state since most Ethiopians never attained full citizenry status under past systems due to formal discrimination. They see a call to past “greatness” by the right-wing camp as an invitation to renewed servitude and dispossession.

For them, Ethiopia’s stability, unity, and continuity depend on the full implementation of the constitution and the federal system.

Abiy went through two phases since coming to power.

In the first, he was the champion of Oromo nationalism. “Oromo not only knows how to lead a nation but also how to build it. Together, we can build East Africa and the entire Africa. No force on earth can stop us (from doing this),” said Abiy, speaking to his Oromo comrades in Jimma on  18 March 2019.

Hence, Oromo elites started to think of themselves as the saviors of not only Ethiopia but also the Horn. The troubled Horn of Africa will heal by “Kushitic” panacea, the Oromo elites asserted.

But alas, their hopes were dashed quickly following the killing of the famous singer Hachalu Hundessa and Jawar Mohammed’s arrest, a heavyweight politician who challenged Abiy’s leadership of the transition.

Oromo elites are now among Abiy’s fiercest critics, costing some their lives and others their freedom.

Displaced from the Oromo camp by politicians with better nationalist credentials such as Lemma Megersa and Jawar, Abiy pitched up in the right-wing camp. He embraced the pan-Ethiopian agenda and tipped the balance of power in favor of the anti-multinational federalists, starting his second phase.

To this end, Abiy established the Prosperity Party (PP)  in 2019 by dissolving three ex-EPRDF parties and five allied parties ruling the so-called “developing” states. The death of EPRDF, established by TPLF largely to do its bidding, sealed the end of TPLF hegemony.

One might also argue that Abiy has not joined any of the camps but has his own agenda.

For instance, as the Amhara inherited the Tigrayan thesis of Ethiopianism and wrote their antithesis; similarly, the Oromos synthesize the modern-day Ethiopia of the Menelik II mold. Maybe Abiy is infusing new Oromo energy into the synthesis again, so that what Oromos lost could be reclaimed, mutating Ethiopia into a new Oromo-tinged kaleidoscope.

Unsatisfied with prominent Oromo politicians’ jailing, the right-wing camp eyed their most significant prize—to crush the TPLF, a force behind the federalist camp.

The Amhara thought it was an opportune time to re-control contested areas they lost to TPLF in the last three decades: Raya and Welkait. This Amharic expression aptly describes their intent “ተከዜ አፋፍ ላይ ካልሰራኹኝ ቤቴን

Until built by all means,

My house towering on Tekezze hills,

Higher up, till standing on its cliffs,

Consider I, never been born,

Appraise my mother arid and barren.

The Ethiopian ethno-federal constitution is the key target of Amhara elites. For them, TPLF introduced it to undo the nation-building project of their ancestors, pit Amhara against other nationalities, and sow the seeds for the undoing of the country.

The Amhara elites are determined to avenge the humiliation they suffered at the hands of the TPLF and its cronies for the last three decades and take their ‘rightful’ position in Ethiopia`s politics.

Who thought Abiy would survive after imprisoning Jawar? And after taking on his biggest threat, the TPLF?

Now, it seems a rerun of 1979 with Abiy taking Colonel Mengistu Hailemariam’s role. Colonel Mengistu emerged victorious from both internal and external threats against his rule. However, the initial victory did not save Mengistu from his final defeat; and it prolonged Ethiopians’ misery.

Similarly, Abiy and Ethiopia’s future has not been sealed by the federal control of Mekelle, nor by the capture and killing of TPLF leaders. Instead, it all depends on how Abiy plays the emerging multi-dimensional chess game, taking into consideration:

Ethiopia’s ideal case would be to bravely look the facts and for the warring political tribes to reach a consensus before the 5 June election. That is, however, unlikely given the current context.

Instead, below are the three most likely scenarios for Ethiopia’s future under Abiy:

The election will take place amid high security and some turmoil, especially in Oromia, Tigray, and Southern Nations. Opposition parties will likely share around a quarter of federal seats to make the election plausible and enhance the government’s legitimacy.

However, there is also now the likely non-participation of the main Oromo opposition parties. If this happens, the legitimacy of the state suffers a big dent.

Regardless, with any kind of majority, Prosperity Party would probably attempt to negotiate a new federal arrangement not based on ethnicity so that the empire state of Ethiopia shall continue with the ‘right’ amount of change and continuity.

The second scenario would emerge alongside genuine regional state power. The shift of power from the north to south Ethiopia would contribute to the early retirement of the Abyssinian empire

Another factor pushing this scenario is the Amhara reaction to incidents. The Amhara, the self-proclaimed custodians of Ethiopia’s empire state, are nervous, for instance, about the existence of paramilitary security forces that they think empower regions to defy the central government. But if there is federal over-reach in this area, it could well cause a violent and destabilizing backlash.

More so, Amharas, unlike other major ethnic groups, live in all parts of Ethiopia. Emotions stemming from the targeting killings of Amharas in other regions, if not tamed, would re-energize other groups’ grievances, pushing the country closer to widespread civil war.  We can see this playing out in Benishangul-Gumuz already. Further instability may also be prompted by the sorry state of the Ethiopian economy, with youth unemployment rising even pre-pandemic.

An internal power struggle coupled with external pressures from Sudan and Egypt may develop into a wider regional war that urges the country to proclaim another national State of Emergency (SoE), leading to the incumbent’s continuation for an unspecified time.

The risk here is unbearably high. However, the war would be an excellent chance for Abiy to stay in power and crush remaining opponents

The result of this would be unpredictable but has comparable opportunities for disintegration and unity. For instance, what if the army takes control to ‘save’ the country from collapse, as happened in Egypt in 2013?

Ahmed is a development worker with over a decade of experience working in Ethiopia and the Horn of Africa. He can be reached at ahmesau3@outlook.com