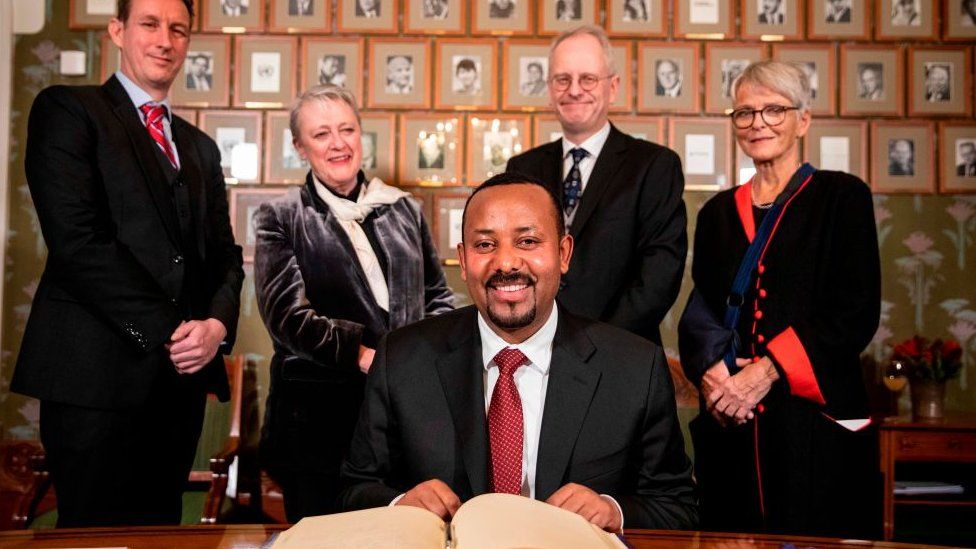 On 11 October 2019, Berit Reiss-Andersen, Chair of the Norwegian Nobel Committee, announced that the Nobel Peace Prize had been awarded to Ethiopian Prime Minister Abiy Ahmed.

Ms. Reiss-Anderson explained that “Abiy Ahmed quickly worked out the principles of a peace agreement in close cooperation with Isaias Afwerki, the President of Eritrea…when Prime Minister Abiy reached out his hand, President Afwerki grasped it, and helped to formalize the peace process between the two countries.”

Exactly one year later, President Isaias Afewerki concluded one of many official visits to Ethiopia with a tour of the Ethiopian Air Force base in Bishoftu. Twenty-two days later, on 4 November, Prime Minister Abiy Ahmed announced that he had authorized military operations in Tigray as a response to Tigray regional forces attacking the northern command of the Ethiopian National Defense Force (ENDF).

One hundred days since the start of the conflict, Tigray, a region of six million people that was stable enough to hold regional elections in the middle of the Coronavirus pandemic, is now in tatters.

Over 60,000 civilians have fled into neighboring Sudan, an estimated two million people are internally displaced, and there is a real danger of population-wide famine at a scale not seen for decades; and ominously there are widespread reports of extrajudicial executions of civilians, looting of private property, destruction of public and historic institutions, and sexual violence.

On one side, the belligerent parties in this conflict comprise the Ethiopian army under Abiy and the Eritrean army under Isaias. On the other side are forces loyal to the ousted Tigray regional government.

The formidable military alliance between Ethiopia and Eritrea has proven to be very effective in overwhelming the forces loyal to the Tigray People’s Liberation Front (TPLF), Tigray’s ruling party. The execution of the military campaign launched by the Ethiopian army from the south of Tigray, heavily supported by the Eritrean army from the north has squeezed the TPLF into a dead-end. Many TPLF leaders have been killed, arrested, or are on the run. Most towns and cities in Tigray are now under the control of Ethiopian and Eritrean forces.

In the eyes of the Ethiopian and Eritrean leadership, this military accomplishment is an important milestone in the journey they had embarked on two years earlier to establish peace. They both viewed the TPLF as the main stumbling block in the resolution of the conflict between the two countries.

The TPLF was openly critical of Abiy’s peace initiative. From the outset, both the Ethiopian and Eritrean governments showed little interest in engaging the TPLF during their discussions, even though Tigray possesses most of the boundary between their two countries.

Moreover, there were clear indications that Abiy and Isaias regarded the sidelining of the TPLF as a prerequisite, if not one of the goals of their rapprochement. As Abiy pushed for the end of hostilities and for normalization of relationships with Eritrea at a breathtaking pace, he was also busy cracking down on veteran TPLF leaders that had overseen key Ethiopian government security agencies for years.

In a rally in Asmara on 20 June 2018, he announced that he was reciprocating the Ethiopian Prime Minister’s call for peace by sending a delegation to Addis Abeba. In that same speech, he declared that it was “Game Over” for the TPLF “although it will require time and efforts to remove the TPLF’s toxic and malignant legacy”. This was his first public pronouncement on the prospects of peace between the two countries and it was delivered while the TPLF was still a major partner in the sovereign government that had just extended the olive branch to his country.

It had been argued that the peace process initiated by Abiy and enthusiastically reciprocated by Isaias lacked transparency and was replete with secret dealings at the highest levels of the executives of both governments. The public platform of the proceedings was consumed around the close personal relationship between Abiy and Isaias.

The peace treaty that it produced was short on specifics, and it did not stipulate for parliaments in either country to ratify the agreement. Two years after the signing, the parties to the peace agreement have successfully executed a military campaign in Tigray through enormous mobilization and commitment of resources by the governments of both countries.

The peace initiative that has brought the leaders of Ethiopia and Eritrea to sign the Jeddah Treaty just over two years ago and hailed by the Nobel Peace Prize Committee shortly has been revealed as a single-purpose military bond.

This military alliance against the TPLF is the most concrete outcome of the Jeddah Peace Treaty.

Key stipulations surrounding the peace treaty have been selectively implemented or ignored, resulting in favorable conditions for the goals of the military alliance.

The secret war in Tigray
By Mistir Sew

The peace treaty initiated by Abiy just over two years ago has, in fact, enabled a devastating war in Tigray. The commencement of hostilities was announced in Addis Abeba last November, but the countdown to war may have started two years earlier, when the Ethiopia-Eritrea Peace deal was signed in Jeddah on 17 September 2018. The military campaign in Tigray involving the coordinated mobilization of the bulk of the armed forces of Ethiopia and Eritrea was launched just over two years later.

The timeline of the peace process that led to the Nobel Peace Prize and the detailed military campaign involving the armies of two countries that had been hostile to each other for over 20 years are too close for comfort.

The inescapable question is, of course, whether the peace treaty was a de facto pact of war from the outset. Given the scale of the devastation unfolding in the aftermath of the war in Tigray, it is imperative that this question be answered, especially by those who were influential in the endorsement of the peace agreement.

The Nobel Peace Prize was a public recognition of Abiy’s efforts to reconcile with the State of Eritrea, and, by extension, an endorsement of the peace treaty.

The prize provided Abiy enormous latitude and credibility both within Ethiopia and internationally. Moreover, the acknowledgment of the Nobel Committee afforded valuable integrity to a peace process that was explicitly short on details.

The months following the Oslo recognition saw the Ethiopian Prime Minister receive accolades everywhere he went and the treaty he signed championed as an important milestone in world peace. These same months also saw the build-up towards the Tigray conflict with simmering tensions between Abiy’s federal government and the TPLF-led regional government. The dangerous standoff between the two sides gathering steam while the glow of the Nobel recognition was still shining prompted little to no alarm from Ethiopians or the world at large.

Perhaps the most consequential effect of the Nobel endorsement, however, was the slowness with which the world reacted to the onset of the war in Tigray.

The commencement of the armed conflict was announced by Abiy after forces loyal to the TPLF stormed and neutralized the ENDF’s northern command stationed in Tigray. However, Ethiopia had asked Sudan to close the border between the two countries days earlier, suggesting that plans to engage the TPLF were likely in the final stages even before the strike on the northern command.

This is supported by the rapidity with which Ethiopian and Eritrean forces leaped into action hours following the Prime Minister’s announcement. Moreover, Amhara’s police commissioner said, a month or so after the intervention, “…therefore we have already done our homework, and accordingly deployment of forces had taken place in our borders from east to west. The war started that night after we have already completed our preparations.”

The conflict began with swift and complete isolation of the Tigray region and its inhabitants. The military offensive involved the massive mobilization of Ethiopian and Eritrean forces advancing along wide fronts supported with heavy artillery and air power both from the South and North of Tigray.

The impact on the civilian population was immediate and catastrophic. Yet, it took months for the world to officially confirm and condemn the participation of Eritrean troops in the conflict.

Was the peace treaty between Ethiopia and Eritrea part of a tactical alliance between the two leaders against the common enemy, the TPLF? Did the Nobel endorsement afford enough goodwill to shield the government of Ethiopia from appropriate scrutiny as it prepared to liquidate an armed political rival with dire consequences to a segment of its population?

These are key questions the Nobel Peace Committee will have to grapple with as the horrors of the war in Tigray begin to see the light of day.

The impending famine in Tigray
By Mistir Sew

The Nobel Institute staffed with technical and academic expertise supports the five members of the Nobel Prize Committee with required research during the selection process for potential awardees. If the research undertaken into the fabric of the peace process between Abiy and Isaias lacked the necessary depth, some soul searching will be inevitable. The implications of the stamp of approval of the Nobel Prize Committee on a Peace Treaty that has laid the foundation for a devastating war on the people of Tigray cannot be dismissed lightly.

In the address to the 1994 Nobel Peace Prize ceremony, the then Chairman of the Norwegian Nobel Committee, Francis Sejersted, summarized the Committee’s modern interpretation of Alfred Nobel’s last will. The intention of the committee, he explained, is not “to hand out certificates of good conduct, but simply to reward practical work for peace.”

Over decades, this abstraction of Mr. Nobel’s wishes has served well to shield the Nobel Committee from many legitimate challenges to their choices; the 1973 award to Henry Kissinger and the 1994 choice of Yasser Arafat are some examples. It may be unprecedented, however, that events that transpired so soon after the 2019 award ceremony have raised disturbing questions about whether the recipient was, in fact, involved in the above-quoted “practical work for peace.”

At best, the 2019 Nobel Peace Prize may have been awarded without merit and, at worst, it may have afforded cover and legitimacy to a brutal war whose devastating consequences have yet to be fully comprehended.

Isaias is from Ethiopia and graduated from the University of Bristol Medical School. He is president and co-founder of the Christiana Institute of Advanced Surgery and a practicing surgeon in the US.