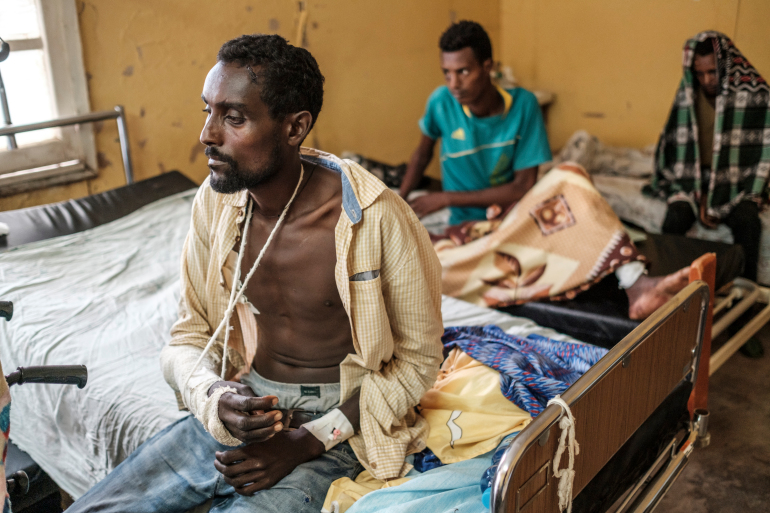 At a time when the country is confronting increasing atrocities, the five-year plan offers slim hope of resolution and accountability.

In his acceptance speech on 2 April 2018, Abiy Ahmed, Ethiopia’s new prime minister, expressed his intention to bring tectonic changes. And, indeed, Ethiopia has undergone unprecedented political and legal changes since then.

However, the reform hope has also faced considerable setbacks. For instance, the government has failed to reveal the fate of disappeared university students, relocate and compensate displaced people, and address the serious issue of rising atrocity crimes.

The United Nations lists atrocity crimes under three main categories: genocide, crimes against humanity, and war crimes. These are regarded as international crimes, based on the idea that the acts associated with them affect the whole of humanity.

The UN framework also offers risk factors to determine whether atrocity crimes are committed.  For the purposes of this article, I’ll address just three risks that are especially relevant to Ethiopia’s case.

The second risk factor is a record of serious violations of international human rights and humanitarian law. As reports highlighted, Ethiopia has had grave breaches of laws and customs of war—today, and in the past. For example, the Ethiopian government has been accused of serious breaches in human rights such as torture, enforced disappearances, extra-judicial killings, crimes against humanity, and human rights abuses.

The third risk factor of concern is the weakness of state structures. In Ethiopia, there is a weak and disjointed security apparatus, an absence of robust institutions, a culture of impunity, and a lack of accountability for human rights violations.

In late June 2020, for example, Ethiopia was rocked by an unprecedented rise of violence and ethnic-based attacks following the murder of prominent Oromo singer Hachalu Hundessa. According to the Ethiopian Human Rights Council, several atrocity crimes were committed as a result of hate-based violence—including, notably, crimes against Amhara and other minorities in the Oromia region. Reports show 123 civilians were killed; out of these, 76 of them were killed by lethal force use of security in Oromia. Despite the government’s claims that it has arrested 9,000 people and that 4, 000 people are being prosecuted, these exceptional crimes were committed partly owing to the weakness of Ethiopia’s security apparatus.

In addition to risk factors, the existence of atrocity crimes in the country has triggers that are unique to Ethiopia. There are at least four underlying causes that I consider as the basis for Ethiopia’s exceptional atrocity crimes.

Arguably, ethnic governance is a recipe for atrocity crimes, and ethnic federalism is the original sin liable for the country’s pandemonium. The narrative of ethnic difference and division is entrenched and sowed in the society. Some regional constitutions—like the Benishangul-Gumuz constitution and Harari constitution —go as far as incorporating clauses stating that some ethnic groups are ‘native’ while others are ‘settler.’

The causes and consequences of these types of categorical divisions have been discussed at length in academia. Professor Mahmood Mamdani famously argued that a ‘native’ versus ‘settler’ dichotomy is rooted in colonialism; it places some groups as permanent minorities via the politicization of identity. Inevitably, Mamdani says, these divisions lead to violence.

Discussing Ethiopia in particular, Professor Adeno Addis observed that the Ethiopian constitution makes certain citizens  ‘strangers’ in their own country. It frames some ethnic groups as active political participants, while others are relegated to the role of political bystanders.

Ultimately, ethnic federalism gives rise to the over-politicization of ethnicity, where ethnic groups tend to claim exclusive ownership of resources, privileges, and entitlements in their respective regions. The establishment of ‘us’ versus ‘them’ narratives has intensified and fuelled hate-speech—resulting in social fissure and resentment in the country.

For example, on 12 January 2021, at least 82 civilians—including women and children—were brutally massacred in ethnic-based attacks in the Metekel zone of the Benishangul-Gumuz region, according to a report by the Ethiopian Human Rights Council.

The human rights and humanitarian causalities of the ongoing war in Tigray are not yet fully reported. Following the armed confrontation between Ethiopian National Defence Force (ENDF) and TPLF, a paramilitary wing of TPLF named ‘Samri’ gruesomely massacred at least 600 (mainly Amhara) civilians in Mai’kadra.

Unfortunately, that was only the beginning. It is now clear that there is a serious humanitarian crisis in the Tigray region characterized by food shortages, widespread looting, rape, and sexual violence. Tigrayans have also cited being ethnically profiled at workplaces and airport security checks, according to the Ethiopian Human Rights Commission. The recent reports of Amnesty International and Human Rights Watch show that “serious human rights abuses that may amount to war crimes and crimes against humanity were committed by Eritrean forces with support from federal troops in Axum.”

A conflict between Konso and Ale communities over territorial claims in November 2020 resulted in serious human rights abuses including the killing of at least 66 people, property destruction, and displacement of tens of thousands of people.

Given the unfolding precarious situation, it is quite difficult to confirm the perpetrators. However, governmental authorities indicated that former members of the Ethiopian National Defence Force (ENDF) and members of the regional police force who defected their units masterminded the violence. On 9 January 2021, a renewed attack took place in Konso, and at least nine civilians were killed by armed non-state actors.

Statehood questions in the southern region is another ground for the rise of atrocity crimes. The Sidama and Wolayta demands are cases in points.

In each of these cases, and in countless more, it is clear that a dispute over boundaries—and an inability to resolve the disputes—is leading to mass atrocities, without a clear path forward to regional stability and peace.

Yet another underlying factor for the pervasive atrocity crimes in Ethiopia is an absence of collective empathy among people and the government. Instead, there is a growing trend of selective condemnation, where citizens are prone to accept ethnically-biased accounts and interpretations of events—or incomplete official explanations—rather than condemn atrocities crimes at all times, and irrespective of the perpetrators’ identities.

The Ethiopian National Human Rights Action Plan (NHRAP) is a five-year roadmap that guides the government towards the realization of human rights. It also acts as a touchstone for assessing the country’s performance in the area of human rights, in alignment with international standards.

Despite socio-economic rights being a minimum core obligation to the government, the plan gives high priority to civil and political rights, as well as the rights of vulnerable groups, such as women, children, persons with disabilities, and refugees.

The plan also posits the need for human rights education nationally in the coming five years. This is set with the understanding that awareness precedes action when it comes to the execution of human rights.

Importantly, chapter 3.2 also calls for the government to consider signing one of the following international treaties that Ethiopia is not currently subject to:

The need to go further

One of the major flaws of the current National Human Rights Action Plan is the absence of a detailed strategy to address atrocity crimes.

To show serious consideration for the atrocities that have been committed across the country, the government should also consider signing the Rome Statute conferring jurisdiction to the International Criminal Court (ICC).

Moreover, the plan shortfalls a stipulation on whether Ethiopia will accede to the First Optional Protocol to the International Covenant on Civil and Political Rights (ICCPR). This protocol mandates the UN Human Rights Committee to receive complaints on civil and political rights.

Regarding domestication of human rights, the Ethiopian government needs to show commitment by ratifying the Protocol that grants jurisdiction to the African Court on Human and Peoples’ Rights. At a sub-regional level, the government should also consider acceding to the Treaty for the Establishment of the East African Community, which enables individuals to file human rights cases before the East African Court of Justice (EACJ). This would show additional commitment and would mean Ethiopia accepting the acquis communautaire (community norms) of East African Economic Community. The government would be bounded by regionally and internationally recognized human rights laws and procedures, and this would further solidify accessions to human rights treaties.

The lack of commitment to enforce civil and political rights at the international level echoes that the incumbent administration—much like its predecessors—fears international scrutiny. Without conceding involvement from the UN treaty bodies or monitoring organs, there are restricted gateways for individuals to challenge certain governmental actions such as harassment of journalists or internet shutdowns.

It is promising that part 4.3 of the plan emphasizes bail reform as an area that the government should improve. However, procedural rights such as habeas corpus, bail, the presumption of innocence, and the likes must also be respected in practice. The case of Lidetu Ayalew is just one where judicial injustice is stark.

There are also various other instances where law enforcement officials have flouted individuals’ rights to bail. Until there is equal justice in the legal system, it will be impossible to protect individual freedom let alone address atrocity crimes, which are often perpetrated by powerful actors with relative impunity.

As it stands now, the Ethiopian Human Rights Action Plan seems a feeble bulwark against atrocity crimes in the country.

Atrocities—including grave crimes against humanity—appear to be increasing, not decreasing in Ethiopia. Ethnic divisions, civil war, land disputes, and selective civilian empathy all amount to exceptional risk. Unless the deep political disagreements are dealt with in a serious manner and a move towards political reconciliation is initiated, an action plan to respond to human rights will, unfortunately, always remain multiple atrocities-behind. It’s like putting a bandage on a spreading internal disease.

Moreover, while the reform and reconciliation steps of the government are commendable, these steps should not blot out accountability for serious violations committed in the past three years and still continuing. Perpetrators of atrocities—including high officials and law enforcement officers themselves—must be held equally responsible for human rights abuses.

This is to say that, if the Ethiopian government is prepared to take human rights seriously, then it must also be willing to engage seriously with the risk factors and roots of crimes against humanity. Accordingly, the government must work towards political negotiation and reconciliation, dealing with historical grievances of various communities, and finding ways to make ethnicity less salient in our politics.

Main photo: A survivor of the Mai-Kadra massacre recovering at the Gondar University Hospital; 20 November, 2020; AFP.

Yohannes is a PhD candidate at Monash University Faculty of Law, Melbourne, Australia. He is a Lecturer in Law at Bahir Dar University (currently on study leave). Follow him on Twitter @yeayalew