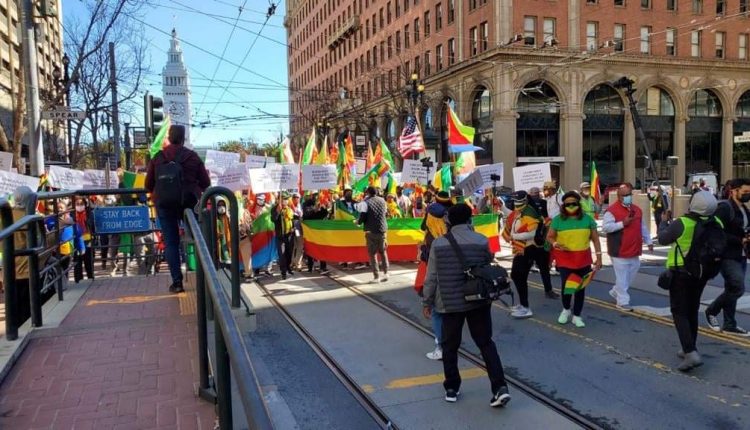 The uncritical support many Ethiopians display for the brutal war in Tigray will deepen the estrangement of Tigrayans from their country.

Since November 2020, Ethiopian citizens of the regional state of Tigray have been targeted in an utterly reckless and unspeakably brutal war.

The war against Tigray is waged by an alliance of three: the Ethiopian National Defense Force (ENDF), the militia of the Amhara regional state, and the defense forces of Eritrea. Despite censorship of the Ethiopian press and, until late, a complete blackout of news coverage from Tigray, there is ample, reliable information gathered by reputable international news agencies, human rights and humanitarian bodies, and the international diplomatic community.

There is, therefore, no disagreement in the international community over the recklessness or savagery of the war.

The Ethiopian government’s pronouncements on the war, when not deliberately false, are ridden with Orwellian duplicity. The official motive for the war is to enforce law and order in the region. Even if this is granted, it is far from obvious how flagrantly lawless action and outright war crimes can promote the rule of law.

In his speech to Parliament on 23 March, the Prime Minister went so far as to defend the continued presence of Eritrean troops in Tigray in light of what he described as Eritrea’s pressing national security interest, implying that this foreign interest somehow trumps Ethiopia’s sovereign interest in its territorial integrity.

Nor is it clear what national Eritrean security interest is at stake. Does it, for example, include the crime of destroying Eritrean refugee camps in Tigray or forcibly returning refugees to Eritrea?

What is more, the foreign power deployed to assist the Ethiopian defense forces is one that harbors not mere ill will, but deeply vengeful attitudes towards Tigray on account of Tigrayan political and military leadership during the Ethio-Eritrean war of 1999-2000, where Eritrea suffered complete defeat. (It is surely paradoxical that the State of Eritrea feels that the Tigray population was too loyal to Ethiopia in the previous war whereas the Ethiopian government feels that this same population is not sufficiently loyal to Ethiopia.)

To allow a state that is notoriously tyrannical to its own citizens a free hand to perpetrate aggression against a population which it deems a mortal enemy is a deplorable betrayal of the Ethiopian state’s obligation to protect its own citizens. Similarly, the Amhara militia mobilized to join the war has long borne resentment towards Tigray due to territorial claims of the Amhara region against its neighbor and for TPLF’s role in side-lining the long-dominant Amhara from the political decision-making.

Thus, the Ethiopian government’s willingness to deploy Eritrean and Amhara forces in a war against Tigray amounts to a decision that the fate of Tigrayans be left to their worst foreign and domestic enemies. Leaving their fate to their worst enemies cannot possibly be a promising way of winning the hearts and minds of Tigrayans.

The Ethiopian commander in chief presiding over the carnage in Tigray is a Nobel peace laureate. It somehow escaped notice that what was sold and rewarded as a peace accord between Ethiopia and Eritrea was, in fact, a war pact between the two governments aimed at the submission of the people of Tigray.

The echoes of Orwellian doublespeak, where everything is the exact dark opposite of what its name signifies, were disconcertingly evident even prior to the war. A striking early instance of life imitating fiction was the establishment of the Ministry of Peace—a designation which first appears in Orwell’s 1984—to house Ethiopia’s feared National Intelligence and Security Service (NISS) and Federal Police Commission, both now actively engaged in the war and the harassment of  Tigrayans across the country.

For the international community, there is by now no doubt that innocent Tigrayans were subjected to inhuman actions in the course of this war which violate international and humanitarian law, and have been exposed to man-made hunger.

Without any pretense of offering a complete catalog of crimes committed against the Tirgrayan population, it should never be forgotten that  Tigrayans suffered countless atrocities: flight in the tens of thousands to neighboring states; the internal displacement of a third of the Tigrayan population; widespread summary executions of civilians; the rampant use of rape as a deliberate instrument of war; the looting and deliberate destruction of villages, crops, livestock and vital institutions such as hospitals, clinics, schools, and factories; the looting and wanton destruction of religious shrines and sacred manuscripts in what appears to be a concerted effort to desecrate sites and objects essential to Tigray’s and Ethiopia’s cultural heritage; ethnic cleansing of Tigrayans from territories in Tigray that are contested by the Amhara regional state; the widespread purge of Tigrayans from national institutions such as the civil service and the national army.

Many of these grave misdeeds are entirely unprecedented in previous conflicts between the central government and regions, either under imperial, military, or EPRDF rule.

Against this dark backdrop, it is surely perplexing that non-Tigrayan Ethiopians, with the exception of historically marginalized communities such as the Oromo, are not disquieted by the abhorrent, war-crimes riddled campaign prosecuted in their name. While outsiders have condemned the war—calling for the withdrawal of Eritrean Defense Forces and Amhara militia as well as a cessation of hostilities and the initiation of negotiations— many Ethiopians have greeted the slaughter and suffering in Tigray with acquiescence or active complicity in the form of a consistent readiness to deny the savagery.

What explains the non-Tigrayan Ethiopians response which stands in stark contrast with that of the international community, and even that of many Eritreans in the diaspora?

There was certainly much popular discontent with authoritarian rule under EPRDF and with the dominance of TPLF in the ruling coalition — and, by extension, in Ethiopian political life more broadly. Exploiting this discontent, the current Ethiopian government sought to win legitimacy by demonizing and scapegoating TPLF and its Tigrayan supporters.

They were held solely responsible not just for all the wrongs of EPRDF, thereby whitewashing the role of the other constituent parties of the ruling coalition in which the present leadership is rooted, but also for the many conflicts that erupted across the country under the current government’s watch.

Yet, the blames assigned to TPLF, even if warranted, cannot possibly explain away the evils visited upon ordinary citizens of Tigray. How can anyone uphold the scorched-earth policy as a punishment deserved by Ethiopian citizens of Tigray? Regardless of the explanation one proffers, the denial or tolerance of barbaric practices of the allied forces against Tigrayans is, and will remain, an unforgettable moral disgrace.

Beyond the novelty of crimes perpetrated by the present Ethiopian state and its allies, the popular support of military action against the people of Tigray is unprecedented in previous conflicts between the central government and regions. Accordingly, the possibility of a permanent severance of ties between peoples is particularly concerning.

Mere state violence and repression against ethnic communities are not uncommon in our history and it leaves room for gradual healing and reconciliation. In contrast, popularly sanctioned violence against any ethnic population rarely allows for healing and invites separation. Herein lies the explanation for why many Tigrayans have come to regard the prospect of eventual unification with (post-Isaias) Eritrea far more promising than continued membership in the Ethiopian state.

The brutality and scope of the violence inflicted by the Eritrean Defense Forces is said to exceed that perpetrated by either the federal military or Amhara militia. The critical difference here lies in the divergent responses to the war by the Eritrean and Ethiopian public—condemnation by the former and sweeping endorsement by the latter.

Consumed by blind hate, many Ethiopians lamentably forget that their hostility to Tigrayans jeopardizes what undoubtedly matters to them and to all of us: the survival of the Ethiopian political community. History will surely remember how Ethiopian citizens sacrificed the honor and resilience of their country for transient and unlovely passions of resentment and revenge.

We Ethiopians should feel deep shame and outrage over the war unleashed against our fellow citizens. We must stand in solidarity with the ordinary people of Tigray during this hour when their very survival is at stake. A failure on our part to demonstrate our support for the innocent victims of the war risks the loss of both of our moral standing as a nation as well as Tigrayans’ sense of belonging to the Ethiopian state.

Unless these losses are readily avoided, the survival of a meaningful Ethiopian political community will be seriously in question.

Astonishingly, in close succession to the Prime Minister’s 23 March admission of Eritrean troops’ presence in Tigray, on 26 March, the Prime Minister announced, on Twitter, in a peculiarly deferential tone, that the Eritrean government has agreed to withdraw its forces from Tigray. If true, this is certainly a welcome turn of events.

However welcome, this most recent announcement by the Prime Minister raises vexing questions: How can the withdrawal be independently verified? What independent body will monitor the situation on the ground in order to assure that Eritrean troops will not return to Tigray?

The announcement by the Prime Minister also declares that the border between Eritrea and Ethiopia will be safeguarded by Ethiopian defense forces. However, nothing is said about who provides the authoritative demarcation of the border.

Finally, the announcement of the withdrawal makes no mention of cessation of hostilities or arrangements towards lasting peace, including the matter of bringing perpetrators of grave war crimes to justice.