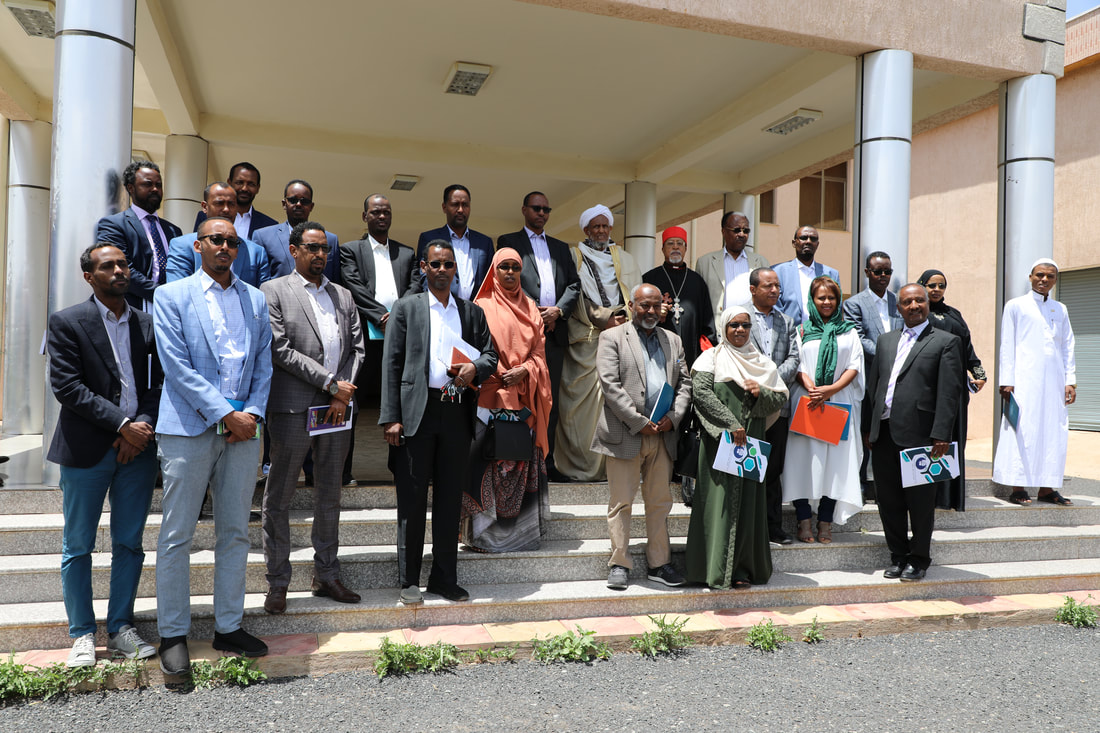 Inclusive dialogue that leads to national reconciliation is a prerequisite for peacebuilding and social healing in Ethiopia.

As emergency relief organizations begin much-needed humanitarian operations in Tigray, the government is busy putting in place the processes for the elections in June.

Despite concerns about whether the security situation will allow the elections to take place, this is an appropriate time to consider how the contesting political parties, as well as development institutions and organizations, foresee post-crisis, post-conflict, and peacebuilding scenarios.

It is now almost five months since the series of events fueled armed intervention in Tigray in November.

The government remains committed to conducting the elections, while juggling a number of challenges and a reform agenda initiated under a new prime minister, all subsequently exacerbated by the COVID-19 situation, major locust invasions, drought, floods, internal displacement, land disputes, and the fallout from the Tigray crisis.

With relief operations getting underway, and evidence finally emerging on what violations took place and by whom, another major challenge will be the way in which these are addressed and how responsibilities and accountabilities are managed.

This will have an impact on an already volatile political landscape.

Above all, as the damage to Tigray is repaired and the region rehabilitated, the nation and all its institutions will have to look deeply and carefully into how to implement longer-term issues of restitution and restoring communal trust and social healing.

In July 2020, the Ethiopian Government and its UN partners launched the Sustainable Development Cooperation Framework for 2020-2025. This plan outlined the support of the international community for the implementation of Ethiopia’s Home-Grown Economic Reform (HGER) and the Ten-Year Pathway to Prosperity Plan (Ten Year 2020-2030 Perspective Development Plan). Encapsulated in these plans are the major goals of:

In current circumstances, the need to safeguard these objectives and integrate peacebuilding and conflict prevention programming into the development process during the next four to eight months, during both pre-and post-election transition processes, is more important than ever. Organizations need to identify strategies to protect programs and investments, be attentive to emerging risks, and focus on serving the people of Ethiopia through the delivery of key services and capacity building of national counterparts.

Implementing a ‘duty of care’ to staff and consultants working within organizations will be especially important to create a safe and harmonious professional workspace where staff from all regions of Ethiopia can work together.

Ethiopia has a long history of national and international organizations working in the development and humanitarian sectors. It also has a large cohort of professionally trained public servants emerging from its many universities as well as those educated abroad. Both private and public sectors have successfully responded to challenges in the past, but the divisions caused by acute ethnic polarization and conflict present complex problems that need to be addressed with sensitivity by management at both the national and headquarters level.

With electoral processes unfolding, there is an urgent need to ensure that ongoing political issues do not divide employees on ethnic, political, or ideological grounds.

Rehabilitation, reconstruction, ‘building back better,’ and other activities related to post-conflict and post-crisis management responses are now standard for development organizations and donors working in contested volatile environments or responding to major crises.

‘Peacebuilding’ has become an ever-widening concept, used by different actors with a variety of meanings and practices. It covers the implementation of strategies to prevent conflict, sustaining economic development, promoting social and political justice, and ensure an equitable society where communities are safeguarded from direct and structural violence.

There is an expanding debate in the academic community over the efficacy of current models and strategies to promote peace, establish good governance, and build resilience and sustainability. This underlines the need to pay attention to diverse livelihood systems in countries like Ethiopia.

Understanding the ways in which crises and conflict have affected the strategies that communities adopt or adapt during crises can provide for the development of more effective and nuanced responses to build resilience as well as target issues of marginality and environmental justice.

Major emergencies and conflicts can seriously affect existing development programs, delay or disrupt ongoing projects, and necessitate fast and flexible changes in budget or program implementation. Elections could lead to a new administration and bring about change in policies and priorities that require the rewriting of previous development and donor partner country agreements.

It is important to understand what models or ideas for ‘peacebuilding’ the government and opposition parties are discussing and what policies they are considering to ‘heal’ the many social, psychological, and physical wounds that the events of the last two years have caused.

These and similar debates are common to many countries, but Ethiopia may be exceptional in that it is perhaps the first country headed by a leader with a Ph.D. in Peacebuilding!

This crisis in Tigray erupted at a time when Ethiopia was at another pivotal moment in its history. A moment where there was hope that space is opening up for the country to explore, recognize, and reconcile issues of history and identity, and to consider new models of governance based on full representation and acceptable distribution of assets and resources.

The narratives and explanations of conflicts and their ramifications will continue to play out during the election process as Ethiopians debate and discuss immediate causes and long-term origins.

Major issues to be faced will be the choice between centralized or decentralized governance systems and the ways to address ethnic and regional imbalances. At the heart of these discussions will be the recognition and responses to ancient rivalries and historical antecedents that have to do with the evolution of the Ethiopian state, including key legacies of language, literacy, religion, and culture, as well as the role of Tigray and its leaders during various epochs of Ethiopian state formation.

These discussions have never been easy. They generate anger, frustration, and pain. Debates among Ethiopian politicians, academics, professionals, and the diaspora have become increasingly polarized around ethnic positions and narratives of past real and constructed injustices. Social media has become saturated with hate speech and vicious ‘othering’ of opponents.

The butchering of innocent children, the rape of women, burning down homes and religious premises, looting cultural treasures, and destroying business premises and other means of livelihood seem to have become normalized as legitimate expressions of protest.

Ethiopians and friends of Ethiopia have been shocked by the outbursts of public animosity and reports of continued tensions and intercommunal violence.

Government and international agencies may indeed be working to address the restoration of destroyed infrastructure and resumption of basic services, but death, trauma, the loss of livelihoods, and lack of protection disrupt family and community relationships, erode trust, and create fear of cyclical retaliation.

The government, recognizing the increase in illegal trafficking of small arms in the country, implemented a gun law in January 2020. It has yet to have much impact on a problem that is perennial, especially in the border areas of the west, eastern, and southern parts of the country.

Another cause of growing concern is the existence of many state and non-state armed militias. This is an area in which both government and opposition parties need to show leadership and identify ways to address the issue of increased militarization and targeted violence against women and minorities.

Pre-existing gender inequalities in Ethiopia make women more vulnerable in conflict and this is already reported to be affecting the electoral process itself. Working for the positive involvement of women in the peacebuilding process needs to acknowledge their agency, as well addressing their needs as victims and as citizens entitled to justice.

While there have been advances at the cabinet-level in the inclusion of women in different high-level positions, what happens at the local level is equally important in tackling the persistent power and economic structures that continue to constrain women’s participation.  A nuanced gendered approach must also recognize the dynamics of the role of men in Ethiopian communities and how socialization and cultural constructs of masculinity are linked to the use of violence.

Similarly, the reporting on abuses and the collection of statements of victims and witnesses of violence must be handled with sensitivity with attention to cultural nuances on what can and cannot be ‘talked about’ to prevent further harm and potential retaliation.

The growth and continuation of ethnic conflict and the concerns over the practice of federalism have led to calls for Ethiopia to open up to a national dialogue, to calm tensions, and to enable communities to come together and mutually agree on a process of re-envisioning and re-imagining a future for themselves.

The four Rs of the peacebuilding process as advocated by agencies such as UNICEF—recognition, redistribution, representation, and reconciliation— provide a framework for the beginning of such a process: ensuring that all levels and segments of a community are truly represented, recognizing the importance of hearing all narratives, grievances, and losses, ensuring fair redistribution of resources and assets based on these losses, and, through this process, working towards national reconciliation.

The Ethiopian Reconciliation Commission which was set up in December 2018 is such an attempt at establishing a framework for addressing past and current concerns.

While laudable, the attempt faces challenges in the context of ongoing conflicts and it could be open to manipulation, the marginalization of participants, and scripted according to a pre-ordained model of national unity. The integration of local forms of ‘transitional justice’ into a peacebuilding process can be fraught with difficulties.

The enormous social changes in Ethiopia over the last 20 years have recalibrated old and generated new inequalities. A new generation has come of age. There are reform and revival movements among the faith communities. There is also a rapid expansion when it comes to education, experience of migration and travel, social media, and other aspects of globalization. These inform an increasingly dynamic cultural and social environment.

Imposing systems of justice that are based on essentially static cultural practices and traditions can lead to the re-imposition of old hierarchies and reassertion of oppressive power structures.

In the next few months, Ethiopians in the country and across the globe will be reviewing their own histories and alternative visions for the future. This is taking place in a context in which COVID-19 has exposed global fragilities and exacerbated specific local vulnerabilities and divisions. These reflections, the election process itself and its outcome, must be conducted in an environment of safety, harmony, civil mindedness, and recognition of shared linkages.

The hopes and aspirations of people to have space to face their own challenges and transcend divisions are shared by outsiders and friends of Ethiopia, even though expressions of care and compassion are sometimes misunderstood, even taken as being ‘anti-Ethiopian.’

It is important to show these expressions of solidarity are based on a common vision, and in these times of climate change, increasing economic insecurity, and the spread of new forms of racism and bigotry, re-envisioning another world is possible.

It is our shared and collective responsibility to work together to make it so.

Angela is a former UNICEF Regional Chief of Emergencies and Director of Save the Children US in Ethiopia. She has over 40 years of research and policy engagement on disaster relief and livelihood issues in Ethiopia.