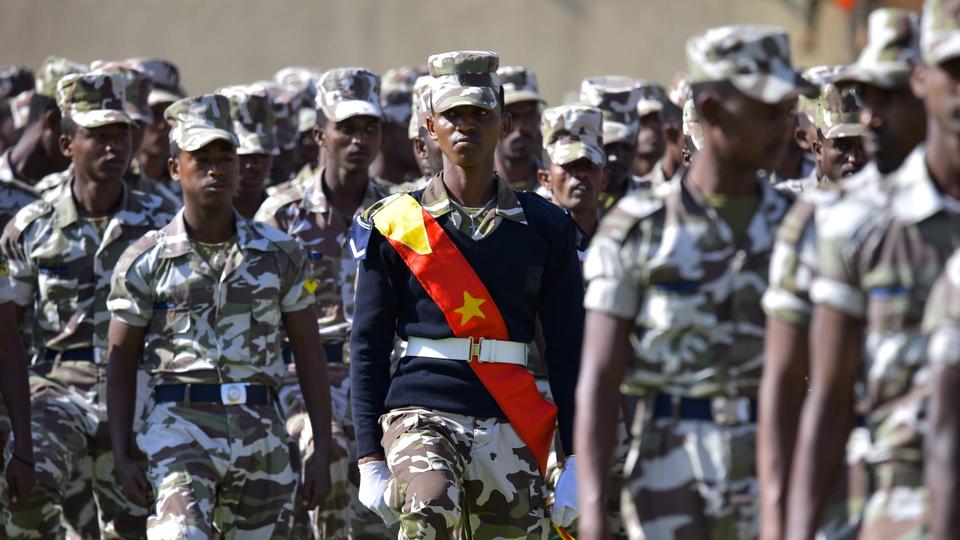 Despite a promise from Abiy Ahmed that Eritrean troops will leave the region, it is likely the war will continue unabated until at least the start of the rainy season in June, and quite possibly beyond.

The dire humanitarian situation is escalating in Tigray, putting 4.5 million people on the brink of starvation. In order to tackle the enormous humanitarian needs, US Secretary of State Antony Blinken demanded a cessation of hostilities and the immediate withdrawal of both Eritrean Defence Forces (EDF) and Amhara regional forces from Tigray.

Apparently, Coons’ visit had some impact on the Nobel peace laureate. In the aftermath, Abiy, for the first time, acknowledged the presence of Eritrean troops in Tigray, as well as recognizing the need for accountability for human rights violations and war crimes.

The Delaware senator cautiously welcomed the admissions but insisted that since “the prime minister has made commitments before and fallen short on delivering,” it is critical that the US stays engaged.

After meeting Coons, Abiy hurried to Asmara to consult with his comrade-in-arms President Isaias Afwerki, and subsequently released a somewhat ambiguous unilateral statement on Eritrean troops’ withdrawal. The statement leaves room for interpretation as the premier claims Eritrean forces are only present along the border in northern Tigray, whilst local and international observers have witnessed Eritrean forces across the region, including in the capital Mekelle.

Furthermore, a statement by the Eritrean Ministry of Information about Abiy’s visit does not mention any agreement on troop withdrawal. Instead, it focuses on the “vicious military attacks” and “disinformation campaigns” against Eritrea and the need to “bolster the joint undertakings by the two sides in the period ahead.” The Eritrean statement indicates an intent to continue the war on Tigray, an interest President Isaias Afwerki has entertained for decades.

In a satellite phone conversation from the battlefield with me, Debretsion Gebremichael, Tigray’s ousted president and the chair of the TPLF, dismissed Abiy’s pledge on Eritrean troops withdrawal as a ploy to dupe the international community and claimed that Tigray Defense Forces’ fight against Eritrean troops on the ground is intensifying.

Debretsion said: “He [Abiy] just wants to buy time because of earlier domestic as well as international pressure of pushing the Eritrean forces out. So finally, he had to show some kind of action. But from the Eritrean side, they have not said anything about it. They will continue. They did not say withdrawal…We are witnessing the opposite on the ground. So, this is just to deceive the international community, to deceive the domestic opposition, to buy time. He uses this to organize more campaigns in different directions in Tigray.”

The war in Tigray has exacerbated the fragility of the Ethiopian regime that has already been increasing as a result of multiple political challenges across the country. The deterioration of the Ethiopian political climate inhibits Abiy to maneuver and act on the pressures of cease-fire and political negotiations by the international community. Accordingly, it is likely that the war will continue.

There are four key areas of concern the Prime Minister needs to consider and balance before caving into any requests for a cease-fire or negotiations.

TPLF spokesperson and Executive Committee member Getachew Reda claimed in a recent telephone conversation with me from the field that the majority of the forces confronted by the TDF are Eritrean troops. “The last weeks, we have been concentrating on fighting the Eritrean troops, instead of killing hundreds of Amhara youths and Southerners,” he said.

Many international media and humanitarian agencies reports’ confirm that EDF dominates in northern Tigray, and that it is also fighting together with Ethiopian troops in Central and Southern Tigray.

Hence, if Eritrean forces are pulled out of Tigray now, it is likely that TDF will soon regain territorial control of much of the region, as the Ethiopian National Defence Forces (ENDF) would not have the capacity to fill the strategic vacuum left by the Eritreans.

ENDF has suffered large-scale losses in Tigray, still has some troops fighting a growing insurgency in Oromia, while concomitantly having re-deployed many army units to the Sudanese border in preparation for a possible escalation of the al-Fashaga border conflict.

The military capacity of ENDF has so far proven to be insufficient to eliminate the TDF insurgency. TDF, on the other hand, is reportedly receiving thousands of young and motivated volunteers every week taking up arms to fight the perceived invaders. Abiy has also recently admitted that his troops are engaged in a difficult guerilla warfare in Tigray.

The rapid advances made by Ethiopian forces in the initial offensive in November is, in retrospect, partly attributed to the efficiency of drones to take out TDF’s artillery and missile defense system; an aerial capacity allegedly contributed to the federal cause by the United Arab Emirates base in Assab, Eritrea.

The Biden administration’s pressure on the UAE to suspend the military activity in Yemen, leading to the decommissioning of the drone base in Assab, was thus a windfall for the Tigray resistance.

As the situation stands, it seems that the ENDF has trouble defending current positions, let alone make advances to eradicate the Tigrayan resistance. Abiy knows this, and in the recent Parliament session he explained that Eritrean officials would agree to pull back their troops “as soon as Ethiopia’s army could control the trenches along the border.”

When, or indeed whether, ENDF would regain that capacity is, however, an open question.

US’s demand for the re-deployment of Amhara region special forces and militia from Western Tigray is also a no-go for Abiy. Amhara regional government has stated that the fertile Tigrayan lowlands belong to the Amhara.

The de facto establishment of ‘Welqait, Tsegede, and Setit-Humera Zone’ of the Amhara region has taken place, as the area is now reportedly fully under Amhara civil administration. The majority of Tegaru inhabitants have been chased out, Tigrinya names eradicated, and assets converted to Amhara ownership.

Abiy is in no position to confront the Amhara political elite on this issue, as he is dependent upon their support to stay in power. Brought to the premiership by the Qeerroo movement on an Oromo nationalist ticket, Abiy soon deserted his ethnic base and shifted to an Ethiopian nationalist stance.

Aiming to recentralize political power under a reformed federal system, Abiy’s vision conflates with some Amhara nationalists’ interests. The solid Amhara nationalist elite backing of Abiy will last as long as he is playing their tune; if he tries to change the melody, he may no longer be wanted as their conductor.

The incumbent Prosperity Party is facing its first election in early June, as the constitutionally prescribed election for 2020 was suspended due to the COVID-19 pandemic. However, the governing party is ridden with internal conflicts, where the regional chapters and various factions are at loggerheads over, inter alia, inter-regional territorial disputes and policy issues.

The open rift between Tigray PP and Amhara PP on the claims of Western Tigray, as well as the flare-up of conflict between Amhara and Oromo forces in Wollo, are of immediate concern.  Having on paper dissolved ‘democratic centralism’, which kept opponents at bay during the Ethiopian Peoples’ Revolutionary Democratic Front (EPRDF) era, chairperson Abiy Ahmed needs to accommodate and balance the interests of the different factions to keep the party from unraveling before the elections.

Finally, the brewing border conflict with Sudan can be viewed as the nexus of the multi-faceted crisis confronting Abiy. A key conflict driver is Amhara claims to territories which Khartoum claims are Sudanese according to the 1902 border treaty. If Abiy accepts the Amhara claims to these territories, in order to maintain the support of the Amhara elite, Sudan may likely counter by offering support to the TDF struggle in Tigray.

Eritrean forces are also deployed to the al-Fashaga triangle, according to the UN, creating an even more delicate situation for Abiy to handle. Mixed up in this pot is the Grand Ethiopian Renaissance Dam controversy, where Egypt and Sudan stand together against Ethiopian demands to fill the dam on a schedule to its own liking–which may again give Egypt an incentive to support the armed insurgencies in Benishangul-Gumuz and Oromia regions.

Thus, the Tigray war has the potential to spill over into the Sudan-Ethiopia border controversy.

Spring is the traditional Ethiopian warring season. Old scores need to be settled or new terrain gained before the main rainy season starts in June preventing the large-scale movement of armies and supplies. It is worth remembering that the last main offensive of EPRDF to topple the Derg military junta in 1991 ended on 24 May, and the final Ethiopian offensive to push out Eritrean forces in 2000 started in late May.

Speaking from the field, Debretsion said they are preparing to counter the ENDF/EDF offensives to be launched soon and had no hope for a quick resolution to the war. And to accede to Abiy’s call for surrender is unthinkable:

The next two months will thus be crucial for all belligerents to undertake offensives in order to regain as much terrain as possible before the rains largely freeze the military positions for around three months.

Therefore, the US should focus on the upcoming rainy season as the window of opportunity to seek out a negotiation process for the conflict. This gives the soon-to-be confirmed US Special Envoy to the Horn of Africa, Jeffrey Feltman, a couple of months to prepare for this critical task.

Kjetil is professor of peace and conflict studies and Research Director of International Studies at Bjørknes University College, Oslo. He has been researching and publishing on politics, conflicts, and human rights in Ethiopia and Eritrea since the late 1980s.