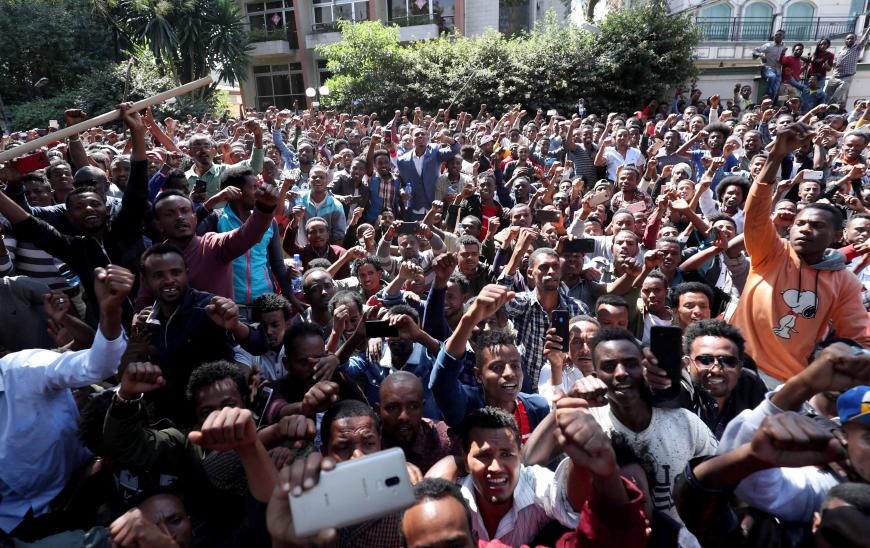 Co-option and ego-driven ideological splits help explain why renewed Oromo discontent is not leading to a resurgent uprising.

Many expected a revitalized Oromo uprising from the qeerroo youth movement after the arrest of the prominent Oromo opposition leaders including Jawar Mohammed and Bekele Gerba in June last year.

However, that has not happened. Why?

Bucking expectations, the qeerroo movement is now fragmented and weak. There are seven major factors why we are not seeing concerted opposition activity, despite the sense of betrayal many Oromos possess about the Prime Minister.

The egocentric disagreement over the meaning of qeerro and its ownership is one of the key factors behind the disintegration of the movement. In Oromiffa, the word ‘qeerroo’ means an unmarried young man. Its female equivalent is ‘qarree’.

From the perspective of political movement, the term symbolizes the Oromo youth’s struggle for political freedom. It refers to the youth who sacrifice themselves for the Oromo cause.

In the political scene, the term was first applied in April 2011 by a youth organization named Qeerroo Bilisummaa Oromoo (QBO) (‘Youth for Oromia’s Freedom’). Inspired by the Arab Spring, the Oromo youth from all over the world formed the National Youth Movement for Freedom and Democracy (NYMFD) towards a coordinated civil disobedience movement. Before April 2011, there was no movement or organization by the term ‘qeerroo’.

The disagreement and rivalry over taking the credit for creating qeerroo is mainly between Oromo Liberation Front (OLF) and Jawar.

OLF argues the QBO was founded in the evolution of the Oromo students’ prolonged struggle to overthrow the TPLF-dominated EPRDF regime. This struggle was under the umbrella of OLF. So, OLF is the founder of QBO.

There is also another group that claims the qeerroo movement was just a spontaneous uprising with no clear structure and long-term objectives. They say it was just an unplanned movement motivated by the outrage over land grabbing and eviction of farmers.

These disagreements among the political elite in taking credit, and in defining the movement itself, have contributed a lot to the weakening of qeerroo. Their insincerity and ego reveal themselves when they try to hijack the victory achieved by the movement.

The second factor behind the disintegration of the qeerroo movement is the tension between OLF and Jawar.

In 2009, Jawar published an article titled “The failure to deliver: the journey of Oromo Liberation Front in the last two decades.”

This piece led Jawar and OLF into a major confrontation. It was perceived negatively by many Oromos that are strongly attached to OLF. To lots of Oromos, OLF is not simply a political organization, but an embodiment of the centuries-long Oromo struggle.  The article created division between the faction of qeerroo that supports OLF and the other faction that supports Jawar.  The division was intensified when Jawar took the role of convincing the OLF army to disarm itself, which was portrayed as him acting on the behalf of the Ethiopian state.

In the 2015-18 uprising, Lemma Megersa had popular support. In fact, it was ‘Team Lemma’ that the Oromo youth knew more than Abiy Ahmed. Today, there are some who still hope for the return of the once-popular qeerroo movement that was supported by ‘Team Lemma.’  They think Abiy has betrayed Lemma and the Oromo cause that Lemma stood for.

People in this faction are still hopeful that Lemma will return to the political arena and rescue the Oromo struggle. The hope is that Lemma and his allies will come up with a tactic to sideline Abiy and his regime, just like they did to TPLF.  Qeerroos in this category are reluctant neither to oppose nor to support the authorities.

The co-option which was aimed at weakening the qeerroo movement was made in all parts of Oromia. For instance, more than half of the cabinet posts in Ginchi are now composed of individuals who previously identified themselves as ‘qeerroo’.

These individuals are not true qeerroo. They are self-centered opportunists who were previously unemployed individuals. These are individuals who won’t hesitate to kill their close friends and relatives if there is something to be gained from such acts.

By organizing five to ten qeerroos under small enterprises and giving them a 200,000 birr loan, the Ginchi administration invested a lot to manipulate the members and weaken the movement.

The authorities in Ginchi created division and enmity between the qeerroo groups in the town by giving the town’s old bus station to one group and the new station to the other. Bus stations are a source of income for many, and this is an easy way to create friction. In 2020, there was a fight between the two groups.

Another instance of co-option was following the qeerroo protest a year and a half ago in Ambo. After a discussion with Takele Uma, the then-mayor of Addis Abeba, the leaders of the protest were given two-bedroom condominium houses near Addis Ababa.

There are factions of qeerroo that have given up on peaceful struggle. These violent groups believe that the current regime can only be overthrown through armed struggle. They are now supporting ‘Jaal Marro’ and his Oromo Liberation Army (OLA).

Some qeerroo elements are planning to make a parallel movement with the OLA. It seems as though they are waiting for the right moment to act, and they feel like they have an advantage over the government as the government is fighting in different battles—Tigray, Sudan, Metekel, Wellega, Wollo. The increasing international pressure on the federal government is also something that they think they can use to their advantage.

Despite the facts on the ground, those who belong to this category believe that Abiy is the answer all the Oromo questions they have been fighting for. They hate those who oppose Abiy and argue that the Oromo opposition parties are against him not because they care about the Oromo, but, instead, for the sake of political power and influence.

Similarly, protestant qeerroos and qaarrees support him because Abiy is a protestant Christian. This particularly true of women. Plenty of churches preach that we should stand by him and support him as he is from God. They also say that Abiy’s opponents attack and undermine him because of his Christian faith.

Other qeerroos are worn out by the endless protests. Frustrated by the perceived betrayal of the Prime Minister, they have given up on political participation.

The coming election will not bring anything new either. Many Oromo youths have already lost hope in the elections due to the imprisonment of members and leaders of Oromo opposition parties such as OLF and Oromo Federalist Congress.

The future, therefore, is uncertain: qeerroo have been very patient with Abiy and the ruling party, but you never know when and where the qeerroo movement will resume again. One thing we can be sure about is that, given the level of discontent, the qeerroo movement is like a dormant volcano.

The author lives in Ginchi and requested anonymity for fear of persecution by rivals or the authorities.

Main photo: Oromo youth (qeerroo) gathering outside Jawar Mohammed’s house during the tension that occurred after he claimed security forces attempted to remove his security guards in the middle of the night; 23 October 2019; Reuters