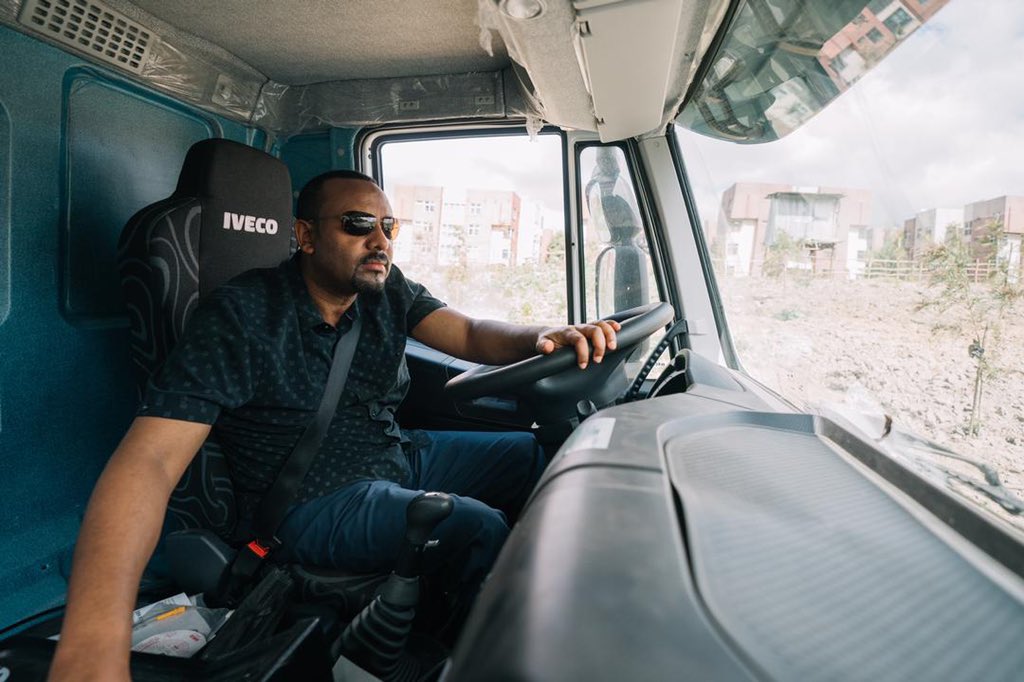 The Prime Minister’s narcissism could doom the country.

Most revolutions removed oppressive systems only for them to be replaced by similar, if not worse, regimes led by the same liberators.

But, who are these leaders of revolutions that fight to get rid of repressive systems and become oppressors themselves? How can we understand them and their decision-making?

Psychoanalysis is one way of understanding them. We can analyze their behavior as humans, understand their decision-making processes, and anticipate their next move.

Decades of research into human psychology has revealed multiple personality traits that are commonly found in leaders. However, I will focus on just one, the grandiose narcissistic leader, as it perfectly fits Ethiopian Prime Minister Abiy Ahmed.

According to Robert Greene, grandiose narcissists possess moderate capabilities, lots of assertive energy, and can rise to powerful positions. Their boldness and confidence draw enormous amounts of attention and gives them a larger-than-life presence. We often fail to see the underlying irrationalities in their decision-making process and so follow them into tragedies.

The grandiose are contingent on the attention we give them. Without public adoration, their inflated self-worth is not validated. They are overconfident, skeptical of experts, and, most importantly, impulsive decision-makers.

Greene stresses that grandiose narcissists can give the impression that they were divinely ordained for greatness. They retell stories of their youth that display their distinctiveness, as if their fate was predetermined.

Narcissism can also stem from parents overvaluing their children at a developmental stage. This is sometimes created by an unhealthy mother-son relationship. Some mothers idealize their male offspring as if they are chosen for greatness and put them on pedestals so high that the child is unable to remain balanced.

We can see this in Abiy. We have all heard the stories about how he was destined for greatness since he was seven and how the relationship with his mother was central to this.

Grandiose narcissists also have tales from earlier in their lives in which they overcame impossible odds. These may not necessarily be complete truths nor fabrications, but versions of actual incidents that they want us to know about.

Again, this is another distinctive side to Abiy, who has shared tales of how he was the only survivor from the Ethio-Eritrean war when his division was hit, and other stories where he narrowly avoided death.

Greene shows that for the grandiose narcissist to win over the public’s adoration, “It is absolutely essential to present themselves to the public as highly representative of the average man.”

Even though they live a privileged life, they try to look ordinary by engaging in the theatrics of mingling with ordinary people. This is typical of Abiy, whether he’s out driving at night, playing in the fields at parks, planting trees, or eating with and serving ordinary people, as he actually did recently during a Fasika celebration at Unity Park, a pet project of his.

The grandiose narcissist, according to Greene, “often rise to power in times of trouble and crisis”. They act as a savior and their confidence is reassuring.

In order to achieve that perception, they make big but vague promises. Their message is simple to digest, reducible to a slogan, and stirs public emotion. In our case, the message was unity and the slogan, ‘Medemer’.

Abiy, just like Greene’s prediction, rose to power in a time of crisis and his boldness made millions believe that he had the panacea for all the country’s problems.

He made bold promises when he came to power. He vowed to launch a digital platform where citizens could follow up on government work with transparency and accountability. Freedom of expression and media rights were to be guaranteed, constitutional rights of citizens respected, and arrests made only following obtaining concrete evidence.

Even if Abiy intended to implement all these, which I highly doubt, we didn’t question their practicality. In that phase of adoration, even the best of us abandoned our rationality and pretty much believed everything he said.

The grandiose often rely on intuition, disregarding the need for expert opinion or scientific feedback. As Maccoby succinctly puts it, they are not interested in analytically seeing the future, rather in creating it.

They create the myth that their hunches have led to fantastic success. Upon closer inspection, however, their hunches miss as often as they hit. “narcissistic leaders – even the most productive of them – can self-distract and lead their organizations terribly astray,” Maccoby says.

Related to this is the belief that they can easily transfer their skills; a car mechanic can be a print technician; a bus driver can become a machine operator, and so on.

Although not acting in his area of expertise, Abiy tried to show us that his touches are magical. He is not a medical doctor but criticizes medical professionals; he is not an architect but he leads documentaries on architectural aesthetics; he is the policeman, the army general, and everything in between.

Grandiose narcissists are also huge risk-takers. This is what attracts attention towards them initially. Combined with their occasional success, they seem larger than life.

Boldness and vision are essential to transform a country, but the boldness of the grandiose lacks control. They cannot stop or pause because that would cause a lapse in publicity as justified by Greene. The grandiose “must take actions that create a splash in order to keep the attention coming that feeds their high self-opinion.”

They are always working, on Sundays or holidays, and members of their cult usually misconstrue this as act of selflessness and love for their country, when it is a pure lack of control.

As a huge risk-taker, Abiy associates himself with gigantic projects. We can see this through the Gebeta Lehager, Meskel Square, and Legehar Projects.

But Abiy only cares about the size and not the impact of these projects. How important is a park that less than one percent of the population will be able to access that he personally oversee its construction? It’s all about optics and attracting attention.

As a grandiose narcissist, Abiy’s lack of control can also be seen in his expeditions. He cannot stop, pause, or rest as the attention from constantly being seen becomes a drug.

There is another critical trait of the grandiose narcissist, one that can give us insight into what is currently happening in Ethiopia. The grandiose narcissist always shifts blame. In Greene’s words, “these types require scapegoats to tighten the group identification.” It is essential that they find scapegoats, often elites or outsiders, regardless of guilt.

Adept at playing the public’s emotion, they construct a common enemy depicted as the source of pain and injustice each person in the crowd has ever experienced. A reform movement begins to develop around the detestation of these scapegoats.

The leader’s promise to bring these enemies down exponentially increases their power and popularity. They create a cult rather than a political movement. Names, slogans, and images are reproduced in large numbers and they assume a godlike omnipresence.

Abiy, imperative to his personality, needed a gigantic scapegoat. Luckily, he found the perfect one in the Tigray People’s Liberation Front (TPLF). There was no need to fabricate a story: the TPLF had been partly responsible for abuses and injustice for decades.

His first step was disassociation. He propagated the notion that TPLF, and not the Ethiopian People’s Revolutionary Democratic Front (EPRDF), the ruling coalition, had single-handedly run the country for the past 27 years. Though true to some degree, the other three parties in the coalition had played a big role.

Abiy and his allies belittled themselves to mere puppets, who had their strings pulled by the TPLF all along. By doing so, they managed to appeal to the general public that they, too, were victims of this ‘malicious cancer’ that had plagued Ethiopia for 27 years, when, in reality, they were beneficiaries.

If indeed TPLF was a cancer, then why are former members of the party, such as Zadig Abraha, still in Prosperity Party’s inner circle? Their answer, shifting blame, yet again, is that it is not the party rather a few people at the top. But so long as you bow to the king, you are bound to live with impunity.

This is not about serving justice, but gaining popularity among victims of decades of oppression, and, as a result, consolidating power. We see banners and billboards with Abiy’s pictures and slogans, portraying him to be the champion of the common people.

Unsurprisingly, Abiy’s popularity has begun to decline. This is mostly because people have begun to see through his deceits. What is scary for Ethiopians, however, is not the decline of his popularity but his reaction to it. As for grandiose narcissists, perceived threats can trigger rage.

The main problem with the grandiose narcissist is their reaction to losing popularity.

They feed on the attention we give them, and so act impulsively, irrationally, and without empathy for others upon losing it. Add firepower to that and you will witness disasters.

This is what should scare us more than the collective ignorance of facts, ethnocentrism, misinformation campaigns, or internal and external enemies (real or invented) that have accompanied it.

Perhaps, Abiy’s impulsiveness is what led him to associate himself with a world-renowned murderous dictator. How can anyone expect President Isaias Afwerki, who crippled Eritrea into an almost failed state, to fix Ethiopia’s complex problems?

Or can it be that Abiy didn’t have faith in the Ethiopian military? What possible other explanations can any of his goons give?

If things blow up with Isaias, expect a war with Eritrea. This is not because Eritrea encroached on our sovereignty but because Isaias will be the next scapegoat, as Abiy cannot be seen as having made a mistake.

If, by some miracle, he manages to steer clear of what is coming, we will have witnessed the rise of a dictator right before our eyes.

But win, lose, or draw, Ethiopia will never be the same again.

Our problems will not die with the TPLF, assuming that the TPLF is indeed dead. As disagreements between dominant groups in Prosperity Party intensify, as Tigray gets pushed to a pariah region, and as an already questionable election nears, Ethiopia’s troubles are far from over.

This is what is scary.

Abiy’s cult members, the herd infatuated with the good doctor, or the ones blinded by their hate for the TPLF (and fear in some case), will try to scorn me for saying anything negative about their messiah.

But if Abiy turns out to be worse than Stalin or Hitler, remember, there are people who still believe that both were great leaders.

The author requested anonymity as they feared they could face negative repercussions for expressing their views.