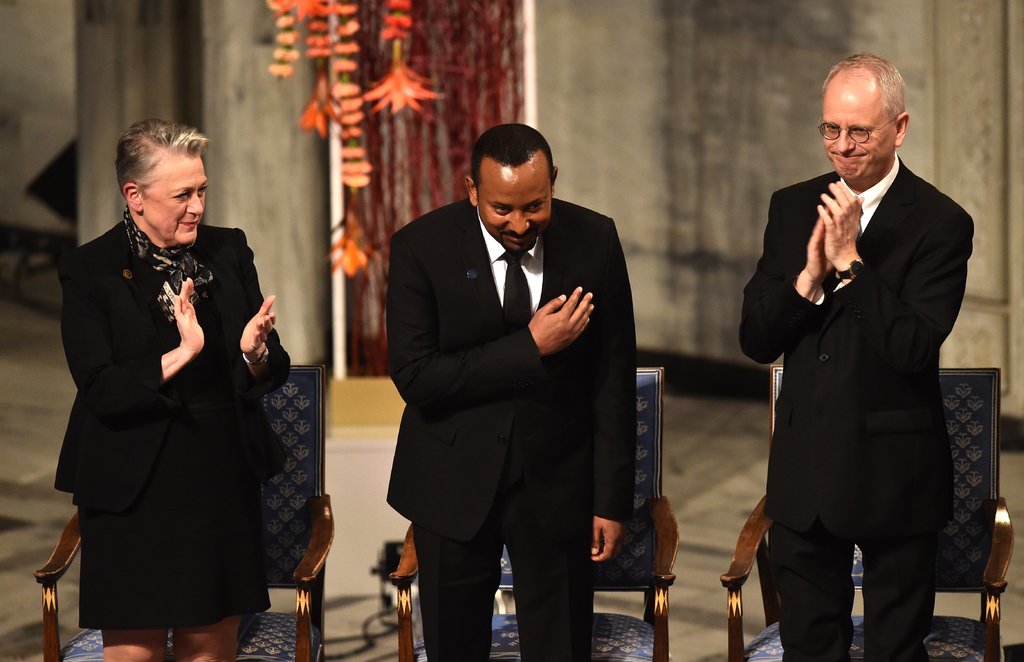 The Nobel committee should revoke the honor from Prime Minister Abiy Ahmed and speak out about the atrocities in Tigray.

When the Nobel committee awarded Prime Minister Abiy Ahmed the Nobel Peace Prize of 2019, many hoped the accolade would strengthen his resolve toward democracy and peace.

Others, including myself, however, were concerned. His decision to dissolve the Ethiopian People’s Revolutionary Democratic Front (EPRDF) coalition signaled a consolidation of power and his rapprochement with Eritrean President Isaias Afwerki was a harbinger of regional instability.

The Nobel Prize was awarded to Abiy for his “efforts to achieve peace and international cooperation, and in particular for his decisive initiative to resolve the border conflict with neighboring Eritrea.”

Ending a 20-year-old conflict between these two countries is worthy of much praise. Yet, by mid-2019, it had become evident that this ‘peace process’ with Eritrea had ulterior motives, charged by national politics and a tactical alliance with Isaias. It was intended to stifle a major political opponent inside Ethiopia, the Tigray People’s Liberation Front (TPLF).

One would expect the Norwegian Nobel committee, an organization with a century-old tradition and a wide global network, to have conducted sufficient research into Abiy’s record since assuming office in 2018.  If so, the committee wouldn’t have missed the many clues between 2018 and 2019 that point to the fact that this is not a man of peace—but rather one who rules by deception, double-dealings, and disregard for the wellbeing of citizens.

When Abiy received the prize, one of his accomplishments read: “After 16 years of  “no war, no peace” between the two countries [Ethiopia and Eritrea], Abiy Ahmed broke the deadlock and accepted the decision. In September 2018, he and President Isaias signed a historic peace agreement.”

The TPLF was elected by 2.6 million people in September 2020 and had formed a popular regional government just weeks before the war in Tigray began.

When a Nobel Peace Prize is linked to a peace deal, it is customary for it to be shared by the two parties, but Isaias was not included in this one. It seems that the committee had taken note of the fact that since 1991, he has led a pariah state, sometimes referred to as “Africa’s North Korea” and ranked 180th out of 180 countries in the world press freedom index.

What the committee did not seem to have considered is Isaias’ malicious intentions for revenge, once Tigray and its leaders found themselves sandwiched between Eritrea and the rest of Ethiopia.

In Abiy, Isaias saw a formidable tool to achieve his goals of destroying Tigray and its leaders. Abiy also saw a great tactical tool in Isaias to weaken Tigray and its political elite in order to consolidate his power in Ethiopia and the region.

Consistent with what many have predicted, Abiy and Isaias have sadly, but successfully, transformed the “no war, no peace” situation into a full-blown civil war involving the Eritrean and Ethiopian military along with Amhara Special Forces. This is in addition to alleged support from Somali soldiers and the United Arab Emirates drones.

In essence, this is the first Nobel Prize-winning peace agreement that delivered a catastrophic war featuring probable war crimes and crimes against humanity.

The Nobel committee cited that Abiy, “granted an amnesty to political prisoners and abolished press censorship”.

This was in fact part of the sweeping reforms that were already promised by the Ethiopian Peoples’ Revolutionary Democratic Front (EPRDF) and Abiy’s predecessor, Hailemariam Desalegn. As a member of the coalition, the TPLF voted in favor of the release of prisoners and Abiy’s appointment as the head of the EPRDF.

To our dismay, this trend didn’t last very long. Politicians and journalists alike have now been detained in the hundreds. Eskinder Nega, Bekele Gerba, and Jawar Mohamed are some prominent examples.

Part of the committee’s statement at the time read, “Democratization poses serious challenges in a country with 100 million inhabitants and more than 80 different ethnic groups. In 2019, Ethiopia, a country with no tradition of free elections and democracy, was still racked by major internal conflicts. At the time Abiy Ahmed received the Nobel Peace Prize, there was considerable suspense as to whether he would succeed in fulfilling his promise of free and fair elections in 2020.”

There would hardly be any suspense as the elections set for May 2020 were postponed under the pretext of the COVID-19 pandemic. Yet the election, postponed once more after that, is set to take place this June, arguably as the pandemic reaches its peak in Ethiopia.

Tigray went against this decision and conducted its regional elections in September 2020, which resulted in a landslide victory for the TPLF—an election Abiy’s government dubbed illegitimate and eventually led to the all-out war.

Seven months ago, Abiy declared war on Tigray region in what he called a “law and order operation” in response to what the federal government described as TPLF’s attack on the Northern Command of the Ethiopian military. In truth, the federal intervention had long been prepared. The war has continued to this day; thousands have been killed, millions more displaced, and scores of women and girls systematically and violently raped.

It has resulted in the destruction of private and public infrastructure, including houses of worship, and atrocities and war crimes are being committed on a massive scale. What makes this war especially disturbing is how it has targeted civilians, with international norms of engagement, including the Geneva Conventions, breached.

All this has been documented by human rights and humanitarian agencies and the reporters who have managed to visit the otherwise isolated region.

The question that has to be asked now must move past Abiy’s reasons for declaring the war but rather what the Nobel committee is awaiting to revoke this honor from him. How can it sit idly while one of its laureates breaches international humanitarian law and commits possible war crimes that horrify the world?

In addition to the unique elements of the ongoing tragedy in Tigray, it bears similarity to what the world witnessed in Rwanda and Syria: people are killed, raped, and starved because of their identity while infrastructure and heritage sites are destroyed in what appears to be an attempt to erase Tigray’s identity.

What has unfolded in the aftermath of Abiy’s peace prize is extremely frightening. The war has taken on a regional dimension and is likely to trigger the destabilization of the Horn and possibly the Red Sea region.

In 2019, the Norwegian committee, like many others, may have seen hope in Abiy. But like all those, at home and abroad, who had a fleeting glance of democracy in Ethiopia, the honorable committee was duped by the soft-spoken premier.

Today, in addition to the war in Tigray, hundreds are routinely dying across Ethiopia, especially in the Benishangul-Gumuz and Oromia regions, which are, in some areas, run by special militarized command posts as a result of significant ethnic tensions and volatility.

It is disheartening to see the Nobel Peace Prize has been given to a man who was planning a war on his own people and who is failing to protect innocent civilians across the country. Sadly, the prize has further emboldened Abiy in his campaign to consolidate power by coercion.

Millions are suffering, and Alfred Nobel is turning in his grave.

The Nobel committee’s bylaws do not allow for revocation, but I argue that it can change that.

I believe the bylaws could be amended, especially in light of what Abiy is doing in Tigray. At the very least, a firm condemnation of Abiy’s actions by the committee is long overdue.

The committee is yet to make a statement or acknowledge what has now clearly been revealed as a misjudgment. It has to live up to the noble and sacred heritage of the peace prize by doing the right thing and make a public stand to acknowledge the suffering of millions at the hands of one of its laureates.