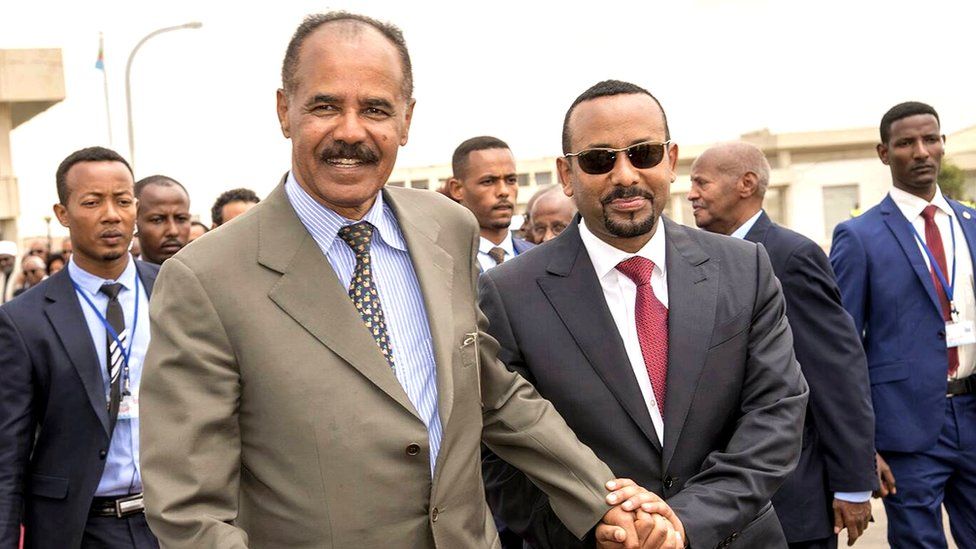 Tigray is being decimated because its ruling party presents a challenge to two strongmen.

Ethiopian Prime Minister Abiy Ahmed and his ally, President Isaias Afwerki of Eritrea, are waging a catastrophic war in Tigray that has caused alarm globally, including at the United Nations Security Council (UNSC).

The UNSC has put Tigray on its agenda due to the gross human rights violation committed by Ethiopian and Eritrean troops in the region.

Tigray was a safe and peaceful region in Ethiopia and the TPLF had won in the regional elections just a few months before the war.

Abiy claims the war was started following the TPLF’s attack on the Northern Command of the Ethiopian National Defense Forces (ENDF) in Tigray, but the writing was on the wall ever since he and Isaias forged their unholy partnership in 2018.

Both have a common interest in eliminating the TPLF, though for different reasons.

The secretive nature of the relationship between Abiy and Isaias was a precursor to what would come. The two leaders met many times before the war, the dividends of which are not evident other than the war on Tigray.

Not long after Abiy assumed power in April 2018, his regime launched a two-pronged campaign; one against Tigrayan opinion leaders and another at the government of Tigray. He did this by undermining Tigrayan socio-political leaders and crippling the region’s economy with blockades.

These activities were part of a larger pre-war preparations.

Both sides of the conflict have diametrically opposed narratives of how and why the war started.

Abiy, along with his allies, seeks different benefits from the war but they all have the same narrative: that it was initiated by the TPLF, an organization they blamed for all the ills of the country.

However, this is not accurate.

To start with, blaming the TPLF for all the turmoil in the country is not justified. The TPLF was but one member of the ruling coalition, the Ethiopian People’s Revolutionary Democratic Front (EPRDF). Although the TPLF was the dominant force, other members of the EPRDF ought to be responsible for both the successes and failures under their leadership.

Also, what are the measurable outcomes of Abiy’s reformed government? Is Abiy’s human rights record any better than that of the TPLF and does his party have the moral standing to designate the TPLF as a “terrorist organization”? Is this a mere smear campaign to conceal a ‘dirty’ political agenda, or is there any currency in the allegations against the TPLF? These questions deserve further scrutiny through both a historical and an ideological lens.

Comparable to a center-left party in a Western country, the TPLF has been prominent or dominated Ethiopia’s politics for the past half a century. It is admired by many and demonized by others. Some still question the party’s political motives and objectives.

In the past three decades, the TPLF is credited by some for the country’s incredible economic progress, its regional diplomatic influence, and noted for the discipline of the party, including during its armed struggle. For those that understand the TPLF’s historical journey, its pragmatic political ideals, and its relationships with Ethiopia’s political elites, the views of its critics may seem bewildering.

Although it has had its glorious years and its day of reckoning, the TPLF’s track record is not as its die-hard critics would like to posit.

As a rebel force in the 1970s and 80s, the TPLF established a strong local base in Tigray enjoying popular support and admiration for its discipline and determination. Party members and leaders alike led sacrificial lives giving priority to the safety and protection of the peasantry—and, in return, the people of Tigray supported the TPLF’s ultimately successful armed struggle.

The areas they occupied enjoyed relative stability while chaos prevailed elsewhere. This cemented their relationship with Tigray’s rural communities. Despite facing the strongest military in sub-Saharan Africa at that time, they harnessed this popular support and helped overthrow the military regime known as Derg after 17 years of hard struggle.

Like many Ethiopian political elites, top members of the TPLF were students, and some came from relatively well-to-do families. They saw Haile Selassie’s imperial rule as archaic and unfit to transform Ethiopia to modernity.

Political movements of the 1970s including TPLF were also inspired by anti-colonial movements and left-wing political ideologies. But the TPLF was among the few parties that believed only peasant-supported struggle can oust the freebooter military government that filled the power gap when imperial rule collapsed in 1974.

Eventually, the TPLF-led EPRDF coalition succeeded, in part, because of its emphasis on a broad-based, peasant-supported struggle, while many other movements failed. Coupled with ideological differences, this exposed the TPLF to sharp criticism and negative sentiments that lingered for decades.

This coalition, after securing the Ethiopian state apparatus in 1991, made history by inviting all other armed movements and opposition parties, hitherto illegal, for the establishment of a transitional government.

Though the early years of the transitional government were not easy, EPRDF was able to restore peace in the capital and many parts of the Ethiopian countryside. The transition to a civilian political role was eased by the fact that EPRDF’s success was not based solely on military might but on a strong political arm that was able to chart a vision for postwar Ethiopia.

The TPLF distinguishes itself from its predecessors, and the current government, in the way it treated deposed military leaders when it gained control of the country in 1991.

Generals and political leaders accused of committing war crimes and crimes against humanity were given their day in court.

The Derg was responsible for the death of hundreds of thousands of people including students, members of the royalty, wealthy individuals, dissenters, and underground opposition members. The TPLF’s decision to resort to legal means was an indicator of its desire to break the cycle of revenge and resentment from which, unfortunately, its opponents are unable to escape.

The TPLF-led EPRDF also made economic and social transformation its prime occupation once it won its fight for liberation. This gained it considerable support from Ethiopia’s rural communities.

During this time, Ethiopia rose to greater heights in the economic and diplomatic arenas.

In 2017, just a year before Abiy took over, it was the fastest-growing economy in the world. The World Bank considered Ethiopia to be one of the fast-growing African economies with an average growth record of 10.6 percent over more than a decade.

The country also produced two five-year Growth and Transformation Plans to transform the country into a manufacturing hub, though the second was cut short when Abiy came to the scene.

Overall, Ethiopia was slowly but surely leaving behind its image of famine and civil war.

Abiy was arguably one of the most popular leaders in the history of the nation during his first few months in office. Human rights abuses were widespread during the years of the EPRDF and many were hopeful that a new leader would guarantee these rights.

Instead, developmental and peace-building policies were upended, a process that included the dissolution of the EPRDF coalition, the most enduring political alliance in Ethiopian history, though one with a continued tendency to authoritarianism and a growing culture of impunity.

While each of the four EPRDF member parties publicly accepted responsibility for wrongdoings, the blame was put squarely on the TPLF during this period of political transition. This was done to regain popularity and dissolve and substitute the coalition with a new one, the Prosperity Party (PP).

Abiy and his new party then asked the TPLF to join the rebranded party. The TPLF rejected the offer.

When TPLF refused to join the PP, state-led systemic media campaigns were launched accusing party senior leaders of corruption and maladministration. Paradoxically, the new leaders absolved themselves from any guilt during the previous tenure.

Why would Abiy want the TPLF to join his party if indeed he believes it to be a terrorist group that threatens the unity of the country? Apparently, Abiy is only concerned about one thing—ensuring his authority goes unchallenged.

This takes us to the reality behind the current ordeal.

Besides Abiy, the other major players in the war on Tigray are Eritrea and the Amhara elite. Isaias had waited two decades to get even with the TPLF for the losses he suffered in the 1998-2000 Ethio-Eritrean War as had the Amhara elite, who had dominated the centralized administrative system prior to 1991 and now have an irredentist agenda.

This tripartite partnership needed a common excuse for the joint project—accusing the TPLF of promoting ethnic division and conflict. However, the TPLF did not bring ethnic conflict to Ethiopia as claimed by Abiy and his supporters.

Attacking and silencing the standard-bearer of the EPRDF’s policies was, therefore, a carefully chosen strategy: change public opinion to neutralize the TPLF’s capacity to challenge the new leadership and dissuade any potential partnership with other like-minded parties. The TPLF’s political footing and its military experience made it a prime target.

The war declared on 3 November 2020, under the pretext of “enforcing law and order”, is a smokescreen devised by this tripartite group. The evolution, scope, and extreme nature of the violations are evidence of planning and the result of many years of resentment.

In his war against Tigray, Abiy has enlisted the full military capacity of Ethiopia and Eritrea, regular and paramilitary forces from neighboring Amhara regional state, and, reportedly, forces from the Republic of Somalia and drones flown from the Assab base that the United Arab Emirates leased in Eritrea.

This disproportionate use of force has resulted in the death of thousands of civilians. Girls and women have been raped, more than five million people are in need of emergency food assistance, and famine hit the region.

The people of Tigray have been denied access to food, health services, electricity, internet, telecom, banking, and independent media. Their means of livelihood have been deliberately destroyed: crops have been burned down, cattle killed and looted, and grain stores have been destroyed.

With what moral authority can either Abiy or Isaias blame the TPLF for this carnage? The TPLF is no collection of angels but its opponents are morally and ideologically more corrupt. The current devastating war is a competition for stature and dominance. As dictators, Abiy and Isaias are threatened by the TPLF and do not accept any solution short of its annihilation.

The war in Tigray has shown the world how public opinion can be manipulated and how countries get dragged into conflicts that cost thousands of lives and turn years of economic gain to ashes. But there is a more serious question.

The international community laments its passive role in the past genocide in Rwanda and atrocities elsewhere. Therefore, why is it allowing another to take place?

Ethiopian Canadians for Peace (ECfP) is formed by a group of professionals in Canada to promote dialogue to resolve the political deadlock in Ethiopia and the war in Tigray.