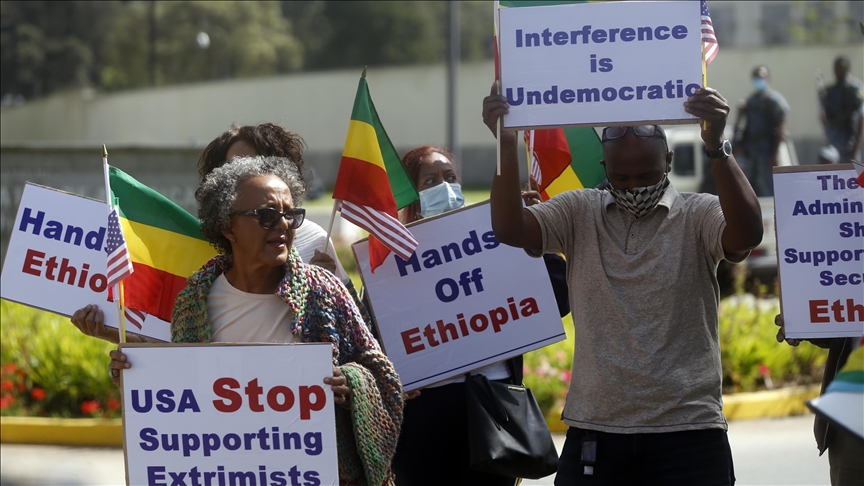 The Ethiopian government and its supporters are engaged in a vicious propaganda campaign.

One of the defining features of the war in Tigray has been the Ethiopian government’s success in seizing control of the narrative.

The offensive against Tigray has from the outset been accompanied by a communications and media blackout. Prime Minister Abiy Ahmed’s government has deployed the entire apparatus of the state—including publicly owned media and its diplomatic missions across the world—to wage a systematic and deliberate campaign to control the flow of information out of Ethiopia and discredit any source that disagrees.

These twin efforts have not only emboldened perpetrators of human rights violations but are also directly hindering efforts to address the humanitarian crisis in Tigray.

An oft-repeated phrase in reports on Tigray from media outlets and human rights organizations is “cannot be independently verified” as a result of communications shut down and/or because access to the area is prohibited. With the Internet completely down in almost all of Tigray and intermittent phone service limited to a few cities, a large portion of the Tigrayan population remains unreachable seven months into the war. This suggests that despite claims to the contrary by the government, the communications blackout has been by design.

Similarly, the government has employed various means to block reporters’ access to Tigray, including jailing, intimidation, and physical harm of journalists. In January, journalist Dawit Kebede was shot dead in Mekelle in an attack both his relatives and colleagues say was the work of Ethiopian security forces.

Since then, and even after the government had ostensibly given permission for international media outlets to send in their reporters in February, the government has continued with the intimidation and incarceration of local affiliates working with foreign news outlets.

Last month, the government revoked the permit of Simon Marks, a New York Times journalist for his coverage of Tigray.  His expulsion, “marks a new milestone … in the harassment of journalists” according to Arnaud Froger, the head of the Africa desk of the Reporters Without Borders.

Perhaps more astonishingly, Abiy’s government has been able to influence the reporting by some international broadcasters. This has particularly been evidenced in the recent bombshell whistleblower report later further corroborated based on an analysis of hundreds of internal memos and the testimonies of more than a dozen current and former reporters and managers—that the American taxpayer-funded Voice of America has been deliberately framing its reporting of the Tigray war to promote Ethiopian government propaganda.

This serves to further highlight the government’s ability to subvert free media and drive its own narrative.

The extent and the ferocity of the Ethiopian government’s censure and attempts to control the media have created fear and self-censorship among all journalists as noted by the sub-Saharan African representative for the Committee to Protect Journalists, Muthoki Mumo. According to recent reporting, at least 21 journalists and media workers have recently been detained. As a result, Ethiopia’s rank in the World Press Freedom Index has fallen two places, from 99 to 101 out of 180 countries.

And if journalists, who enjoy at least nominal protection by their official credentials, are intimidated, one can only imagine the fear felt by witnesses and local informants who are susceptible to government reprisals if they should be accused of abetting or colluding with those identified as enemies of the state. This has had the cumulative effect of stanching the flow of any information contradicting the official version.

The disinformation campaign in Tigray can be traced back to the initial framing it sought to impose. Having launched a full-scale attack that involved the combined military forces of Ethiopia, Eritrea, and the Amhara region, as well as alleged drone warfare, the government characterized the action as a “law and order operation”. And although the reaction of most observers ranged from skeptical to cynical—as attested by the almost uniform use of quotation marks in reporting—the government still maintains this narrative.

The official story is based on two claims, neither of which has been independently verified. The first was the idea there was a “brutal” attack on the Northern Command of the Ethiopian National Defence Forces; the other was an attempt to hide the presence of Eritrean troops by alleging that the TPLF had dressed some of its troops in Eritrean Army uniforms to promote their claim that Eritrean forces were involved in atrocities.

Bluff and subterfuge: Eritrea’s letter to the UN
By Mistir Sew

No evidence has been offered to support the first assertion, though it has to date not been corrected, although it has since become clear that much of the Northern Command did come under the control of regional leaders. But what is indubitable is the value of this narrative in framing the war as a reaction to Tigrayan aggression cannot be exaggerated—particularly since, as independent observers have noted, official statements of facts are often afforded the presumption of credibility.

The second claim has of course been revealed to be palpably false, with the Ethiopian government and Eritrea itself admitting the involvement of Eritrean forces in late March alongside significant reliable documentation that Eritrean forces are operating in many parts of Tigray, even in the uniform of Ethiopian National Defence Forces.

The next stage of the disinformation campaign was launched following the ‘Mission Accomplished’ claim made by Abiy on 28 November 2020, only three weeks into the war. Aware that it may not be able to maintain a complete blackout for long, from this time onward, the government launched diplomatic and social media campaigns to cover up and undermine the limited reports of the brutal war and news of the atrocities that trickled out.

The prime minister himself led the purposeful editing of reality. For example, following a meeting with the leadership of the Ethiopian Defence Forces, he downplayed reports about the use of sexual violence as a weapon of war, calling them “accountability and disciplinary gaps that will be addressed.” Other government bodies followed suit, attempting to obscure and disinform at every turn.

One example in this regard is a Ministry of Peace statement on 15 March claiming 75 percent of hospitals in Tigray were operational. This appears to have been an attempt to discredit a Médecins Sans Frontières’ report highlighting the destruction of civilian infrastructure that could amount to war crimes.

Similarly, the Attorney General of Ethiopia issued a statement on 11 May challenging the findings of Amnesty International, Human Rights Watch, and even the state-run Ethiopian Human Rights Commission on the atrocities committed in Axum. Since then, both Amnesty and Human Rights Watch have registered their concern that the official investigation ignored the massacre of civilians, and the Attorney General’s office has had to partially walk back its claims.

Records of humanitarian access and delivery have been deliberately muddied to create confusion and uncertainty. For example, the government persists in claiming that it had reached 4.5 million beneficiaries—essentially everyone needing support. Reports by United Nations agencies, however, revealed that only 12 percent of those needing emergency shelter and food aid have actually been reached. Even more alarming are reports that aid deliveries to large swathes of Tigray were blocked by Eritrean forces. These reports have been corroborated by a CNN camera crew and the UN.

Diplomatic missions and media abroad have been at the forefront of the disinformation campaign. For example, the Ethiopian ambassador to the U.S. actively disseminated the bizarre allegation that an actor in a re-enactment of the Axum massacre was also an informant to the Amnesty Report on the massacre.

The Ethiopian ambassador to the European Union also accused Finish Foreign Minister Pekka Haavisto of making a wrong assessment of the situation in Tigray while at the same promoting less than truthful numbers on the humanitarian access allowed by her government.

Mourning the disgrace of Ethiopia and Ethiopians
By Mistir Sew

Recently, Haavisto claimed that Ethiopia’s leaders have said to him, in closed-door talk, that they will “wipe out Tigrayans for 100 years.” To this, Ethiopia’s foreign ministry responded by saying Haavisto’s comments are “ludicrous” and a “hallucination of sorts or a lapse in memory of some kind.”

In addition to such appalling and deceitful diplomacy, government supporters have employed the use of fake “authorities” on government social media accounts to bolster their dubious claims. For example, a state-run broadcaster ran quotes from a fake Twitter account posing as a former UN diplomat to criticize international pressure for humanitarian access and independent investigations into mass atrocities.

A more insidious tactic in the disinformation campaign is to defame and intimidate anyone attempting to highlight the humanitarian crisis and human rights violations in Tigray.

Sympathy for the “devil”

In addition to the imprisonment and intimidation of journalists already mentioned, other analysts and human rights activists have had their permits revoked and received death threats. Similarly, Tigrayans and others who do not adhere to the official government line are demonized, including foreign governments and international organizations. Those who sympathize with the TPLF are dismissed as having been bought off by the TPLF. Even the patriarch of the Ethiopian Orthodox Church was not spared this treatment in a campaign organized by government supporters when he spoke out against the atrocities in Tigray.

The above is a brief catalog of some of the tactics employed by the Ethiopian government to ensure maximal uncertainty in the international community about events in Tigray. But this has become increasingly untenable because the Ethiopian government can no longer contain the brutality of the mass atrocities characterizing the war and the dire humanitarian situation.

Aware that the narrative has swung against it in the international arena, the government has now moved to aggressive posturing, deploying heightened nationalistic rhetoric under the banner “Hands off Ethiopia.” This campaign is designed to foment outrage among Ethiopians against what is called “Western interference.” This plays on the national mythos of anti-colonial patriotism, and the rather intricate conspiracy theory that there is a sinister alliance positioned against the Grand Ethiopian Renaissance Dam.

This new tack portends further escalation of efforts to silence and control the population in Tigray and other parts of Ethiopia. One indication is the reported abduction of at least 500 young men from the IDP camps in Tigray by soldiers who allegedly taunted “We’ll see if America will save you now.”

It also suggests continued resistance to allowing unhindered access to humanitarian aid and further endangers humanitarian workers, who are being met with hostility by Ethiopian and Eritrean forces that see them as unwelcome witnesses.  At least seven humanitarian workers have been killed while delivering assistance since the conflict began.

Even more alarming is the government’s apparent intent to continue using hunger as a weapon. This is evidenced clearly in the recent rejection of calls for a humanitarian ceasefire to allow for planting so as to avert the risk of famine.

The government’s ability to maintain with impunity a narrative that has been consistently discredited by hard evidence has only emboldened its authors to violate international humanitarian and human rights conventions. Several massacres have been credibly documented, along with the weaponization of rape and the destruction of civilian infrastructure, including schools and hospitals.

The increasingly more aggressive counterattack against accountability from the international community suggests that the government’s commitment to its own narrative takes precedence over all considerations, including honoring international humanitarian and human rights obligations to ensure the survival of the five million people currently needing aid in Tigray.