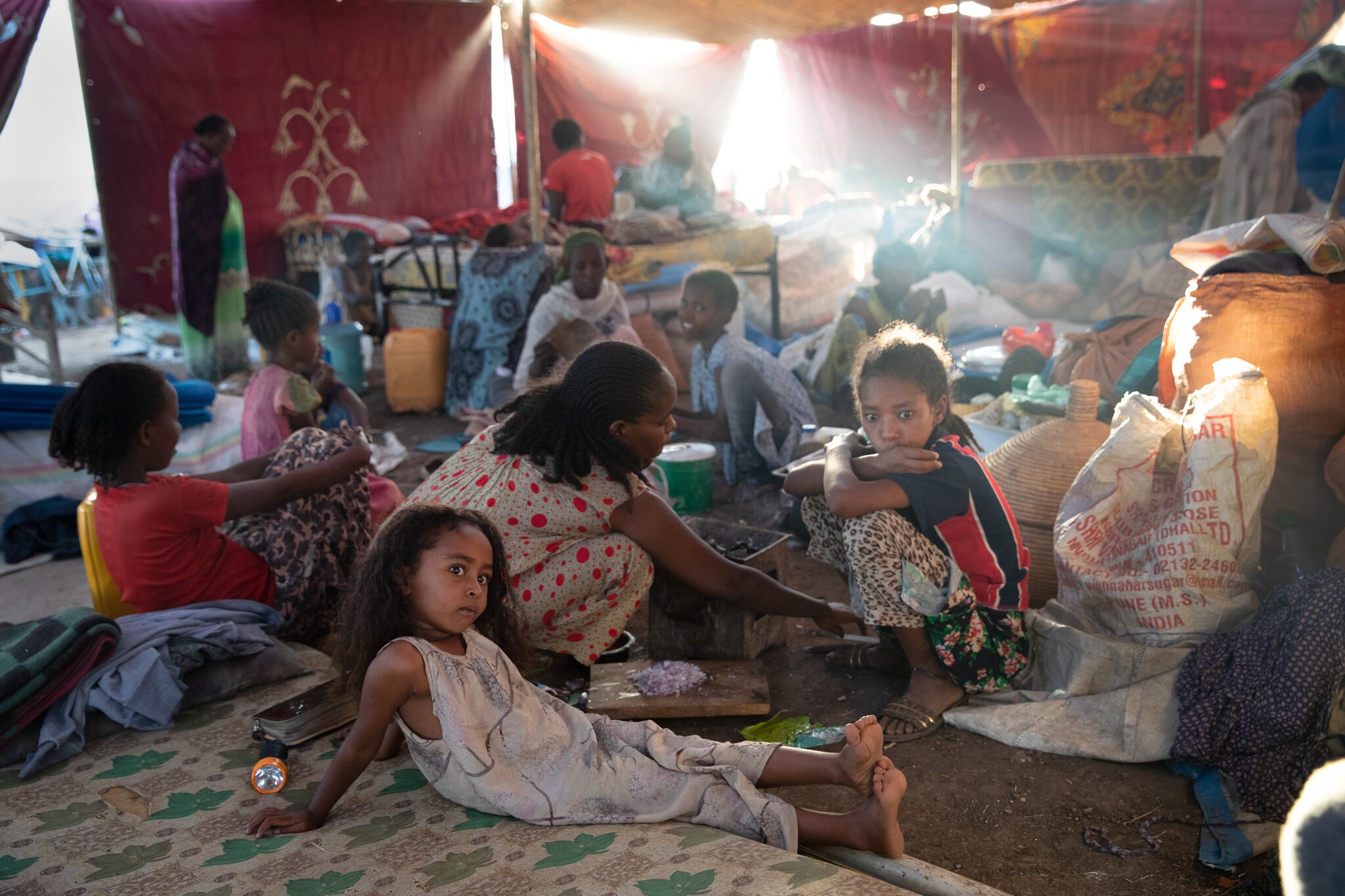 In the form of two letters to his mother who lives outside Tigray, a resident of the region analyzes the war and the pain Tigrayans have endured.

“It is with their bodies that soldiers sexually violated but our soldiers were violated with knives”.

Such a statement would be unacceptable even from a delinquent teenager, let alone the leader of a country where countless women and young girls have been sexually violated. However, this was precisely the language used by Prime Minister Abiy Ahmed before parliament and stands as a grotesque demonstration of his unfitness to hold office. The statement diminishes the gravity of widespread sexual assault and rape committed against women and girls in Tigray.

Credible sources report harrowing stories: not only did soldiers rape and sexually assault young women and girls, but they also forced family members to rape one another, sometimes at gunpoint. Foreign objects such as iron rods, nails, and stones were inserted into women with the intention of damaging their reproductive organs.

The degrading treatment of the Tigrayan people is repulsive and must be unequivocally condemned. But the prime minister exacerbates the pain of survivors by minimizing their suffering. His statement abandons any pretense that he considers the Tigrayan people as part of Ethiopian society by choosing to contrast “our soldiers” with survivors. His statement justifies acts of sexual violence against innocent civilians.

Like you, I wished Abiy well when he was first elected. I hoped he would do right by all Ethiopians. Unfortunately, my hopes were misplaced. Not long after he came to power, Abiy began demonizing the people of Tigray.

Abiy’s rhetoric has referred to TPLF members as “ye Ken jib”—an Amharic term for ‘daytime hyena’—implying their insatiable greed. As you know, many people viewed this term as something of an ethnic slur.

Abiy has alienated Tigrayans through his dealings with Eritrean President Isaias Afwerki. The senseless 1998-2000 Ethiopia-Eritrea war cost tens of thousands of lives on both sides. Since then, the ‘no war, no peace’ situation has been unsatisfactory for both countries.

Any effort to resolve disputes and bring peace is welcome. However, these efforts must have included Tigrayans and their elected representatives, as they will be one of the most affected groups in the deal.

Abiy’s current deal with Eritrea was reached without proper consultation or involvement of Tigrayans. In the wake of the latest agreement, Isaias declared “Woyane game over.” Is it any wonder so many Tigrayans concluded the agreement was a pact of aggression whose objective was to destroy Tigray? After all, it was an opaque agreement with the president of a brutal, totalitarian regime that had publicly declared its intent to destroy ‘Woyane’.

Abiy made significant preparations for military actions in Tigray long before the war broke out in November 2020. He admitted to parliament that he had secretly built up the army’s drone capacities, made visits to Eritrean military facilities, and hosted Isaias at Ethiopian military bases.

Abiy asked Sudan’s Military Council leader, General Al-Burhan, to secure the country’s border as he had prepared to take military action. The late Amhara Region police commissioner, Abere Adamu, admitted his forces were deployed and on stand-by before war broke out, and that there were extensive contacts and joint arrangements with the Northern Command prior to military engagement. Eritrean forces were equally prepared for conflict, joining the fighting days after its outbreak.

Given the extent of Abiy’s preparations, an imminent attack on Tigray by his forces and their allies was a reasonable conclusion.

What is the objective of Abiy’s war on Tigray?

He told Ethiopia and the world that his mission was a “law and order operation,” to bring leaders of the TPLF “junta” to justice.

But, does bringing a handful of officials to justice justify a fully fledged war? Does that justify countless civilians’ deaths and widespread sexual violence? Or the destruction of places of worship, factories, health centers, and ancient religious manuscripts? Does it justify the displacement of hundreds of thousands and the starving of millions of Tigrayans? Does the objective justify conspiring with a foreign army and inviting it onto Ethiopian soil? Does it justify this foreign army pillaging, looting, and raping your people?

This is a monumental and historic betrayal of the people of Tigray and will forever remain a source of shame for the country. There will come a day when Abiy will have to answer for these wrongs.

For months, Abiy blocked aid from reaching people lacking food and shelter. This has continued despite pleas for access and repeated warnings from international humanitarian organizations. Only after extensive international pressure did he agree to allow some aid to reach these people. But despite this policy change, access is unsatisfactory, and millions of people are without adequate food and shelter.

Given this, I was appalled when he said he is to donate his salary to “help” those in need in the Tigray region.

I say to him: Mr. Prime Minister, if you truly want to help, remove both Ethiopian and foreign forces from Tigray, and allow unfettered access for international aid agencies. It is your actions that have put the people of Tigray in this unbearable predicament, so please spare them the indignity and pain of being forced to “accept” your unwelcome personal “donations.” It is also grotesque that you seek to get positive publicity from a humanitarian disaster you helped create.

The Tigrayans I know have become disillusioned with the idea of remaining in Ethiopia. Who can blame them after the sustained and horrific campaign of terror they have endured? Large sections of the country’s ruling elite support the ongoing campaign, which has even received the blessings of religious institutions and their leaders. Abiy’s monumental military folly and the elites’ cheerleading him have put Ethiopia at serious risk of disintegration. If Abiy thinks he can impose his will on the people of Tigray by force, he is sorely mistaken.

I know that you have been watching ESAT and its ilk who have been cheerleading his campaign but the indiscriminate killing, abuse and suffering of Tigrayans are real and must be stopped.

We all must speak out against this campaign of terror; we cannot leave it just to Tigrayans. My children, your grandchildren, will ask us what we did to stop this injustice and if our answer is nothing or worse, they will judge us harshly.

Conflict in Tigray is about TPLF, not ethnic federalism
By Teshome M. Borago

The conflict has now entered a new stage. Tigrayan forces led by the TPLF, which is now labeled a “terrorist” organization by the government, have dealt a crushing blow to the Ethiopian National Defence Forces (ENDF), forcing them to flee Mekelle and large parts of Tigray. The same has happened with Eritrean forces.

I was pleased when I saw Tigrayan forces regain control of their capital and celebrate their freedom as that indicates the end of rampant sexual violence, indiscriminate killing of civilians, and the deliberate destruction of public facilities.

The jubilation of Tigrayans must be measured, however, as tremendous challenges and dangers still stand before them. Millions are at risk of starvation, and there are serious allegations regarding the use of hunger as a weapon of war by Abiy’s government.

Hundreds of thousands have been displaced and are living in temporary shelters. Harassment, abuse, and arbitrary detention of Tigrayans in other parts of Ethiopia have increased significantly since the ENDF’s retreat from Mekelle.

Abiy’s conduct in the wake of the fall of Mekelle confirms he is unfit to lead the country. He has remained steadfast in dishonest narratives of ENDF military successes. He claims the successful completion of his forces’ mission was followed by a pre-planned and orderly departure. However, abandoned heavy weapons and thousands of federal troops being held prisoner in Mekelle demonstrate a hasty and disorderly retreat.

Sadly, military officials insisted images of thousands of captured federal soldiers were “photoshopped”. These claims are not only deceitful but also betray the prisoners of war who risked their lives for Abiy’s cause.

Following the retreat, Abiy has made serious allegations against civilians in Tigray. He accuses them of seeking more aid than they need in order to provide the extra aid to the rebels. He also accuses them of killing ENDF soldiers. His conflation of TPLF forces with the Tigrayan population, as well as his repeated use of dehumanizing language against Tigrayans, is dangerous, irresponsible, and reprehensible.

Abiy has partly attributed the ENDF’s withdrawal from Tigray to the hostilities from the local population. This is a crucial statement with far-reaching consequences. The hostility is an understandable and natural reaction to the atrocities the people of Tigray endured over the preceding eight months. Instead, Abiy purposefully portrayed the people of Tigray as traitors and has made dangerous conflations between the TPLF and Tigrayan civilians.

Abiy described the TPLF as “junta” and “weeds.” He said “the enemy the country faces is a cancer”. Given his crass blurring of the people of Tigray with TPLF, this use of dehumanizing language risks inciting further large-scale atrocities against the people of Tigray. Incendiary language helped fuel the ethnic hatred that resulted in the Rwandan genocide, and its use in Ethiopia must be condemned by all. Unfortunately, far from condemning Abiy’s language, Ethiopian elites are repeating and amplifying his dangerous rhetoric.

Abiy’s language, conduct, and policies continue to put Tigrayans in grave danger. His government blocks efforts by the international community to provide humanitarian assistance, putting millions at risk of starvation.

Across Ethiopia, Tigrayans are being persecuted because of their ethnicity. Abiy has not only put Tigrayans in danger but has now put the survival of the entire country at risk. The defeat of his army should have led him to pause, change course, and seek a negotiated settlement to the conflict.

As its leaders indicated, the current advance of Tigrayan forces outside of Tigray has the objective of breaking the siege on Tigray and pressuring the government to come to the negotiation table.

Abiy, nevertheless, does not seem interested in negotiations, and he is now mobilizing tens of thousands of Ethiopians to fight for his cause.

Let us hope Abiy sees the complete madness in his policy as hope, at this moment, is all we have.