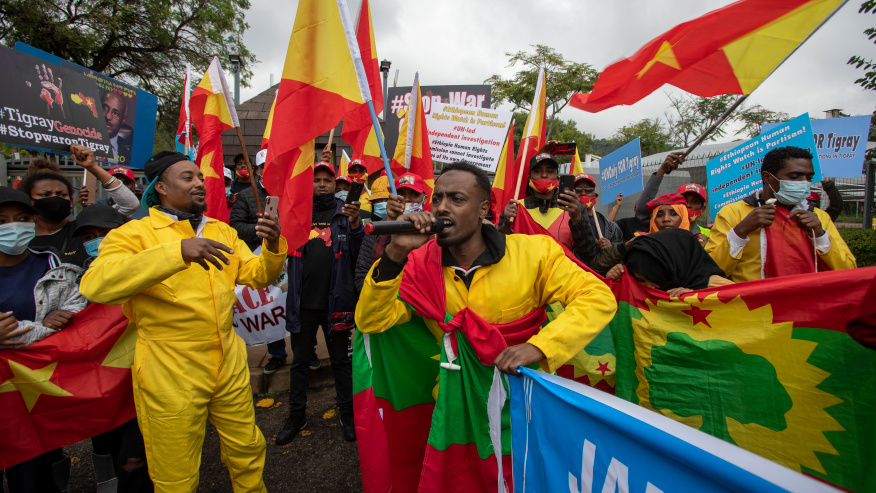 Having closed the door to constitutional secession, Tigrayan nationalists need a fellow separatist group to achieve independence, and so mirror the role they played in the 1990s.

On 11 August, Kumsa Diriba, aka ‘Jaal Marroo’, the leader of the Oromo Liberation Army (known as ‘OLF/Shene by Ethiopian authorities) announced the military alliance struck between his force and the armed wing of the outlawed Tigray People’s Liberation Front (TPLF) regional government.

The OLA has been fighting against the government of Ethiopia in the western and southern parts of Oromia. TPLF, which dominated Ethiopian politics in the three decades prior to 2018, is a major player in the ongoing disastrous conflict in Tigray and surrounding parts of Afar and Amhara regions.

Early this year, in March, the federal parliament proscribed both as terrorist groups for taking up arms against the state and collaborating in violence since Prime Minister Abiy Ahmed took power in March 2018.

Neither of the two groups had hitherto admitted any collaboration. According to their leaders, however, they now work together with the aim of bringing down the government in Addis Abeba. To that effect, they will share information and might cooperate militarily.

While bringing down the federal government is the apparent motive behind the alliance, in actuality, the aim is also smoothing the road towards the secession of Tigray.

For the Oromo Liberation Front (OLF), to which the OLA is, to all intents and purposes, the military wing, full autonomy for the Oromo people including secession had been its primary goal since its inception in 1973.

In 2012, the group reportedly dropped the secession demand and vowed to work towards the unity of Ethiopia. That was barely a year after the TPLF-led coalition government designated OLF a terrorist organization. According to one of its founding members, the TPLF’s political agenda had also been re-oriented after originally pursuing the independent republic of Tigray.

History tells us that the TPLF and OLF played the leading role in sketching the framework for legalizing the right to full measures of self-determination in Ethiopia.

Though the idea of self-determination for the “nations, nationalities, and peoples” traces its root to the popular 1960 and ’70s students’ movement that eventually ended the imperial regime of Haile Selassie in 1974, TPLF and OLF, with other ethno-nationalist groupings, were the champions who fought for legalizing the right in the Transitional Government Charter of 1991.

During this time, the two were working together in some sort of covert alliance until the OLF was driven out of the transitional government by the TPLF. The TPLF-dominated EPRDF, however, pursued constitutionalizing the right to self-determination and ultimately succeeded by including the unconditional right to secession in the grundnorm of the land in 1995, i.e., the current constitution of Ethiopia.

According to the constitution, any nation, nationality, or people in Ethiopia can demand secession without any precondition such as subjugation, domination, exploitation, discrimination, violation of rights, and so on.

The procedural frameworks are also undemanding: if the legislative council of the nation, nationality, or people concerned approves the demand for secession, the federal government has to organize a referendum, and, if it is voted for, secession will be effected—that is it.

That is the background to the TPLF-OLA alliance, which also needs to be related to secession, which both TPLF and OLA consider as a viable option.

Back to secession talk

Before the outbreak of the Tigray conflict in November 2020, TPLF had been threatening to break off the ties with the federation and to build a de facto state of Tigray.

For example, in his speech at the 45th anniversary of the foundation of TPLF on 19 March 2020, Debretsion Gebremichael, the current leader of TPLF and the then acting president of the region, had called for the representatives of Tigray at the federal legislative council to declare the “State of Tigray,” the reason being alleged undue pressure on and persecution of Tigrayans by the federal government.

Likewise, the September 2020 decision of the federal government to redirect the budget subsidy of Tigray away from the regional executive to lower administrative tiers was taken by senior officials as pushing Tigray out of the federation.

These positions show the mindset of the TPLF before the war broke out.

Following their return to Mekelle, the capital of Tigray, TPLF senior officials, including the leader, continued hinting at the need for the independence of Tigray if the people chose to take that path.

Before October 2020, Tigray had, legally speaking, the option to go for secession through the constitutional procedures. There was a legitimate regional council that could approve the demand for secession and request the federal government to hold a referendum.

However, that regional council was replaced by a new one after the region-held election on 9 September, which the federal government declared unconstitutional. Therefore, the new regional council is not a legitimate body in federal eyes and cannot approve a demand for secession and request a referendum.

Nor can the region hold a referendum by its own and unilaterally declare independence, as that will be unconstitutional—and will probably not be accepted by the international community as well.

As things stand, the constitutional path—and, therefore, peaceful path—towards secession is closed. Also, as long as Abiy’s government is in office, having just earned a five-year mandate, there is no way that TPLF can read from the constitutional script it authored.

Rather, it has to find another way out of the conundrum. It is here that that TPLF may see an alliance with OLA as a way forward.

In 1993, after over two decades of bloody civil war, Eritrea seceded from Ethiopia through an internationally supervised referendum.

Though various historical factors have played into the independence, one crucial factor that eased the process was the fact that the Eritrean People’s Liberation Front (EPLF), under the leadership of Isaias Afeworki, the current president of Eritrea, had political leverage over TPLF, which, in turn, controlled Ethiopia.

After the military victory over Derg and de facto control over Eritrea, EPLF knew that its desire for independence needed support and consent from TPLF. Otherwise, the international community would not easily accept  a unilateral declaration of independence since that is not supported under international law.

Thus, right after overthrowing the Derg and before the new transitional government in Ethiopia settled in, EPLF used its alliance with TPLF to achieve independence—Ethiopia was the first to grant international recognition.

TPLF seems to have taken a lesson out of the process that accelerated the independence of Eritrea without any constitutional procedure and hurdles to get international recognition.

Given the protracted nature of the current conflict, its animosity with the neighboring Amhara region, and the bad legacy it has left behind during its time in power, the only viable option it has to check out is to find an agent that, in the future, can play the role TPLF had played in the secession of Eritrea.

For that purpose, it has found OLA, which itself carries secession as the alpha and omega of its rebellion.

Therefore, the current alliance is needed by TPLF not for simple opportunistic reasons of toppling Abiy’s government. Rather, it is well thought out and planned: support OLA into power and then easily secure an OLA-dominated government’s consent for a referendum and, ultimately, the recognition of an independent Tigray.

As things stand, it might seem that the alliance might not achieve the intended purpose, considering the relatively fragile military and political capabilities of OLA. That could, however, change in due course with the support from Tigray forces who have strong organizational and operational capabilities.

Of course, in the meantime, the OLA movement is still important to dissipate the strength, both military and political, of the center. This does not, however, make the alliance one that is dictated by military necessities; it is rather driven by TPLF’s agenda to ease the path towards an independent republic of Tigray.

Main photo: Tigrayans and their Oromo allies in South Africa protesting the Ethiopian government over the war in Tigray; 25 March 2021; AP.

Marishet is former lecturer at Wolayta Sodo University School of Law. He is a PhD student at the Graduate Institute of International and Development Studies in Switzerland.