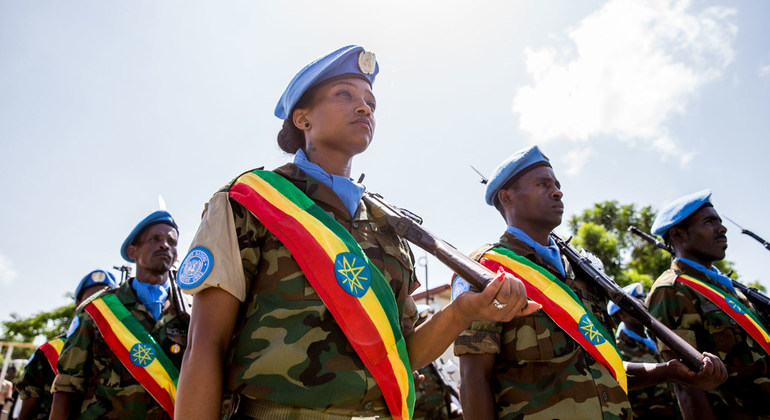 There has been little to no action taken to address the Ethiopian government’s ethnically-based expulsion and arrest of Tigrayan peacekeepers.

When Tigrayan members of the Ethiopian National Defense Forces (ENDF) were deployed to United Nations (UN) peacekeeping missions, they did so under the banner of “Together for Peace”. Respecting and honoring the brave few who put their own lives at risk in the service of their country and for the cause of world peace is a cherished norm. However, Tigrayan members of UN peacekeeping missions are getting the opposite treatment.

When the Ethiopian government launched an armed offensive against the Tigray region in November 2020, it withdrew troops from international peacekeeping missions to bolster its offensive. Citing fears over their loyalty to the federal government and ENDF, Tigrayan members of this contingent were also purged from their ranks without cause. Other Tigrayans were left with no choice but to seek asylum in order to escape abduction and internment.

Evidence of this purge was first attested to in a leaked video published by The Associated Press in which an Ethiopian military leader speaks of the need to ‘clean out our insides’ in a reference to the removal of Tigrayan service members. Soon after, an article published in Foreign Policy on 23 November revealed an internal UN document that detailed concerns that these troops were likely to face torture or execution.

The UN’s fears were confirmed after it was revealed that military tribunals are being held to sentence Tigrayan security officers to death. The Ethiopian government is seemingly using the judicial system to make a show of passing judgment on defendants who were in fact criminalized by virtue of ethnic profiling alone. The risk to the lives of these service members, including those who served under the auspices of the UN peacekeeping missions, is real.

In such a context, where identity is being used as evidence of guilt, Tigrayans require protection and open legal proceedings that are monitored and corroborated by independent organizations. The international community’s inaction and silence regarding the horrible reality of these Tigrayans has allowed the Ethiopian government to prolong their suffering.

This same government expelled seven UN officials who were operating in Ethiopia, accusing them of ‘meddling’, and arbitrarily arrested 16 local UN staff members. The UN Secretary-General stated that “Ethiopia has no legal right to expel” the UN officials. However, the institution has not taken any steps to protect its representatives, who are crucial to address the enormous humanitarian needs in northern Ethiopia.

The UN entrusts peacekeepers to uphold its broader mission of maintaining peace and security around the world, and, in return, these servicemen and women bravely put their lives on the line for this noble cause. Accordingly, the UN has a contractual and moral obligation to protect these brave men and women. However, when it comes to Tigrayan peacekeepers, the UN and the rest of the international community have turned a blind eye.

The UN’s unwillingness to address the imminent threat faced by Tigrayans who served in peacekeeping missions—and lack of persistence in demanding protection for humanitarian workers and respect for international humanitarian law—is emboldening Ethiopia’s violations.

To the honorable men and women inside of the UN peacekeeping apparatus, as well as those in donor and member countries, I ask: If you are unable to protect the bravest who have worn the uniform to promote world peace, then how can you ever realize the dream of standing “Together for Peace”?

While silence or disengagement is to be expected at a certain level from diplomatic actors and entities, given their prerogative to not fuel further division in a space as polarized as Ethiopia’s, the case of Tigrayan peacekeepers exceeds the demands of neutrality and political sensitivity.

Their silence is even more worrying as the decision of the Ethiopian government has created a security vacuum in those areas where they were deployed, such as Darfur and Abyei in Sudan and Somalia, undermining the peacekeeping efforts. These actions also overstretched the capacity of UN peacekeeping troops that are present in these areas, leaving vulnerable communities at risk of immediate violence.

Moreover, since most peacekeeping troops operate under UN contracts, their treatment is a direct violation of the UN’s policy and commitment to world peace. The UN’s inaction may cause other countries to lose trust in future missions, given that there is no guarantee for the safety of their soldiers. Any atrocity committed against Tigrayan peacekeeping troops due to an internal political conflict is, by extension, an attack against peacekeepers around the world.

How the UN handles the case of Tigrayan peacekeepers in Ethiopia—many of whom have been incommunicado for over a year—will be a testament to how much the intergovernmental organization values those it entrusts to uphold its mission.