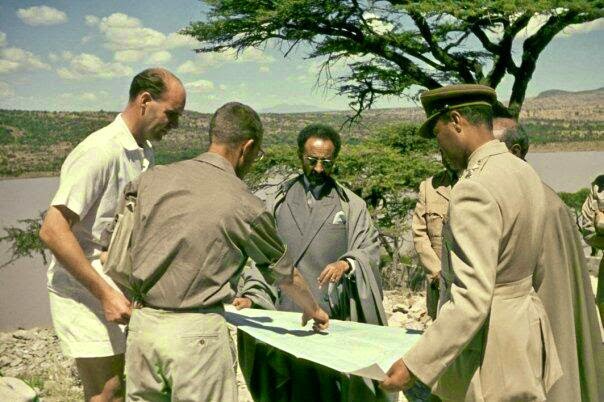 There have been efforts recently to politicize who gets credit for planning GERD.

The current official narrative in Ethiopia tends to downplay the role of former Prime Minister Meles Zenawi in conceiving the Grand Ethiopian Renaissance Dam (GERD) project and promote that of Emperor Haile Selassie.

Efforts to re-write the genesis of the dam reflect the current government’s desire to deny any accomplishments of the previous government and re-write the EPRDF-era as “27 years of darkness.”

This tendency about the dam probably first appeared in mid-2020, when a photograph captioned “Emperor Haile Selassie visiting the Nile dam project” was posted on a blog by Muluken Bekele, an entrepreneur who occasionally writes about Nile. Many blogs and social media accounts now use the photo to highlight Emperor Haile Selassie’s role.

Some international media have also started attributing the paternity of the dam to Haile Selassie.

This article analyzes the historical evidence for the claim that Haile Selassie first conceived the plans for GERD and investigates what we really see in that iconic photograph.

In the 1920s, the British planned to construct a dam at the Chara-Chara outlet of Lake Tana, as part of the regulation of the Nile water flows. These plans took place at a time when the British were emphasizing Egypt’s rights to the Nile waters over Ethiopia’s.

The aim was to have a more regular flow of water, allowing more land to be irrigated in the British colonies of Egypt and Sudan. By building a two-meter high weir, 4.3 billion cubic meters of water could be stored at the Lake Tana Reservoir and released when needed.

Diplomatically, the idea to build this reservoir was a complex issue. Aside from the British and Ethiopian governments, Italy was also involved. There were also disagreements between the British and Egyptians about the extent to which the Blue Nile needed to be controlled.

A first detailed hydrological study of the plans to dam the Lake Tana outlet was carried out from 1920 to 1921 by G.W. Grabham and R.P. Black, and was published in 1925. As the study’s authors detailed, challenges were not only political but also technical.

The problems included determining how the weir should be constructed and how to channel the water efficiently downstream towards the British territories. The upper Nile segment—between the Chara-Chara outlet and the Blue Nile falls, where the river runs and meanders across Quaternary lava flows—was planned to be rectified, including by digging a tunnel to cut off the Egirbarr meander (Fig. 1).

Despite these plans by the British, the works were ultimately never carried out.

Fig. 1 Design cross-section of channels and a tunnel suggested for construction in the 1920s along the Blue Nile downstream from the Lake Tana outlet.

Detailed exploration was initiated to build a major dam across the Blue Nile during the Italian occupation of Ethiopia that began in 1935.

The CONIEL (Compagnia Nazionale Imprese Elettriche) was established in Addis Abeba with the purpose of hydropower planning. Jointly with the Istituto Geografico Militare, they recorded aerial photographs all along the Blue Nile and its major tributary streams (Fig. 2).

The work was forcibly interrupted due to the Italian defeat in 1941.

Fig. 2 Aerial photographs of the Blue Nile gorge at Zadi (Benishangul-Gumuz) taken on 6 December 1938 by the Italian Military Geographical Institute.

In the 1950s, Britain’s approach moved towards restricting Nile’s water from an increasingly confrontational Egypt. Following the nationalization of the Suez Canal in 1956, there were high-level arguments inside the British administration over whether damming or diverting the Nile could be used as a weapon against Gamal Abdel Nasser.

At that stage, the U.S. entered into the picture. The Blue Nile investigation in Ethiopia was one of the United States Bureau of Reclamation’s (USBR) main international endeavors in the 1950s.

The Bureau’s involvement in the Blue Nile region was a mix of geopolitics, development assistance, and technical intervention.

Why Ethiopia rejected the U.S.-drafted GERD deal
by Ethiopia Insight

Given Haile Selassie’s politically effective demands for speedier and more widespread American support, the Ethiopian government’s response to the USBR’s projected development of the Blue Nile is regarded as being particularly important.

What the study achieved was to come up with suggestions for a huge layout of reservoirs in the Blue Nile basin. The USBR indicated 111 potential sites for hydroelectric power, including 25 along the Blue Nile itself.

The river segment adjacent to Mankush or Guba—some 20 kilometers upstream of the GERD site—was marked as one of the 25 potential sites, as well as reservoir areas. Most locations were not seriously considered further for reservoir construction, such as a reservoir in the main Blue Nile gorge.

In some of these locations, a dam has since been realized; in others, construction is currently underway.

However, there was no specific study or plan about building a large-scale dam across the Blue Nile except weirs like the one at the outlet of Lake Tana.

USBR gave more attention to the potential for reservoir construction in the upper Blue Nile basin, such as Finchaa in the first place, also Megech and Ribb. Even in the case of Finchaa, no particular plans were drawn up.

Only the most relevant locations were identified by the USBR study, to the great dismay of the emperor who had preferred at least one dam to be built rather than only conducting exploration studies.

Now, let us explore the photographic evidence. Was the photo of Haile Selassie on a previously unknown lakeshore really taken in the framework of the USBR study?

Doubts have arisen because: (1) on that photo there is already the presence of a constructed reservoir, (2) the landscape does not fit with the Blue Nile, and (3) many of the USBR Blue Nile Basin photographs conserved in archives are monochrome and they do not include photos of on-site visits by the emperor. Fig. 3. Reconstruction of the surroundings of Haile Selassie’s Koka palace in the 1960s.

In contrast, the topography around GERD includes river incisions into granite and metamorphic basement rocks, and the vegetation is relatively lush there.

It appears that the photo was taken from a hill overlooking a reservoir, as one can see a drawdown. This fact narrows down the possible location, given that there were only two reservoirs in Ethiopia in the 1960s: Koka and Aba Samuel.

Aba Samuel (Fig. 4) was constructed by the Italians in the late 1950s, in part as compensation for war damages. The reservoir is across the Akaki River, some 20 kilometers southwest of Addis Abeba.

The sides of Aba Samuel reservoir are less sloping, with a lot of cropland. Before it was filled with sediment, as it now is, there were always flamingos. Based on these details, we discarded this reservoir as a possible location where the iconic photo was taken.

Further details reveal that the photo was taken on the grounds of the emperor’s Koka palace overlooking the Koka reservoir, which was completed in May 1960 to irrigate the Dutch HVA sugar plantations.

The mountain behind Haile Selassie’s head in the photo (Fig. 3, in the background) was identified as Mount Yerer, which is located close to Addis Abeba. The photo was taken after 1960, given that the Koka reservoir was already filled with water.

The viewpoint in the photo (Fig. 3, top left) is just outside of the palace, in the surrounding lands where bushes had been allowed to re-grow; there are acacia trees on the edge of a cliff overlooking the reservoir.

The opposite shoreline fits well with another photo (Fig. 3, top right) that was taken overlooking the reservoir from the palace gardens.

There is a strange movement to politicize the history of plans to construct a dam across the Blue Nile and associate GERD with Emperor Haile Selassie.

Besides Meles’ initiative, Tigrayans gave a lot of money for GERD’s construction. The contribution per capita for GERD was high in Tigray, probably higher than in any other region of Ethiopia.

One Ethiopian colleague explained this situation as such: “I think the movement to associate the dam with the emperor is very well organized and it is part of the plan to erase the memory of Tigrayans’ contributions in the development of Ethiopia. It is sad but it is happening.”

It must nonetheless be recognized that there were a number of issues in relation to the construction of GERD.

These include politico-financial intrigues, negligence of the World Commission on Dams’ framework for decision-making, sedimentation, Nile basin hydro-politics, the lack of a commonly agreed Environmental Impact Assessment by the upstream and downstream countries, and possible misallocation of resources.

Probably the most overlooked factor in the whole equation is the indigenous communities.

In addition to earlier land grabbing, in recent years the GERD building works have attracted an important workforce as well as petty trade near the site and along the main roads. This has attracted more settlers to the region, further marginalizing the indigenous population.

Most significantly, an estimated 20,000 Gumuz who were living in the reservoir area and five-kilometer buffer strip have been relocated to villages along roads.

As we showed here, Emperor Haile Selassie, just like the Italian colonial planners and every other Ethiopian ruler, was enthusiastic about the idea of building a large water management infrastructure. In fact, the 1974 demonstrators in the streets of Addis Abeba chanted, “As soon as the work on the dams is done, wealth will accrue to everyone.”

The iconic photo of Haile Selassie (Fig. 3, top left) fits that purpose, as it showcases the Koka reservoir after its construction. Without a concrete planning initiative, however, this is certainly not evidence that, at that time, there were advanced plans to build a dam across the Blue Nile.

What’s beyond doubt is that the late Meles Zenawi’s role in the project is unrivaled, and it was under his watch that Ethiopia began the construction of the dam on 2 April 2011, with the main aim of producing electricity for Ethiopia and the Horn of Africa.

Main photo: The picture of Emperor Haile Selassie that got incorrectly captioned as being a picture of him visiting a Nile dam project.

Jan is a professor of physical geography at Ghent University in Belgium. He has carried out research in Ethiopia since 1994.

Kiros is a senior Ethiopian scientist. He publishes under a pseudonym for
safety reasons.

Paolo is an Emeritus Professor at the Department of Earth Sciences at the University of Ferrara, Italy. He has studied hydrology and river morphology throughout the Horn of Africa since 1983.