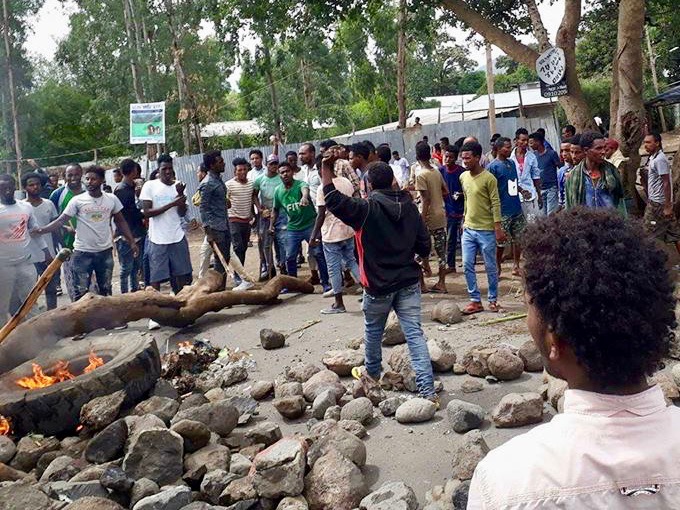 After violence in recent years over power, identity and resources rattled Ethiopia’s centre, east, west, and south, this time it is the north’s turn.

Despite its leaders being at the forefront of national politics, Tigray state had been relatively peaceful over the last few years. That was until regional police shot at least three people dead on Oct. 21 in response to protests opposing Tigrayan rule in Alamata town near the border of Amhara region.

In scenes familiar from Oromia, and to a lesser extent parts of Amhara and Southern Nations regions, youths frustrated with local Tigrayan administrators in Alamata blocked roads with burning tires, said a teacher, requesting anonymity. Regional police killed five, and then two more, with 20 seriously wounded, he said.

There have already been protests in response in Amhara towns. And the disturbance could presage a more serious conflict due to festering historic disagreements over territory between the two powerful regions and political dynamics encouraging greater assertiveness from Amhara—and a fierce defensive posture from Tigray. There is a similarly problematic dispute with Amhara elements on the southwestern border of Tigray over the Wolkait district. Both are fanned by online activists.

Officials didn’t respond to our requests

Despite the attention of Prime Minister Abiy Ahmed, there is no obvious quick resolution, as Amhara’s new breed of ruling politicians, such as regional president Gedu Andargachew, respond to popular feelings of exploitation—which some even call the “Amhara genocide”—and seek to contain threats from more aggressive opposition factions liberated by Ethiopia’s political amnesty.

For example, in an Oct. 21 Facebook post, the leader of the newly formed National Movement of Amhara (NaMA), Desalegn Chane, accused Prime Minister Abiy Ahmed and Gedu “of criminal negligence and complicity in an alleged genocide campaign against the people of Angot-Raya” A NaMA statement said Tigrayan forces deliberately attacked the Amhara people of Raya and called for the Amhara and federal governments to intervene.

Meanwhile, embattled Tigray People’s Liberation Front (TPLF) officials are unlikely to be in the mood to countenance processes such as a referendum that could possibly lead to a loss of territory and prestige. They have already ceded too much power at the federal level in Ethiopia’s political shake-up this year, and their energies are now focused on regional affairs, including managing the reopened Eritrean border.

Alamata activists have organized petitions, but local administrators told them not to promote the issue, and refused to discuss requests for the public to have their say on the question, the 35-year-old teacher said. “The officials didn’t respond to our requests and were heard saying there is no question on Raya identity. There was no room for discussion,” he said.

There are signs of militarization and mobilization of militia and special forces along the border recently as tensions build, according to Ethiopia Insight’s political commentator Alemayehu Weldemariam, who is originally from Raya but is now based in the U.S.

“The demand for recognition of the Raya distinct identity is an all-too-familiar story. But it’s always been highly contested: some claim it’s Amhara, others say it’s Tigrayan, while still others say it’s neither Tigrayan nor Amhara, but a distinct cultural group itself,” he said.

Despite the trouble in the relatively fertile Southern Tigray Zone, the destabilization has not reached proportions seen in other parts of the federation after elections in 2015 that led to the sole opposition parliamentarian losing his seat.

Popular protests in Oromia over marginalization and oppression led to more than 1,000 deaths and the destruction of countless private and public properties. The Konso people’s homeland in Southern Nations endured protests and repression over a reduction in that community’s administrative autonomy.

Unsolved and politicized territorial disputes between Somali and Oromia region contributed to extreme violence since late 2017, while Wolayta were killed and displaced in Hawassa amid a renewed push for Sidama statehood in mid-June. Nearby, there was mass displacement of Gedeo from West Guji Zone of Oromia this year.

Fighting related to resource competition struck the border areas of Benishangul-Gumuz and Oromia earlier this month. Another hitherto relatively unscathed location was the federal capital, Addis Ababa, but that suffered communal killings on its fringe in September as recently liberated opposing political factions held rallies.

In the latest in a series of mob killings, two medical researchers were killed last week in West Gojjam Zone of Amhara after a false rumor spread that they were delivering fatal injections, according to The Reporter newspaper.

Demands for greater autonomous territory from the Qemant ethnicity were violently dealt with by Amhara security forces in late 2015. That issue rumbles on despite attention from the House of Federation, Ethiopia’s upper chamber which rules on constitutional matters, and a referendum. Nominally, that issue is similar to the identity-related question in southern Tigray.

We need someone from this area to administer us

The Raya issue has not been presented to the upper House, according to its speaker. And nor, it seems, to Tigray’s Council, which is where such demands are first supposed to be lodged. However, the claim is longstanding, according to another resident.

He said locals are not campaigning to be part of Amhara, but want self-determination, which is promised by Ethiopia’s constitution. The demand, which was not influenced by outsiders, has been insultingly rejected by officials, who said Raya was the name of an ox, he said.

“There is smear campaign against us. There is high level of unemployment and other related issues. We protested demanding these problems to get attention. We waited for a long time. We need someone from this area to administer us. But nobody is listening. So we protested,” they said.

Agezew Hidaru, who has authored a political history of the Raya-Qobbo people, wrote on Oct. 24 that the protests were triggered by ethnic Tigrayan activists trying to counter the Rayan movement, as well as by the insults, and the efforts of Tigrayan special police to undermine campaigning.

In a statement on Oct. 21, Tigray region said the identity issue was being used to advance a political agenda and that violent protests were engineered to incite the police into forceful action.

“It is unacceptable to use force and illegal means to address interests in a region where legitimate and peaceful questions are heard and resolved. The regional state will not tolerate any forces who directly or indirectly involve in this act,” the statement said.

Abraha Desta, the leader of Tigrayan opposition party Arena, said the regional government should address the cause of the protests rather than using force. “The people have concerns such as governance, democracy, development and freedom. Instead of addressing these concerns, Tigray Regional Government is punishing the people,” he said in the Oct 24 interview with Voice of America’s Tigrigna service.

Abraha also claimed the ruling Amhara Democratic Party has been creating problems by using ethnic identity questions. In an Oct. 23 statement, Amhara’s government reminded Tigray’s that the Raya identity question has to be solved in a constitutional manner in consultation with the public.

A case of mistaken identity?

Since 1930, Wollo Province was the personal fiefdom of His Imperial Majesty Haile Selassie I, with Crown Prince Asfa Wossen as its governor. In 1942, Haile Selassie enlarged Wollo to include Yejju and Lasta, with Dessie as its capital. And in 1957, Haile Selassie enlarged Wollo again to include Raya, particularly, Alamata and Kobo towns, which were part of Tigray Province, according to the Historical Dictionary of Ethiopia and Eritrea by Chris Prouty and Eugene Rosenfeld and other archival records.

When TPLF-led rebels captured state power in 1991, Alamata, with a majority of Tigrigna-speaking residents, was incorporated into Tigray, while the Amharic-speaking Qobbo was absorbed by Amhara in the new multinational federation. The ‘loss’ of Alamata has never been accepted by some Amhara, who allege that the TPLF moved Tigrayans into disputed areas during the civil war, or fiddled the numbers. Mikael Arage, a Finland-based political commentator and citizen journalist, calls the 1991 process illegal, and even says Amhara are willing to go to war over the issue with Tigray, which has a population that is slightly over one-fifth of Amhara’s estimated 28 million.

“War between Amhara and Tigray regional states could break out as the call for defending and liberating ethnic Amharas in the forcefully annexed provinces of Wolkait and Raya continues as tyranny by the notorious Tigrayan soldiers exacerbates the situation,” he said, evidencing the passions accompanying the issue.

That is unlikely to happen, and any serious conflict would legitimize federal military intervention, according to Alemayehu, but the situation is problematic for the TPLF, with Alamata long having been badly governed and many administrators originating from northern Tigray. Additionally, discontent has increased recently, with allegations that Tigrayans displaced from Oromia and Amhara are being resettled in the area, he said. Some of those are Rayans originally resettled into present-day Amhara by the Derg, said Alemayehu.

“A referendum has often been suggested as a solution, but no state boundaries were originally decided by popular votes, and there is no reason Rayans cannot be a group living within Tigray like the Afar, Erob, and Kunama,” he said.

Peaceful demonstrations, albeit with some aggressive sentiments expressed, over the Raya situation occurred in towns including Bahir Dar and Dessie today and are planned for Debre Birhan on Nov. 4, as well as other Amhara locations. Government authorizations demonstrate the region’s support.

The overall movement is organized by an Addis Ababa-based group of activists, some of whom are promoting a youth movement in Raya to match Oromia’s Qeerroo and Amhara’s Fano, according to Alemayehu. It is called Siber, which means ‘break it’ in Amharic and Tigrinya.

“What they are aiming to break, it seems to me, is rule by the TPLF, but they might end up breaking the very social fabric that held the people of Raya-Qobbo together,” he said.

Solomon is a freelance journalist and Ethiopia Insight reporter. He used to work for Addis Fortune newspaper.

Kibreab Beraki is an economics graduate based in Mekele. He's been a data analyst for NGOs and worked with the international media.