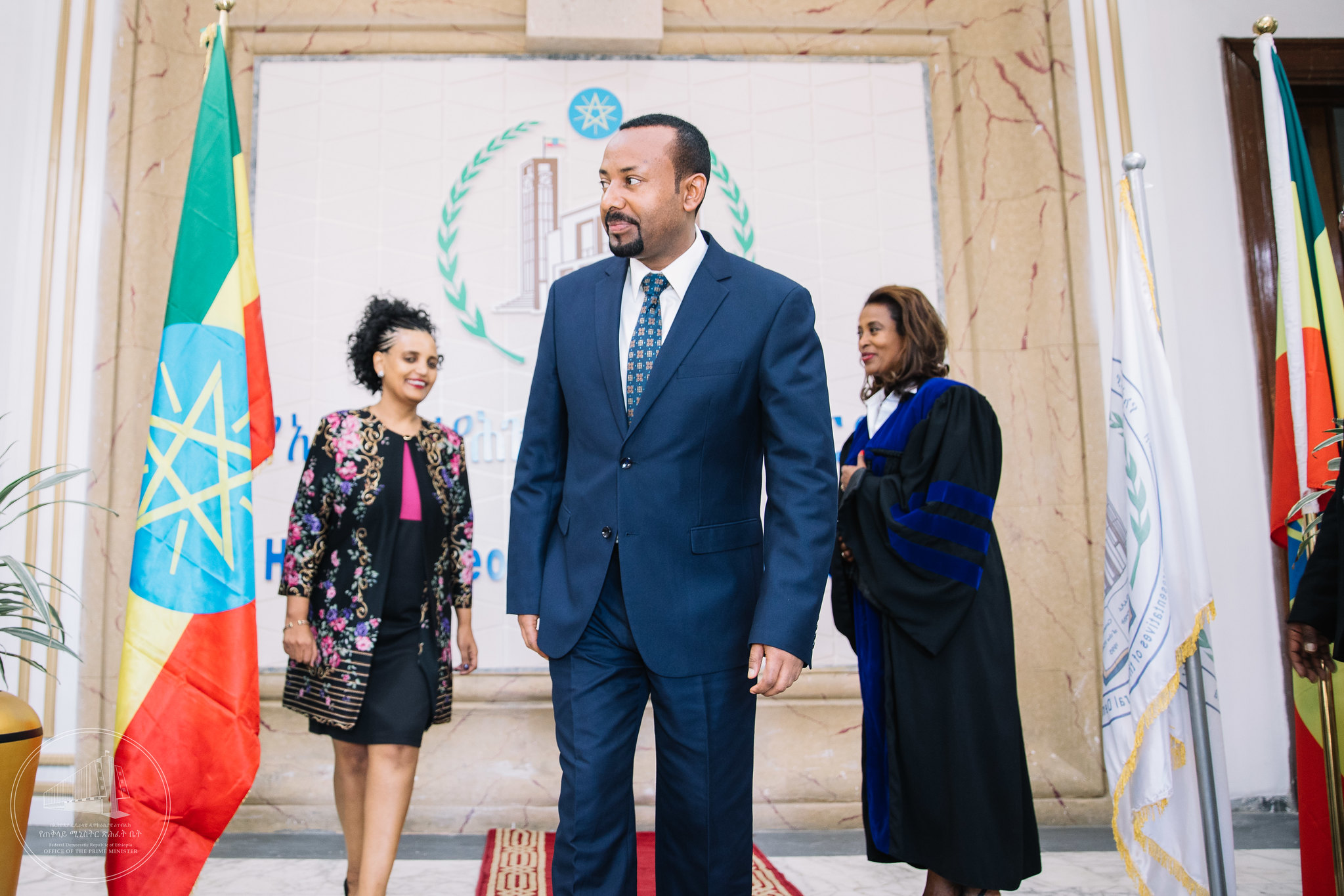 To end paralysis, the political landscape needs to be restructured along clear ideological lines, and resurgent grassroots democracy must smother elitism, starting with local elections.

It is crystal clear that the still burning question in Ethiopia are the horizontal ties between “nations, nationalities and peoples” and their vertical relationship with the federal government. In other words, it is still the “question of nationalities”, as it has been since Student Movement activist Wallelign Mekonnen put pen to paper in 1969.

Berhanu Nega’s liberals occupy one pole. Seven parties have merged to form the Ethiopian Citizens Party for Social Justice (In Amharic, Ezema). It advocates “citizen-based politics”. If it could rewrite the constitution, it would open with “We the people”, and not “We the nations, nationalities and peoples of Ethiopia”. Demarcation of regional states would be on a geographical and not ethnic basis, and the central power strong.

Opposite are hardline ethnic federalists who want a loose union of quasi-sovereign states, or full autonomy for ethnic regions. Its most radical proponents believe in “consociationalist” federalism, in which states are equally represented, regardless of their population sizes—as occurs now in the EPRDF; to Tigray’s benefit because it has only six percent of the population. In this system, central key decisions are only taken if there is consensus, which gives each state a veto. There are strong ethno-national parties in Tigray, Somali, Oromia, and, most recently, Amhara.

The official stand of the parties ruling the most populous regions, and whose alliance brought Prime Minister Abiy Ahmed to power, positions them in the middle of this spectrum. One of the main obstacles to the Amhara Democratic Party (ADP) and Oromo Democratic Party (ODP) effectively leading at the national and regional level is the tension between them, but there’s also their heterogeneity: chunks of their leadership and membership have more ideological affinity with the National Movement of Amhara (NaMA) and Oromo Liberation Front (OLF). The rank and file as well as party cadres have de facto joined these groups, meaning there’s minimal ruling party control of swaths of Oromia and Amhara.

EPRDF as we know it is probably beyond repair

The paralysis of EPRDF, and consequent power vacuum and troubled transition, are not only due to the friction between its components but also, and perhaps primarily, down to the rifts inside three of them (TPLF seems more cohesive, at least for now). To overcome the crisis, the political landscape must be reconstructed to lay over this new spectrum.

The EPRDF as we know it is probably beyond repair. As Somali Region President Mustafa Omer rightly said, “the way to go forward would be to transform EPRDF from a Front into one party”; thus, a national de-ethnicized party, which Abiy Ahmed would obviously lead. TPLF, however, has made clear it would consider this an intolerable attack on its conception of the federal system. But while hunkered down in Tigray for now, TPLF has to re-engage nationally to lead the construction of the hard ethnic federalism pole in order to ensure its top priority: a strong, autonomous Tigray. Its experience, organization, and clarity of vision make it the only organization that can perform this task. For months Tigrayan websites have called for this decisive step.

It is probable that this reordering will stir plenty of ODP and ADP members to rally behind OLF or NaMA, and, for some Amhara, Ezema. This reordering will clarify new alliances and, more importantly, who is where on this evolving spectrum. Last but not least, by linking each party to an unequivocal political line, particularly ODP and ADP, this would homogenize them, and so make them more assertive and functional. This is a prerequisite for the effective national dialogue needed to overcome the impasse, as a party leadership cannot effectively bargain without a clear stance backed by its membership.

The second scenario stems from the pervasive elitism of Ethiopian society. The upper classes are still convinced they are indispensable, as the only ones who could possibly lead the country. The people, willingly or coerced, must simply follow. This is true for this supposed democratic transition, as shown by the preoccupation with a so-called “grand elite bargain”. But why should democratization be the exclusive preserve of the elite? Would it not be appropriate for it to be also driven from the grassroots? There is, after all, a strong tradition of capable local self-rule in Ethiopia.

Oromia has its well-known Gadaa system and in the old Ethiopia prior to the 1974 revolution, the basic administrative and social entity, the parish, was largely governed by a kind of strong “communal qualified democracy”. A tacit deal existed with the mengist and the people. As long as the latter paid taxes, maintained order through militia, and sustained imperial forces when they visited, they could rule themselves with minimal interference from higher authorities.

They were sovereign on matters as important as how the tax burden was spread between different households, with the amount fixed by the district for the parish as a whole. The parish also managed land distribution and resolved disputes, because appealing to a judge was a last resort due to cost and risk. The parish even decided the land tenure system. For all these decisions, people were elected to various committees. The symbol of this sovereignty was the village assembly, usually held after the Sunday religious observance. The decisions were quasi-systematically taken by consensus.

The head of the parish, the lowest state official, was appointed from above. But he was commonly chosen from the “big men” of the parish, usually elders, either respected priests, or successful farmers. A researcher who studied a village at that time noted “a representative of the central power can govern only by building a legitimacy based on the creation of supporters through reciprocal obligation”. The appointed head of the parish had authority, but the power belonged to these big men. They had to compromise with each other.

Local elections would set the transition in motion

That was the first limit of this “communal qualified democracy”. In addition, while any household head, male or female, was entitled to take the floor during the parish meeting, married women and most of the craftsmen were excluded. Patron-client relationships were the foundation of social stratification because the majority of the peasants needed to be helped. In the decision-making process, the latter had to support the positions of their patrons, yet a client dissatisfied with his patron could find another one. This is what made it a kind of qualified democracy.

This “communal citizenship” reached its peak in the few years after the 1974 downfall of Haile Selassie’s regime and before the Derg’s consolidation of power. The implementation of the fundamental land reform of 1975 was entrusted to newly formed Peasant Associations, and they fulfilled their responsibilities successfully. But autonomy vanished when the Derg asserted control of the associations.

Arguably, the EPRDF intensified this process, producing the 1 to 5 apparatus for total control of the population. In 2008, it introduced the 300 candidates requirement for local elections, with the clear intention of making it virtually impossible for the opposition to compete. The thirst for communal power is strong with a key aim being to relax the EPRDF’s iron grip, and this is even more so among the young, who were at the forefront of the unrest. Currently, the party’s has largely faded: in numerous areas, local authorities are so delegitimized that they are authorities in name only.

The issue of local elections has been shoved to somewhere near the bottom of the political agenda. Yet one of the main gripes of the rural population is rightly that nothing tangible has changed—so this elite prioritization seems misplaced. From a technical point of view, local elections are easier to organize, and measures could be taken to reduce entry barriers for independent and opposition candidates. In addition, they may be less subject to violence, as they would be largely disconnected from the prevailing political partisanship, particularly at the kebele level: the voters will choose their representatives not primarily according to party loyalty, but more based on their social position and reputation in the community.

Given the current deadlock, local elections would set the transition in motion and mark an important step forward. They would serve as a springboard for national elections, and be an important first tangible goal along the route to a new political settlement. The day-to-day life of ordinary people would change with the establishment of a local democratic space after it was neglected for more than four decades. New, more legitimate kebele leaders will improve security: purposeful leadership of hundreds of thousands of militia could tackle the petty crimes poisoning daily life. In addition, almost all agricultural development studies on Ethiopia highlight the need to “empower” farmers in order to boost their productivity.

Could these two proposals see the light of day? Well, that depends on the whole political class starting to assume its responsibilities, and acting in a far-sighted manner.

Ethiopia Insight and openDemocracy are pleased to publish the author’s articles jointly.

Main photo: Prime Minister Abiy Ahmed with, left, Birtukan Mideksa, head of the electoral board, and Meaza Ashenafi, the President of the Supreme Court; November 22, 2018; Office of Prime Minister