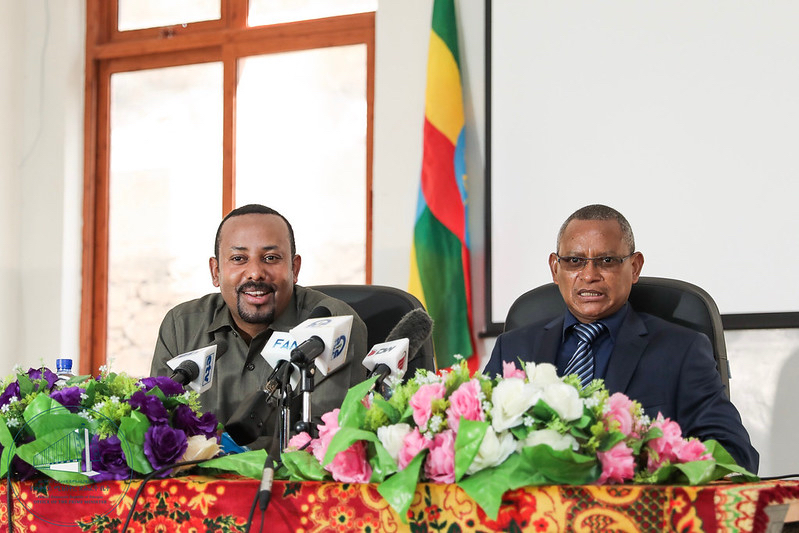 Ethiopia’s post-1991 political order was primarily the construction of an alliance of four ethnic parties—but this was never a coalition of equals. The Tigray People’s Liberation Front (TPLF) had significant control over the birth and development of the other members of the ruling front.

Over the last three years, the Oromia and Amhara parties, under the stewardship of the TPLF for more than a quarter of a century, escaped TPLF control, aided by popular protests that swept the two regions. A member of that elite revolt, Abiy Ahmed, came to power in 2018, and generated hope and optimism. But the prime minister also faced wide ranging challenges that have become existential for the country.

His promise to bring full democracy is being seriously tested by forces within the ruling alliance and outside. TPLF opposes Abiy’s approach after he reduced its federal power. But despite this, TPLF maintains the loyalty of most Tigrayans. The reason is that trust between key political actors has evaporated, with Abiy at the centre of the unfolding drama. Many Tigrayans side with TPLF elites rather than a new leader in Addis Ababa who is associated with anti-Tigrayan sentiment.

Tigrayans’ liberation struggle was against repression and discrimination. However, soon after the freedom fighters seized state power many turned into oppressors. They found it difficult to share power. Allowing others to win in credible elections was apparently deemed unacceptable. All dissenting voices—including their own comrades—were suppressed, both at the regional and federal levels.

Yet still, decades on from the start of such controlling behaviour, the TPLF commands loyalty in Tigray. This is not because TPLF lifted Tigrayan farmers out of poverty. According to a government report in 2018, Tigray was still the poorest region in the country in 2015-16. Instead it is because TPLF has succeeded in maintaining its positions as the only defender of Tigray. It creates a siege mentality among the population, reproducing the oppression they faced under Amhara feudal rulers.

Opposition actors also play a role in exacerbating the problem by carelessly allowing their dislike of TPLF to be perceived as anti-Tigrayan animus. This allows TPLF officials to use the Tigrayan people to insulate themselves against their adversaries in the ruling party and opposition. This is not new: ordinary Tigrayans sustained the TPLF throughout its insurgency.

The Republic of Tigray? Aydeln, yekenyeley!
While the reasons for the re-emergence of Tigrayan secessionism are apparent, the rationales of its proponents are far less compelling.

The anti-Tigrayan sentiment is partly the product of TPLF’s disproportionate control of the economy, security apparatus, and central government. Tigrayan elites thus, to some extent, rely on ethnic solidarity to protect their economic privileges. Each time the anti-TPLF mood intensifies, it makes them more loyal to TPLF—even if they disagree with the party ideologically.

As anti-Tigrayan propaganda creates insecurity among Tigrayans, TPLF plays on it. It  tells Tigrayans that Abiy’s alliance with “chauvinist” Amhara is a repeat of the discrimination and humiliation Tigrayans faced under Amhara emperors and lords. This isolates Tigrayans from other Ethiopians, but it also allows TPLF to act as protector, once again.

One of TPLF’s persistence weaknesses is its inability to coexist with rivals: it must either subordinate them to its interests or remove them from the political scene. TPLF excluded opposing organizations and individuals who did not participate in the liberation struggle. For example, groups such as the Ethiopian People’s Revolutionary Party (EPRP) and the Ethiopian Socialist Movement known as MEISON were barred from the transitional government.

Even alliances were short-lived, except with junior partners. The Oromo Liberation Front, for example, was soon ousted from the transitional government because of its refusal to comply with TPLF demands. After Abiy cut it down to size last year, TPLF retreated to regional capital, Mekele, and acted defiantly; some would say sulkily.

Instead, TPLF should develop the ability to coexist with adversaries, embracing peaceful competition. One of the virtues of democracy is tolerance, the ability to live with rivals, even if in defeat. Tolerance helps build a democratic Ethiopia that will accommodate all of us. Cultivating this new political culture is difficult, but it is less costly than trying to vanquish real and perceived adversaries.

TPLF has long-presented its liberation struggle as a justification for power. This created an unhealthy sense of entitlement and encouraged repression to maintain this supposedly just arrangement. But now, it is evident to all that this mentality led to opposition that dethroned TPLF. It is time to change. The game is up.

On the other side of the coin, the common anti-Tigrayan rhetoric enhances Tigrayan insecurity and makes even Tigray’s progressives TPFL loyalists. Some of Abiy’s remarks—”daytime hyenas”, infamously—are often cited as evidence. Abiy also denied the importance of TPLF-led infrastructure growth, saying that the past 27 years have been dark years. This was counter-productive.

When in Tigray, it seemed to me that most Tigrayans perceived criticism of TPLF as a personal attack. These dynamics will further rock Ethiopia’s transition if not addressed. It is necessary to freeze anti-Tigrayan rhetoric and create a situation where six million Tigrayans feels safe being ruled by TPLF opponents.

Is Tigray really a drop in the bucket for Abiy's administration?
Many Tigrayans are wondering why the Prime Minister took such a sharp turn against their region. A move they believe undermines his welcome reform agenda.

As TPLF resist Abiy’s rule, he flexes his muscles against the party, upending its 30-year-old alliance. This enhances tensions between TPLF and the ruling parties of Oromia and, especially, Amhara. Trust and confidence evaporate further, with Abiy under increasing pressure.

The prime minister’s merger of the ruling coalition aims to consolidate his power while pushing rivals further from the centre, replacing them with less influential actors. This is just another zero-sum elite game—and not one which Ethiopians can afford to play.

Instead, the authorities and the opposition must develop a sustainable and constructive strategy that incentivise TPLF to cooperate, while they also urge Tigrayans to maintain solidarity with other Ethiopians so they can all collectively honor the objectives of their brave martyrs.

Aug. 7, 2019 Ethiopia and Eritrea’s peace must be rooted in past

Jan. 17, 2019 Is Tigray really a drop in the bucket for Abiy’s administration?

Mebratu is a doctoral researcher at the Centre for the Study of Democracy at the University of Westminster in the UK. Follow him on Twitter @MebratuDugda