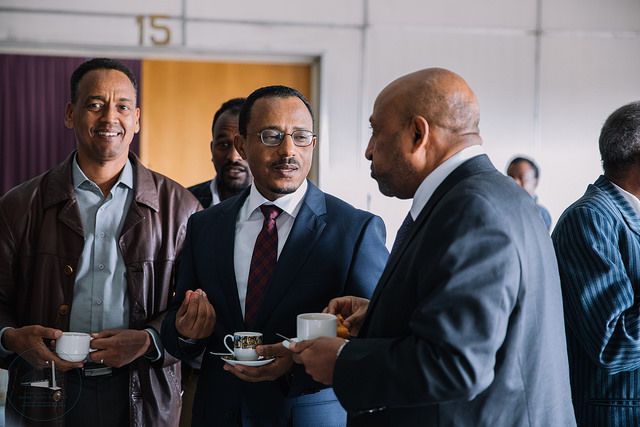 As Lemma Megersa has shown, for ethno-nationalists, there will never be the right time for multi-ethnic politics or prioritising national unity

In an interview with VOA on November 30, Lemma Megersa announced that he disagrees with the decision to form the new multi-ethnic party, the Prosperity Party (PP), the political project of Prime Minister Abiy Ahmed.  Lemma had previously vowed that only death will separate him from Abiy, a friend, a political ally, and a comrade in arms, but his announcement marks a major split with the Prime Minister.  The rupture could result in the reconfiguration of alliances among Oromo politicians and parties, the consequences of which is difficult to ascertain at this time for Ethiopia.

Lemma is a former president of Oromia. He was the vice-chairperson of the ruling Oromo Democratic Party (ODP), is the Minister of Defense, and more significantly was the leader of Team Lemma that was instrumental in reducing the Tigray People’s Liberation Front’s (TPLF) influence in the federal government through years of political insurgency. He is admired by Ethiopians for the critical role he played in the downfall of an authoritarian regime. He also became the darling of some of the more stridently nationalist Oromos.

He outlined his reasons for rejecting the new party on substantive and procedural grounds.  He is skeptical of the “philosophy” of medemer, broadly translated to mean unity to achieve a goal, because the ODP has failed to unite the Oromo people, he asserts. He suggests it was not the right decision at this time to promote unity among Ethiopians when the ODP has not succeeded in uniting and serving the Oromo people.

This argument is unpersuasive.

First, unity is purpose-specific.  Unity implies agreeing on an objective and acting to attain it.  There can be no unity without a purpose. A group of individuals, communities, or political parties can agree on a specific issue but may disagree on other issues. For example, last September, ordinary Ethiopians, politicians, community leaders, the opposition parties, and the government were all united on the “green initiative” to plant trees across Ethiopia.

Ethiopians, Oromos and non-Oromos alike, are united on the need for establishing democracy in Ethiopia; most Ethiopians also agree on national unity, mutual respect of each other’s cultures, and the territorial integrity of Ethiopia. There is no disunity between Oromos and the rest of Ethiopians on these issues. On other issues, for example ideology, there could be deep differences of opinion among Oromos as much as there is among other Ethiopians. This difference explains the presence of multiple parties in Oromia. Therefore, the emphasis on an abstract unity among Oromo people first is political posturing without substance.

Second, Lemma’s statement is all the more disappointing when we consider he had appealed in the past for unity among Ethiopians to establish democracy, to strengthen national unity, and to defend the territorial integrity of Ethiopia.

His concern about unity among the Oromo people first is a 180-degree turn from Ethiopian nationalism that he equated with an addiction. Addiction or not, civic nationalism, based on common rights and obligations, unites all citizens; it does not preclude unity among the Oromos. Indeed, a united Ethiopia for justice, equality, and democracy also creates a united Oromo people for the same objectives. The sequential approach to building unity that he advocates is a fallacy.

That is why this group has been disingenuously campaigning against all multi-ethnic parties, including PP, saying such parties will re-establish a unitary state that tramples upon the rights of ethnic groups in Ethiopia, the establishment of a dystopia. Mustafa Omer, the acting president of the region of Somalia, has eloquently rebutted this fallacious argument.

No threat to federalism

He argues that a multi-ethnic party poses no threat to federalism. He finds it ironic that the defenders of the previous government, such as the TPLF, allege that creating a multi-ethnic party threatens federalism and the transition to democracy. Contrary to what they claim, the previous government, he maintains, was neither democratic nor federal. It was an undemocratic unitary government, federal in name only, under the tight control of the TPLF. He points out that in the EPRDF government, individuals from the so-called developing regions—Afar, Benishangul-Gumuz, Gambella, Somali and Harari—could never aspire to become the prime minister of Ethiopia. They were treated as second-class citizens in their own country.

Given Ethiopia’s regional, cultural, and ethnic diversity, he underscores that the consensus on the best form government for Ethiopia is federalism, and any attempt to impose a unitary form of government will be rejected by Ethiopians. He is not worried about a multi-ethnic party establishing a unitary state.

Lemma opposes the creation of the multi-ethnic party both on principle and timing. Even if one were to agree on the need for such a party, he argues that this is not the time to form a new party; this is the time is to establish peace, security, and law and order in Ethiopia.

But, lawlessness in Ethiopia today is the result of 28 years of ethnic parties, ethnic politics, and ethnic federalism. Ethno-nationalist individuals, groups, and ethnic parties have also been active in creating instability in Ethiopia during the last two years. Retaining the regionally dominant ethnic-based parties will not solve Ethiopia’s political conundrum; on the contrary, it will heighten the political crisis to such a point that the country may disintegrate. Establishing a multi-ethnic party that enjoys widespread support throughout Ethiopia can mitigate against the crisis.

Lemma also argues that since Ethiopia faces a number of serious macroeconomic problems, attention should focus on solving these problems, not on forming a new political party.  This is another red herring. Ethiopia’s macroeconomic problems, whether it is high unemployment, chronic balance of payments deficits, the high inflation rate, or the high cost of living, cannot be solved overnight. Addressing this problem successfully requires Ethiopia’s economic transformation, and economic transformation requires peace, security, and political stability.  If the past is any lesson, ethnic politics practiced by ethnic parties has created political instability and undermined economic transformation.

Lemma’s position is inconsistent with his past view on the national question.  When he was struggling against the TPLF-run security state, he contended that in Ethiopia there was no national oppression, but only class oppression.  The EPRDF concludes that it has successfully resolved the national question. Whether we take Lemma’s premise or the EPRDF’s conclusion, there is no need for ethnic parties.

Oromos must seize historic opportunity
Now that oppression has finally ended, Oromo political leaders need to set aside their grudges and work together to build on a historic moment.

The more hardline Oromos see an Amhara conspiracy, as they pejoratively put it, a Neftegna conspiracy, in every decision that the Abiy government makes that they disapprove of, whether it is the celebration of the New Year in the Palace, the reading of a poem by a child at the celebration, the inauguration of the Unity Park, or the formation of the new party.  They allege that the Prime Minister’s advisers are all Amharas, contrary to the facts.

Lemma partially legitimizes these conspiracy theories when he says he questions the motive behind creating the new political party, when he alleges that his influence has diminished, and when he protests that “I begged, but nobody is listening to me anymore”.

Procedurally, he raises the legitimacy of the process that was followed in creating the new party.  He has every right to question the process used in creating the PP, but those who participated in the discussion at different levels and in committees, for example the PP Oromia spokesman Taye Dendea says that at no time did Lemma express his disagreement either with the process or the substance of forming the new party. In fact, the government has released a picture of him voting for the creation of the new party at the meeting of the Executive Committee of the EPRDF.

Lemma says that the ODP should have consulted the Oromo people before deciding to form the new party. This is unpersuasive. It is not necessary to seek the opinion of the people, the blessing of the elderly, or the approval of Jawar Mohammed when forming a new party. The public will have the opportunity to pass its judgment on the party by casting their ballots during the election.

To understand the motivation behind his announcement we must understand the political situation today. The ‘Oromara’ alliance that was influential in removing the TPLF from power is on life support, if not dead. Abiy’s popularity has substantially decreased, especially among the Amhara people, because of his attempt to placate fervent Oromo nationalists like Jawar.

The Oromia Media Network, owned by Jawar, has intensified its anti-Amhara, anti-unity, and anti-Ethiopia propaganda over the last couple of months. For example, in its news cast on November 28, it interviewed a number of people who expressed fear that the PP will result in the creation of a unitary state. Even Daud Ibsa, the leader of the Oromo Liberation Front, has become concerned and distanced the OLF from tactics that pit one ethnic group against another.

More significantly, there has been a seismic shift in the alignment of political forces over the past year or so. The TPLF era has ended.  With the dissolution of the Ethiopian Peoples’ Revolutionary Democratic Front (EPRDF), the subservience of the other ethnic political groups that were part of the EPRDF coalition is over. So, the TPLF is possibly set to ally with the hardline nationalist Oromos to create something more like a confederation of ethnic states than a united federation. On the other side, a strong pro-unity block, including the Prime Minister, the economic and political elites of almost all the ethnic groups in Ethiopia, (including the Tigrayan economic elite), has emerged.

Six causes of transitional trauma
For a number of fundamental reasons, there is almost no prospect of a swift and painless democratic transition in Ethiopia.

The political leaders from the so-called underdeveloped regions, particularly from Somali, are playing an important role in shaping the trajectory of the pro-unity alliance, as are other political elites from various ethnic groups who worry about the prospect of ever-increasing ethnic tensions.

This fundamental shift in the alignment of political forces threatens the TPLF and Oromo hardliners. It is in this context that Lemma announced his opposition to the formation of the PP. Lemma says that he will stay in the new party and continue his struggle from within unless he is pushed out. He also declares that after consulting the Oromo people on what they want, he will take the next step.  “Consulting the public” is a stock phrase that politicians use to justify any action they take, but his statement sounds like an indirect threat.

Similarly, “what the people want” is a nebulous term subject to the politician’s own interpretation; it could mean anything ranging from ending poverty, to self-rule, to independence.  He has chosen to remain ambiguous.  If Lemma opposes unity and the new party so passionately, he should have the courage of his conviction and resign from the government.  If he continues to publicly denounce the new party, the Prime Minister should fire him. Since the TPLF has also rejected the PP, all of the remaining TPLF federal ministers should be fired as well. Internal dissent is tolerable, public denunciation is not.

Ethiopians who are concerned about democracy and national unity must support the existing or new multi-ethnic political parties like the PP, regardless of the political differences they may have with the Prime Minister. Ethiopia’s survival is at stake.

Worku is a professor of economics at Dawson College, Montreal, Canada. He did his graduate studies in development economics at McGill University; currently he is doing research on child labour in Ethiopia.