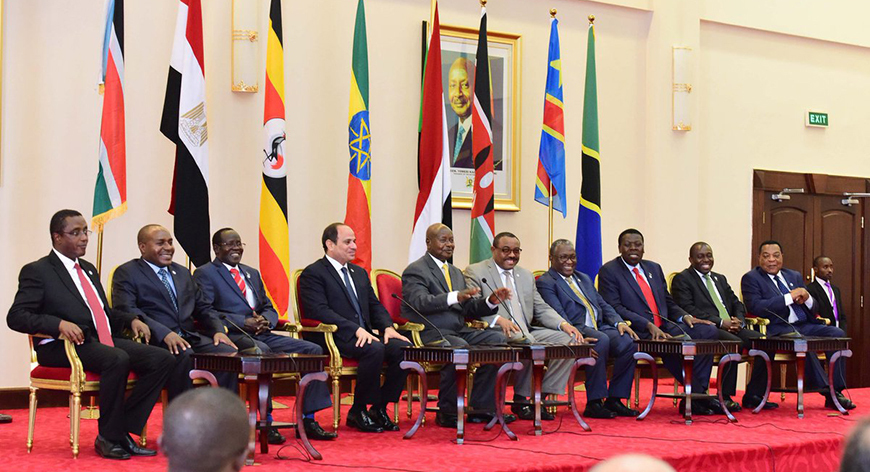 Beyond the debate over Ethiopia’s Blue Nile hydropower dam, we have to think big to productively share our precious shared resource

To proceed forwards, we often have to look backwards.

In 2,500 B.C, the world witnessed its first legal agreement of any kind being made—an agreement on the use of the Tigris river. It was concluded between the two Sumerian city-states Lagesh and Umma. The treaty, tagged the Treaty of Mesilim after the king who facilitated it, was literally carved in stone in the Sumerian writing system cuneiform.

The accord came about because Lagesh and Umma were disputing the use of river Tigris and related border issues due to a contested irrigation canal.  Eventually, King Mesilim, a prominent leader of neighbouring city state, Kish, mediated this treaty and came up with a comprehensive agreement.

The agreement included land-lease and annual tenancy fees, and a crop-sharing scheme for land that was cultivated by Umma in Lagesh territory as part of mechanisms for water allocation. This treaty, an early example of the mutual benefits of cooperation, also established the borders between these two states along the coveted canal.

However, the Umma kingdom breached the terms by not paying their tenancy debts, resulting in the world’s first known water war in 2470 B.C.

The world now favours equitable and reasonable use of a shared watercourse while placing emphasis on causing no significant harm and cooperation. The most notable articulation of these principles can be found in the Helsinki rules adopted in 1966, and later in UN 1997 Convention on the Law of the Non-navigational Uses of International Watercourses.

These factors include natural endowments and contributions of riparian states as well as current and potential demands of each riparian states as determining factors for water allocation. In addition, it goes on to state that all factors should be considered together according to the importance to riparian countries to reach at an equitable allocation on a basis level.

In plain terms, the 1997 convention states that equitable use should be determined by considering the above factors and the weights that countries would give to them. Contextualizing this notion to the Nile, it is clear that if we are to redistribute its water between riparian countries, the share of Egypt and Sudan would be nowhere close to the arrangements in their infamous 1959 treaty.

Under no imaginable equitable scheme would Egypt get 66 percent of the Nile waters and Sudan get 22 percent while the other riparians get 0 percent (the rest evaporates). This explains Egypt’s efforts to hold on to these outdated, skewed agreements, despite the chatter of not being against equitable use of the Nile.

It should be noted, however, that even under the best-case scenario, where we have equitable redistribution, Egypt and Sudan will not suddenly start using less water. The water in the Nile is already accounted for—there are millions of people, homes, communities and thousands of industries dependent on it already. It is also expected that demand in the basin will outstrip supply by 2040 unless we have proactive sustainable water management in place. It is therefore imperative to find a way of supplementing existing needs without impacting the needs and rights of others.

This is where redistribution of the water based on the principles of equitable and reasonable use takes centre stage. Once we know how much water each country is entitled to based on the factors mentioned above, there are numerous ways we can move forward without jeopardizing livelihoods.

Assuming we know the fair water shares of all riparian countries, it is evident that not every country will utilize its allocated water share, at least not immediately. Some countries would need more than their share while other countries would not use the totality of that share. This can be seen in the current situation of Sudan and Egypt: while Egypt uses more than its “allocated share” of 55.5 billion cubic meters (BCM), Sudan does not use its “share” of 18.5 BCM and the unused water goes to supplement Egypt. Here is where the concept of water trade comes in. By pricing water on a regional basis, we can have countries with water surplus sell their excess to countries in need, fostering economic integration.

Experiences from the European carbon trade can be used here. The European Commission set a cap on the amount of greenhouse gases emitted by multiple sectors with the aim of reducing emissions. The EU scheme allows for trading of “carbon credits” where companies with lower carbon emissions can sell their saved carbon allowances to companies over their emission limit.

The concept of virtual water trade—trading the water embedded in commodities—is one way of overcoming global water scarcity, including in the Nile basin. The idea is countries which are rich in water can export their water virtually to water scarce areas by trading commodities. For example, instead of growing cotton, a water-intensive crop in a water-scarce area, the idea would be to grow the cotton in a water-rich spot and export it to the drier location.

This can be extended to hydropower and food production. Instead of building a hydropower dam in stifling lowlands where evaporation loss is high, hydropower would be produced in a cooler area, and the energy exported to where it is needed. By trading commodities, primarily energy and food, we are essentially trading the water embedded in these products.

This proposal requires thinking big and considering the whole Nile basin as an economic unit and capitalizing on its resources. This means countries pursuing their interests through more cooperation, and less competition. The basin is endowed with significant hydropower, irrigation, fishing, and navigation potential. By investing in these resources at basin-wide scale and virtually trading water through other resources, we not only free more water for other non-tradable services, such as domestic use, but also save so much water that would otherwise have been lost to the inefficiencies.

Current water use in the Nile basin is extremely inefficient. Seepage from watercourses and dams is significant, especially in Egypt and Sudan where open irrigation canals are common. By investing on increasing the inefficiency and reducing waste we save so much water which can be used for other purposes.

Concerted environmental conservation endeavours by all riparian countries—in order to increase the water stored in the basin and to reduce pollution and enhance the ecosystem—is necessary for sustainable use. In conjunction with this, we must create a water-conscious population, one which knows the value of water and uses it judiciously, by starting with kids, enforcing water-conservation measures, and promoting water-saving practices.

Because we do not have a basin-wide integrated use approach in the Nile Basin, countries try and maximize individual benefits and hence many water-related investments in the Nile basin are not ‘smart’. We lose a staggering amount of water because of choices which are not water smart, such as growing water-intensive crops or building a large reservoir in the desert. Such projects result in immense losses because they are not water-smart decisions and only serve narrow national agendas.

However, integrated water-resource management, such as storing water in places of low evaporation, capitalizing on suitable irrigable land where appropriate, investments in conservation and water-storage enhancement practices upstream on the head waters of the Nile, are critical for ensuring the Nile is a sustainable resource.

The fact of the matter is the Nile only has so much water. With the above-mentioned practices, we can stretch and extend the hand of the Nile—but it can only be spread so far. It is important to explore other sources to supplement it. Rainwater harvesting, groundwater recharge, wastewater reuse, and alternative sources such as desalination are worthy avenues to pursue.

It should be noted that these recommendations are not silver bullets, but rather starting points to flex our imagination. Arguments that have to do with ensuring self-sufficiency on a national basis are bound to pop up against many of these recommendations. However, in this growing world of increasing interdependence and growing scarcity, leaning on each other seems to be the way out for everyone; while a colossal crisis will surely come to pass if we unilaterally choose narrow conceptions of self-interest.

These are long-term ideas which require considering the basin as an economic unit and achieving basin-wide collaboration to maximize benefits. This however requires significant regional economic and political integration as well as good will from the basin states to move forward. As things stand now, the discussions in the Nile Basin are focused on the GERD.

Why Ethiopia rejected the U.S.-drafted GERD deal
By Ethiopia Insight

The GERD is a significant project and negotiations should proceed, considering international laws and compassion for the people on the ground. This would mean coming up with an agreeable filling and annual operation scheme without the baggage of water allocation. While it looks unlikely that an agreement would be reached by the time Ethiopia says filling will start in July, the resumed tripartite talks can potentially produce nuanced arrangements which would appease all three parties.

The GERD is a flagship project on a transboundary watercourse and can pave the way for enhanced collaboration throughout the basin. However, the discussions should zoom out to a progressive dialogue on an inclusive basin-wide water-allocation arrangement, which the Cooperative Framework Agreement is designed to be, and other ways to move forward.

Issues related to sharing a transboundary water are not unique to the Nile. We have seen that the history of transboundary water management goes back to near the start of human civilization itself. There are so many elements we can learn from this ancient Treaty of Mesilim: cooperation and good will, mediation, good neighbourliness, as well as the terrible cost of zero-sum narrow-minded thinking—war.

The ancient Sumerians came up with mechanisms like trade and compensation as ways to get around the use of scarce resources. We can definitely do better. The modern world is not lacking precedents on how to move forward; rather it’s missing goodwill and farsightedness. We have lessons and examples to learn from dating back millennia. It is up to us to step up and stand on the shoulder of giants and leap forward together.

Mekdelawit is a civil engineer and an environmental scientist working on water science research and Nile-related studies. She is an independent researcher and can be reached at mekdelawitmessay@gmail.com